Although the Glasgow Assay Office records are lost, the Edinburgh and Dublin Assay Office databases each include an A5M incuse mark. The punches were registered on 3 March 1931 and 17 September 1934 respectively. The registrant who entered the marks is recorded as J Veron [sic] Grauer & Company [Watch Importers] La Chaux de Fonds, Switzerland. From this evidence and the unique nature of the marks, it can be inferred that all the sponsor's marks consisting of the initials A and M stamped incuse with no surround and with a number or symbol between the letters were entered at the Glasgow and other assay offices by Véron Grauer & Company. The same company also entered a number of sponsor's marks consisting of the letters J and W separated by symbols such as trilobes and swastikas.

The number or symbol between the letters may have been used for administrative purposes, to identify which manufacturer each watch case belonged to. Recently a gold watch case with Glasgow import hallmarks and the sponsor's mark A9M has been seen with the Poinçon de Maître the Swiss watch case making company C. R. Spillmann & Co SA. This suggests that Véron Grauer used the A9M mark to identify cases made by C. R. Spillmann & Co SA.

To further this aspect of the research, if you have a watch case with British import hallmarks, a Swiss Poinçon de Maître and the sponsor's mark is the letters A and M, or the letters J and W, separated by a number or symbol, please get in touch.

The section reproduced below is from my page about Sponsor's Marks. 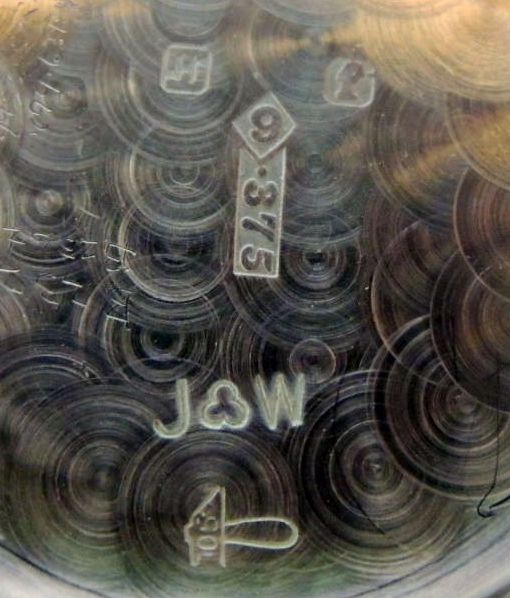 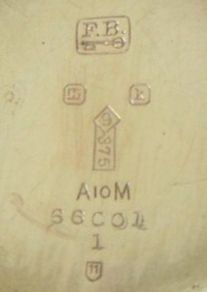 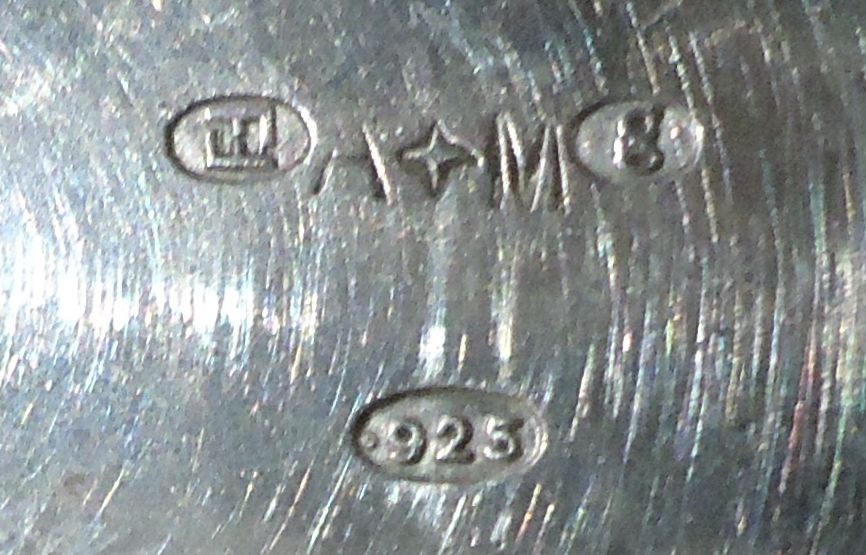 Examples of A2M, A5M, A9M, A10M, A11M and A✧M have been seen. They are all similar in style, made with by incuse punch with no surround.

If you have a watch case with one of these sponsor's marks, either A(number)M, A(symbol)M, or J(symbol)W, or something else along these lines, I would like to see a photograph please!

Although the Glasgow Assay Office records are lost, the Edinburgh and Dublin Assay Office databases each include an A5M incuse mark with no surround. The punches were registered on 3 March 1931 and 17 September 1934 respectively. They were entered by J Véron Grauer & Co of Geneva, carriers and assay agents. This company transported watch cases to Britain, submitted them for hallmarking and then returned them to Switzerland to be finished. 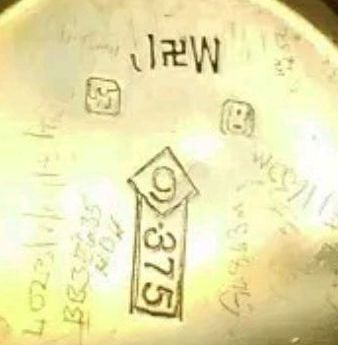 It is known from surviving Glasgow plates bearing registered punch marks that at least 22 similar punches were entered at the Glasgow Assay Office with the initials JW stamped incuse with no surround and with a symbol between the letters such as a heart ♡, diamond ♢, triangle △, square ▢, equals sign =, swastika 卍, etc, etc.

The image shows one of these sponsor's marks with the swastika 卍, an ancient religious icon. The case has Glasgow Assay Office hallmarks for nine carat (·375) gold, the date letter is the "g" of the Glasgow hallmarking year from July 1929 to June 1930.

The Dublin Assay Office records include a sponsor's mark of J W incuse with a trilobe symbol between the letters, the same as the one shown in the image with Glasgow Assay Office hallmarks, so it seems reasonable to infer that the identical J trilobe W punch was entered at the Glasgow Assay Office by J Véron Grauer & Co.

By extension, it seems plausible to assume that all the similar “J (symbol) W” punches were also entered at the Glasgow Assay Office by J Véron Grauer & Co. It also seems possible that the mark was intended to be based on the initials J and V, but when the punch cutter was instructed, the letters V and W were mixed up due to different pronunciations of V and W.

The earliest record of a J (symbol) W punch is 7 Apr 1928 at the Dublin Assay Office.

J Véron Grauer & Cie of Geneva were carriers who specialised in transporting products of high value such as watches and jewellery, and also in customs clearance in many countries. They entered these sponsor's marks so that they could act as assay agent for a number of different Swiss watch case manufacturers.

The number or symbol between the letters was used most likely used for administrative purposes, to identify which manufacturer each watch case belonged to. Watch cases were submitted in large batches for hallmarking and could not have labels or any other means of identification attached to them, so the sponsor's mark is the only means of identification. 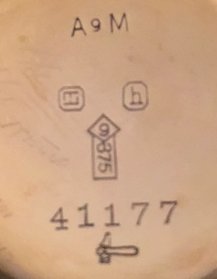 It appears that Véron Grauer were performing the same role as assay agent for Swiss watch case manufacturers as Stockwell & Co. This involved registering punches at British assay offices, supplying these punches to Swiss watch case makers, transporting watch cases to Britain, submitting them for assay and hallmarking and then returning the hallmarked cases to the case maker in Switzerland.

The mark with a star between the A and the M, shown in the second image, is in a case with Glasgow Assay Office import hallmarks which also has the GS sponsor's mark of Stockwell & Company. Véron Grauer was probably also part of the continent wide network of shipping agents including Messageries Nationales Express and the Messageries Anglo-Suisses that Stockwell & Co. also belonged to.

Véron-Grauer also entered a mark AK incuse within an incuse rectangular surround at the Edinburgh Assay Office in 1931.

Véron Grauer & Co still exists as a logistics company in Switzerland, the specialised valuables transport branch of the Deutsche Post DHL group, and traces its history back to 1867.

At one time it was thought that the J (symbol) W punches were entered by James Weir, who did enter some JW sponsor's marks. Philip Priestley records two sponsor's marks that are known to have entered at the Glasgow Assay Office by Weir; J.W. incuse with no surround, which is annotated in the records as “Watch Case Punch”, and J.W in cameo within a heart shaped surround. There are a number of other punches known to have been entered by Weir that Philip did not record because they are not recorded as watch case marks. It seems likely that JW punches without anything between the initials, especially those entered or used before 1928 and those in cameo, were entered by James Weir.