This blog entry is part of my page about British Hallmarks

William Ehrhardt (1831-1897) was born in Germany and served an apprenticeship as a watchmaker there. He came to England in 1851, the year of the Great Exhibition. He worked for a time with Upjohn & Bright watchmakers in London before settling in Birmingham.

In 1856 Ehrhardt set up a company at 30 Paradise Street, Birmingham. It seems his intention was to make watches by machinery. This was before John Wycherley set up his factory in 1866 in Prescot, Lancashire, and before Aaron Dennison formed the Anglo-American Watch Company in 1871 in Birmingham, so Ehrhardt was one of the pioneers of watchmaking by machinery in England.

Ehrhardt was not in England at the time of Ingold's doomed venture in the 1840s, but perhaps he was influenced by the reason for its failure, which was principally due to opposition from established English watchmakers. Ehrhardt chose Birmingham because it was away from the traditional centres of English watch manufacturing where watches were made by hand using craft skills and factory methods would be opposed, as Ingold had been. Ehrhardt wanted machine operators for his factory, not traditional watchmakers.

From 1856 to 1863 Ehrhardt's company operated from addresses in Paradise Street and Augusta Street in Birmingham. In 1864 the factory was moved to Great Hampton Street, and an advert with this address in 1872 says that the company had ... constructed machinery to make his patent keyless movement on the interchangeable system.

William Ehrhardt entered a sponsor's mark at the Birmingham Assay Office on 14 November 1867. This meant that he could send in watch cases to be assayed and hallmarked. It was usual for watch cases to be made by specialist watch case makers, of which there were many in the watchmaking areas of London, Coventry and Liverpool. However, Birmingham did not have such a conglomeration of independent specialists supporting watch movement finishers, which suggests that Ehrhardt's company made watch cases as well as movements, and probably dials and hands as well, so that unlike most English watch manufacturers, all the parts of a watch could be made and finished in the Ehrhardt factory.

In 1873 Ehrhardt was naturalised as a British citizen. In 1874 he built a new factory called “Time Works” in Barr Street to increase production. It is thought that by this time Ehrhardt's company had produced 200,000 watches.

Ehrhardt was granted a patent, No. 6406 dated 1894, for improvements in the hand setting mechanism of keyless watches. The invention was a mechanism that allowed the keyless mechanism to be put into hand set mode by pulling the crown outwards away from the case. This is the way that watches are set today so it seems very familiar, but there were hundreds if not thousands of different mechanisms patented in the nineteenth century to effect this before the sliding pinion design invented by Adrien Philippe in 1845 was eventually adopted pretty well universally. 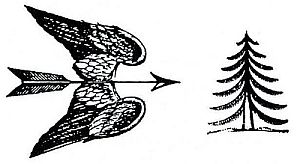 Production peaked around 1900 when 250 persons were employed, including many girls who attended the machines, and 600 to 700 watches were made per week. The lower number of employees but greater number of watches made per week imply that Ehrhardt's sons had increased the productivity of the workforce by increased use of specialised machinery.

From around 1920 the company used the name “British Watch Company Ltd.” on some of its watches, most likely hoping to gain patriotic support in the face of growing imports, a sign of the pressure on the few remaining English watch manufacturers.

The company William Ehrhardt Ltd. was liquidated in 1923, by which date it was one of the very last English watch manufacturers. From 1923 until 1927 the Barr Street address was being used in adverts promoting a new company “G. V. Ehrhardt & Hereward Ltd.” as watch cleaners and repairers, but with no mention of watch manufacture. 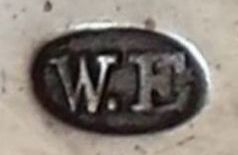 The sponsor's mark “W.E” incuse was entered at the Birmingham Assay Office on 14 November 1867 by William Ehrhardt, and also at the London Assay Office.

After the first incuse punch, further punches with “WE” and “W.E” in cameo within oval and rectangular shields were registered between 1880 and 1914.

The punch mark shown here with “W.E” in cameo within an oval surround was made by one of three punches registered between 1907 and 1914.

The watches manufactured appear to have been initially full plate key wound with going barrels, with anticlockwise winding to simulate the presence of a fusee. Early models had English right angle lever escapements with pointed escape wheel teeth and the frames pinned together, later models had Swiss straight line lever escapements with club tooth escape wheels with the frames screwed together. The patent granted to Ehrhardt in 1894 shows that he was interested in keyless winding by that date, and later production included three quarter plate movements with keyless winding.

In an article in Antiquarian Horology Winter 1996 D. H. Bacon estimated the total output of Ehrhardt watches from the 1874 founding of the Time Works factory as 775,000 watches. This works out very approximately as about fifteen and a half thousand watches a year or 300 a week over 50 years. The rate was lower than this in the beginning and towards the end, and higher in the good years between 1885 and 1910.