This blog entry is part of my page about British Hallmarks

The Anglo-American and English Watch Company

The history of the Anglo-American and English Watch Companies is a story of one factory under two sets of management and two different names.

The Anglo-American Watch Company was one of the first users of mass production machinery in England to manufacture of finished watches in any significant quantity. John Wycherley started earlier but made only unfinished movements, sold as ‘frames’ and rough movements to watch finishers.

Aaron Dennison left the American Watch Company of Waltham in 1861 after a disagreements with Royal E. Robbins. He came to England in late 1863 as an agent selling patented American machinery to the iron trade in Birmingham, England. On a trip to America in 1864 in conjunction with this agency he was approached by A. O. Bigelow to help set up a new watchmaking company in Tremont. Bigelow's idea was to make watch plates and barrels in America by machine, and import the small fine parts, such as the train wheels, balance and escapement from Switzerland, where wages were lower than in America. Bigelow and Dennison founded the Tremont Watch Company in Boston, and Dennison went to Zurich to supervise the ordering and delivery of parts to America.

The strategy was initially successful. In 1866 the company relocated to Melrose, Massachusetts, and was renamed the Melrose Watch Company. At the same time, Bigelow decided to make all the parts of the movements, and to increase production to 100 watches per week. Dennison disagreed with this and left the company. The new strategy was not a success; the Melrose Watch Company ran out of money and failed in 1868. Dennison returned to Boston and tried to form a new company to purchase the machinery and factory but failed. After much searching he found investors in Birmingham, England, who were prepared to put up the capital to buy the Melrose machinery and form a watchmaking company.

The Anglo-American Watch Company was founded in October 1871 at 45 Villa Street, Aston-juxta-Birmingham, which later became known as Hockley, with Dennison as manager, subject to dismissal on three months’ notice and at a salary of £350 per year. 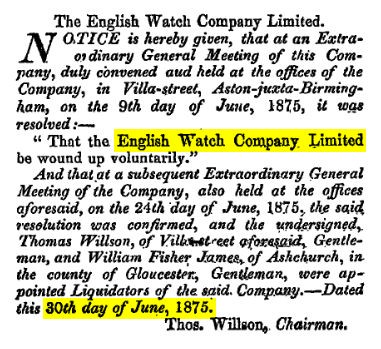 The initial products, uncased movements, were sent to America for sale but there was little demand because of severe economic depression after the financial crisis of 1873 and the market was over supplied. This led to a change in direction towards the British market and the company was renamed the English Watch Company. At some stage this was transformed into a limited company.

Another special resolution was passed on 9 June 1875 which proposed the voluntary winding up and sale of the English Watch Company. The date of 1874 given by Cutmore is wrong and was corrected to 1876 in an article in Antiquarian Horology Winter 1996.

The London Gazette report reproduced here shows that The English Watch Company Limited of Villa Street, Aston-juxta-Birmingham, was wound up voluntarily in June 1875. The initial resolution was made on 9 June. This was confirmed at a second Extraordinary General Meeting on 24 June when Liquidators were appointed.

Bragge must have purchased the company, already named The English Watch Company Limited, from the liquidators. The notice to creditors posted by the liquidators required all claims to be submitted before 1 August 1875. When the assets were sold to Bragge is not recorded but it must have been late in 1875 or early 1876. Bragge entered a sponsor's mark R.B in cameo at the Birmingham Assay Office on 19 January 1876, which he would not have done if he did not already own the company, so he probably bought it in December 1875 or early January 1876. 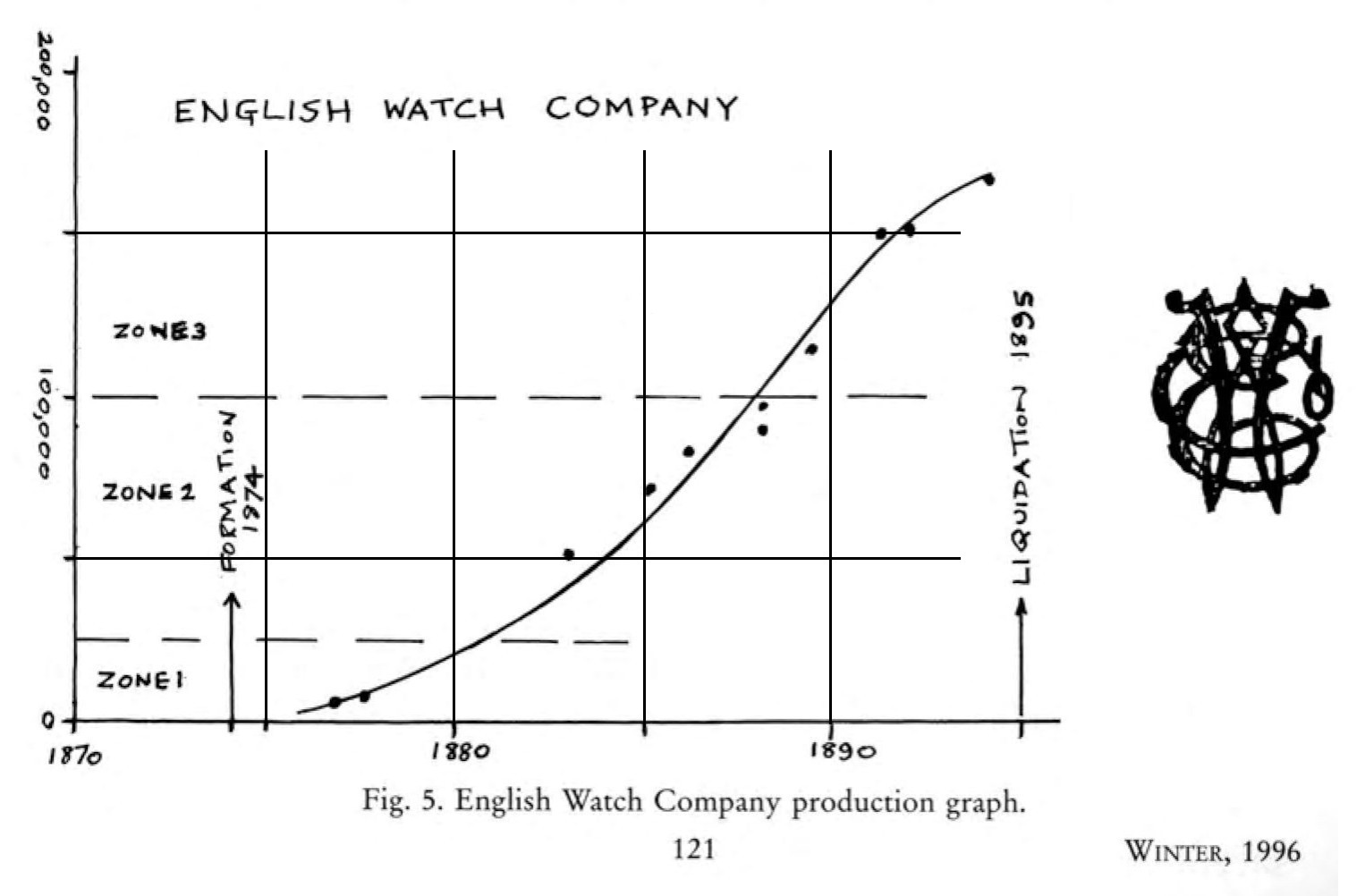 After the takeover by Bragge the English Watch Company continued to use the Melrose machinery for making plates and barrels, but was still dependent on the import of parts from Switzerland. In 1880 it was reported that that 200 men were employed and the machinery was little improved, the escapement and much of the material still came from Switzerland. William Bragge ran the company until about 1883 after which his son Robert took over.

The works at Nos. 41 to 49 Villa Street, Lozells, Birmingham, were reported to have been in active operation under the present management for "about six years", which would imply from late 1875 or early 1876. This ties in with the date of December 1875 to January 1876 for the purchase of the assets of the company by Bragge from the liquidators as discussed above. The works manager was Charles Haseler.

The workshops had been planned for the purpose of watchmaking by steam machinery, the lighting being especially good with windows on both sides of each workshop looking out onto gardens. It was said that in addition to making parts by costly high-class and automatic machinery, "the several parts of the same sizes are interchangeable". Large orders were flowing in from the Indian, Colonial and Home markets with the "revival in trade" after the depression of the 1870s.

The prospectus for the 1882 share sale said that the watches made were exclusively English levers. This indicates a change from the earlier imported Swiss club tooth lever escape wheels to English made pointed tooth lever escape wheels which was noted in the article in Antiquarian Horology. In that article it was assumed that this change might have been a result of the Merchandise Marks Act 1887, but this report shows that it occurred at least five years earlier.

In 1885 at the 4th Annual General Meeting the shareholders were told of the death of the 'founder' William Bragge, an enlargement of the workshop costing £950 and a new and more powerful steam engine by which a 50% increase in production could be obtained.

The chart of English Watch Co. production from Antiquarian Horology Winter 1996 shows movements divided into three broad types or “zones”. Zone 1 are the oldest styles with clockwise winding. Zone 2 have anticlockwise winding with an extra wheel inserted to make the movement wind in the same direction as a fusee movement, although they were actually all going barrel. Zones 1 and 2 have Swiss club tooth escape wheels whereas zone 3 have English pointed tooth escape wheels. According to the prospectus, the changeover to pointed tooth escape wheels should have been earlier than the evidence seems to show.Etymology

The words “Haseler's Patent” on the dial plate or “Patent” on the ratchet wheel click refer to Patent No. 646 granted to Haseler on 16 February 1877 for a recoiling click. In Haseler's design the click has a slot in it which, at the end of winding, allows a small reversal of the barrel to relax the mainspring spring tension slightly. This prevents excessive balance amplitude and obviates the need for stop work on the barrel.

A patent was purchased from Mr Douglas of Stourbridge for his double chronograph and his stock of finished and unfinished movements and materials. The patent was probably No 4,164 of 27 September 1881 which allows the fitting of a centre seconds hand and minute counter to a normal watch, either on the conventional dial at the front or a back dial. The chronograph part was operated by a three-push button. The English Watch Company proposed to produce a combined repeating and chronograph watch known as the 'Chrono-micrometer' and one was exhibited at the 1885 Inventions Exhibition in South Kensington. The watch was a minute repeater with the chronograph showing minutes, seconds and fifths. This was an ambitious project in a different class of watchmaking to those previously made.

In 1886 the company was reported to be very busy and in 1890 Robert Bragge and the company took patent 2,856 for 'Improvements in Chronographic watches'.

The good times didn't last and on 11 February 1895 an Extraordinary General Meeting of the English Watch Company Limited passed a resolution that the company should enter voluntary liquidation. This time it was not resurrected. It is thought that H. Williamson of Coventry bought some of the machinery.