The advertisement for wristwatches by Harrods in an issue of the London magazine “Punch” from June 1917 reproduced here has some interesting features. Note that the prices are given in pounds, shillings and pence, so £3 0 0 means three pounds, zero shillings and zero pence. 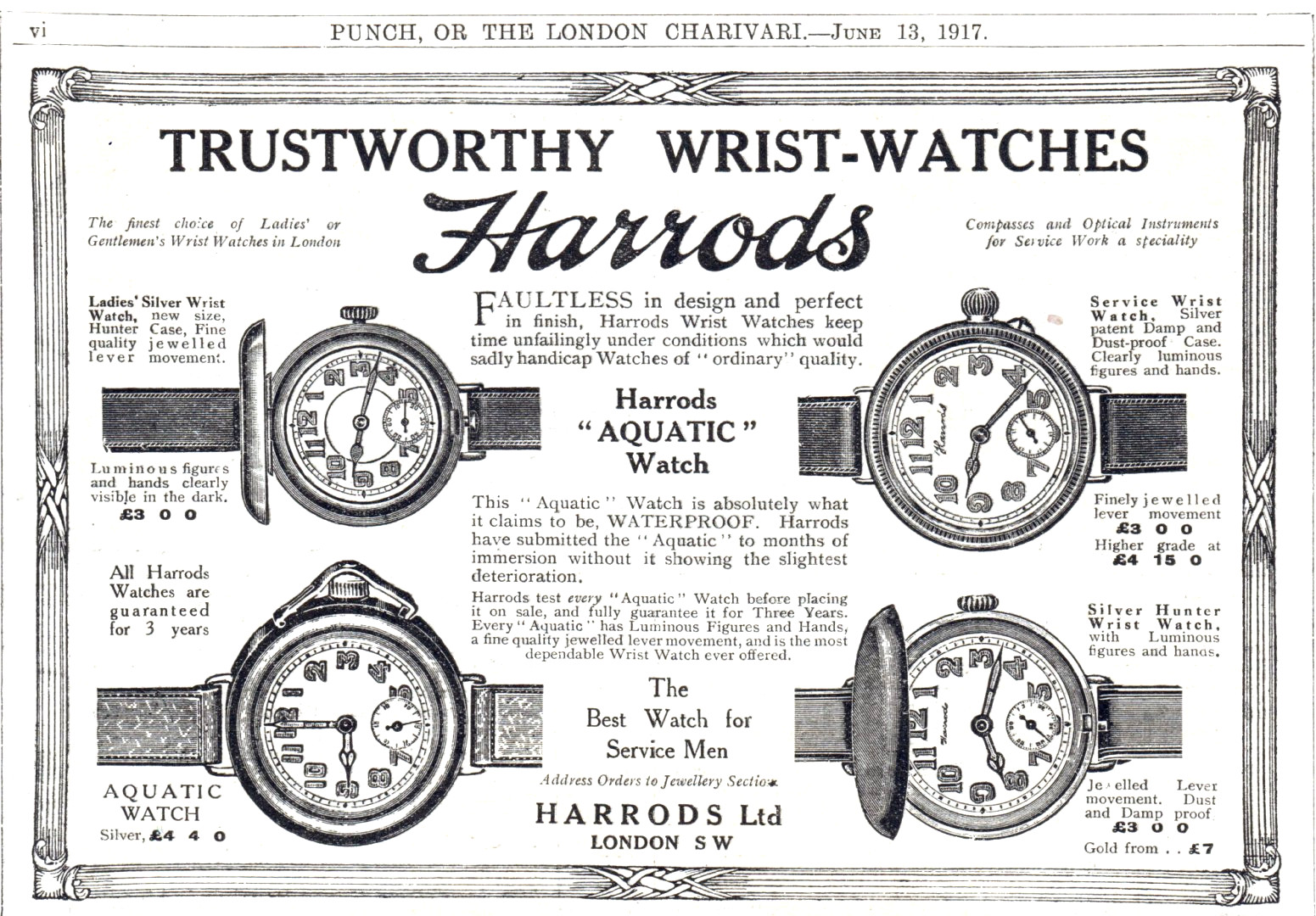 Note that all of the wristwatches in the advert have skeletonised hands and numerals which carry radium luminous paint. This paint is not like modern luminous paints; it doesn't need to be exposed to sunlight but glows strongly all the time. Luminous paint and an unbreakable crystal quickly became the signature features of an officer's wristwatch or trench watch, and featured prominently in adverts during the war. A book published during the war “Knowledge for War: Every Officer's Handbook for the Front” by Captain B. C. Lake included a list of Officer's Kit. The very first item, ahead of otherwise indispensable items such as a revolver and field glasses, is “Luminous wristwatch with unbreakable glass”.

The first watch at the top left is a ladies' wristwatch with hunter lid and luminous numerals and hands. This is clear evidence of women wearing military looking items during times of war, as discussed in the section Ladies' “Trench” Watches?. The case of this watch is about 30mm diameter, excluding the crown, showing that wristwatches of this size and smaller diameters were considered at the time to be ladies' watches.

The watch at bottom left is a Fortis “Aquatic”. The waterproof case of the Aquatic watch was invented in 1915 by two Swiss gentlemen, Paul Ernest Jacot and Auguste Tissot. Swiss and British patents were granted for the invention. The Aquatic watch was assembled by the Fortis Watch company of Grenchen in the canton of Solothurn in Switzerland. The advertisement makes some bold claims about the watch that are worth noting:

This “Aquatic” Watch is absolutely what it claims to be, WATERPROOF. Harrods have submitted the “Aquatic” to months of immersion without it showing the slightest deterioration.

Harrods test every “Aquatic” Watch before placing it on sale, and fully guarantee it for Three Years. Every “Aquatic” has Luminous Figures and Hands, a fine quality jewelled lever movement, and is the most dependable Wrist Watch ever offered.

The term waterproof was used at the time to means the watch would withstand rain, or splashing with water whilst hand washing. The requirements of recreational diving, or even swimming wearing a watch, were not considered until well into the twentieth century. Watches are not called waterproof today, recognising that such an absolute standard cannot be achieved, but are characterised by different degrees of water resistance. Note that the advertisement does not claim that the Aquatic is the first waterproof wristwatch. That is because the Aquatic was preceded in 1915 by the Tavannes “Submarine” wristwatch. Harrods would surely have liked to sell the Submarine wristwatch, but Brook and Son of Edinburgh were the sole agents.

The wristwatch at top right, has a Borgel patent screw case. Invented by François Borgel of Geneva and patented in 1891, the Borgel screw case was very widely used for officer's wristwatches and trench watches during the Great War. The advert does not specifically name Borgel, but the statement that the watch has a patent damp and dust proof case, together with the milled bezel, the onion crown on the end of a significant stem tube projecting from the case, and the pin-set in an olivette next to the crown for hand setting, leave no doubt that it is a Borgel case.

Although it was advertised as being damp and dust proof rather than waterproof, the Borgel screw case was much better sealed than jointed cases. The movements of watches with Borgel cases were very well protected from the adverse conditions in the trenches and often emerge in almost factory fresh condition after over 100 years.

The final watch at bottom right is also advertised as being dust and damp proof. This probably means that it has a screw on case back, rather than a jointed back (joint being the case maker's term for a hinge). Even when a jointed case had a second inner back or cuvette, they are not well sealed against damp and dust. However, this watch has a normal pumpkin crown, the stem entering the case through a simple hole with no sealing, which was an obvious ingress point for dust and damp. The relatively high price of three pounds for this watch was due to the hunter lid. These were intended to protect the glass, but were made superfluous when unbreakable crystals for wristwatches were introduced in Switzerland in March 1915.