The section below is from my page about the Geneva watch case makers Taubert & Fils. 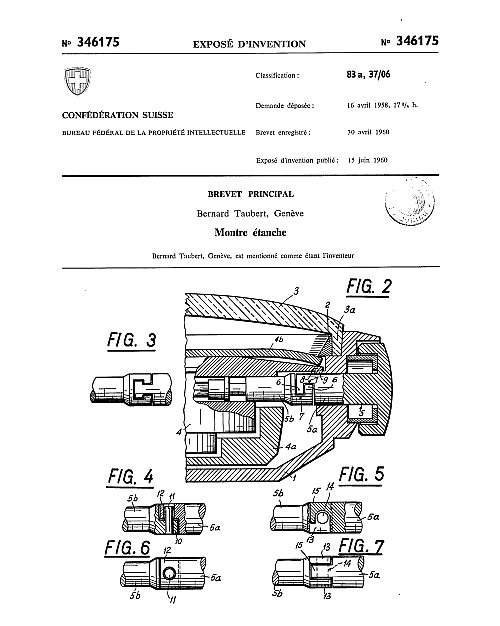 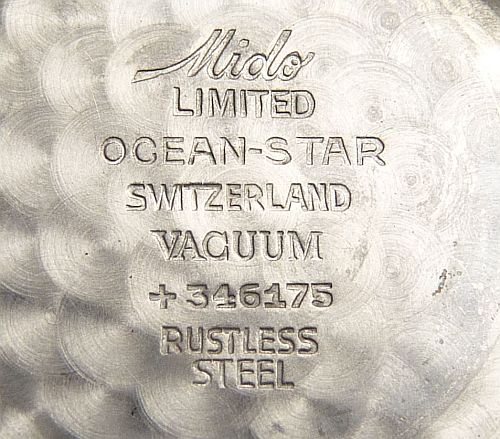 The relationship between the Taubert watch case company and Mido lasted at least into the 1960s. Evidence for this can be seen in a range of waterproof wristwatch cases supplied by Taubert to Mido stamped with the Taubert trademark "Vacuum" and the number "+346175". This number refers to a Swiss patent for a "Montre étanche" (waterproof watch) registered by Bernard Taubert on 16 April 1958 and published on 30 April 1960.

These Taubert "Vacuum" cases were used by Mido in the Ocean Star range of wristwatches, including a dive watch that was stamped on the outside case back with an image of a Scuba diver and the words "Guaranteed 300m / 1000 ft". Not a bad depth for a cork stem seal.

This style of waterproof case, today called "top loader" or "front loading" was very widely used in the 1960s and 1970s. I am not sure whether Mido was the first company to use this design but, given their evident close relationship with the Taubert company, it seems likely that they were.

The picture here is from the case back of one of these Mido Ocean Star watches. The Taubert trademark "Vacuum" is clearly seen above the sign of the Swiss Federal Cross, which in this case indicates a Swiss patent, followed by the patent number like this:

Patent CH 346175 "Montre étanche" (literally a "tight watch" but translated as "waterproof watch") was registered by Bernard Taubert on 16 April 1958 and published on 15 June 1960, as shown in the extract reproduced here.

The salient features of this patent were that the case was made in one piece with no separate back, very much like the original Borgel one-piece screw case. The movement was introduced into the case through the top or front opening, hence the name "top loader" or "front loader" for this case design The movement and dial were then held in the case by the crystal through an intermediate spacer ring.

Borgel's solution was to make a sliding joint between the two parts of the stem, fixing the outer part of the stem to the case with a spring so that it could be withdrawn to remove or insert the movement. However, this required a separate pin set mechanism for hand setting. For the top loader case Bernard Taubert also designed a winding stem that was in two parts, one part fixed in the movement and the outer part removable. To allow stem setting and avoid the need for a pin set mechanism, the joint allowed to two parts of the stem to separate when the movement was removed from the case, but coupled them both axially and rotationally so that the watch could be wound and set by the stem. The design of this joint can be seen in the drawing from the patent where "Fig. 3" shows a cross section of the stem. 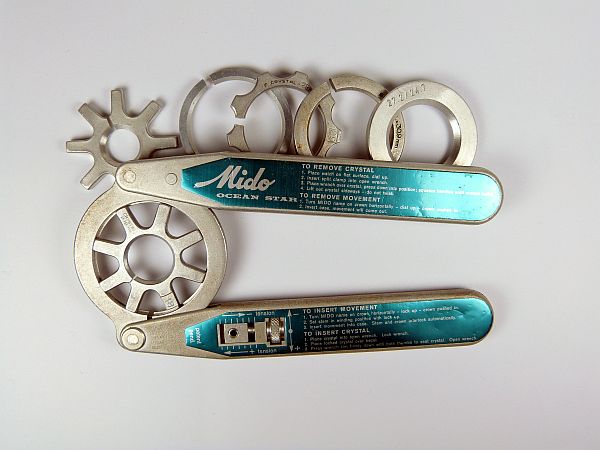 The winding stem was, of course sealed by the tried and trusted Taubert cork seal, which is not mentioned in the patent but can be clearly seen in the accompanying diagram, which Mido called the "Aquadura crown sealing system."

To facilitate removal of the crystal, Bernard designed the special tool shown here. This tool was patented in Switzerland, CH 353693, and also in Great Britain, France, Germany, and the United States. The tool has a number of exchangeable inserts to fit different size crystals, one to fit a small crystal is in place in the picture. It is a very precise and easy to use tool. The instructions printed on the tool make the operation of removing the movement clear. After removing the crystal: 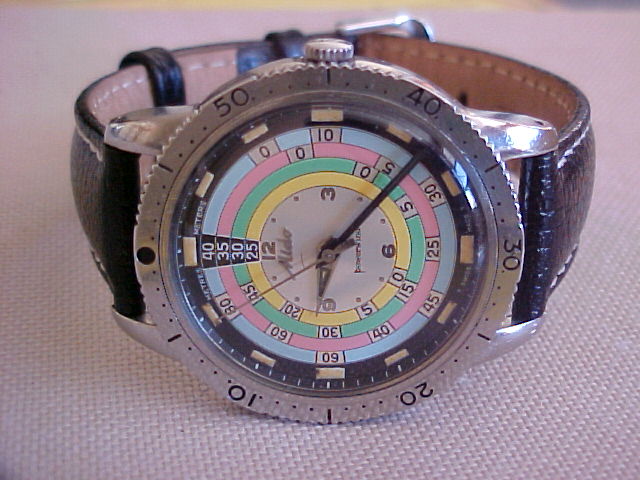 "TO REMOVE MOVEMENT 1. Turn Mido name on crown horizontally – dial up – crown pushed in. 2. Invert case, movement will come out."

This is a slightly fiddly operation and most watch repairers simply pull hard on the crown until the joint snaps apart, and all the movements I have seen in this type of case have the joint shaped to allow this, which is different to how the joints are shown in the patent. It must have been a fairly early modification. I have also seen it suggested that the crystal can be removed from of these watches by pumping air into the case once the stem has been removed, the crystal being literally blown out. Presumably not every watch repairer had access to the correct tool, or even knew of its existence.

These cases were used from 1959 in the Ocean Star range of watches by Mido, including the Mido Ocean Star diver’s watch with its amazing multicolored dial shown here. This watch is stamped on the outside case back with an image of a scuba diver and the words “Guaranteed 300m / 1000 ft,” which seems a pretty amazing depth for the cork stem seal, I wonder if there were ever any claims under the guarantee?.