From 6 March to 28 May 2017 Longines held a competition to find the oldest Longines watch in the United Kingdom. I entered one of my watches, details below. Due to the high quality of applications received, Longines decided to create a book about the competition with details of all the shortlisted watches. This resulted in a delay to the announcement of the winner of the competition, but the wait is soon to be over!

At the end of March 2018 I was notified that my watch had been shortlisted, and that an event will be held on Friday 18 May at the Longines Boutique in central London when the winner will be announced. All the owners of watches on the shortlist are invited to a champagne reception for the announcement, followed by a slap up lunch at a posh Mayfair restaurant. Needless to say, I have got my fingers crossed, but I am not counting my chickens.

I can uncross everything and count my chickens now, my watch won the competition! There were some great entries, but none came even close to my watch in age. (But you might not have heard about the competition and have an earlier Longines in the UK; if you do, please let me know.) When I inquired previously, Longines were unable to tell me exactly when the watch was shipped to Baume in the UK, but due to the competition they had another search in the archives and found the relevant entry; the watch was invoiced to Baume on 11 August 1877.

The image below shows the watch in a display case at the Longines London Boutique on Oxford St in Mayfair, London, on 18 May 2018. It's now safely back in Cheshire with me so unfortunately you won't be able to pop in and see it. The image shows the new hallmarked sterling silver bow, it looks so much better than the brass bow that was fitted when I got the watch. The display label reads:

HISTORY OF THE WATCH

0.925 silver open face pocket watch. It is fitted with a Longines manually wound mechanical movement, calibre 19B. It was invoiced on 11 August 1877 to the company Baume & Co., which was at that time our agent for the UK.

You can read more about the watch further down this page, below the image. 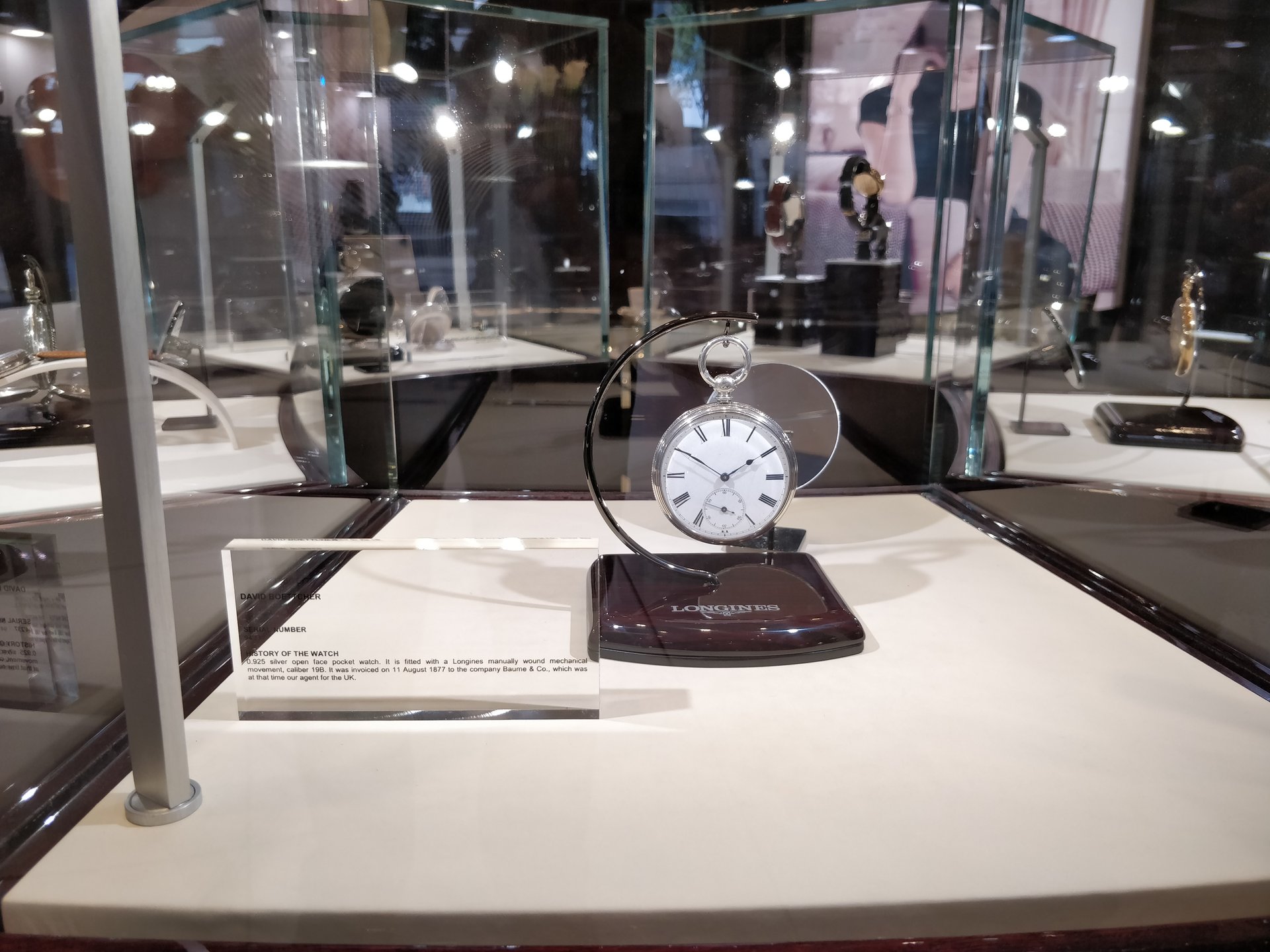 The section below about this watch is from my page about Longines.

In the photographs below the watch has an ugly brass bow, the ring at the top of the pendant where an Albert chain was clipped on for security. The original silver bow was worn through by the clip, the brass ring is a replacement. Many pocket watches of any age have had their bows replaced because of this. I made a new bow in sterling silver, which has been hallmarked with my sponsor's mark and the English lion passant standard mark, just like the original would have been. When I returned to the UK after my unexpectedly long absence due to a medical emergency whilst abroad, my first urgent job was to fit the new bow so that the watch could be couriered to London to be photographed for the book. I didn't have time to take new photographs. I will get the watch back on Friday, with a copy of the book, and I will update this page with some new images and the results of the competition.

The pocket watch shown in the images here is a quite early Longines, made only 10 years or so after the factory was established. The serial number is 94,237 which, according to published tables of Longines serial numbers, would put its date of manufacture at around 1875. But this is not accurate, Longines records show that it was invoiced to Baume & Company in London on 11 August 1877.

This watch won the competition run by Longines in 2017 to find the oldest Longines watch in the UK.

The watch has a key wound and set 15 jewel Longines calibre 19B movement, with right angle lever escapement and club tooth escape wheel. This calibre was first produced by Longines in 1872 as one of three closely related versions of a 19''' movement, referred to as 19B, 19M and 19V. Although Francillon wanted to abandon key winding, problems with stem winding, possibly in producing sufficient quantities of the keyless mechanism components to keep up with production, meant that the 19B and 19M were key wound. The 19V was stem wound.

When I got the watch, the bow (the ring at the top of the pendant) was brass. This was a replacement for the original sterling silver bow that had been worn though by the swivel clip used to attach the owner's Albert chain, which itself was attached to a waistcoat button hole for safety. Many pocket watches of this age with gold or silver cases have had their original bows replaced because of wear from the swivel clip. Quite often a brass bow was fitted because it was cheap, but a gold or sterling silver bow would be preferable and is more original.

How do I know that the original bow was sterling silver? Because the case has London Assay Office hallmarks, and the assay office would not hallmark the case without the bow, and they would not hallmark anything unless all parts were made of the same fineness metal. This includes the inner case back, which is not shown here but is also hallmarked. The bow would have had a “part mark” composed of the sponsor's mark and lion passant. I have made a new bow in sterling silver, which has been hallmarked with my sponsor's mark and the lion passant standard mark, the same as the original would have been.

The inside case back has London Assay Office hallmarks for sterling silver with the date letter "B" for the hallmarking year 1877 to 1878. Hallmark date letters span two calendar years because the punches were changed when new wardens were elected. At the London Assay Office after the restoration this took place on 29 May, the birthday of King Charles II, and also the day that he returned to London in 1660. So this watch was hallmarked at Goldsmiths' Hall in London between 29 May 1877 and 28 May 1878. 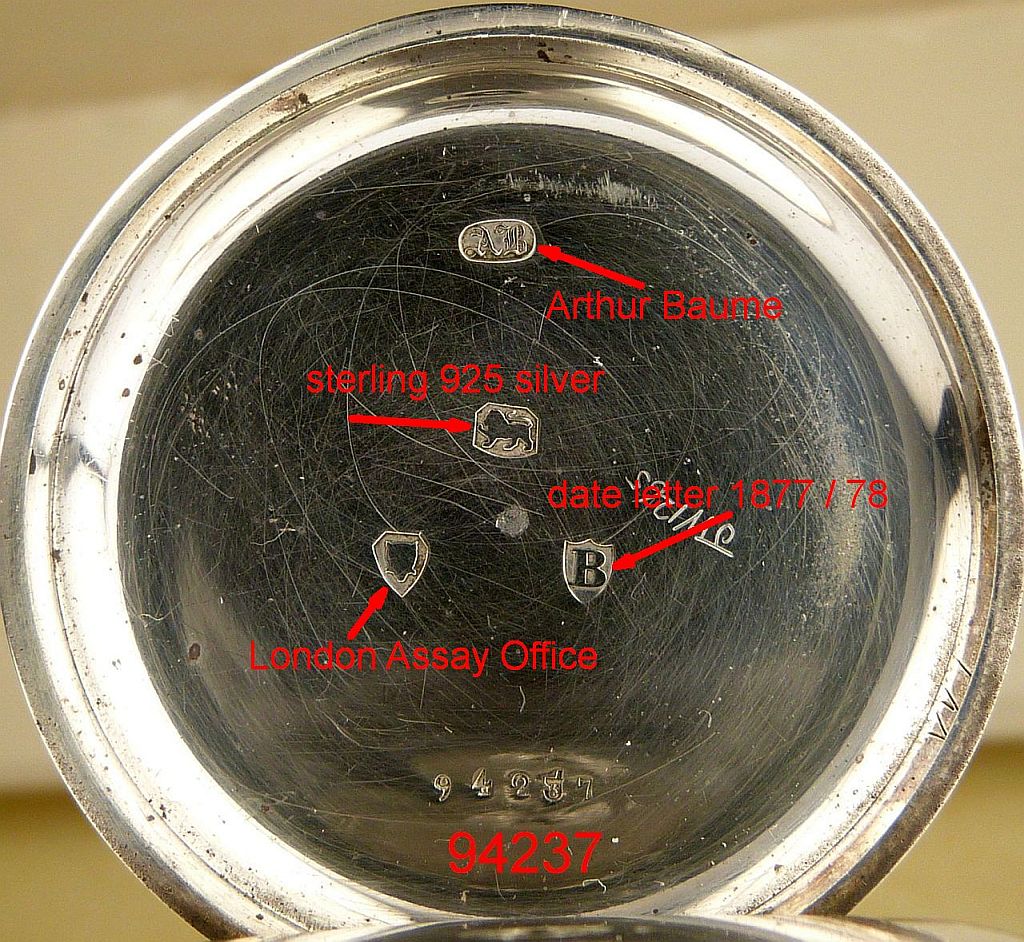 Longines Pocket Watch Inside Case Back: Click to enlarge 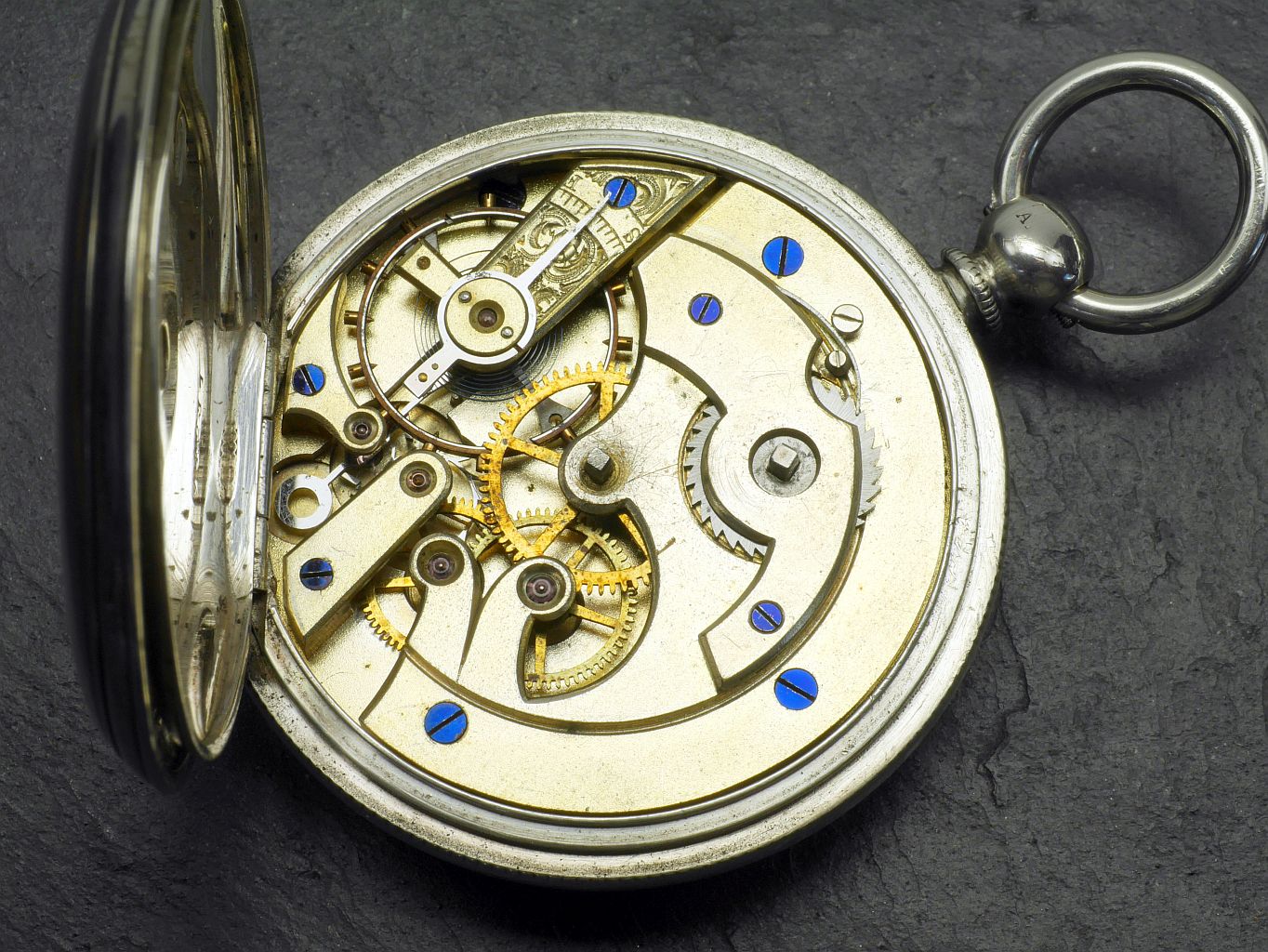 The sponsor's mark AB in curly letters in cameo within an oval surround was entered by Arthur Baume at the London Assay Office on 18 November 1876. The hallmarks show that this Longines watch was imported into Britain within one or two years of Baume first entering his punch mark in 1876, the same year that Baume & Co. became sole agents for Longines in the UK.

In 1876 Célestin Baume became the sole representative of Longines for Great Britain and the whole of the British Empire. Soon after this Célestin was succeeded as head of the company by his nephew Arthur Baume. Longines watches were high quality and it appears that Baume decided that British hallmarks in their cases would be a useful endorsement of this, which is most likely why he registered his details and a punch mark at the London Assay Office in November 1876, shortly after the agency agreement was made with Longines.

The practice of getting Swiss watches cases hallmarked in British assay offices was effectively stopped from 1 January 1888 by the Merchandise Marks Act. During the period from 1874 to 1887 when it did happen, only a minority of imported Swiss watches, of high quality where the extra expense was worthwhile, were hallmarked in this way, so it is quite unusual to find a nineteenth century Swiss watch with British hallmarks. British hallmarking of all imported gold and silver watch cases became compulsory from 1 June 1907. See Foreign Watches with British Hallmarks for more details about this.