Fortis was founded in 1912 by Walter Vogt in Grenchen, Switzerland. Grenchen is in the predominantly German speaking part of Switzerland, the French name for the city is Granges. Grenchen is well known for its watch industry. Vogt was joined by a partner and for a short time the company traded as Vogt & Rüfli. In May 1914 the name of the company was changed to "Vogt & Cie, Fortis Watch Co, fabrication d'horlogerie Granges."

An interesting early waterproof wristwatch is the Fortis Aquatic shown in the picture here. I haven't got round to cleaning this watch and took a quick photograph for this article because the dial retains a lot of radioactive radium paint and I don't want to disturb things until I am ready to do a full clean and restoration on the watch.

The waterproof case of the Aquatic watch was invented in 1915 by two Swiss gentlemen, Paul Ernest Jacot and Auguste Tissot. Swiss and British patents were granted for the invention. The Aquatic watch was assembled by the Fortis Watch company of Grenchen in the canton of Solothurn in Switzerland. The watch was sold with no name on the dial and simply Aquatic stamped inside the case back, and also with Rolex and Zenith brand names. 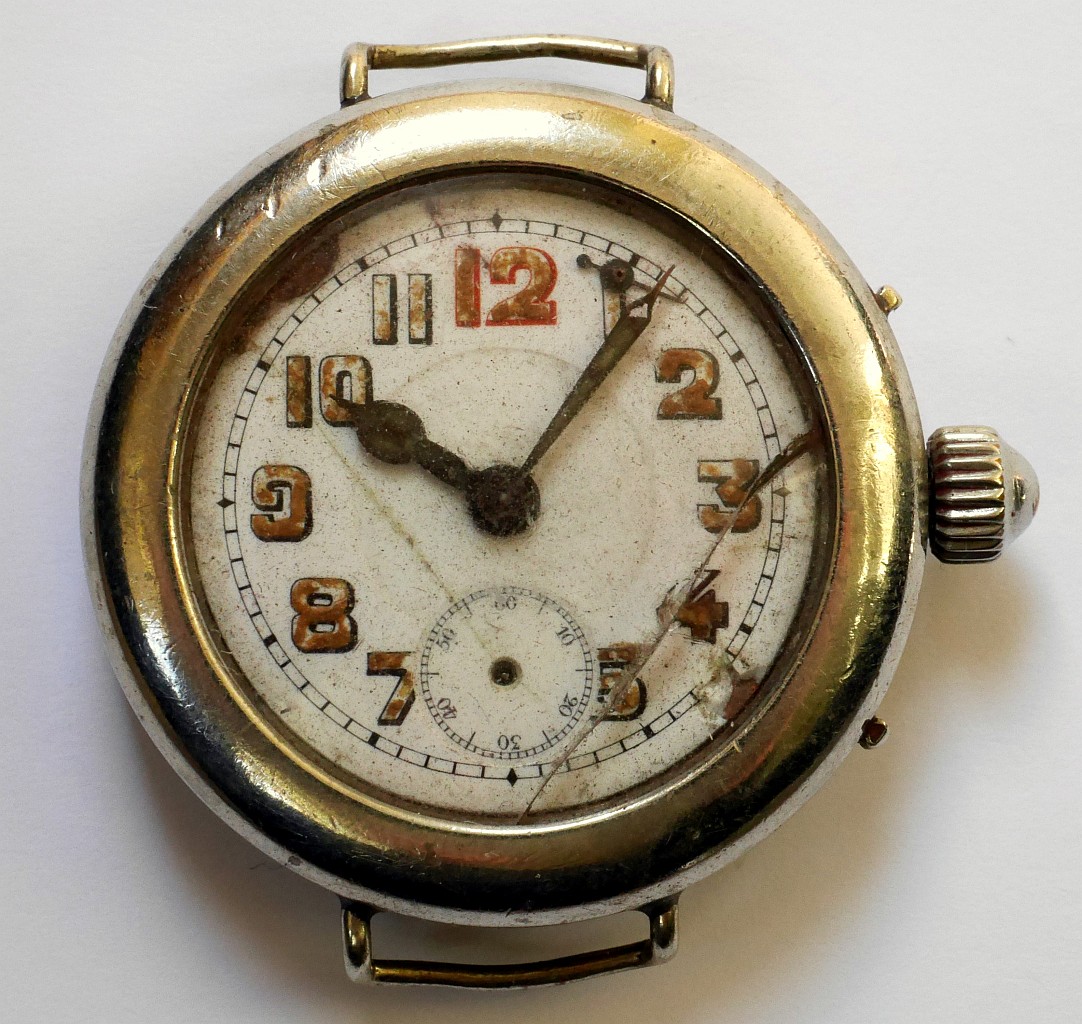 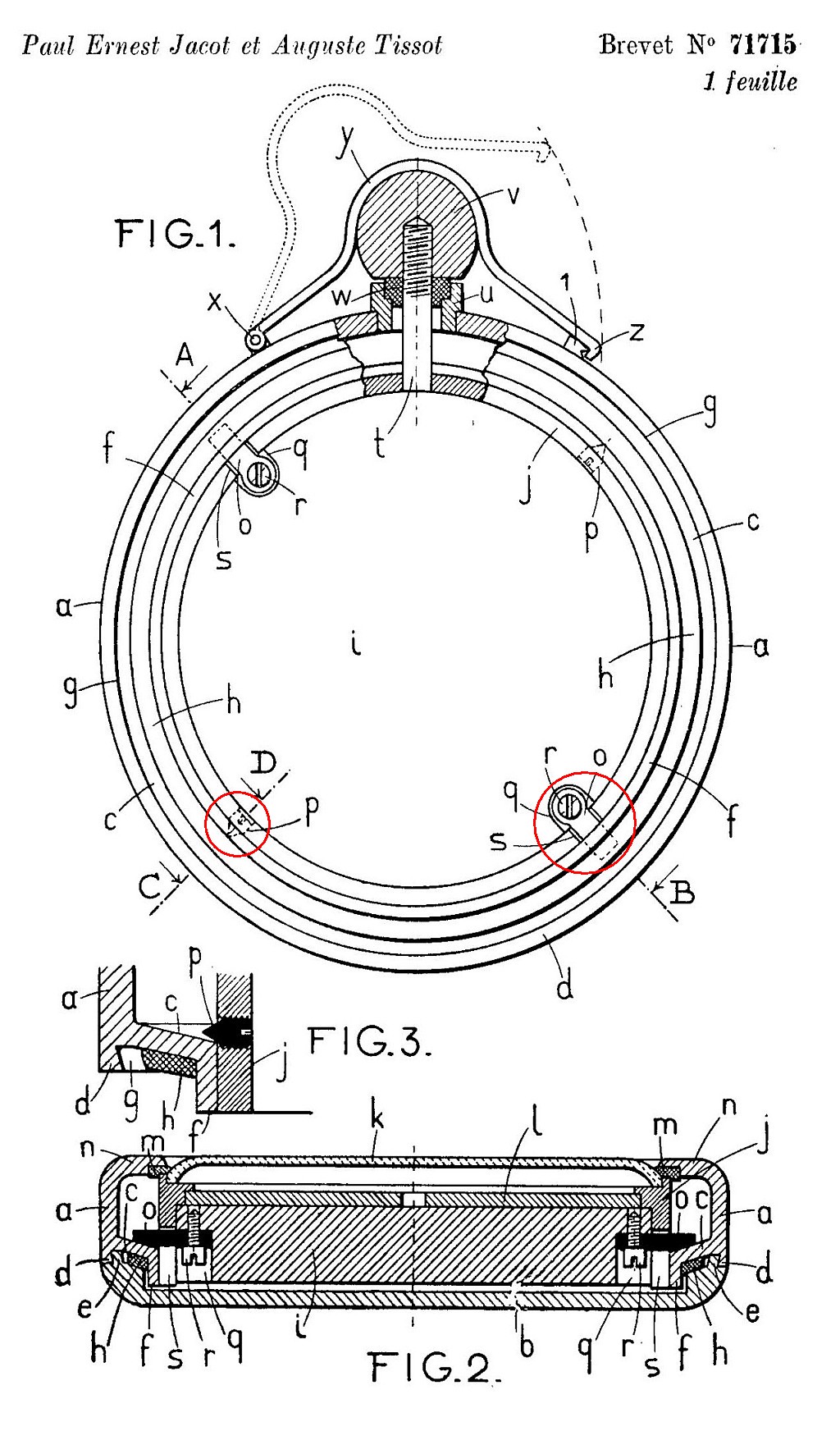 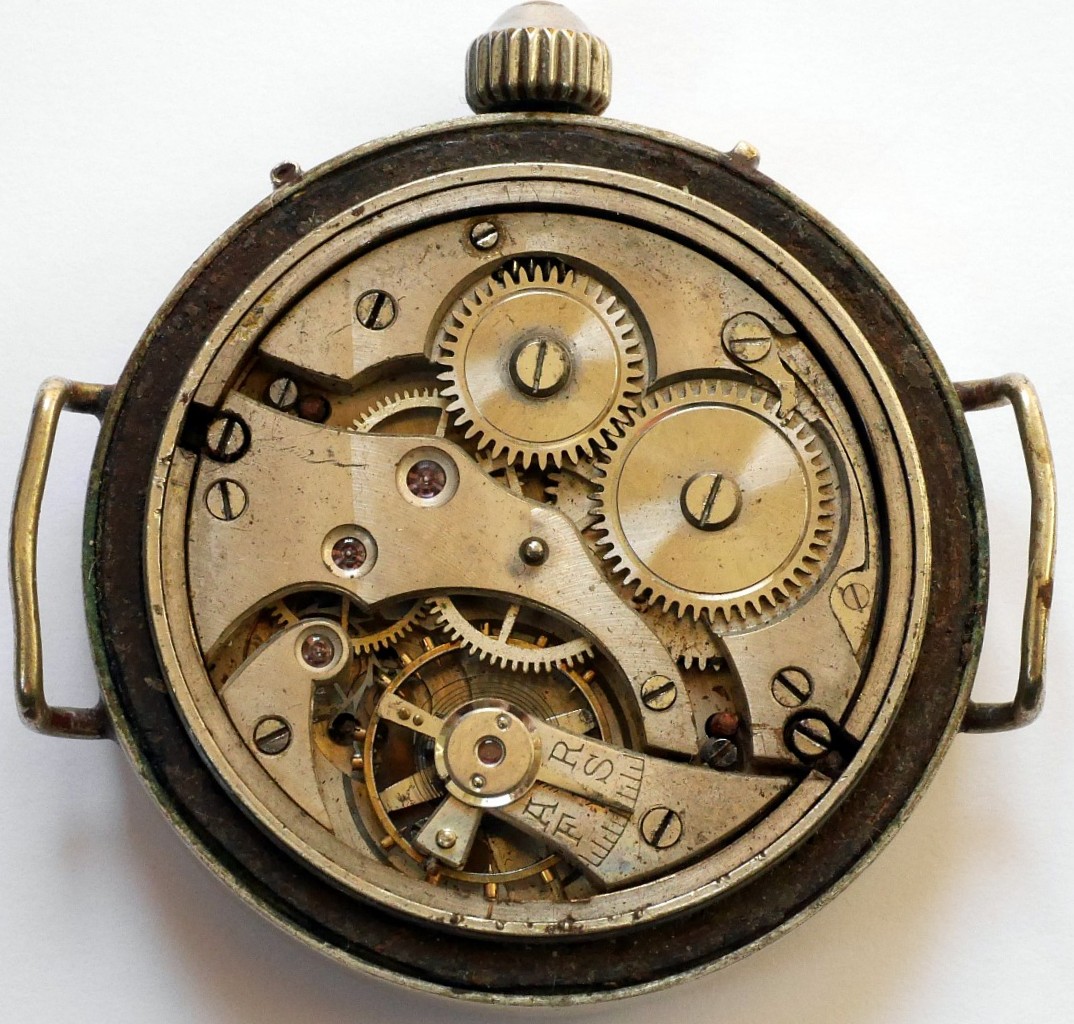 The design of the Aquatic watch was the subject of Swiss patent CH 71715. The inventors Paul Ernest Jacot and Auguste Tissot applied for a patent on the design on 27 August 1915 and the patent was granted and published on 1 February 1916. The title of the patent was "Montre avec emboîtage hermétique du mouvement", i.e. a watch with a hermetic case for the movement. The same two gentlemen, describing themselves as manufacturers of La Chaux-de-Fonds, Switzerland, applied for a British patent for the same design, which was granted as British patent 101,345 on 28 August 1917, one year to the day after the application was made. This delay was of little consequence because in both cases the priority date, the date from which the invention was protected by the patent, was 27 August 1915.

It appears that Jacot and Tissot must have licensed the patent to the Swiss watchmaker Fortis, because all of the watches with this case design carry the name "Aquatic", a name that had been registered by Fortis so that no one else could use it.

The Aquatic case in detail

The figure reproduced from the patent shows cross sections through the case. The principal waterproof features are that the case has a screw back, no front bezel, and gasket seals for the glass and for the winding stem where it enters the case.

The glass is held in place by a ring labelled j in the figures from the patent. Fig.3 shows how a screw p with a conical end is screwed through this ring and the cone bears against an internal step in the case. When the screw is tightened its conical end bearing on the step forces the ring upwards, pressing the glass against a gasket labelled "m", sealing the glass against the case. I have put a red ring around one of the p screws in Fig. 1.

The movement is held in place by the two screws labelled "r" in the figure operating on the two bars labelled "o". I have put a red ring around one of these pairs of screws and bars in Fig. 1. The bars bear against the internal step in the case and, when the screws are tightened, act as levers holding the movement into the case. The screws r are easily visible in the photograph below of the movement together with the slots in the ring j that the bars pass through. 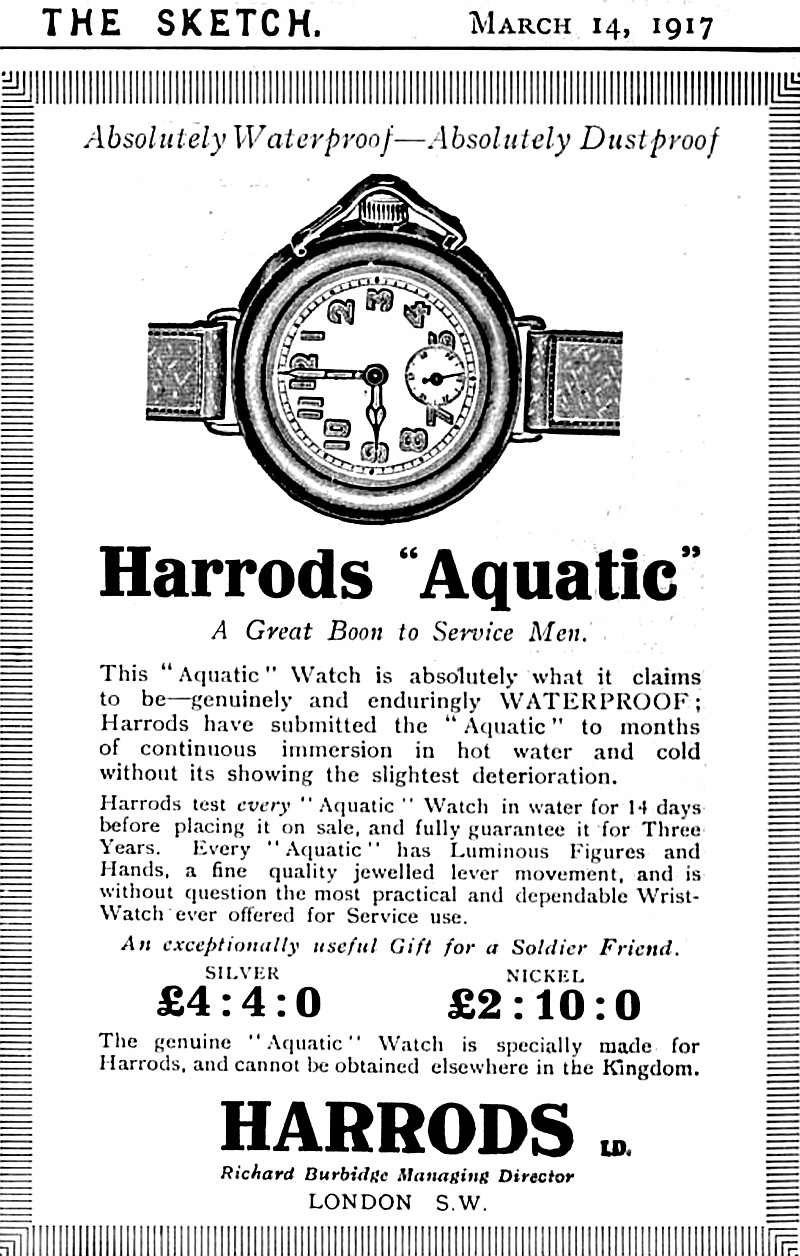 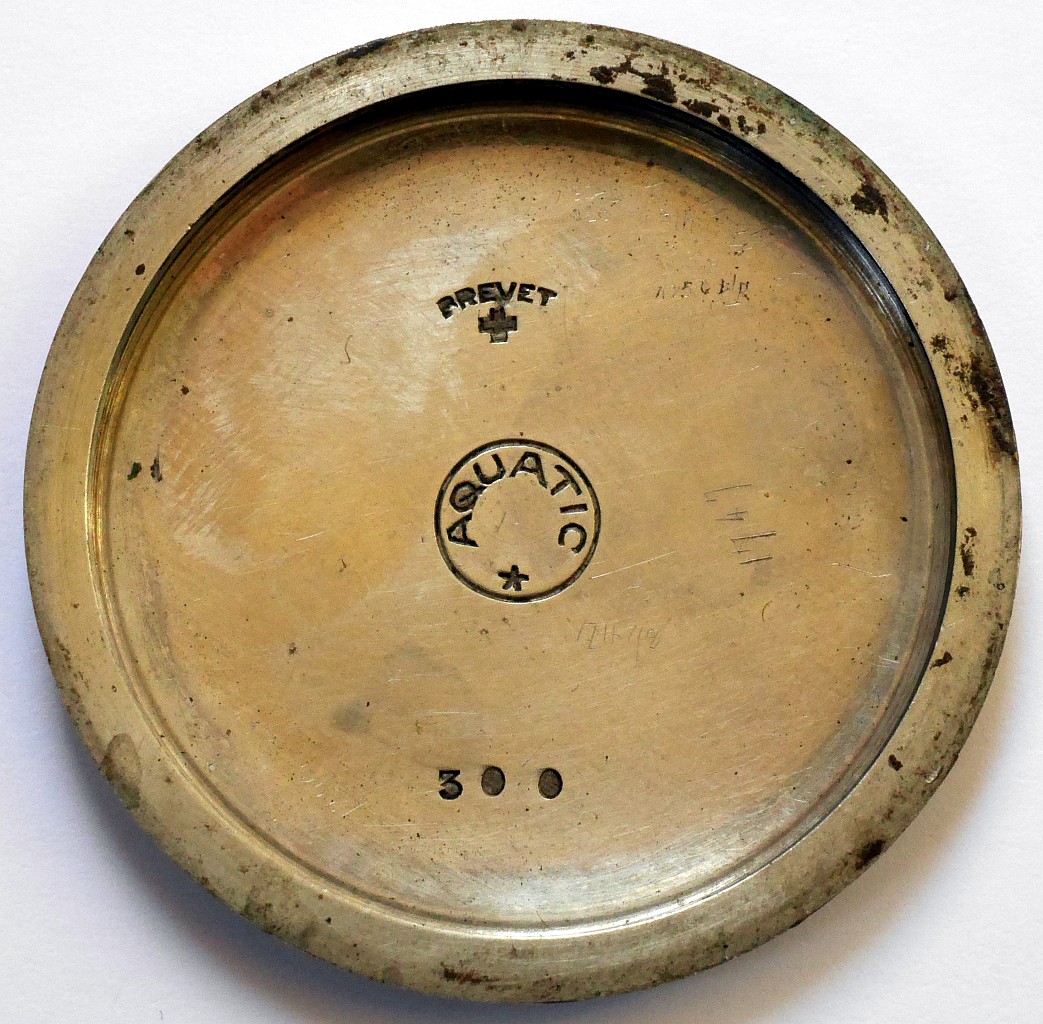 The use of the separate j ring to hold the glass in place seems at first glance an unnecessary complication, but it has the benefit that the movement can be removed by undoing the two screws r, when it drops out from the back of the case without disturbing the glass and its gasket seal.

The opening in the side of the case where the stem enters is sealed by a gasket "w" in a cup shaped feature "u". To achieve a seal the crown is clamped down onto the gasket by the spring strip "y". This is missing from my watch, but you can see the two attachment points on the side of the case, one the tube "x" where the root of the strip was attached to the case, the other a snapping piece "1" where the end of the strip "z" snaps into place.

The stem sealing gasket was the Achilles heel of this design. It is missing on my watch and James Dowling told that Zenith & Rolex also used this case design, but there does seem to be an inherent weakness in the stem/crown design as both the Rolex pieces I have in my collection are missing both these rather essential components. The Rolex branded watches that I have seen with this case have the same movement as mine and it seems that both Rolex and Zenith purchased complete watches from Fortis.

The advert by Harrods reproduced here from The Sketch of March 1917 is interesting, it says that Harrods test each watch in water for 14 days before putting it on sale, and that they guarantee it for three years.

The watch was available with a nickel case at two pounds and ten shillings, or a silver case at four pounds and four shillings. The price difference is quite significant, the silver case nearly doubles the price! My watch has a nickel case so it is not hallmarked and cannot be dated from the hallmark date letter.

The Harrods advert says that the Aquatic watch was specially made for Harrods and could be be obtained anywhere else in the Kingdom. This situation didn't last, in 1917 the company of Lawrence & Laurence Ltd., Watchmakers to the Admiralty, were advertising the Aquatic watch. The price was higher than Harrods at three pounds for a nickel case and five pounds for a silver case. This was an expensive wristwatch at the time.

In the 1920s John Harwood, a watchmaker originally from the Isle of Man, designed a watch that was self winding and bezel set so that it needed no stem, and hence no hole in the case through which dirt and moisture could penetrate. Although automatic watches with oscillating masses were known from the eighteenth century, they had previously all been larger pocket watch size to accommodate the necessary mechanism. Harwood was the first to successfully to apply an oscillating mass automatic winding system to a wristwatch.

In 1922 John Harwood, a British watchmaker and inventor, was in Switzerland searching for a watchmaking company to produce his invention of a self winding wristwatch. Harwood's first patent on his invention was taken out in Britain, he was granted a Swiss patent for it in 1924.

While he was in Switzerland trying to drum up support for his idea Harwood stayed with for some time with Victor Gisiger, who made contact with César Schild for him. As result, the first ébauches of automatic wristwatches were produced by A. Schild S.A. at Grenchen in late 1926. Schild was a shareholder in Fortis and put Harwood in touch with them with a view to having them assemble the watches, and Walter Vogt was enthusiastic about the idea.

The Harwood automatic watch was launched at the Basle fair in 1926 and Fortis became the world's first serial manufacturer of automatic wristwatches. The movement was based on an ébauche manufactured by A. Schild with added automatic winding gear. In 1928 the Harwood Self-Winding Watch Co. was founded to finance advertising, promotion and sales support for the watches, and to hold Harwood's patents. This company collapsed as a result of the global economic crisis triggered by the Wall Street crash in October 1929, leaving the field open for others to create self winding watches.

Another Harwood invention manufactured by Fortis was the “Autorist”, a wristwatch that was wound by a mechanism actuated by small levers between the case and wrist strap.

The automatic winding was not very effective, it required the wrist strap to be precisely the correct length in order to cause the levers to move. The watch was not a commercial success which today makes examples of these watches rare, but they are more of a curiosity than a practical wristwatch.