This section is from my page about Hans Wilsdorf and Rolex. 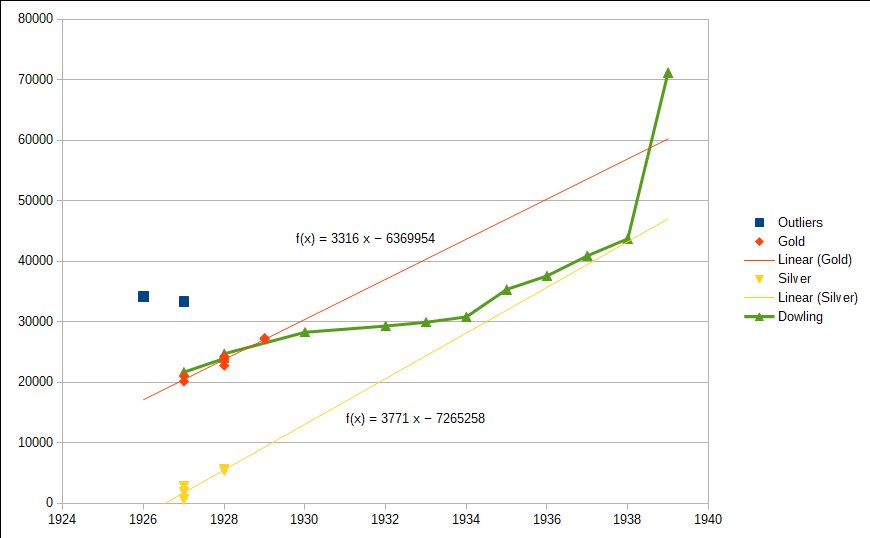 When I started to examine early Oyster cases in detail, the serial numbers seemed to follow no pattern at all and appeared to be completely random, which I mentioned on this page. James Dowling recently remarked to me “I disagree with you about the Oyster case numbers, I very firmly believe that they are sequential.” So I went back to the data and had another look, and an interesting pattern appeared.

I plotted the data from a number of cases to produce the chart shown here. The dates of the cases are taken from their British hallmarks, and it must be remembered that hallmark date letters span two calendar years. For the Glasgow Assay Office, where most of the cases were hallmarked, this was from 1 July to 30 June. The dates I used for this chart are the first year in which the case could have been hallmarked. Also, a hallmark date letter shows only when the case was hallmarked, not when the case was finished after it had been hallmarked and fitted with a movement to make it into a watch.

The silver cases, plotted in yellow, have lower serial numbers than the gold cases, plotted in red. It appears that the silver case serial numbers might have started at zero and the gold cases at 20,000. There are linear regressions lines plotted for the gold and silver case data. Their associated equations have slopes of 3316 for gold cases and 3771 for silver, which suggest approximate annual production rates. Because so few watches with gold cases of any make survive from this period in comparison to those with silver cases, it is natural to assume that watches with silver cases were made in larger numbers, but in fact production data from Swiss case makers shows that gold and silver cases were made in similar numbers. It is the intrinsic value of gold that has led to the loss of many gold cases to the bullion refiner's melting pot over the years.

There is a table of Oyster case serial numbers in the back of the Dowling and Hess Rolex book, also based on hallmark dates but whether the cases were gold or silver is not recorded. I plotted on the chart the data from the book up to 1939, which appears in green. The resulting plot is quite interesting - certainly the general trends are in the same direction. The green line is not a regression line, it simply joins the dots. It shows a notable flattening between 1930 and 1934, reflecting slow sales of expensive watches due to the economic recession that followed the Wall Street crash of 1929.