This section is from my page about Swiss hallmarking that can be found at Swiss Hallmarks.

I have long wondered why in December 1887 the Swiss adopted a standard of 0·935 for sterling silver watch cases. I theorised that this might have been because the British standard mark of sterling silver, the lion passant, didn't reveal the percentage of fine silver; there was no British “0·925” mark at the time. A Swiss clerk tasked with the job of writing the new law might have been unsure of the fineness of sterling and therefore had a piece of British hallmarked sterling silver analysed. British silversmiths used silver of fineness above the sterling standard in order to make certain that the work will pass assay even if the assay is not perfectly accurate. Because of this, when tested in Switzerland a sterling silver item marked with the lion passant could well have assayed at 0·935.

However, I discovered that the true explanation is that the Swiss hallmarking law of 1880 allowed certain tolerances on the assay results. An error limit on the Swiss assay of 5 thousand parts or 0·5% for silver was permitted, which meant that a watch case that assayed at 0·005 below standard could legally be hallmarked in Switzerland. The Swiss higher standard at the time was 0·875, so a watch case that assayed at 0·870 could legally be hallmarked with a bear as if it were actually 0·875. British law did not allow any tolerance, so a case that assayed under standard in this way would not be legal in Britain.

To assay an item, small amounts of material are scraped from it in a process called “drawing”. These drawings are very small in order not to damage the item excessively. The drawings are weighed and the alloying elements removed, traditionally by cuppelation, leaving only the pure gold or silver behind, which is weighed. The difference in the two weights gives the fineness; e.g. a sample of silver that weighed 1 unit before and 0·925 units afterwards was 92.5% pure silver, sterling fineness. To achieve an accuracy better than 5% in an industrial measurement is difficult and although very skilled assayers could achieve better than this, perfect accuracy is impossible.

At one time a tolerance, sometimes called “remedy”, was allowed on some English coins to allow for inaccuracies in the assay process, but this was phased out in later legislation. However, sterling silver always had to be at least 11oz 2dwt fine (at least 0·925 or 92.5% fine silver). Consequently, in Britain silversmiths used silver sufficiently above standard to make sure it would pass assay. In some other countries a tolerance was allowed. A tolerance of 0·005 requires an accuracy of 0·5% on the assay measurement, which is still very difficult to achieve in practice.

The Swiss standard of 0·935 was set to be sure that silver which was hallmarked as such in Switzerland, which might have actually assayed as 0·930, would also pass assay in Britain as sterling, allowing for any slight inaccuracy in the assay there too. That is, if the Swiss assay was completely accurate and a watch case was really 0·930, but the British assay result was under the true value by -0·005, the resulting measured fineness of 0·925 would still be legal as sterling fineness silver.

A fineness mark of 0.935 accompanied by a Swiss hallmark comprising three bears, one small bear above two large bears, shows that the case was hallmarked in Switzerland between 1888 and 1914.

In 1887 the British Merchandise Marks Act introduced new requirements for imported gold and silver watch cases. From 1 January 1888 they all had to be carry no marks at all, or be hallmarked either in a British assay office or in their country of origin. The Act also defined new, and quite objectionable, foreign hallmarks to be struck by British assay offices on imported gold and silver watches, which Swiss manufacturers, quite understandably didn't want. As a result of this Act, from 1 January 1888 the British customs would not allow the import of watches with silver cases marked with either of the legal Swiss standards of silver, 0·800 or 0·875, because these were below the British legal standard of sterling.

This situation was discussed at a Swiss Federal Council meeting on 24 December 1887. It was decreed that a standard for silver of “0·935 Sterling” be allowed to comply with the British law. Watch cases are seen marked 935 Sterling as shown here. The reason for the adoption of the 0·935 standard of fineness rather than the British definition of sterling silver, which is 0·925, is not explained in the minutes.

The reason for adopting a fineness of 0·935 for Swiss sterling silver is that the Swiss hallmarking law of 1880 allowed certain tolerances, sometimes called “remedy“, on the assay results. An error limit of 5 thousand parts for silver was permitted, which meant that silver that assayed at 870 parts could be stamped with a bear and 875. However, in Britain no tolerance was allowed; the minimum fineness allowed was 11 ounces and two pennyweights of fine silver in a troy pound, which equates to 0·925.

The Swiss tolerance effectively recognises a limit on the accuracy of an assay of +/-5‰ and allowed a silver item that assayed at 0·920 to be stamped 0·925, which would not be legal in Britain. Why did the Swiss authorities then settle on 0·935 as their standard for sterling silver? Since the assay process cannot be absolutely accurate the results of an assay in Britain might be slightly different from one performed in Switzerland and therefore a margin for error was allowed. 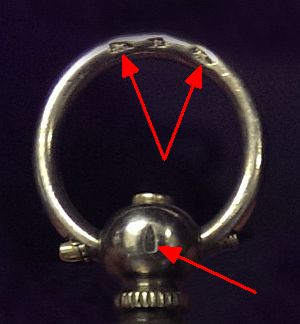 Bow with Two Bears, and Pendant with One Bear

At the Federal Council meeting it was decreed that silver watch cases destined for Britain made of 0·935 silver could be assayed and counterstamped by Swiss Bureaux de Contrôle (assay offices). To confirm that a watch case had assayed at 0·935 a distinguishing hallmark was needed. It was decreed that this should be the set of marks shown here; the standard mark of the number 0·935 in a rectangular shield indicating the fineness and three bears, one small bear above two large bears.

The minutes of the meeting of the Federal Council are beautifully handwritten in German “Sütterlin” script and state für den Feingehalt Silber 0,935 durch zwei Abdrücke des Stempels „großer Bär“ und einen Abdruck des Stempels „kleiner Bär“ (for the fineness of silver 0·935 by two impressions of the stamp “big bear” and one of “little bear”).

The bows of pocket watches were to be stamped with two bears, as shown by the red arrows in the second picture. Another bear was stamped on the head of the pendant as shown by the single third arrow. Because of the way the rampant bears are struck almost horizontally on the bow, and the small size of the marks, people sometimes mistake theses marks for lions passant.

The British customs authorities were not bothered about the number of bears; so long as silver watch cases had some official looking Swiss hallmarks, whether one bear or three, they were happy to let the goods pass – after import duty had been paid of course. 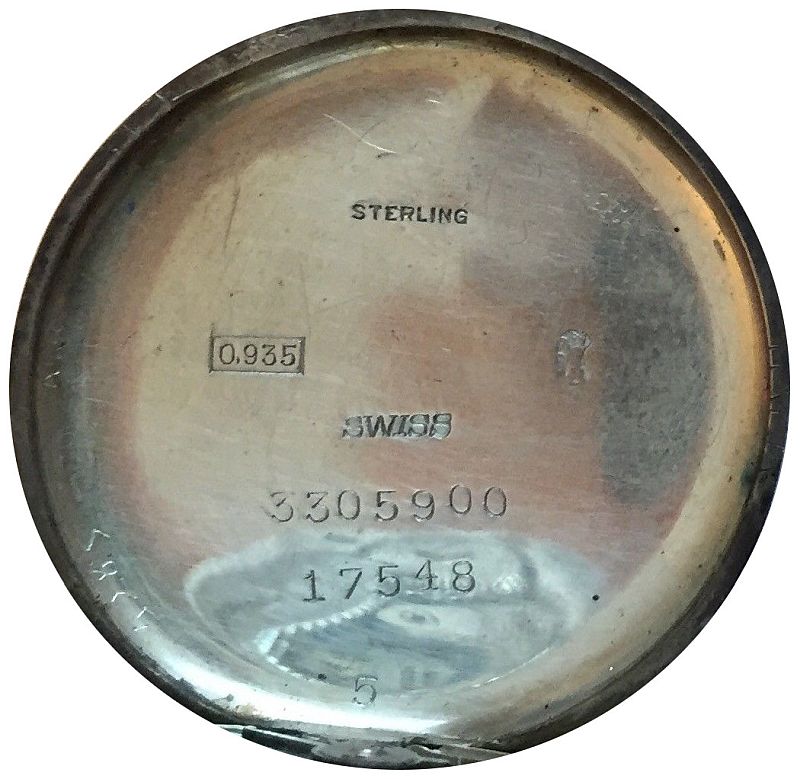 The use of 0·935 silver and the three bears marks was discussed in La Fédération Horlogère Suisse in October 1890, after a suggestion by the authorities that the practice should be discontinued and that watch cases could be marked with 0·935 and a single bear. The watch manufacturers were strongly of the view that it was necessary to continue with it for watches that were to be exported to England, because English customers had come to recognise and appreciate the mark of the three bears. The mark of the three bears therefore continued to be an available option as before.

The mark of the three bears was not universally appreciated. It was said that customers in the United States preferred to see a single bear. Because of this, watch cases of 0·935 silver that were submitted to the Bureaux de Contrôle (assay offices) in packets marked “Destinée à l'Angleterre” (destined for England) were stamped with three bears; without this identification they were stamped with a single bear.

Manufacturers could therefore choose whether to have three bears or just one bear stamped on 0·935 silver watch cases by marking the packets “Destinée à l'Angleterre” if they wanted three bears, or omitting this if they wanted just a single bear. The image here of the case back of a Tavannes watch shows just such a mark, 0·935 and a single bear. The mark “Sterling” suggests that this watch was destined for the USA since the British 1887 Merchandise Marks Act discouraged the use of English words on imported foreign products. 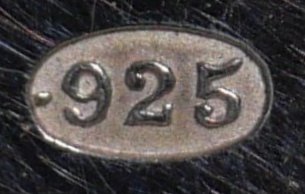 From 1 June 1907 all imported Swiss watches had to be assayed and hallmarked in a British assay office and marked with the new import hallmarks. The hallmarks were made different from the usual British hallmarks; for example, the lion passant was not used on imported sterling silver, which received the

After this date imported Swiss watches rarely also have Swiss hallmarks; there was little point in getting them assayed and hallmarked twice, although there was not a sharp cut off and watches are sometimes seen with both Swiss hallmarks and British import hallmarks. There was no legal reason why a watch could not be hallmarked in both Switzerland and Britain, and no doubt sometimes this was expedient, say if a watch originally intended for another market had already been hallmarked in Switzerland and then an urgent order caused it to be sent to Britain.

In December 1914 a Swiss Federal Decree, discussed in more detail at 1914 Decree, brought several aspects of Swiss hallmarking into line with British practice, including the removal of the “tolerance” on Swiss assay which allowed items of up to 5 parts per thousand below legal fineness to be hallmarked. As a consequence it was recommended that Swiss watch case manufacturers use the mark “0,925” rather than 0,935, the former corresponding to the English fineness of Sterling 0·925, and that a single punch of the bear hallmark be used instead of the three bears hallmark.

In 1933 a silver standard of 0·925, the same as British sterling, was introduced in Switzerland, identified by a symbol of a duck. However, since items imported into Britain had to be assayed and hallmarked in a British assay office, imported watches with British hallmarks and the Swiss duck hallmark are rare or non-existent.

The Swiss 0·875 standard with the rampant bear hallmark was discontinued in 1933. The Swiss capercaillie continued as before to signify for silver of 0·800, which could not be imported into the UK until this lower standard was made legal from 1 January 1975 by the 1973 hallmarking Act. The traditional standard mark of the lion passant continued to be used on items manufactured in Britain; it is still used today although no longer a legal requirement.