I make additions and corrections to this web site frequently, but because they are buried somewhere on one of the pages the changes are not very noticeable, so I decided to create this blog section to highlight new material. Here below you will find part of one of the pages that I have either recently changed or added to significantly.

The section reproduced here is from my page about Birch & Gaydon. 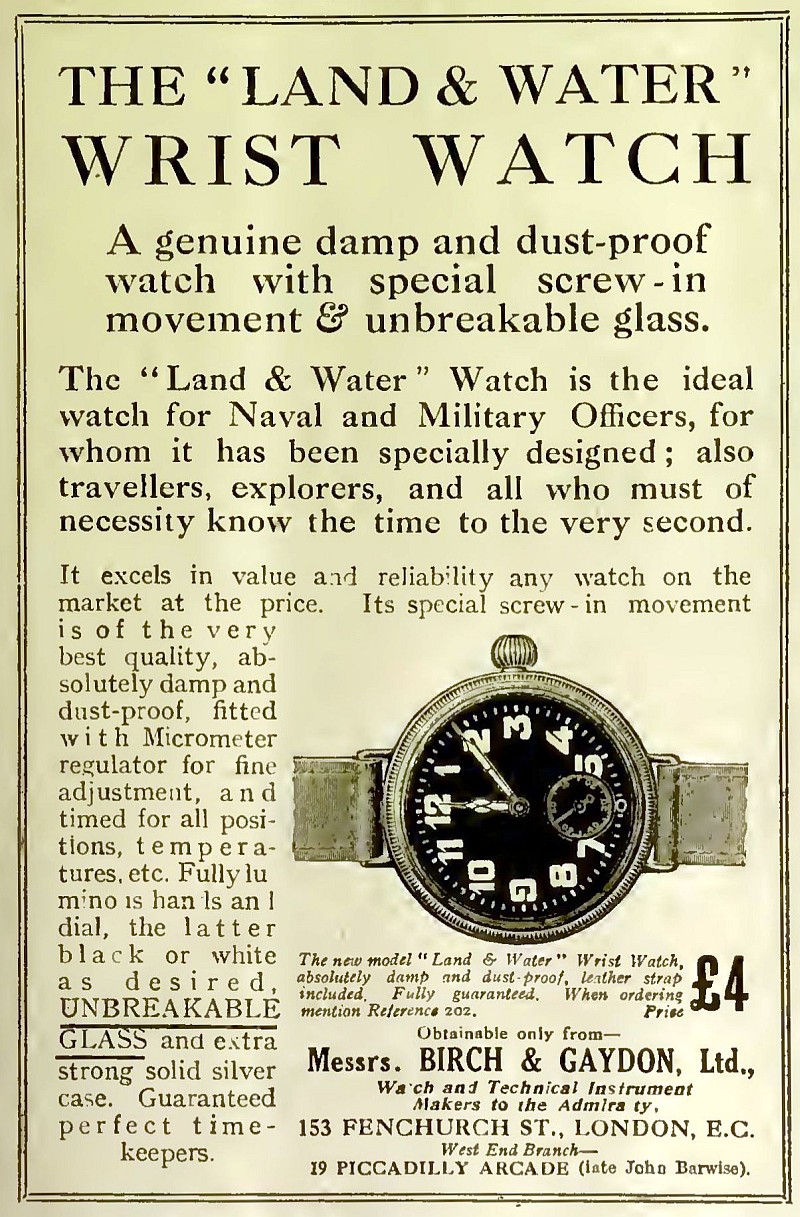 Many Zenith wristwatches were sold during the Great War by Birch & Gaydon under their brand name "Land & Water". The name "Land & Water" appears to have been taken from a patriotic British newspaper of the same name that was founded in 1914 to report on the progress of the war.

Land & Water magazine began as a section in the "County Gentleman" magazine. During the Great War this section was spun off as a magazine in its own right and covered the war in great detail. It was edited by the politician and writer Hilaire Belloc. The image here shows an advert by Birch & Gaydon from Land & Water magazine dated 2 November 1916 for a Land & Water wristwatch. If you click on the advert you should get an enlarged version that is interesting reading. This is the earliest advert I have yet found for these watches.

The hallmarked cases of these watches don't carry Birch & Gaydon's sponsor's mark “B&G”, instead they were imported by the British branch of the Zenith Watch Co. and carry the sponsor's mark ZWC in a triangle.

There were two different case designs used for Land & Water wristwatches during the Great War:

In the advertisement, the Land & Water wristwatch is said to be “absolutely damp and dust proof”. This is an exaggerated claim. Although the screw back and bezel makes these areas of the case well sealed, there was no attempt to seal the entry into the case of the winding stem. The Type 1 case has a case stem which must be withdrawn to unscrew the movement, and uses negative or America set movements which require a detent mechanism in the stem tube as described in the detailed section about this case. It would be very difficult, I think impossible, to make this area waterproof. The Type 2 cases use a conventionally stem set movement, and again there was no attempt to seal the entry of the stem into the case to make it waterproof.

The Land & Water Type 1 wristwatch in a silver case with unbreakable glass and luminous dial cost £4 0 0. A special non-magnetic model with a white dial was £4 10 shillings, and a white dial model in a 9 carat gold case was £8 0 0

Both of these different designs of Land & Water wristwatches have Zenith movements.

The Land & Water name was an important brand for Birch & Gaydon and they continued to use it after the Great War when the Type 1 and Type 2 designs were created.

I have seen a watch marked Birch & Gaydon Land & Water with a Zenith movement in an 18 carat swing ring case manufactured by Dennison. The case has Birmingham Assay Office hallmarks for 1934/35, whereas the Zenith movement serial number dates its manufacture to 1938, and an inscription on the back is dated September 1939.

The movement and inscription dates tie together well, but at first sight it seems a long time between 1934/35 and 1938/39 to hold an 18 carat gold case in stock before inserting a newly made Zenith movement. However, since the world was gradually recovering from the great depression this could have happened, so this appears to be a later third type of Land & Water case.

The Birch & Gaydon Land & Water wristwatch with a one piece case and screw bezel is quite unusual. The case is sometimes mistaken for the eponymous screw case designed and patented by François Borgel, but it is in fact quite different.

At first glance this seems to be a bit of a mystery, it is not obvious how the rotating joint is formed. The secret is that the bezel is made in two parts. My drawing of a cross section through a Land & Water Type 1 case shows that the bezel has two parts, a lower ring that has an external screw thread which engages with the threads in the case, and an upper ring which carries the glass.

The two rings that make up the bezel are a marvel of the case maker's art. They are extremely thin and delicate and it it is difficult to imagine how they were made, and especially how the screw thread was formed on the outside of the lower ring. They usually fit together so well that it is difficult not to believe that they are one piece, hence the apparent mystery of how the carrier ring is held. 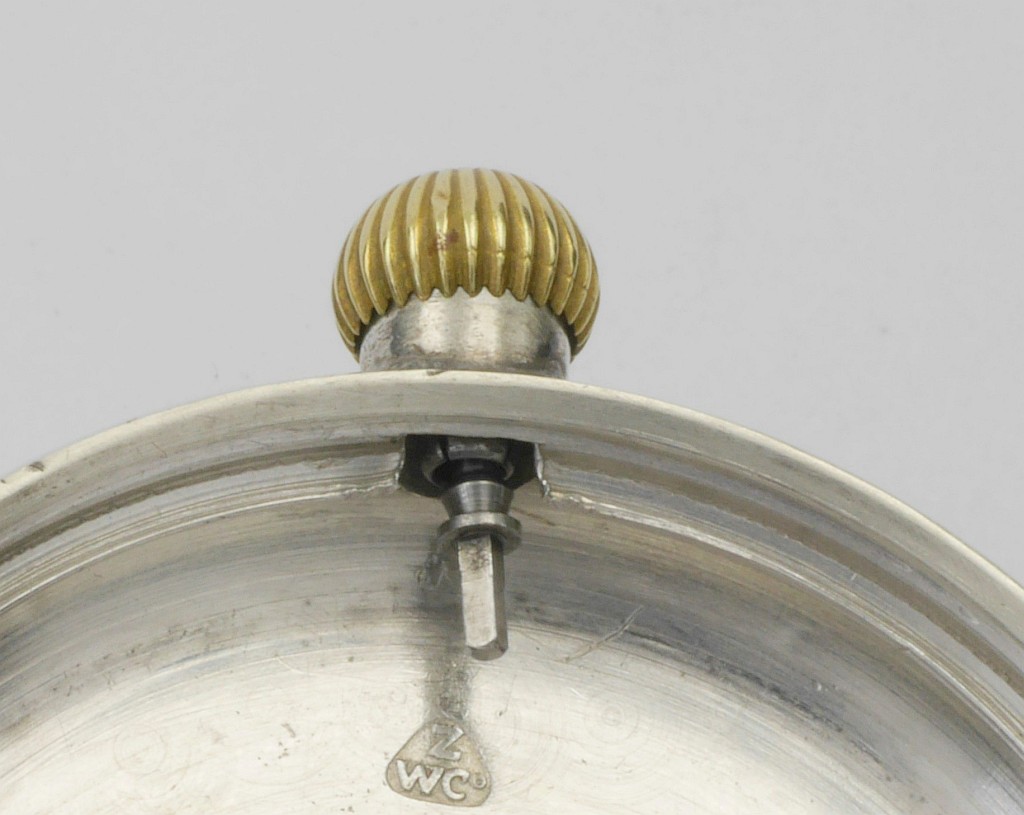 The lower bezel ring has coin edge milling for grip, whereas the upper bezel ring is smooth, you can see this in the photograph of the watch. Once you know this you can gently insert a fine blade into the joint and gently pry them apart, working round as you do so that you don't distort them. I use a blade from a Stanley knife; gently inserting this all the way round the two parts of the bezel are easily and safely separated.

Once the two parts of the bezel are separated the upper ring is lifted away and the lower ring slides down and off the carrier ring. The case screws are then removed and the movement and dial can be pushed out of the carrier ring.

The movement has "negative set" or "American system" keyless mechanism, so a short "case stem" and the crown are attached to the case. A detent mechanism in the stem tube on the case holds the crown in either the winding or hand setting position.

This is also shown in the cross sectional drawing. The detent mechanism is formed by a split spring sleeve, coloured green in the drawing, which holds the stem in position axially but allows it to rotate. The drawing shows the case stem held in the normal "winding" position. When the crown is pulled away from the case the fingers of the split sleeve are pushed aside by the tapered swelling on the stem and then grip it again at the waist on the other side of the swelling. A flange stops the stem being pulled out any further. 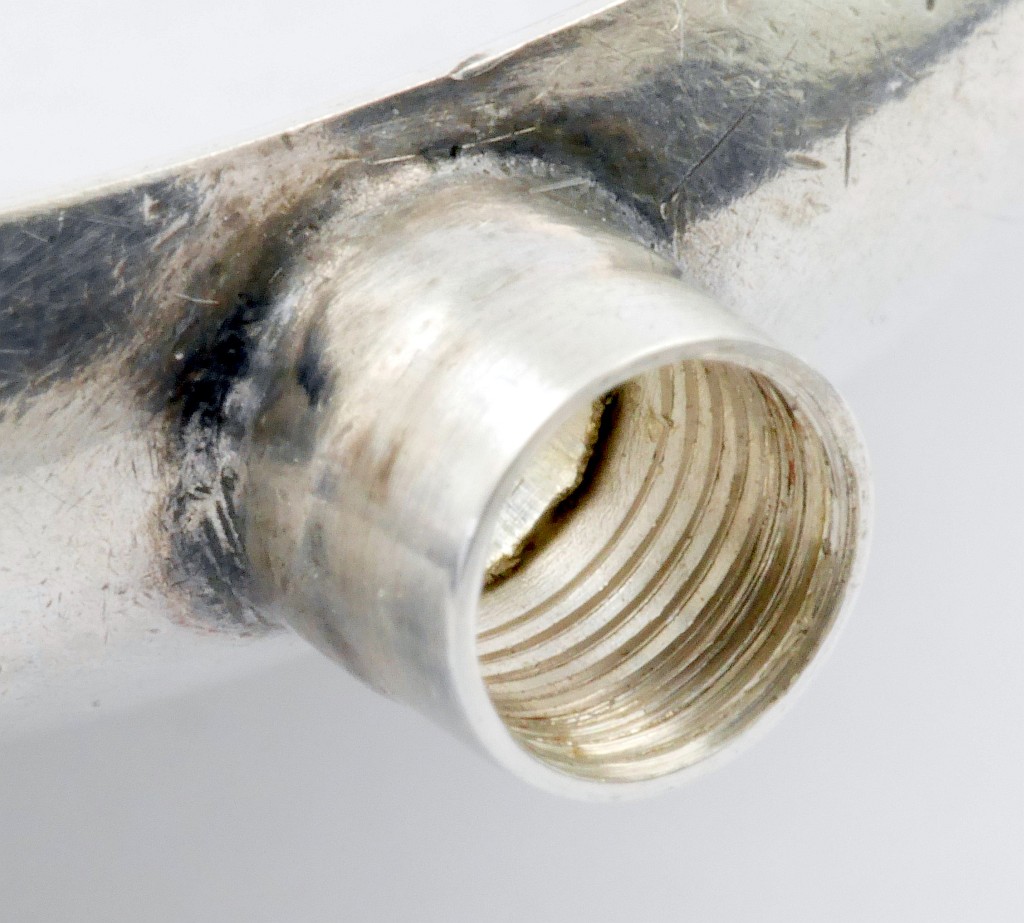 There are three parts in the stem assembly, the case stem itself, the split sleeve, and an externally threaded hollow plug, coloured red in the cross sectional drawing, which screws into the stem tube and holds the sleeve in place. The sleeve is held axially by the threaded plug but is free to rotate. When it was made the sleeve was fitted into a socket on the end of the plug and the end of the plug swaged over to hold the stem in place. This is different to the arrangement in pocket watches where the plug and sleeve are separate, the sleeve dropping into the pendant onto a shoulder and the plug screwing down to hold it against that shoulder. In this wristwatch case the stem tube isn't thick enough to machine a shoulder for the sleeve to sit on, which is why it is attached to the plug. In the picture of the stem tube you can see a small land that is just big enough to screw the plug down on to but not big enough to allow the same arrangement as in a pocket watch.

Bearing in mind that the square on the end of the stem is only about 1mm square you can get an idea of how tricky it would be to make one of these. The spring sleeve is made from high carbon steel and was hardened and tempered to make it resiliently springy. The stem itself would also be made from high carbon steel and hardened to reduce wear. They have survived the hundred years since they were made in remarkably good condition and work perfectly.

The images below are of the Birch & Gaydon Land & Water wristwatch that the case stem was taken from.

These are "as found" pictures before cleaning and restoration. The hands are wrong, they should be poire-squelette shape skeletonised radium luminous hands like the ones shown in the 1916 advert.

The Zenith movement has the clever micro regulator mentioned in the 1916 advert. Those with sharp eyes will notice that the click spring appears to be slightly short and not pressing the recoil click correctly, which could cause problems when winding so needs to be sorted.

The inside case back case of this watch (not shown) has Swiss hallmarks, 925 and a single standing bear, and Glasgow import hallmarks for 1916/1917. Thesponsor's mark is Zenith's own registered ZWCO in a triangular shield. 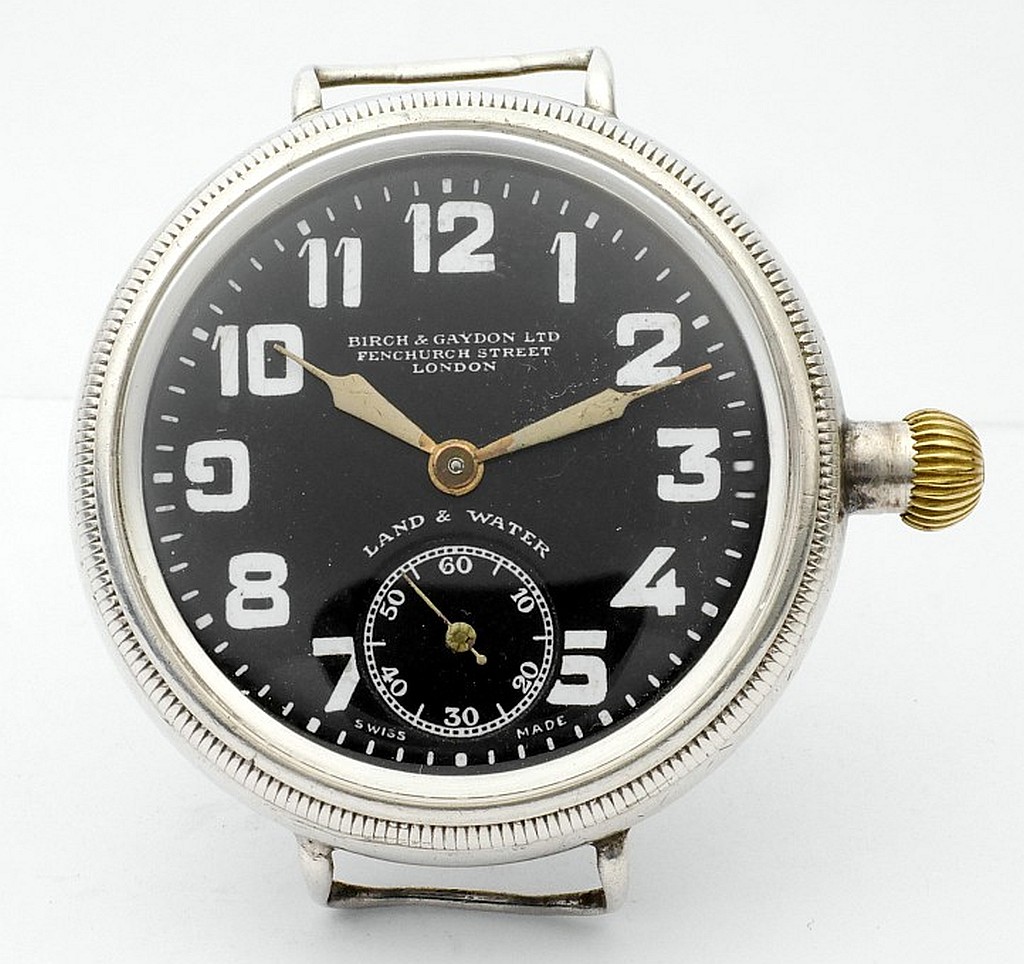 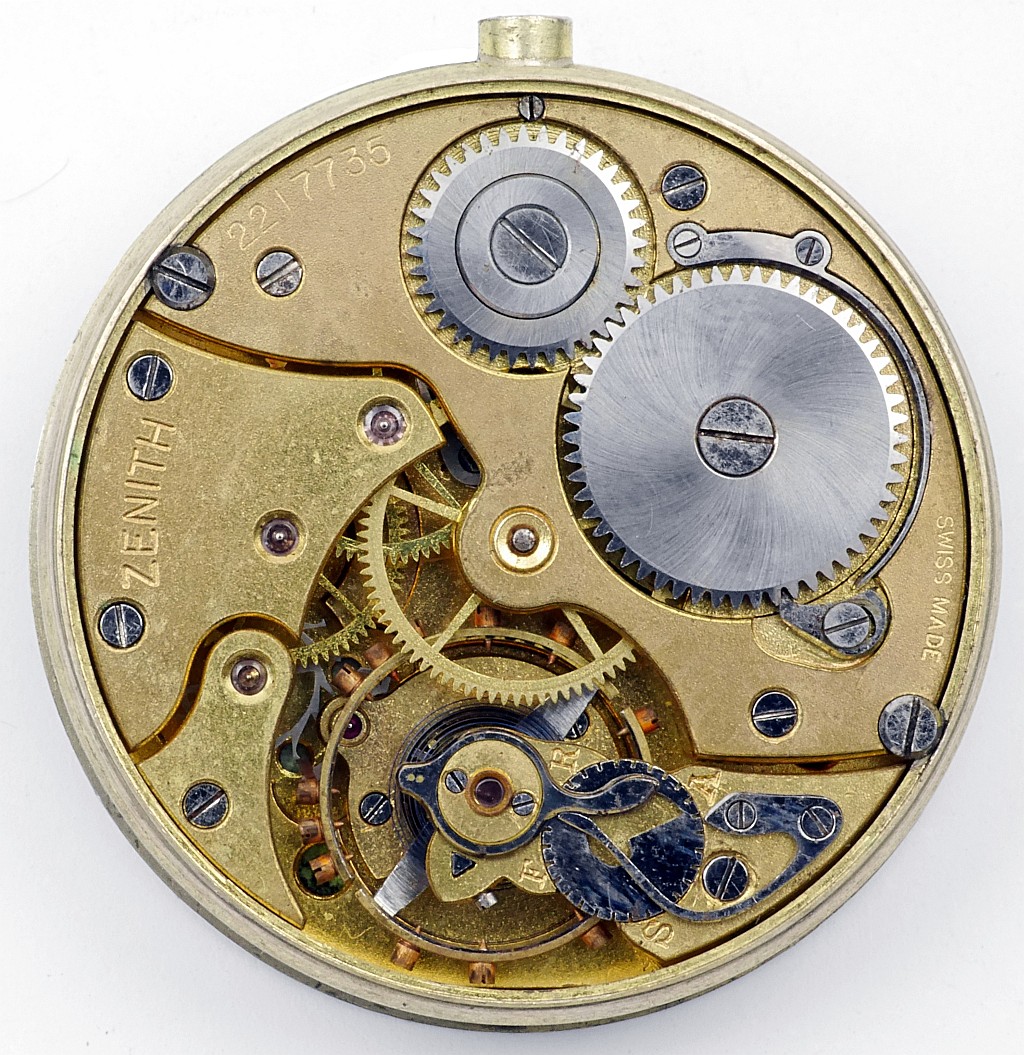