The section reproduced here is from my page about Rolex. 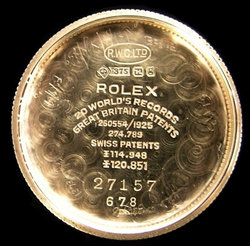 An interesting feature of the patent for the case is that it begins by saying that the invention refers to a shaped or "forme" watch case (i.e., different from the usual round or circular form). The patent goes on to illustrate and describe an octagonal case and the means by which such a case can be made watertight. The only reason that I can think of for making the case octagonal shape is to make it more difficult to seal than a round case, and therefore to have something to patent.

Referring to the cross section below, the movement is held in an externally threaded carrier ring 5, which passes through the centre of the shaped case. The front bezel and case back, both numbered 11 in the drawing, screw onto the external threads of this carrier ring, rotating in opposite directions and clamping the middle part of the case between them to form the water tight seal.

The design of the threaded carrier ring is so reminiscent of the screw cases designed by François Borgel that it is not surprising that many people think the Borgel company, then owned by the Taubert family, must have been involved in the design, but no link has yet been proven. In their book on Rolex, Dowling and Hess note that Rolex produced a small series of watches using the original one-piece Borgel screw case in 1922. In fact, the relationship between Borgel and Rolex goes back to way before the 1922 date mentioned by Dowling and Hess. The image here shows a Borgel case with London import hallmarks for 1910 and the W&D sponsor's mark entered by Wilsdorf and Davis. 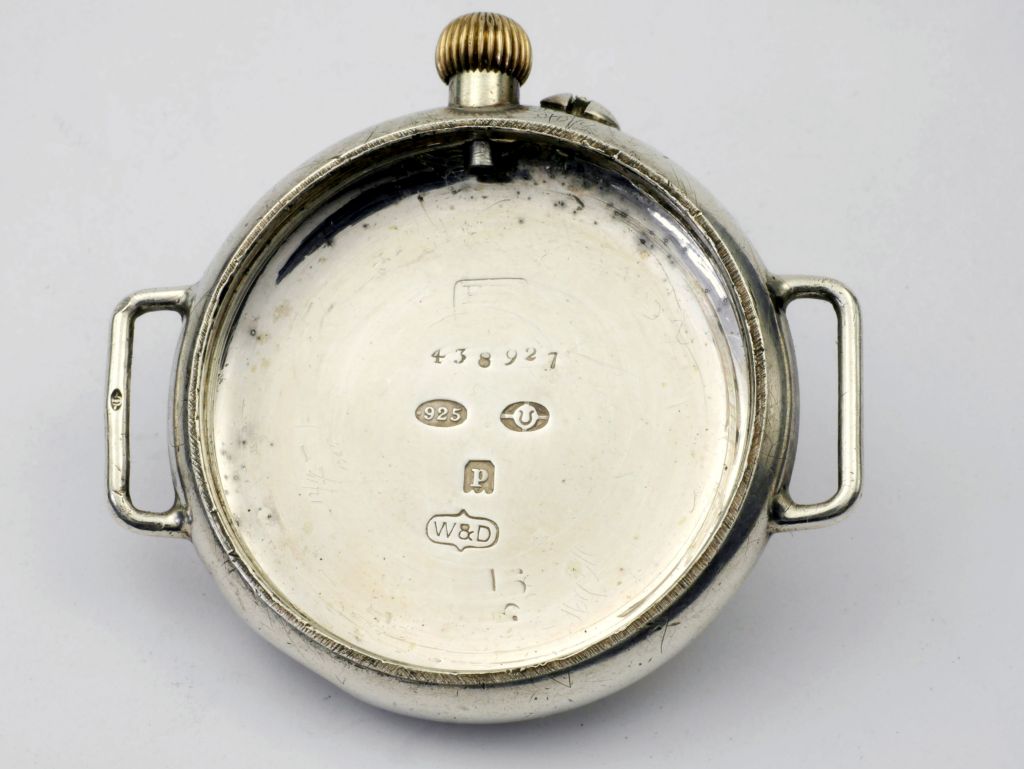 Borgel case with London hallmarks for 1910 and W&D mark

Wilsdorf was working on the Rolex Oyster in the years before it was revealed in 1926, and the Borgel company was taken over by the Taubert family in 1924, so perhaps Wilsdorf didn't want to approach what was essentially a new company. The Tauberts would also most likely have insisted that their Borgel trademark of the initials FB over a Geneva key to appear in any cases they made, which wouldn't have suited Wilsdorf.

The threaded Oyster case backs were milled with small radial grooves like the edge of a coin to provide the grip needed to tighten and release them by hand, the same as François Borgel had been using on the bezels of his screw cases since 1891. To get a tighter seal than possible by hand tightening in 1926 Wilsdorf designed a tool that engaged with the millings and enabled greater torque to be applied than by hand. On 3 October 1929 Wilsdorf applied for a patent for this tool, which was published on 16 January 1931 under N° CH 143449. The millings on the case backs of modern Rolex watches, and the case openers used today, derive from these early designs.

In the first Oyster case the screw thread on the pendant was cut into a pendant that was made as part of the middle section of the case. If the case was gold or silver, as the vast majority of watch cases were in the 1920s, the threads in these soft metals wore very quickly as the crown was unscrewed every day to wind the watch. This was overcome to a degree by making the pendant a separate steel tube that was harder wearing, and could be replaced if necessary. The problem of thread wear was only really overcome when automatic winding was introduced, which dramatically reduced the number of times that the crown needed to be unscrewed.

Oyster cases accumulated a series of patent numbers inside their backs over the years as listed below. If you know of one I have missed, please let me know. Later models simply had “Patented in all Countries” rather than the long list, perhaps to save on the cost of engraving, or because there wasn't room to fit them all in!

Who Made the Oyster Cases? 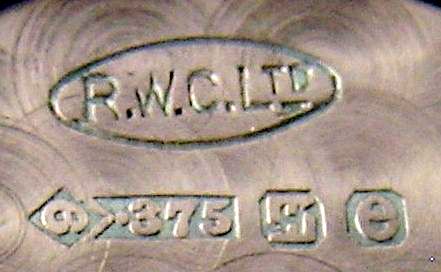 Rolex do not reveal information such as the identity of the case maker who supplied the cases for the first Rolex Oysters. However, beginning in the mid 1920s Swiss watch cases of gold and platinum had to be marked to identify the case maker. These marks, called Poinçons de Maître, were very small, and the identity of the maker was encoded, so they are not well known. I am not going to go into this in detail here, you can find more about it on my page about Swiss Poinçons de Maître, but the important point is that these marks can in principle be read to identify the maker of a watch case. The problem is that they are so small they usually can't be read from photographs, at least not at the resolution commonly published on the internet.

Thanks to Crispin at Oldetimers.com I was able to examine nine high resolution pictures of early Oyster cases. From these I was able to date the cases from the date letter of the British import hallmarks, all impressed by the Glasgow Assay Office, and to read the symbols and numbers of the Poinçons de Maître (PdM). Since then I have also seen a case with Glasgow Assay Office import hallmarks and the date letter "d" for the year 1926 to 1927. All the cases bore the sponsor's mark of "R.W.C.Ltd" inside an oval shield, both the letters and shield being incuse, that is impressed into the plate rather than being in relief or cameo.

The image shows a typical Glasgow Assay Office import hallmark for 1927 to 1928. Reading from the top there is the sponsor's mark R.W.C.Ltd which shows who or what company submitted the item for hallmarking, then below that the sideways "9" and "·375" standard mark for nine carat gold, Glasgow Assay Office town mark for imports of two prone and opposed "F"s and finally the date letter "e" for 1927 to 1928. Date letter punches, properly called the “assayer's mark”, show who was responsible for the assay and therefore were changed each year when new Wardens were elected. This was part way through the calendar year, so a hallmark date letter refers to parts of two years. For brevity most tables of hallmark date letters show only the first year in which the date letter punch was used. The Glasgow date letter was changed on 1 July each year, so a case with a Glasgow Assay Office date letter “d” was marked between July 1926 and June 1927. There is more about this type of mark on my page at British import hallmarks. 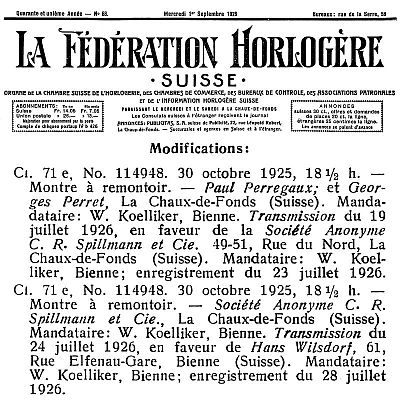 The hallmarks cover a ten year period from July 1926 to June 1937 and all the cases, except the last, have the Poinçon de Maître of a hammer head bearing the number 136. This mark shows that the cases were made by the company of C. R. Spillmann & Co SA of La Chaux de Fonds, and that C. R. Spillmann & Co SA were the makers of the first Rolex Oyster cases.

The company C.R. Spillmann & Co SA was involved in the acquisition by Wilsdorf and Rolex of the rights to the Perregaux and Perret patent for the screw crown, CH 114948.

The record from La Fédération Horlogère Suisse shown here records the transfer in October 1925 of the rights to the Perregaux and Perret patent CH 114948, first to C.R. Spillmann et Cie, and then onwards from Spillmann & Co to Hans Wilsdorf. Together with the Poinçons de Maître from the Oyster cases dating back to 1927 this shows that Spillmann & Co not only made the waterproof cases of the first Rolex Oysters but was heavily involved in the design of, in fact were probably the actual designers of, the Oyster waterproof case. 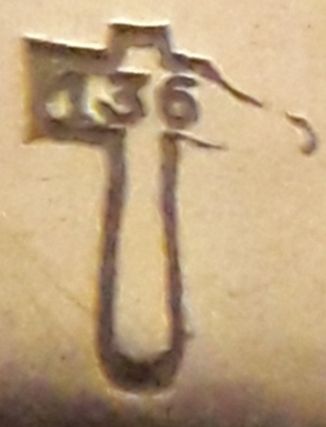 The PdM No. 2 mark of a hammer with handle and the number 136 shown here is in the case of a Rolex Oyster with Glasgow Assay Office import hallmarks for nine carat gold, the date letter "d" for 1926/27. This is interesting because the vast majority of early Rolex Oyster cases that I have seen have PdM No.1, the hammer head. The registrant of PdM No. 2, the hammer with handle, with the number 136 is not recorded in the 1934 list, but given the registration of PdM No. 1 with number 136 to C.R. Spillmann & Co S.A., It is safe to say that PdM No. 2 the hammer with handle No. 136 must also have been registered to C.R. Spillmann & Co SA.

In later years C. R. Spillmann & Co SA specialised in cases for chronographs, making the cases for all of the early Omega Speedmasters and most of the Rolex Daytonas, until Rolex bought the Spillmann company to bring case production “in house” exclusively for Rolex. Thanks to James Dowling for this information.

The company of C.R. Spillmann & Co SA were listed as makers of gold watch case in la Chaux de Fonds. An obituary in La Fédération Horlogère Suisse recorded that Charles-Rodolphe Spillmann died on September 7th 1938. He was the founder and managing director of the company. He was also a founder and member of the executive committee of the Society of Swiss watch case manufacturers. The factory building still exists in la Chaux de Fonds, it is listed as a Swiss heritage site of national significance.

The C.R. Spillmann & Co SA Poinçon de Maître PdM No. 1/136 was cancelled on 5 April 1988, presumably as a result of the takeover of the company by Rolex. The address given in the notice of cancellation is La Chaux-de-Fonds.