The section below is from my page about Watch Cases and Crowns.

Watches are traditionally divided into two broad categories: savonnette or Lépine, which in English are called hunter or open face. In old British catalogues, open face watches were sometimes referred to as crystal watches.

The terms savonnette or Lépine are used for a type of case and also the layout of a movement.

The distinction doesn't really apply to key wound and set movements, which can be put into a case in any orientation, provided that the dial is in the correct orientation for the case. But when stem wound and set keyless movements came along, their layout had to be made different depending on what type of case they were to be used with.

The basic rules about cases were:

This neat division lasted for centuries until the wristwatch came along. The fundamental objective of the wristwatch was to be able to read the time while leaving the hands free to do other things; the left hand holding the reins of a horse, or a rung on a trench ladder preparatory to going “over the top”, while the right hand holds a sword or revolver. This required an open face watch.

An open face Lépine watch has the crown in wrong position, at 12 o'clock where one lug for a wrist strap needs to be attached. A savonnette movement has the right layout, but opening the lid to read the time requires using the right hand and defeats the purpose.

The key to the successful wristwatch was the paradoxical use of a savonnette movement in an open face Lépine case, which has caused confusion about the use of the two terms ever since.

Sometimes open face pocket watches are seen with the crown at 3 o'clock and small seconds at 6 o'clock, which means that a savonnette layout movement has been put into an open face Lépine pocket or fob watch case. These are usually American made pocket watches, where they were called “side winders”. Why this was done I have no idea, there is no technical reason for or against it, it is just a question of style and convention. 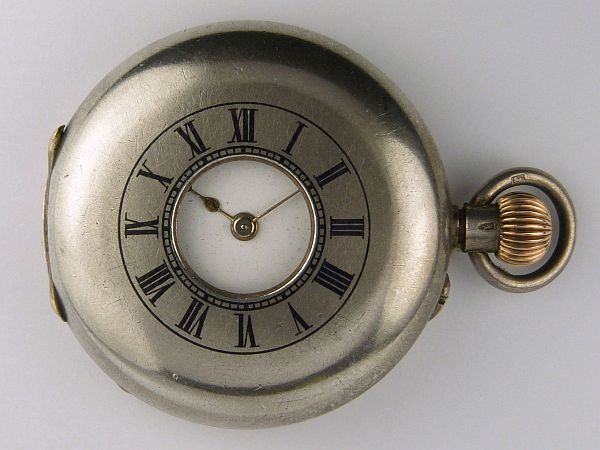 Demi Savonnette or Half Hunter

Savonnette or hunter watches have a hinged metal lid that closes over the front to protect the crystal. When the lid is closed the shape of he watch case resembles that of a small round cake of soap with slightly domed top and bottom, called in French a “savonnette”, hence the name. The English name arose because fox hunting men found it convenient to be able to open their watch and read the time with one hand, while holding the reins of their “hunter” (horse) in the other hand.

A savonnette or hunter watch, or watch case, sometimes called a “full hunter”, has a metal lid that completely covers the dial so that the time cannot be read without opening it. They are the most robust design of watch, but visually unattractive and a nuisance to use.

The watch in the image here is a demi-savonnette or half hunter, which means that it has a small round window in the middle of the lid so that the time can be read without opening the lid. These are sometimes called “Napoleons” because there is a story that the Emperor got so frustrated with having to open the lid of his hunter that he took a knife and made a circular cut out in the lid. They are easier to read than a watch with a full hunter lid, but the small window makes reading more difficult and reduces the accuracy to which the time can easily be read – the small seconds is not even visible.

From this watch you can see the savonnette or hunter layout with the 12 at the top, the hinge for the lid at 9 o'clock and the crown at 3 o'clock. There is a small seconds dial at 6 o'clock, but this cannot be seen with the lid closed.

The Lépine watch was invented in the eighteenth century by Jean Antoine Lépine who radically redesigned the standard watch movement of the time to make it much thinner. Because of Lépine's role in creating the modern design of watch movement, at various times his name has been used in to name different aspects of the design. See my page about Jean Antoine Lépine for more details about this important but little known maker.

Lépine made movements thinner by moving the balance down from above the top plate into the same plane as the rest of the wheels, pivoted in the bottom plate. The top pivots of the balance and train wheels were pivoted in cocks or bridges in place of a single top plate. Lépine created this design to make watches thinner, and this style of movement was known as the Lépine calibre.

Watches could also be made thinner by not having a lid or cover over the crystal, a design called "open faced". Naturally, in his desire to create the thinnest possible watches, Lépine mostly made open faced watches and, in time, Lépine was taken to mean any open faced watch, as opposed to a savonnette or hunter watch.

Open face Lépine watches usually have their small seconds at 6 o'clock as this one. There is no technical reason for this, it just seems to “look” right. It does mean that the layout of Lépine movements is different from that of savonnette movements, so that watch manufacturers had to make two different movements. These usually used identical components, the only difference between the two is that layouts of the bottom and top plates or bridges are different.

When wristwatches were created, it was obvious that the 12 o'clock should be at the top when viewed on the wrist, where the upper part of the strap would be attached, and that it would be most convenient if the crown was at the 3 o'clock position and the small seconds at 6 o'clock. This meant using a savonnette movement. But the principal reason for wearing a wristwatch was to make it easy to read the time, and if the watch case was fitted with a lid, it either required the use of the other hand on the other wrist to open the lid, or if a demi hunter lid was fitted, the accuracy of reading was reduced.

It was abundantly clear right from the outset that to be most convenient to use, a wristwatch had to be open face. The key to the successful wristwatch was therefore to fit a savonnette layout movement into a case without a lid, an open face Lépine case.

The layouts of movements, which gives different locations of the small seconds and pendant, which in stem wound watches carries the crown, differs between savonnette and Lépine movements for ergonomic reasons.

Savonnette watches usually have a button on the top of the stem to release the catch which holds the lid closed, and it is convenient to operate this button with the thumb, the watch being held in the palm of the hand. The lid then opens towards the fingers. Because of this, savonnette pocket watches have the dial arranged so that the pendant, the tube projecting from the case by which the watch can be suspended, is at 3 o'clock and the hinge of the lid opposite this at 9 o'clock. The small seconds display is at 6 o'clock.

Open face pocket watches are usually made so that the pendant is next to the 12 o'clock position on the dial. If a savonnette movement was used, the small seconds display would be at 9 o'clock, which somehow instinctively looks odd. So for open face pocket watches the movement was rearranged to put the arbor of the fourth wheel in line with the projected axis of the stem. This meant that with the crown at 12 o'clock, the small seconds display was at 6 o'clock. Because of its use in open face watches, which came to be called Lépine watches, this movement layout has itself come to be be called Lépine, although it was not much used by Lépine himself. 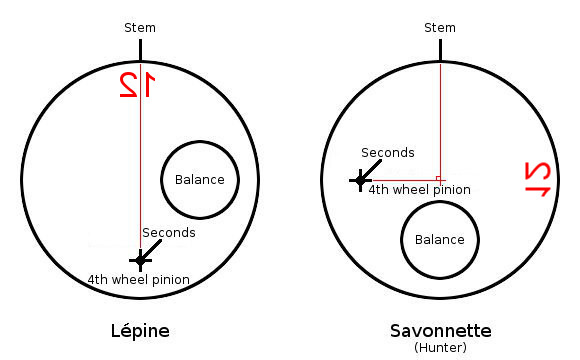 The figure here shows how to distinguish between savonnette and Lépine movements. The movements are shown from the top, as if looking into the back of a watch, and the stems are at the top. This is the standard way that movements of any layout are illustrated in catalogues and movement identification books, and it makes it much easier to recognise movements if they are presented in this way. The red 12s show where the 12 would appear on the dial; they are reversed because the dials are on the opposite side of the movements in these images.

The critical item is, of course, the location of the fourth wheel whose arbor carries the seconds hand, which determines where the small seconds will appear on the dial, but it is much easier at a quick glance to locate the balance.

Distinguishing between savonnette and Lépine watches is, of course, simple. If the case has a lid, it's a savonnette or hunter; if it doesn't have a lid it's an open face Lépine. But what about an open face wristwatch with the crown at three and the small seconds at six; is it a Lépine or a savonnette? In fact it's neither; it's simply a wristwatch!

There are several meanings for Lépine in watch terms:

When the wristwatch was created it was natural to arrange the dial with the 12 at the top and the crown at 3 o'clock for both convenience of access for winding and for attaching the strap. This of course is a savonnette layout. But giving a wristwatch a lid would have defeated one of the principal benefits of a wristwatch, that it was possible to look at the time without using both hands, so wristwatches were almost universally open face.

The key to the successful wristwatch was therefore the paradoxical use of a savonnette movement in a Lépine case.