This particular blog page is unusual in that it isn't extracted from any other page but stands on its own as a disussion about watch sizes, in particular the sizes used to measure and characterise watch movements. 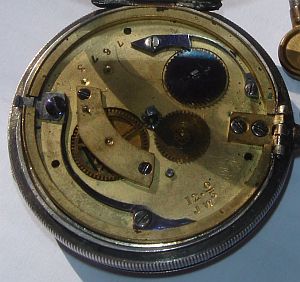 The photograph here shows the dial plate of an English lever watch. The initials JW are for John Wycherley of Prescot, an English pioneer of mass produced rough movements. In 1866 Wycherley set up a factory in Warrington Road, Prescot, with three floors and steam power to produce by machinery plates and other parts that were interchangeable. Wycherley also introduced a system of uniform movement making with defined movement sizes, so that cases and dials could be ordered without having to send the movement for them to be made to fit.

Above Wycherley's initials are a set of numbers that define the essential dimensions of the movement, often called in English watchmaking the "calliper" of the movement, derived from the callipers used to measure the diameter of the bottom (dial) plate. The equivalent Swiss/French term is "calibre" and literally means much the same thing, although calibre is often used in reference to the specific layout of a movement as well as its size.

The first, larger, number on the plate is a 12. This gives the diameter of the movement. It is followed by a "pellet" • and then a zero over a 3 that gives the pillar height. The pillars in an old watch hold the top and bottom plates apart, so the pillar height determines the gap between the plates.

This calliper size is called the "Lancashire Watch gauge system" for determining watch sizes. Size zero formed the base of the scale with a plate diameter of 1 inch plus 5/30 inches for the mounting flange or "drop", giving a base for the scale at zero of 35 thirtieths of an inch, or 1.167″. Each 1/30 inch increased in diameter increments the gauge size by one. For smaller watches, the scale counts down from zero, indicated by 2/0, 3/0 etc. A glance at the table makes it clear.

It might be thought odd that the gauge was based on 1/30 part of an inch rather than some less unwieldy fraction, but 1/3 of an inch was the smallest Anglo-Saxon unit of length and was called a barleycorn, because it was nominally the length of a corn or grain of barley. This measurement is still the basis for shoe sizes in Britain. When early watchmakers needed to specify dimensions more closely, it was natural for them to think in terms of 1/10 of a barleycorn.

The micrometer, with its associated division of the inch into "thous" or thousandths of an inch, was not invented until the nineteenth century. It might be thought that it would be difficult to make something as precise as a watch without a means of accurate measurement, but the first watches were made by hand finishing parts so that they all fitted together in one watch, they were not interchangeable between different watches. It was the development of accurate measuring instruments that allowed the mass production of watches, by enabling parts to be made to uniform sizes and interchangeable.

The Lancashire gauge system was adopted by American watch manufacturers, no doubt because before watches started to be manufactured in America, watches and watch movements were imported from England, and the Lancashire gauge size would have been used to specify the size of the movement, and hence the name for the size of the watch. American watches are referred to as, e.g. 16 size or 16S.

The gauge size is the diameter of the movement, not the size of the watch case, which is what you see and feel. A size 18 American railroad watch for instance should have a movement 1 + (18+5)/30 = 1.767 inches diameter, but the overall diameter of the case will be around 2.25″ or 56mm.

It always seems fortunate that the conversion factor between inches, a unit based on one twelfth of the length of an Anglo-Saxon King's foot, or the width of a carpenter's thumb, or three barleycorns (whichever you prefer), and millimetres, which are based on the distance between the North Pole and the Equator along the meridian through Paris, should be exactly 25.4; a number that is nice and easy to remember rather than having a long string of decimal places. In fact this wasn't always so. In Britain and Commonwealth countries, and in America, the inch was historically legally defined as one thirty sixth of a yard. Before 1959 the British imperial yard and the American yard were not exactly the same, and consequently British and American inches were slightly different, and neither was exactly 25.4mm. In 1930 the British Standards Institution adopted an inch of exactly 25.4 mm, the American Standards Association followed in 1933, and by the mid 1930s many countries had adopted this "industrial inch", but these remained industrial rather than legal standards. In 1959 the "international yard" was defined as 0.9144 metres and this was adopted as the legal definition in Britain and Commonwealth countries and in America. The American legal inch was reduced by 2 millionths of an inch and the UK legal inch increased by +1.7 millionths of an inch.

Swiss and French watch movement sizes are usually given in lignes (pronounced ‘line’).

A ligne is a “douzième” or 1/12 of an old French inch, which itself is 1.0657 of an English inch. So a ligne is about 2·256mm. In the context of watches the measurement douzième usually means a twelfth part of a ligne, also sometimes called a point. This can be measured with a douzième gauge.

The lignes dimension is written in short as three prime symbols ''' in a similar way to the double prime sign ″ for an inch. For example 13''' means thirteen lignes, a common size for a man's wristwatch movement.

Watches were made in sizes from 2½ lignes, a very small ladies' baguette movement, to 20 lignes or more for pocket watches. The ligne size is often not an exact measurement, it is more of a general classification of size, so don't expect a 13''' movement to measure exactly 29·3mm.

Swiss made men's trench wristwatches from the Great War often have a 13 ligne movement, such as a Longines 13.34, and a case size of about 35mm diameter excluding the lugs and crown. This is a nice size even today when the fashion is for larger watches. The case is about 5½ mm larger than the movement.

References such as the Bestfit Catalogue list movements grouped into half lignes, or occasionally quarter lignes. The calculator below returns the ligne size to half a ligne, e.g. 12½ or 13 ligne. The quarter ligne sizes are usually very few for men's size watches and are tacked on to the end of the half ligne sections, for a small watch movement you might need the quarter size.