This page gives a very short and quick guide to recognising and reading a traditional British hallmark. British hallmarks appear simple at first sight – it appears that you can just pick up a reference book and there you go. But it is easy to go wrong; hallmarking has a very long history and can be surprisingly complicated. 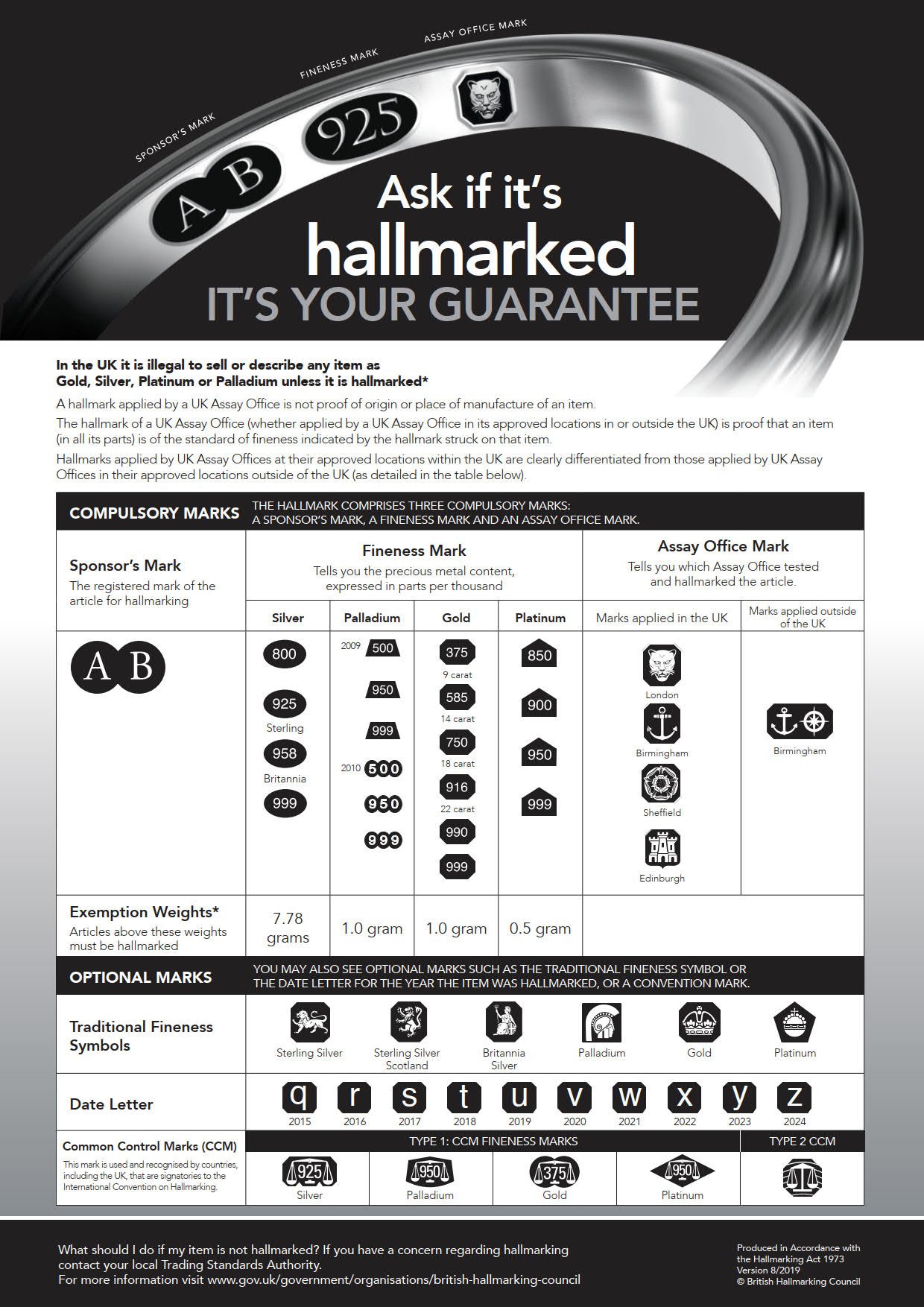 First we need to deal with the question of what is a hallmark? If you mistake another type of mark for a hallmark, you could waste a lot of time searching fruitlessly for information. The two simple rules are:

Also note that jewellery is very rarely hallmarked. Jewellery is generally exempted from compulsory hallmarking because stamping the marks would damage or destroy the item. Jewellers can voluntarily submit exempted items for hallmarking if they wish. Exempted items can legally be marked with the fineness by the manufacturer, e.g. 925 or 14C, but these are not hallmarks and have not been independently verified.

If the marks are not British hallmarks, then the page at Case Marks should help you to identify which country's hallmarks they are. Bear in mind that hallmarks are legally defined marks applied by an independent person or company who tests precious metals for fineness. A mark stamped by a manufacturer is not a hallmark, it is a trademark. There are thousands of trademarks and I don't attempt to cover them.

I started this page in September 2019. I intend to add things to it to make it better as time goes by, while still keeping it short. If there is something you think is missing or would like to see covered, please let me know via my Contact Me page.

A British hallmark on silver or gold, whether it is on a British made or imported item, must have at least the four specific marks listed below. I cannot emphasise this point too much; if at least all four of these marks are not present in some form, then it is not a British hallmark.

Note that the standard mark for 22 and 18 carat gold has two parts, a crown and the carat fineness. Don't count these as two marks! They are two parts of the standard or fineness mark and therefore count as only one of the four essential marks.

The hallmarks are usually separate, looking as if they were made by individual punches; only the composite foreign hallmarks introduced for watch cases in 1887 were made with a single punch. Sometimes there are additional marks to do with duty or Commemorative Marks stuck to celebrate major events, but the four marks described here are the absolutely essential ones, with links to fuller explanations. 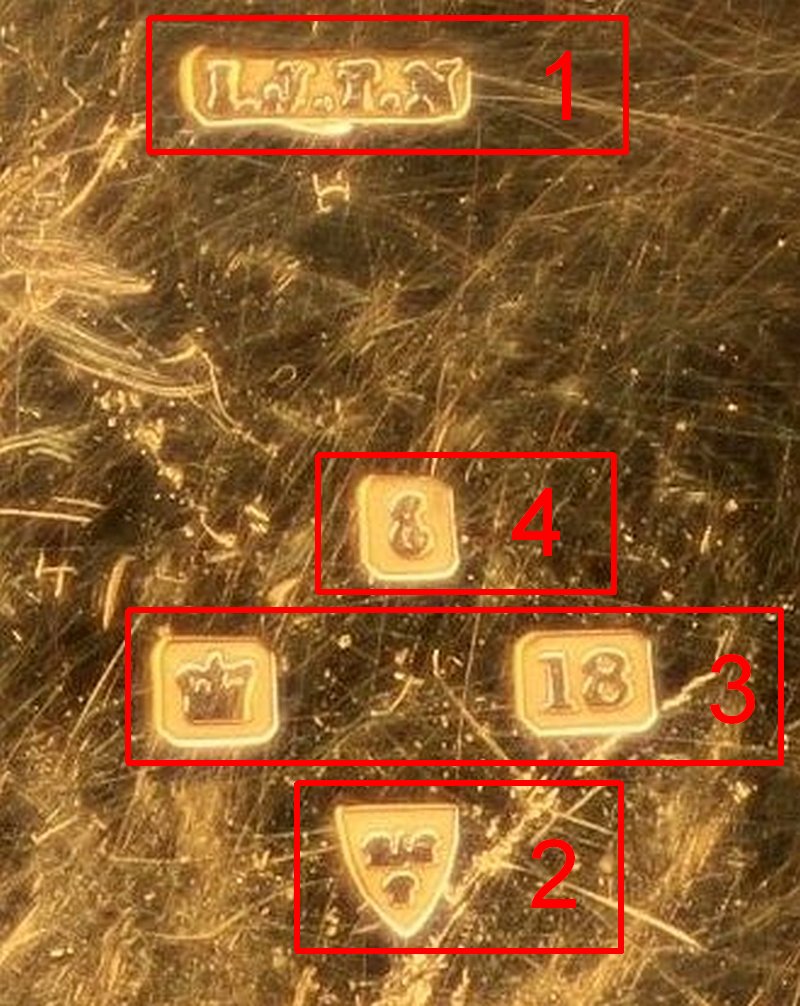 The image here shows the hallmarks in an 18 carat gold case. I have outlined the four parts in red and numbered them to correspond with the numbered list below. The sponsor's mark is I.J.T.N in cameo within a rectangular surround. The assay office is the Chester Assay Office, shown by the town mark of an upright sword between three wheat sheaves. The standard mark is the symbol of a crown and the number 18, the standard mark of 18 carat gold.

The date letter is rather difficult to read, which highlights an important point. Rather than blindly picking up a table of assay office date letters and scanning through it trying to find a match, the possible date range should be narrowed down first. Date letters have been applied to items by assay offices since the year 1478, but there are only 26 letters in the alphabet, of which the London Assay Office used only 20, so date letters are used over and over in repeated cycles, and each assay office had different date letter cycles. In addition to identifying the correct assay office, the correct cycle of date letters needs to be used. Just picking up a table and scanning through it, this date letter looks a lot like the script capital E of 1730. However, the I.J.T.N sponsor's mark was first entered at the Chester Assay Office by Isaac Jabez Theo Newsome in 1884, so we shouldn't even consider Chester date letters before 1884. This narrows the possible range down immensely and it is then easy to see that the date letter is in fact the script capital E of 1905 to 1906.

Without all four of these marks you do not have a valid British hallmark. Don't fall into the trap of thinking that any and all marks are hallmarks – there are no such things as American hallmarks for instance and it is easy to waste a lot of time searching for a hallmark if the mark isn't one. A hallmark is made by someone independent of the manufacturer of an item, required by law to confirm the claimed fineness of an item of precious metal. The term hallmark came about in 1478 when goldsmiths and silversmiths were first required to take or send their items to be tested and marked at Goldsmiths' Hall in London, to be independently tested and marked.

Experts If you watch the Antiques Road Show or similar programmes, you will often hear so-called experts say something like “This is the maker's mark for so-and-so and this mark shows that it was made in London and this is the date letter for 1845”. Now either the so-called expert doesn't know that the sponsor's mark doesn't show who made an item, that the assay office mark shows where it was hallmarked not where it was made, and that before 1975 hallmark date letters spanned two calendar years, or they aren't giving the full picture. If they do know the truth, why don't they say it? If you get chance to question one of these experts I would be interested to know what they say. The facts are all well explained in De Castro; if someone is not familiar with that book they have no right to call themselves an expert on hallmarking. 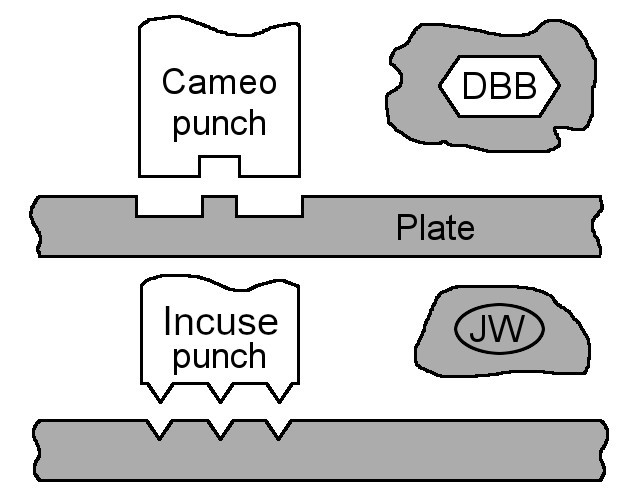 The sketch here shows the two types of punches used for stamping sponsor's marks and hallmarks.

The shield shapes around cameo marks, and around incuse marks if they have them, are an important part of a sponsor's mark. This applies to all the parts of a hallmark, but the shield shape is especially important for sponsor's marks where there are lots of similar sets of initials that must all be unique punches.

Date letters are always punched in cameo, the extra complication of a cameo mark over the simpler incuse mark makes them more distinct and less easy to fake. Note that the shield shapes around date letters were often different, simpler, on small items such as watch cases, because it is more difficult to make a fancy shaped small punch. Hallmarks in watch cases were made by ‘press punches’. These had all the separate hallmarks; town mark, standard mark and date letter, combined into one punch that was applied using a fly press. This gives the layout of the hallmarks a regular appearance, which forgers often did not understand or replicate.

One area that seems confusing is that gold and silver watch cases don't usually have a duty mark as a fifth hallmark. This is a cameo mark of the reigning sovereign's head showing that duty had been paid, and many tables of hallmarks show these. The duty was introduced in 1784, but after an outcry by watchmakers, watch cases were made exempt from the duty in 1798, so no watch case hallmarked after 1798 has this fifth mark.

In 1867 the Customs Amendment Act required that a letter “F” in an oval shield, signifying Foreign manufacture, be stamped alongside the usual hallmarks on all foreign made silver and gold items. Gold and silver watch cases imported between 1867 and 1887 should have this mark, but I have never seen one (don't get this mixed up with a date letter). It seems that the Act was passed without any powers to enforce it, and it remained unenforced until 1888 when a new Merchandise Marks Act became law. This Act introduced new requirements for hallmarks on foreign watch cases which superseded the requirements for the “F” mark. Other imported gold and silver items were still required to be stamped with the “F” mark, and a requirement was introduced that they be held under bond until this was carried out, finally ensuring that the law was complied with. 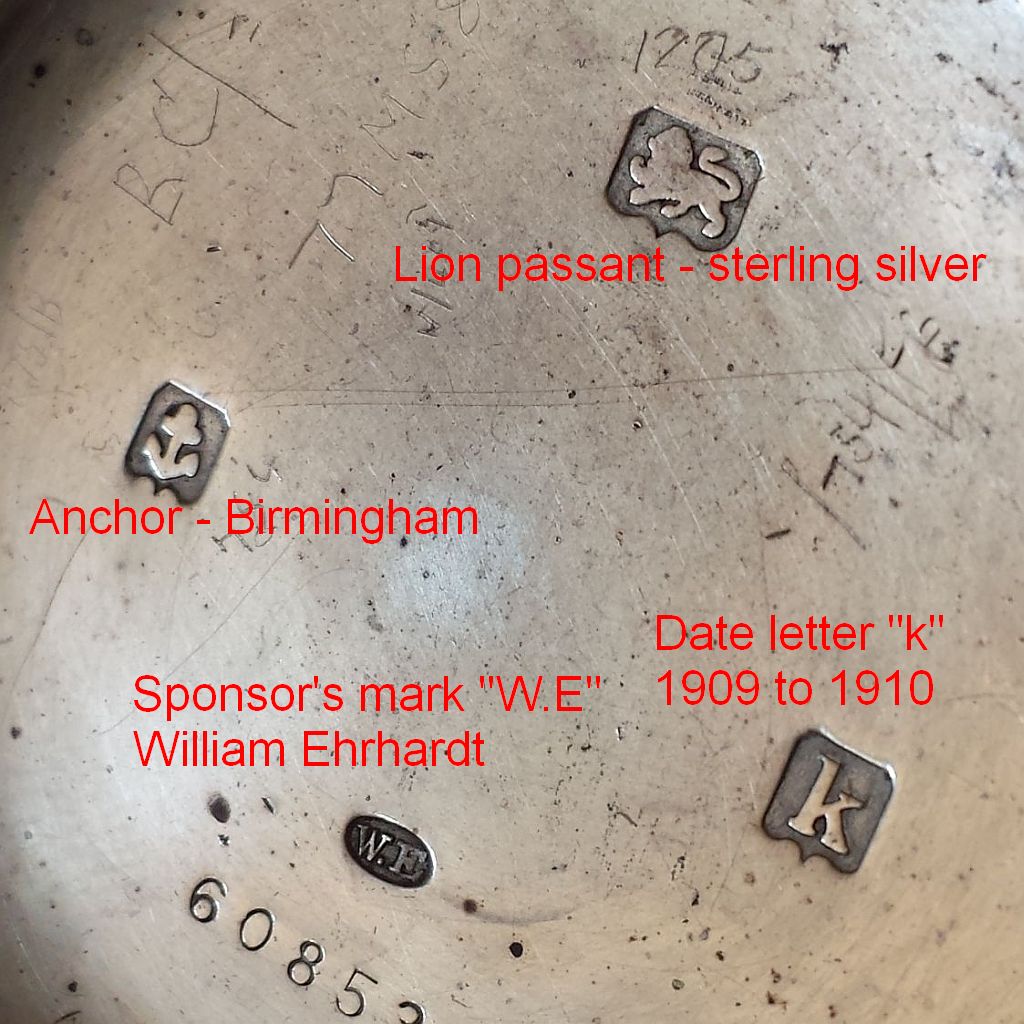 The hallmarks shown in the image here are from the silver case of a watch made by the company of William Ehrhardt Ltd. of Birmingham, England.

Reading from the top and then left to right the hallmarks are:

Note that the three marks applied by the assay office; town mark, standard mark and date letter, are laid out in a regular triangular relationship. Although it is not obvious from one case, this layout of the marks is the same for all the watch cases that were marked by that assay office in the same year. This is because the three separate marks were combined into one punch called a ‘press punch’ which was applied to the case using a fly press. The sponsor's mark was always applied first, before the item was sent in to the assay office, so it is not part of this regular pattern.

There is nothing like looking at a few examples to give you an idea of what to look out for when you are trying to read a set of hallmarks. There are lots of examples on my British hallmark examples page.

There are a number of books about British hallmarks, the most widely known is Bradbury's Book of Hallmarks which is published by the Sheffield Assay Office. It is a small paperback book that fits easily in the pocket and is great value for money. In addition to tables of date letters, there is a tremendous amount of information on British hallmarking crammed into it, providing the key to marks on English, Scottish, Irish and imported silver and gold and, beginning with the new 2014 edition, it is currently the only reference book that correctly describes the British hallmarking of imported watches.

The principal problem with Bradbury's and other reference books is that they only illustrate date letters for silver. The shapes of shields around date letters on gold used by the London Assay Office were different from those used on silver. Also bear in mind that, for brevity, only the first year in which a date letter punch was used is noted - you have to remember that date letter punches were used over two calendar years.

The classic reference work for silver dealers and collectors is Jackson's Silver and Gold Marks of England, Scotland and Ireland. The hardback edition is a massive tome that is largely taken up with the marks of early goldsmiths and silversmiths which are unlikely to be much use unless you are collecting early silverware. For most people this is an overkill, but the pocket version is much handier in size, and it is the only book that contains accurate representations of date letters for all standards of gold and silver.

Both books, Bradbury's and Jackson's Pocket Edition, are cheap and I recommend that you buy both. There are numerous editions of Bradbury's available; make sure that you get the new edition from 2014 with the “Chinese red” covers as shown here which was heavily updated, or the latest revised edition which has a dark blue cover of the same design as the 2104 edition. There is only one version of the pocket edition of Jackson's.

The only book that I am aware of that goes into adequate depth about the laws and practices of hallmarking is by J. Paul de Castro, a barrister as well as a silver collector, “The Law and Practice of Hall-Marking Gold and Silver Wares”, London, 1935. If someone is not familiar with this book they have no right to call themselves an expert on hallmarking.