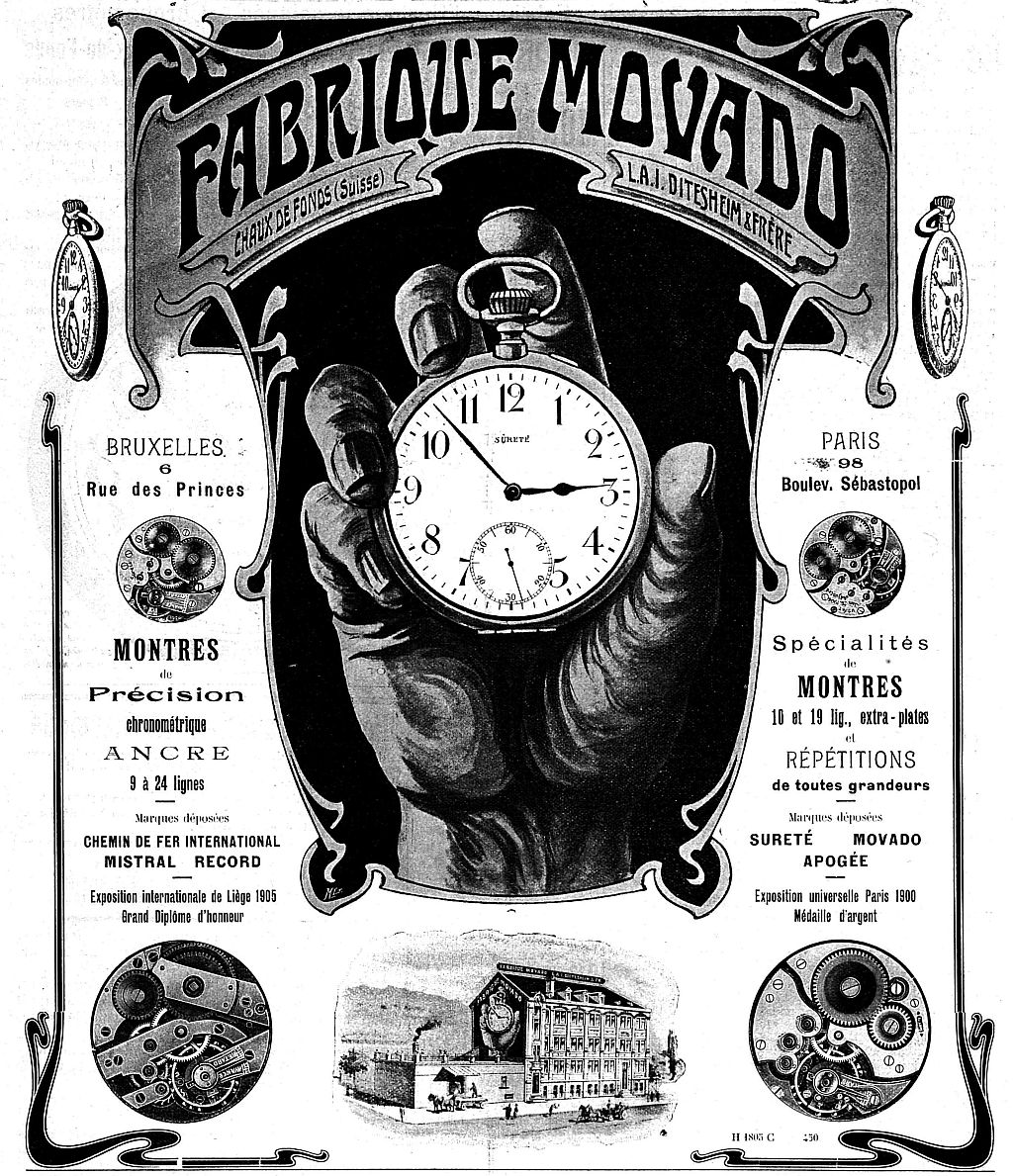 In 1905 the company adopted the name Movado, meaning “always in motion” in the international language of Esperanto

The advert reproduced here from a 1907 Swiss trade journal shows the name L. A. I. Ditesheim & Frère and a hand holding a watch, a trademark that appears in many Movado watch cases.

The advert says that the company makes precision lever watch movements in sizes from 9 lignes to 24 lignes and specialises in 10 and 19 ligne extra thin movements, and repeaters of all sizes.

In 1912 Movado created the “Polyplan” with a curved case that was designed to follow contour of the wrist.

In order to give give the case its curvature whilst still fitting a full size movement, a movement with the working parts distributed across three plates set at angles to each other was designed and patented. 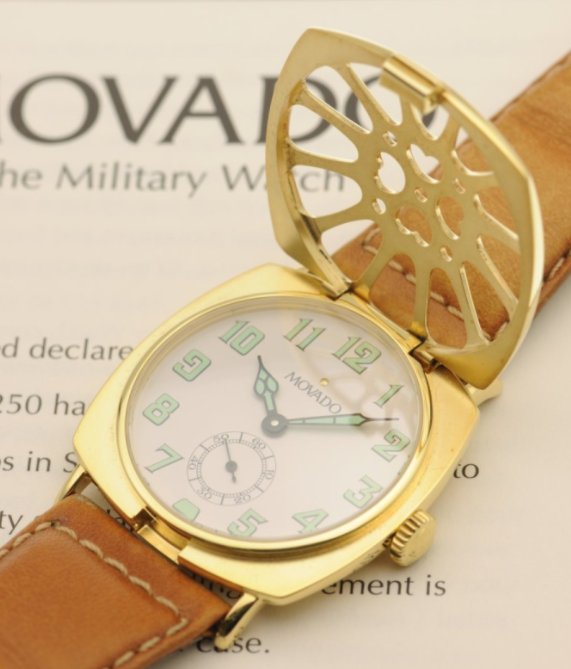 In 1914 Movado created their “Soldier's Watch” with an integral protective grill or shrapnel guard.

The integrated grill is unusual; there were many designs of such grills, intended to protect the crystal in the cramped conditions of the trenches, but they were usually loose and held in place by passing the strap through loops.

The Movado Soldier's Watch is not totally original but is a development of savonnette or hunter cased wristwatches. It is similar to a half-hunter or demi-savonnette, in that the time can be read with the lid closed, but with cut outs extending right across the lid rather then a simple round hole in the centre. These give a better view of the hands and numerals than the restricted view provided by a demi-savonnette lid.

Because the design was similar to existing demi-savonnette watches, it couldn't be patented as invention.

In "The Movado History" Fritz von Osterhausen writes that this was developed before the war, a shrewd anticipation of the forthcoming conflict.

The Soldier's Watch was a very successful product for Movado, and it is believed that they sold some 2,000 each year during the First World War. 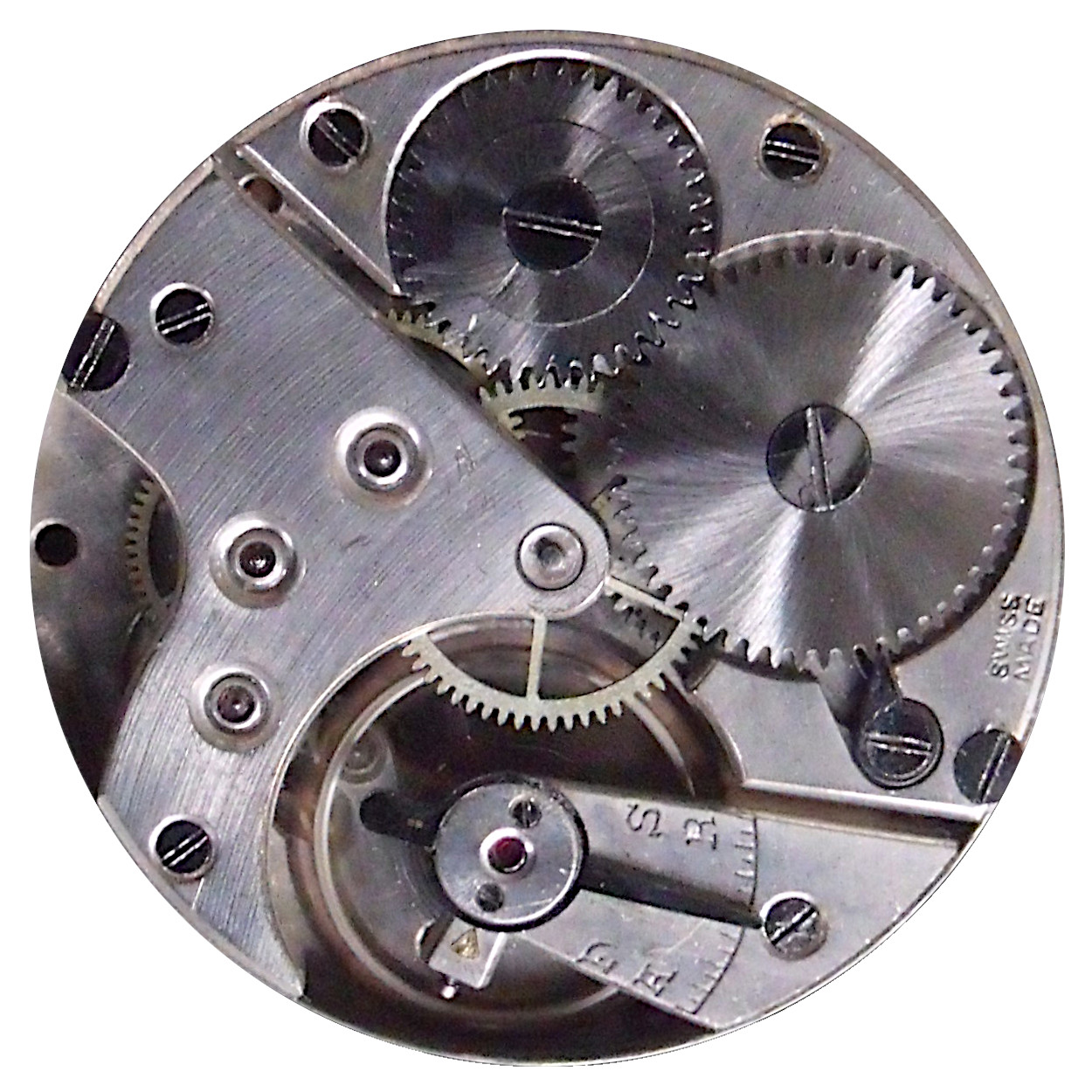 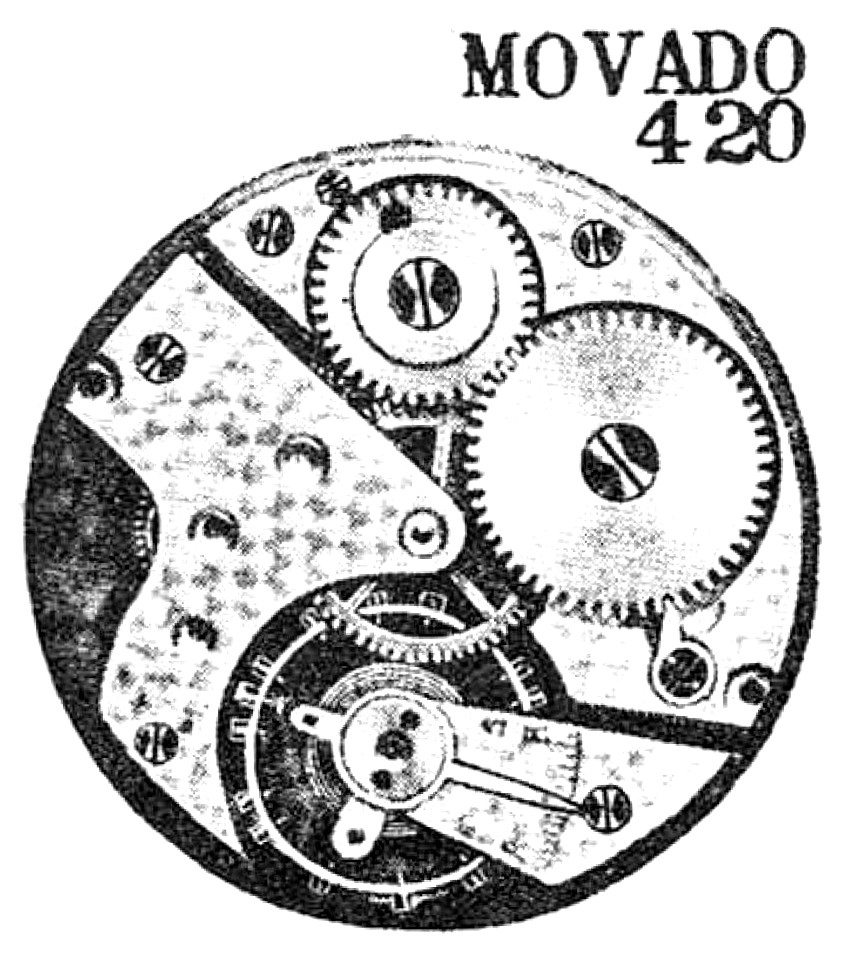 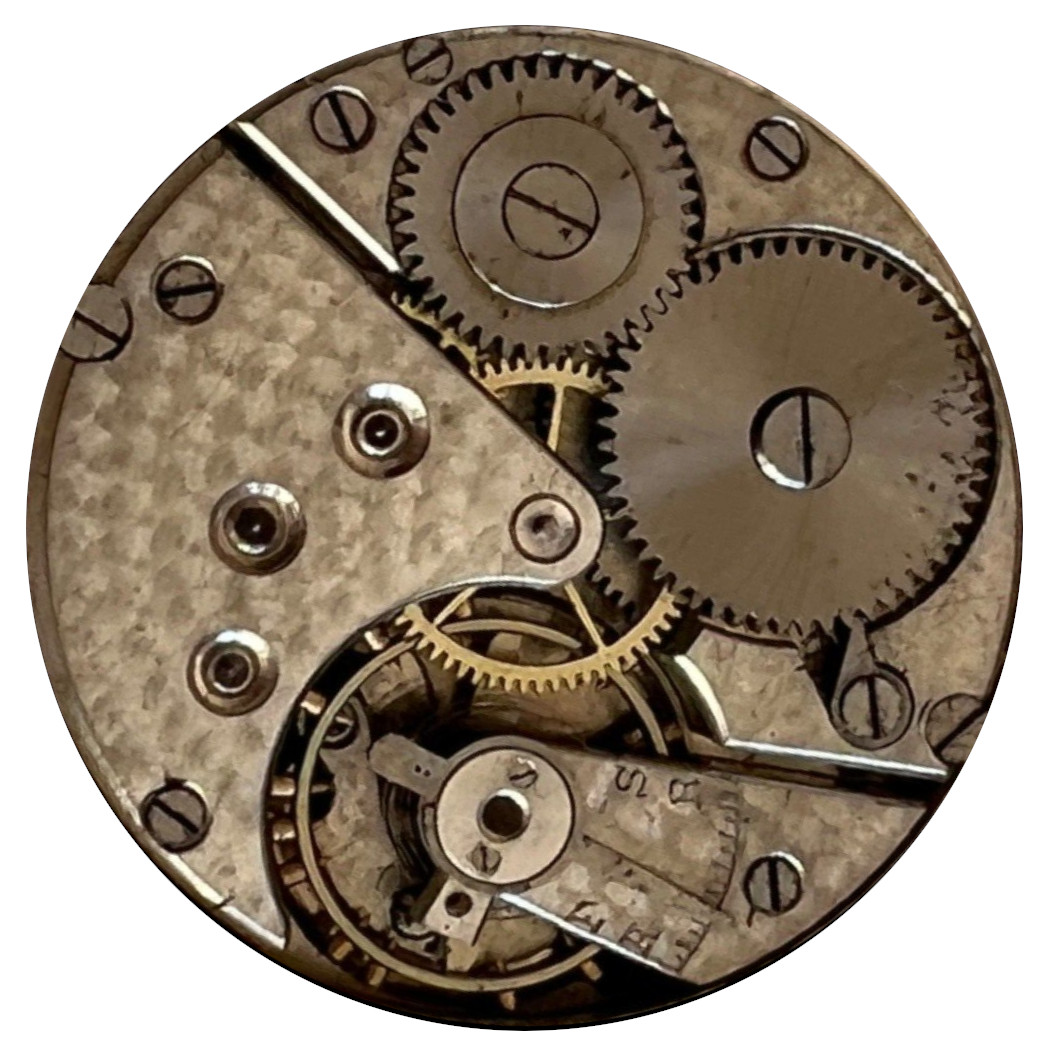 The movements shown in the images here were made by Movado and used in trench watches and later wristwatches.

The most significant difference between the two movements is that the earlier one from the Borgel trench watch has a screw next to the crown wheel that releases the setting lever so that the stem can be withdrawn before removing the movement from the case (although this is not necessary with a Borgel screw case). The later movement does not have a setting lever screw, which shows that it has American style negative set keyless work. This difference is not due to the relative ages or stage of development of the two movements, both types of keyless work were made at the times when both movements were made.

Both versions of the movement in the images have monometallic balances and silver coloured balance springs, as does the movement in the catalogue image. Since these are high quality jewelled lever escapement movements, the presence of a monometallic balance means that the balance spring is made of a temperature compensating nickel steel alloy. The first temperature compensating nickel steel balance springs were made in 1897 by Paul Perret with the collaboration of Dr Guillaume.

In the 1920s Movado designed a watch in a two part case which they called “Ermeto” for hermetic, although the cases were not particularly well sealed.

The outer case has two parts mounted on slides. When the two parts are together, the watch is completely concealed. To view the time, the user slides apart the two parts of the case to reveal the watch, and the action winds the watch though a rack and pinion winding system. Movado were granted a patent for this winding system in 1928. 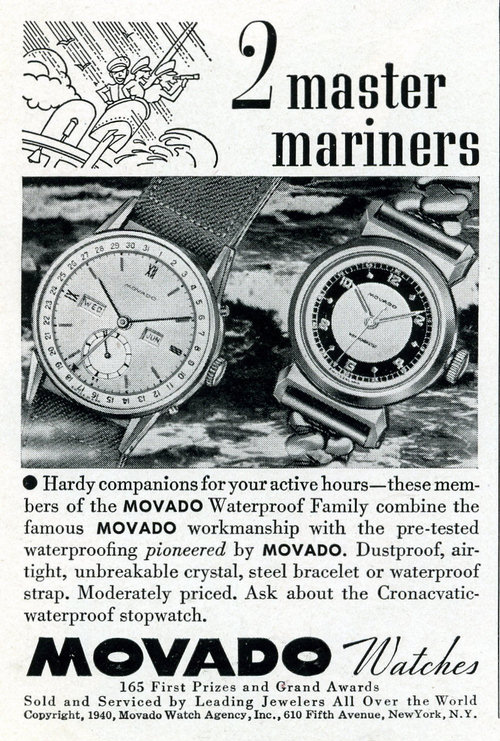 "The year 1935 saw the introduction of the first Movado water-resistant wristwatch, the ‘Acvatic’. This unusual spelling of the word is derived from the Latin word ‘aqua’ (water) and was first registered as a trademark on 13th February 1936.

Produced in various sizes the Acvatic had a screwed back with a lead gasket and a cork seal for the winding crown. It was developed by the case-making firm of François Borgel of Geneva, which was owned by three brothers called Tauber [sic]. They developed many other variously shaped water-resistant cases for Movado during the subsequent decades. Later a two-button chronograph called "Cronacvatic" was developed."

The screwed back case was the patent Decagonal Taubert case, complete with cork seal for the winding stem, another Taubert patent. Von Osterhausen gives the year of introduction of the Acvatic as 1935, a year later than the waterproof models using the Decagonal case back introduced by Mido and West End. So the wording of the 1940 Movado advert shown here is a little misleading, because the wording in the advert says "with the pre-tested waterproofing pioneered by Movado". It also says "Dustproof, airtight, unbreakable crystal ..." - how advertising standards have changed since 1940!

Movado became a big customer of the Taubert's and one sees many Movado watches from the 1930s to the 1960s in the distinctive Decagonal case, but unlike the Mido cases these are proudly stamped with the FB-key Borgel / Taubert trademark.

Sometimes these marks are also accompanied by the mysterious word "Vacuum", as discussed on my page about the Taubert company in the section Taubert, Manufacture Vacuum. 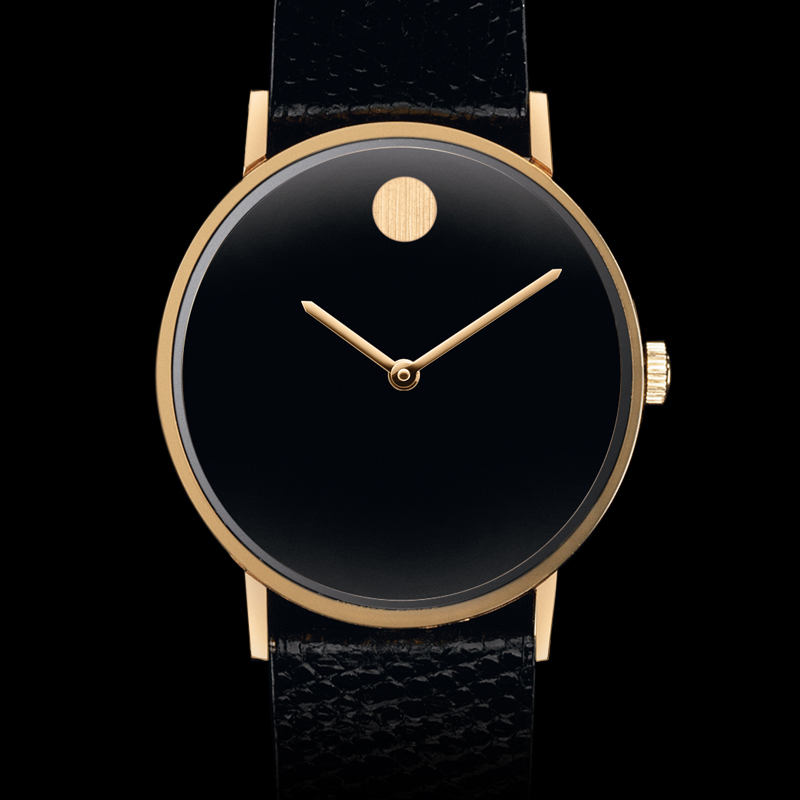 One of Movado's best known watches is the iconic “Museum” watch, designed in 1947 by the American designer Nathan George Horwitt, who was influenced by the German Bauhaus art school. The Museum watch featured a completely plain dial with a single marker dot at 12 o'clock intended to suggest a sundial, the most ancient form of keeping time. One of these watches, made in 1947 by Vacheron & Constantin-Le Coultre, is part of the permanent collection of New York's Museum of Modern Art.

Movado copied the design of the Museum watch in 1948 without permission and Horwitt sued, the case eventually being settled in 1975.

In 1969 Movado joined with Zenith and Mondia to form Mondia-Zenith-Movado.

Like every Swiss watch manufacturer, Movado suffered during the “quartz crisis” of the 1970s and in the 1980s became a dormant company, existing in name only.

In 1983 Movado and Zenith separated and Movado was bought by the American Gerry Grinberg, who escaped the Communist revolution in Cuba. Today the Movado brand is part of a global group Movado Group, Inc. (MGI).