Blog: The Fallacy of the "Maker's Mark"

The section reproduced here is from my page about sponsor's marks.

The Fallacy of the “Maker's Mark”

The requirement for a sponsor's mark to be struck on gold and silver items as part of the hallmarking process was introduced by an Act of King Edward III in the year 1363. At that time the mark was intended to identify the master goldsmith who would "answer", i.e. be punished or fined, if an item was found to be of substandard quality. It was never intended to identify who actually made an item.

In strict terms the mark is a responsibility mark, but it was not given any name in the 1363 Act. A master goldsmith in the fourteenth century working under the strict rules of the goldsmiths' guild, with a small workshop and a couple of journeymen and apprentices, might naturally have been thought of as the "maker" of items made in his workshop and, understandably but unfortunately, the mark became referred to casually as the "maker's mark", and some of the subsequent Acts did not rectify this.

When the power of the guilds to control who could work in precious metal declined, and with developments in trade and commerce, it became necessary to allow people such as retailers and importers to enter a mark at an assay office so that they could send items for hallmarking. This was first officially acknowledged in the 1738 Plate Offences Act, although it is obvious that the practice existed well before 1738. The 1738 Act required that anyone who made, or caused to be made, any gold or silver wares, to enter new marks at the assay offices. This requirement was to ensure that anyone who traded or dealt in silver or gold wares and who was already registered with an assay office for the purposes of hallmarking should enter new marks, in addition to those who made such items. It has therefore been misleading for over 300 years to describe this mark a "maker's mark".

When it comes to watch cases, this is even more true. Watch case making was difficult to mechanise and remained largely a hand craft industry. But it was a mass production hand craft industry, with division of labour and individual specialists contributing to the manufacture of each case. One specialisation was forming the bowl shaped pieces of the dome, outer back, bezel and lid, forming the case band and soldering them together. Making the “joints” (hinges) that allowed the case back, lid and bezel to be opened was another speciality. Making the springs that opened the back and lid was another speciality. The pendants were often made by a completely different pendant maker who specialised in casting gold and silver. Engraving and polishing were further separate specialisations. Although a case was less complicated than a watch movement and there were not as many separate trades involved, there was still considerable division of labour and each case was the product of a team, not of one person.

The Gold and Silver Wares Act, 1844, introduced the term “private mark” as a result of such considerations. Since then the term “sponsor's mark” has been adopted and is the name used for this mark in the 1973 Hallmarking Act.

Helen Clifford puts the position clearly in Silver edited by Philippa Glanville OBE, FSA, formerly chief curator of the metal, silver and jewellery department of the Victoria and Albert Museum and an authority on silver. Clifford writes

... the mark could refer to any of the specialists involved in its production, or the retailer, depending on who was responsible for taking it to the assay office.

Philippa Glanville summarises this by saying The myth of the maker's mark is unravelled, challenging a century of silver studies. To assume that the sponsor's mark tells you who made the item is wrong. In some cases it might; in many cases it doesn't.

The term sponsor has as one of its meanings one who takes responsibility for something. The term sponsor's mark therefore accurately reflects the legal significance of the mark, and for preference should always be used to avoid misleading assumptions. 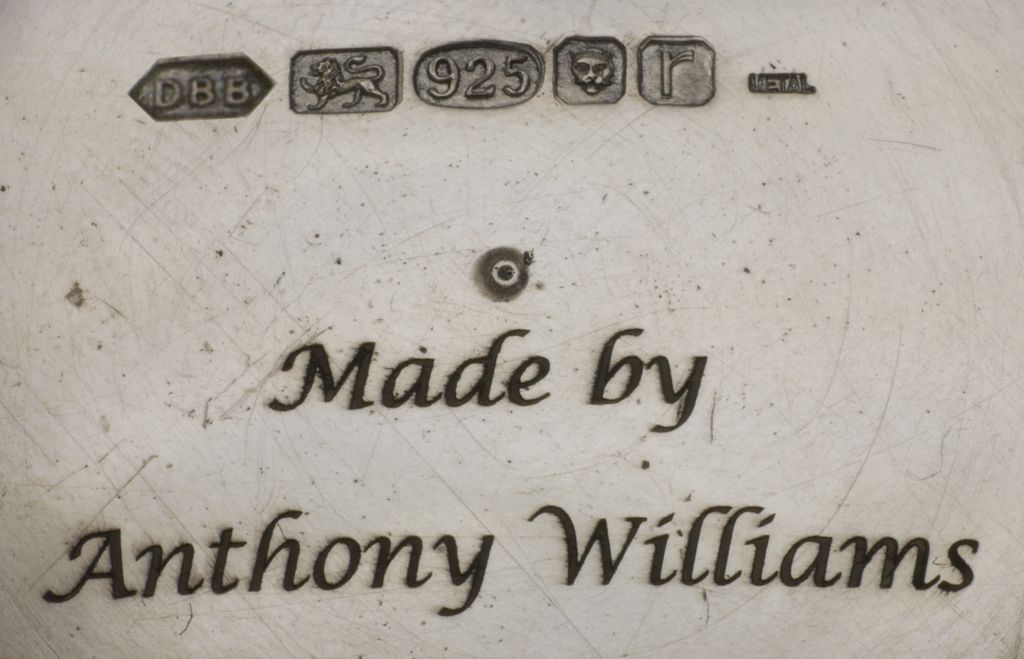 The image here shows a clear example of why this is the case. A neighbour of mine made some silver items when he was at college in the 1970s. He was not registered with an assay office so he was unable to get them hallmarked. He asked if I could get them hallmarked, which I did. In the image you can see my sponsor's mark, DBB set in a rectangular shield with pointed ends, followed by a set of London Assay Office hallmarks with the date letter "r" of 2016. Underneath has been laser engraved the statement "Made by Anthony WIlliams" identifying the real maker.

The assay office stamped my sponsor's mark and laser engraved the maker's name. When I discussed this with them there was no confusion at all, they understood perfectly the difference between the sponsor and the maker. Assay offices do not care at all who made an item; they only need to know, by law, who takes responsibility for it when it is submitted for hallmarking; someone who may have had no part in its manufacture.

In case this is thought to be a recent thing, consider the work of Paul de Lamerie, the most famous English silversmith of the eighteenth century. Philippa Glanville states that it is known that de Lamerie, in common with many other goldsmiths and silversmiths, often subcontracted work to a range of other workshops and had the work marked with his sponsor's mark before submitting for assay and hallmarking. Although de Lamerie had his own workshop in which some items were made, the presence of Paul de Lamerie's mark on an item of gold or silver does not show who made it, which might have been a subcontractor or workmen in de Lamerie's own workshop, and therefore it would clearly be misleading to describe it as a "maker's mark".

Unfortunately the sponsor's mark is still sometimes called the “maker's mark”. This gives rise to ridiculous statements such as Case also signed CN Charles Nicolet a known casemaker for IWC and The movement is Swiss and the case is silver, the watch was assembled and made by George Stockwell for Stockwell and Co Ltd in 1914 with the GS hallmark. These two statements are completely wrong. Charles Nicolet was a director of Stauffer & Co. a large London company that imported watches made by the Swiss parent watch manufacturing company Stauffer, Son & Co. and from IWC and other Swiss manufacturers. Charles Nicolet's mark was entered so that Stauffer & Co. could send Swiss made watch cases to be hallmarked. George Stockwell's mark was entered for Stockwell and Company, a large company of carriers and importers who submitted watches for hallmarking on behalf of their Swiss customers. George Stockwell was a director of the company and never made a watch case or assembled a watch in his life. Saying that Stockwell & Company made a watch case is like today saying that it was made by Fedex! In 1907 Stockwell & Company began to arrange hallmarking for Swiss companies that didn't have British offices, they were one of the first Assay Agents.

Even today and knowing the truth full well, the term “maker's mark” is often casually used by people who should know better, even at the assay offices, although not usually by people in the actual assay and hallmarking section. The acid test would be to ask them to guarantee that the registered person actually made the item, and then they will explain that is not the purpose of the mark.

So Whose Mark Is It?

The sponsor's mark was entered by someone in a position of responsibility and involved in causing an item to be made. In the fourteenth century this was the master goldsmith in whose workshop items were made. But by the eighteenth century Paul de Lamerie, in common with many other goldsmiths and silversmiths, subcontracted work to other workshops and had the items marked with his own sponsor's mark before submitting them for hallmarking. Marks could be entered by people who had no more role in making the item than placing an order for it to be made. If a limited company wanted to send items for hallmarking, a mark was entered under the name of one of the directors. If imported items needed to be hallmarked, a sponsor's mark entered in the name of a director of an importing company or an assay agent would be used.

Bear this in mind when you are looking at the sponsor's mark on a hallmarked gold or silver item. The person whose sponsor's mark appears on it almost certainly did not make it, which is why it is misleading to refer to it as a “maker's mark.” However, the sponsor's mark does point to someone who had role in the item being hallmarked, even if it was only placing an order with the actual manufacturer, and understanding that helps you to understand more about how the item was made.