I make additions and corrections to this web site frequently, but because they are buried somewhere on one of the pages the changes are not very noticeable. I decided to create this blog section to highlight new material. Here below you will find part of one of the pages that I have recently either changed or added to significantly.

This section about mystery trademarks is from my page about Swiss marks that can be found at Swiss Hallmarks Other Case Marks. I have solved two of the mysteries, if you can help with any of the others please get in touch. All contributions will be acknowledged. 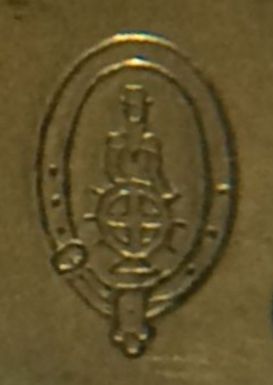 One trademark that I get regularly asked about is the ships helmsman or sailor with a ship's wheel shown in the images here, sometimes also called the ship's skipper or pilot.

The entry from Kochmann's "Trademarks of European Origins" shows that the helmsman image was registered by Coullery Freres of Fontenais, Switzerland, in 1885 for watches and watch cases. The watches carrying this mark are usually standard Swiss bar movements with cylinder escapements. 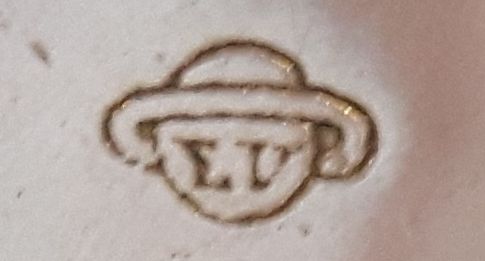 Another trademark that crops up fairly often is a ringed planet that looks like Saturn with the initials EV on the lower part of the planet. This trademark was registered in 1887 by Etienne Varin of Fontenais, Switzerland, a watch case maker. 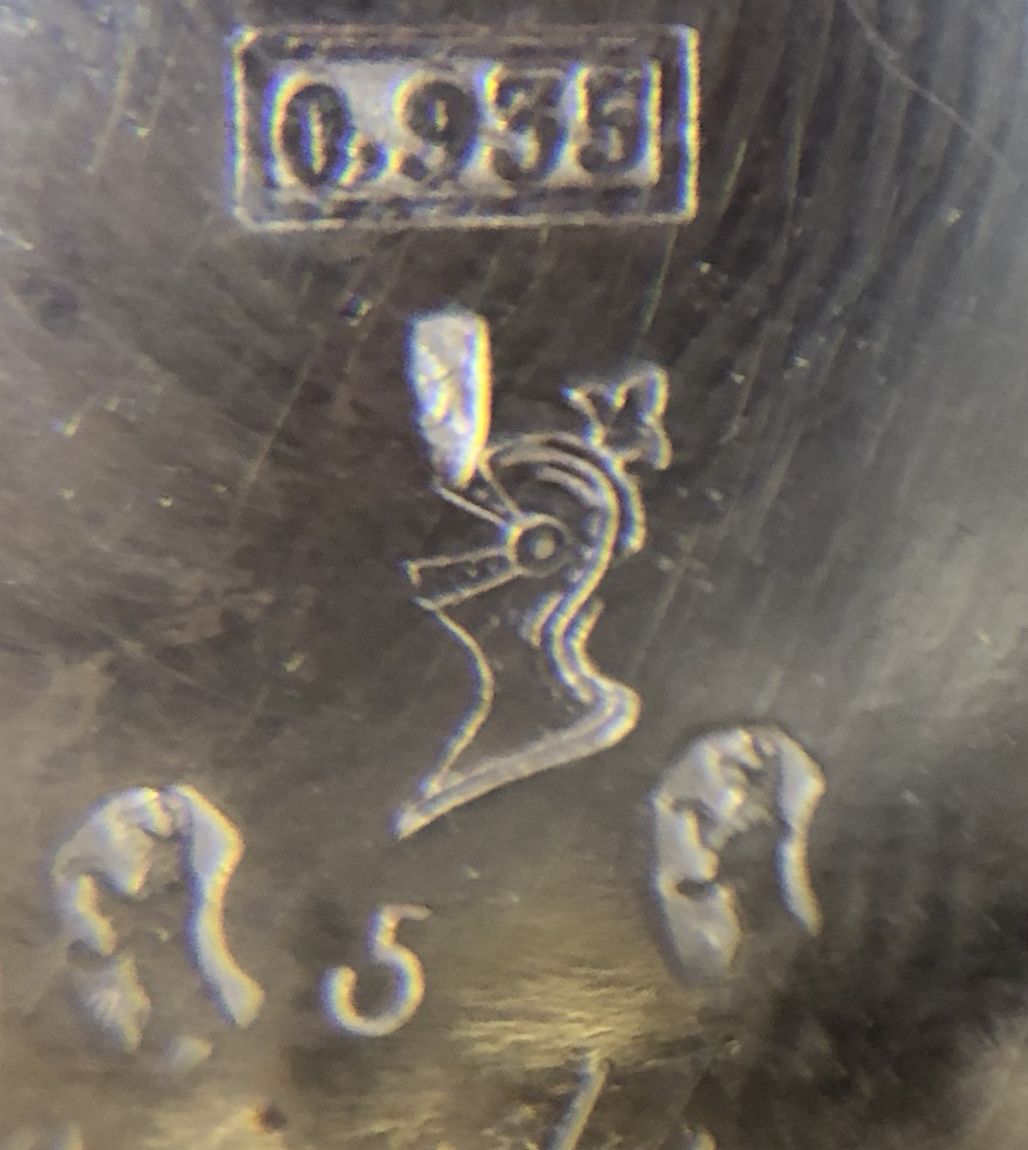 This rather splendid knight's helmet, with open visor and apparently empty, crops up in Swiss watch cases. Unfortunately I have so far been unable to identify who the trademark belonged to.

The three bears (a small one above and just touching the visor, and two larger below the helmet) and 0·935 fineness stamp show that this case was definitely hallmarked after 1 January 1888, and most likely before 1 June 1907. 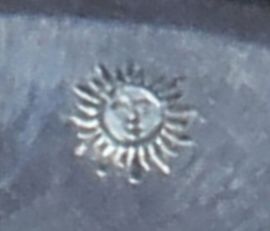 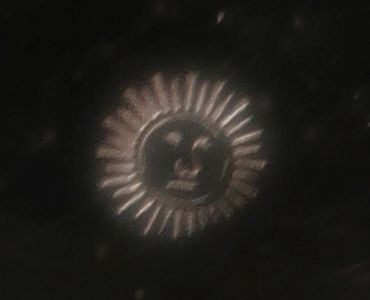 The two radiant sun marks here both come from the same pocket watch. The watch is Swiss, with an 18 carat gold case carrying the Swiss hallmark for 18 carat gold, the head of Helvetia. This shows that it was hallmarked after the Swiss Precious Metals Control Act of 23 December 1880 introduced a uniform system of hallmarking for watch cases to be used throughout Switzerland.

As might be expected for a watch with such a valuable case, it has well finished and fully jewelled (15 jewel) Swiss lever movement. Unfortunately I have been unable to identify the owner of the radiant sun trademark. The sun was used by a lot of different people, I found 222 entries involving sun symbology, but none was exactly the same.

The mark is similar to the Phoebus Town Mark introduced in 1887 for the London Assay Office to use on imported watch cases, but it is not part of a hallmark and is not the same, so this is just a curious coincidence. 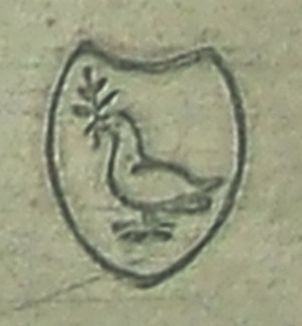 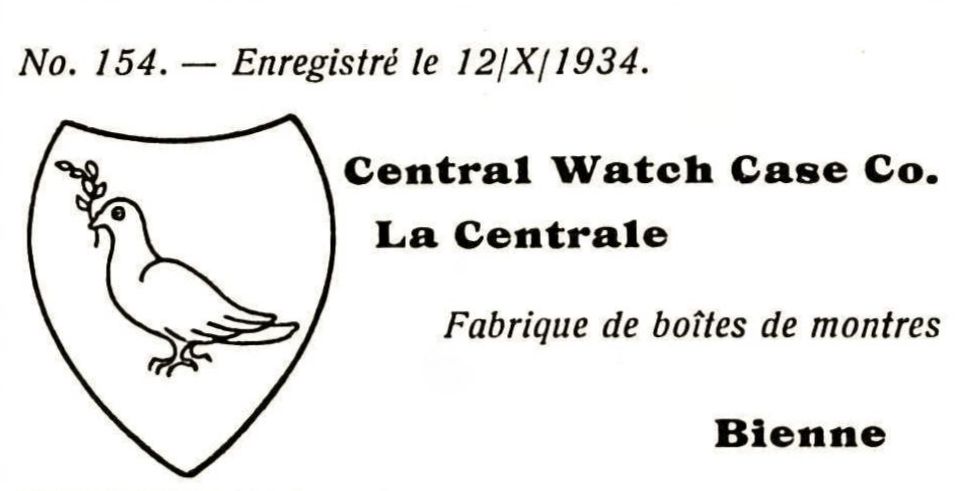 This trademark of a dove with olive branch was fist registered by the watch case company “Fabrique de Boites La Centrale” of Bienne on 24 April 1922.

The registration drawing with No. 154 shows that this existing mark was entered into the central register in 1934 when the Swiss systems of Poinçons de Maître was centralised in 1934.

La Centrale was founded by the Brandt brothers in a factory building that they had initially rented and then purchased from Schneider & Perret-Gentil in 1880 as their first factory in Bienne. La Centrale was set up in this factory in 1896 to make watch cases for Omega. 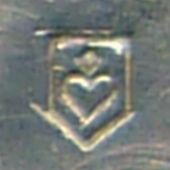 The shield containing a heart and diamond is a trademark of Courvoisier Frères of La Chaux-de-Fonds.

This company could trace its roots back to 1842, founded by Henri-Louis Courvoisier and his brother Philippe Auguste Courvoisier out of the father's firm Courvoisier & Cie, but after a split between the two brothers the company was reconstituted in 1852, which it subsequently used as its founding date.

In 1880 the company registered its name and trademark as Courvoisier Frères. 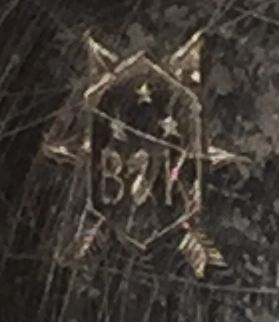 The B&Q trademark with stars and arrows was registered by Bourquin & Kenel of La Chaux-de-Fonds in 1890 for watch movements and cases. The company was founded in 1849 and, according to Kathleen H. Pritchard “Swiss Timepiece Makers, 1775-1975” said that it specialised in exports to Germany, Scandinavia and Russia, and made "levers and cylinders", 10 to 24 lignes, in gold and silver cases. The company registered its name in 1894, 1897 and 1898 for making cases, cuvettes, dials, movements and watch boxes, in 1906 for making watches, watch parts and boxes, and in 1910 for small watches. The company might have made these things, but it seems more likely that they bought in movements from one of the ébauche manufacturers, and possibly also bought in cases, dials, etc. and assembled watches. The company became D Kenel-Bourquin in 1922.

The Bourquin name appears quite a lot in Swiss watchmaking; Pritchard list over 40 occurrences of the name over 6 pages, although many of these are single line entries and appear to be trading entities rather than manufactures. However, one has more details; Ferdinand Bourquin, founded in 1841, subsequently owned by several generations of the same family including Julien Bourquin, clearly was #a watch movement manufacturer. In 1892 this company was granted Swiss patent 4900 for a counter mechanism for chronographs, which was sold in 1895 to Alfred Lugrin.