I have done a lot of research into the hallmarking of imported watches, but one thing that had eluded me until recently was how the Swiss dealt with nine carat gold. There was a big market for nine carat gold items in the UK after it was made a legal standard in 1854, but it was not a legal standard in Switzerland until 1933, so what did the Swiss watch manufacturers do - miss out on a big chunk of the market in the UK? Not likely! Read on below for the full story . . .

This is from my page about Swiss hallmarking that can be found at Swiss Hallmarks.

Nine, 12 and 15 carat gold were made legal standards in Britain 1854. These lower standards of gold quickly became very popular because items made from them could legally be called “gold” but they were cheaper than the only previous legal standards of 22 and 18 carats, 9 carat gold in particular was much cheaper.

Note that it is only legal to call items gold that are made from one of the legal standards. It is illegal to refer to gold plated, rolled gold or gold filled items as simply gold although it is frequently done by amateur sellers who don't know that the full description must be used,; caveat emptor.

Before 1880, a small proportion of 18 carat gold Swiss watch cases were sent to England to be marked with British hallmarks before 1888. On the continent, 14 carat was a popular standard for gold, but 14 carat gold cases couldn't be hallmarked in Britain because it was not a legal British standard of fineness. The Swiss Precious Metals Control Act of 1880 specified two legal standards of fineness for gold, 18 and 14 carat. Swiss watches with 18 or 14 carat gold cases imported into Britain after 1880 carry Swiss hallmarks.

The lack of official Swiss legal recognition for nine and twelve carat gold meant that nine carat gold cases could not be assayed or hallmarked in a Swiss Bureau de Contrôle. This did not stop Swiss watch manufacturers from wanting a share of the large and growing market for watches with cheaper gold cases in Britain, and there was nothing to stop them making cases from one of these standards of gold, but the lack of an official Swiss hallmark was a problem.

Until 1888, nine and twelve carat gold Swiss watch cases could be hallmarked in a British assay office with traditional British hallmarks. This was entirely voluntary and most Swiss watch manufacturers didn't bother. But some did. English watch manufacturers objected to this, so from 1888 onwards new British hallmarks for imported watches with the word "Foreign" across the middle were specified. This effectively put a stop to the practice of getting any gold or silver Swiss watch cases assayed and hallmarked in Britain until 1907. This is discussed further on my page British hallmarking.

This left a problem for Swiss watch manufacturers. The British Merchandise Marks Act which introduced the new hallmarks for foreign watch cases, also banned the import of gold and silver watch cases that were not hallmarked. Watch cases of 18 and 14 carat gold could be hallmarked in Switzerland, and these Swiss hallmarks were allowed by the British Customs authorities. But 9 and 12 carat gold cases could not be hallmarked in Switzerland, so from 1888 Swiss watch case manufacturers simply applied their own official looking marks to 9 and 12 carat gold watch cases.

The picture here shows a crown stamp on the inside case back of a Swiss ladies' cocktail watch. The case has stamped on the underside of both the fixed lugs a "9" on its side followed by "375", so it is clearly 9 carat gold. The crown mark in the image is stamped twice inside the case back. These are not official British or Swiss hallmarks, they are marks that the case maker put onto the case that look sufficiently official that British customs and customers in Britain would be convinced that the case was in fact 9 carat gold.

In December 1914 a Swiss Federal Decree brought several aspects of Swiss hallmarking of gold and silver watch cases destined for Britain into line with British practice.

This change came about because of an agreement between the Swiss Legation in London and the Goldsmiths' Company that, for the duration of the war, the punching of hallmarks on watch cases would be done in such a way that the damage caused could be repaired in England, rather than having to send the cases back to Switzerland. It was agreed that instead of drawing samples from the cases for assay, which caused considerable damage, British assay offices would accept the validity of Swiss hallmarks and simply counter stamp the cases with British import hallmarks.

To facilitate the agreement, Swiss exporting watch case manufacturers were required to present their watch cases in an unfinished state to a Swiss Bureau de Contrôle to be marked with official Swiss hallmarks. The documentation accompanying the cases had to declare that they were to be exported to Britain. The cases would be drawn to take samples to be assayed, the marks of which were subsequently removed when the case was finished. The finished cases were then sent to Britain where they were stamped with British import hallmarks, which caused little damage compared with drawing and could be rectified by polishing.

It was also necessary that the Swiss bureaux de contrôle be empowered to test and mark cases made of nine and 12 carat gold, which were below Swiss legal fineness. The decree allowed gold watch cases (bôtes d'or) of 9 and 12 carat fineness to be tested in Swiss bureaux de contrôle and hallmarked with an official counter stamp of the Swiss Federal Cross

, the « croix fédérale » mentioned in the extract shown here. The Decree says that the fineness of 9 or 12 carat are to be marked by the manufacturer, but it did not specify the form of these marks.

The excerpt from the decree reproduced here stipulates that the hallmark would be stamped on the middle part of the case, in the case back and bezel, as well as on the bow of a pocket watch and one of the “anses” of wristwatches. At the time, the Swiss term for the fixed wire lugs of early wristwatches was anses (handles).

It was recommended that for silver watch cases, Swiss watch case manufacturers use the fineness mark 0,925 rather than 0,935, corresponding to the British fineness of Sterling 0·925, and that a single bear hallmark be used instead of the three bears used until that date.

The cases of watches exported to Britain during the war under this agreement would bear two sets of hallmarks, Swiss and British. However, these are not seen very often, suggesting that Swiss manufacturers didn't take advantage of the agreement. Although it might have made life easier for watch case manufacturers, it was most likely the watch manufacturers who objected. To have any significant effect, the agreement would have meant either that watches were exported complete, with their movements being removed in Britain so that the cases could be hallmarked, or that cases and movements were exported separately and brought together in Britain after the cases were hallmarked. However, watch manufacturers liked to put watches on final test for a number of days after they were cased before they were released, so would not have liked the idea of the movements being fitted or refitted in Britain.

In 1924 the Swiss Federal Council received to a request by the Association of Swiss Gold Watch Case Manufacturers to permit gold watch cases of below 14 carat to be assayed and hallmarked if they were to be exported to countries where such standards were legal. This was effectively a request to generalise, and extend to other countries, the provisions of the 1914 decree, which only applied to 9 and 12 carat gold watch cases destined for Britain.

It was noted in the request that in several countries in addition to Great Britain where gold fineness levels below 14 carats were legal and could be hallmarked. It was remarked that “Watches with cases in these gold fineness find considerable sales in England.”

In response to this request, on 31 March 1924, the Federal Council decreed that from 1 May 1924, any gold watch case of below the legal fineness of 14 carats, but not less than 8 carats, could be assayed and hallmarked with the “Eidgenössisches Kreuz” or Swiss Federal Cross

in an official Swiss Bureau de Contrôle (assay office) as a guarantee of the stated fineness at the request of the producer.

This Decree didn't alter the legal standards of fineness for gold in Switzerland, but it meant that the Swiss Bureaux de Contrôle could test and hallmark items of below 14 carat fineness, but not less than 8 carats, providing that they were to be exported. 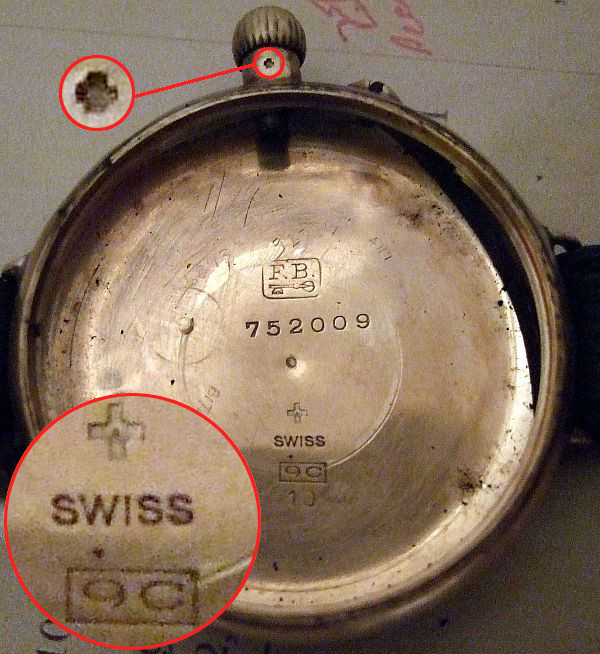 The photograph here shows a nine carat gold Borgel watch case with an example of these Swiss hallmarks.

One interesting feature of this case is the little dot right in the centre of the case that looks like a punch mark. This has been made by the watch movement centre pivot. The cost of gold compared to other metals was, and still is, very high, the average gold/silver price ratio during the 20th century was 47:1 meaning that gold was nearly 50 times as expensive as silver. Because of this, gold cases were made as thin as possible, thinner than silver cases, to keep the cost down. This watch case has been made so thin that the back of the case can flex inwards and press onto the end of the centre pivot, which has left the mark in the case. Needless to say, this is not ideal for good timekeeping!

Bill Whiteley kindly measured the thickness of his 9 carat gold Borgel case for me, the back of the case is 0.28mm thick. This corresponds very well with the definition of Poinçon de Maître No. 5, the Key of Geneva, which was used on gold and platinum watch cases of minimum thickness 0.3mm made in Geneva. I am sure that a bit of polishing over the years could have reduced it by .02mm. For comparison I measured a couple of sterling silver Borgel cases of similar age and they were 0.58 and 0.56mm thick; this thickness makes a much more substantial case, but in gold would push up the cost considerably.

This is one of the points that English watchmakers and watchcase makers raised with the Select Committee on hallmarking in 1878, that English watchcases had to be made thick enough to withstand the British hallmark punches, whereas Swiss watch cases that were not required to be hallmarked could be made thinner, and therefore cheaper. I haven't yet measured a 9 carat gold Swiss case with British import hallmarks to see if that was made thicker to withstand British hallmarking, but I suspect that they weren't and that the assay offices were simply more careful in their application of the punches.

The Swiss authorities officially recognised nine carat gold as a legal standard in Switzerland in the Precious Metals Control Act of 1933, but only for watch cases. The hallmark for nine carat gold was a "morgenstern", which literally means morning start but is a medieval weapon like a mace consisting of a baton with a spiked metal ball on the end.