The section reproduced here is from my page about the Coventry, England, watchmaking company Rotherham & Sons.

Rotherham & Sons were one of the few English watchmaking companies to make wristwatches. They could not compete on scale or price with American or Swiss manufacturers, so these wristwatches were expensive at the time and are not seen very often. Rotherhams also imported Swiss watches so not every watch with a Rotherham mark on it was made in England. However, the watch shown on this page was produced entirely in Rotherhams' Coventry factory. 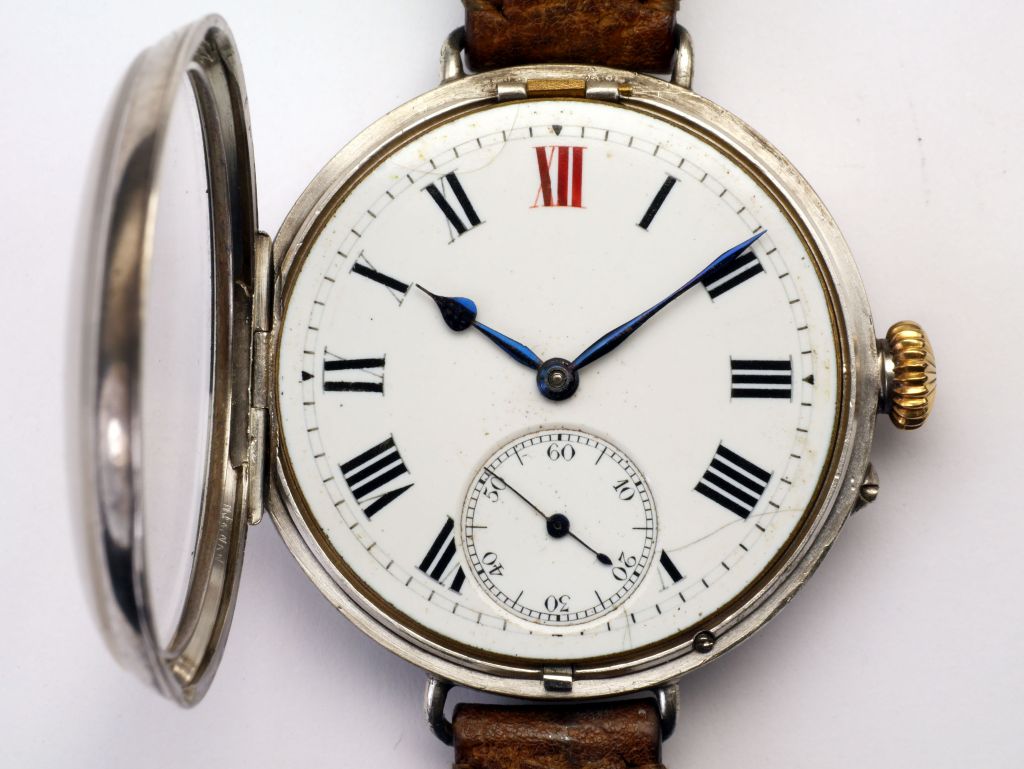 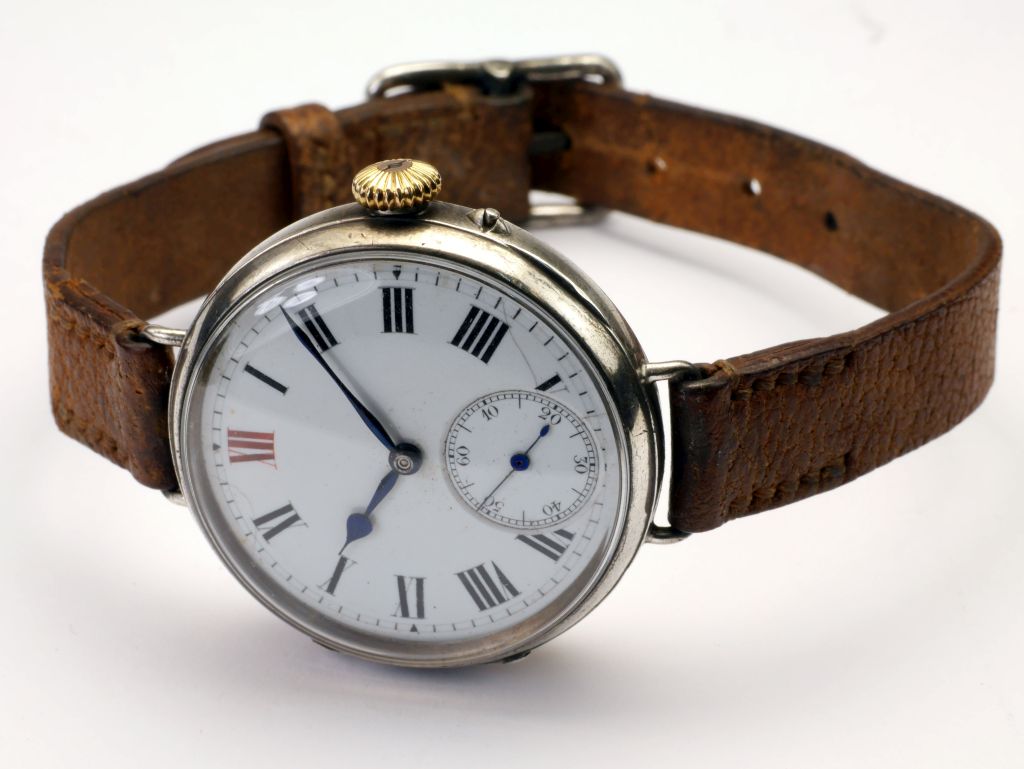 The watch is stem wound and set, with a push pin in an olivette on the side of the case to put the keyless mechanism into hand setting mode. The case is 34.6mm diameter excluding the lugs and crown, a comfortable size for a man's wristwatch.

The view of the dial with the bezel open shows the traditional English method of fixing the movement to the case. At the top, above the twelve o'clock, there is a “joint”, the casemaker's term for a hinge, with the two outer silver knuckles fixed to the case band and a central brass knuckle fixed to the movement. At the bottom, below the six o'clock position, there is a spring catch that can be released to allow the movement to be swung out from the case, as shown in the picture of the watch opened further down the page. By the second half of the nineteenth century this looked increasingly old fashioned, but it didn't inconvenience the wearer.

The serial number on the movement is 253,272. I have added this to the graph in the Coventry Factory Production section as a red bar spanning 1914 and 1915 indicating the actual period when the case was hallmarked, remembering that hallmark date letters span two calendar years. The red bar falls well below the average line of dates drawn from case hallmarks, showing that the movement had been in stock for some time, perhaps as long as eight to ten years, before it was cased up as a wristwatch. This is not surprising given the changes in fashion that were taking place at the time.

Movements mass produced by automatic machines were made in large batches, because a lot of time was involved in setting up the machinery but the cost of the raw materials was low, so once set up the machines were left to churn out large numbers of identical components. These were assembled into movements, which were not cased but kept in stock until they were needed. The fashion for ladies to wear wristwatches began in the 1880s and it soon displaced the wearing or carrying of fob watches, so the demand for fob watch movements like the one in this watch fell, and many movements were left unsold. The movement of this watch might have never been sold had not the Great War created a huge demand for men's wristwatches, which caused many fob watch movements that had lain on the shelf for years to be dusted off and cased up for duty at the front on an officer's wrist.

The date letter shows that the case was hallmarked between June 1914 and May 1915, after which it would have been returned to the factory to be finished and to have the movement fitted. This timing shows that the wristwatch was undoubtedly made in response to the demands of newly commissioned British officers during the first year of the Great War. British Army officers were expected to purchase their own wristwatches as part of their kit, for which they were given an allowance. The dial is not luminised, a feature that quickly became a requirement during the war for officer's trench watches.

The three quarter plate movement measures 29.25mm across the dial plate which makes it an "0" size on the Lancashire Watch gauge, or 13 lignes on the Swiss system. The mainspring is housed in a "going barrel" and drives the train directly, teeth on the outside of the barrel drive the pinion of the centre wheel. English manufacturers had gradually given up their love affair with the fusee, which made watches expensive to make, bulky and almost impossible to make keyless wound.

The movement shows Rotherhams' typical high level of finish, with gilded plates and cocks, polished and blued screws and bright polished steel parts. The ruby jewels are set in chatons and, in addition to the balance wheel, the escape wheel and lever pivots have cap jewels or end stones. The jewel count is not stated but is most likely 19, the 15 jewels usually found in a lever escapement movement jewelled to the third wheel, plus the extra end stones for both the lever and escape wheel.

The escapement is an English right angle lever with pointed tooth escape wheel. The English right angle lever brings the escape wheel closer to the balance staff than does a Swiss straight line lever, which is why the escape wheel is set down below the rim of the balance. The balance has a cut bimetallic rim for temperature compensation, and gold screws for timing and poising. The balance spring has a Breguet overcoil. The regulator lever has a bevelled slot at the end so that its position against the graduated scale can be read off without parallax error.

The top plate of the movement is engraved with the name of the retailer, The Goldsmiths and Silversmiths Company, 112 Regent St. London. At the time this watch was made, British retailers did not generally allow manufacturers to put their names onto watches. If there was any name on the dial at all, it was usually that of the retailer. This was frequently applied in enamel paint, which does not stick too well to vitreous enamel dials and has usually partially or completely fallen off. 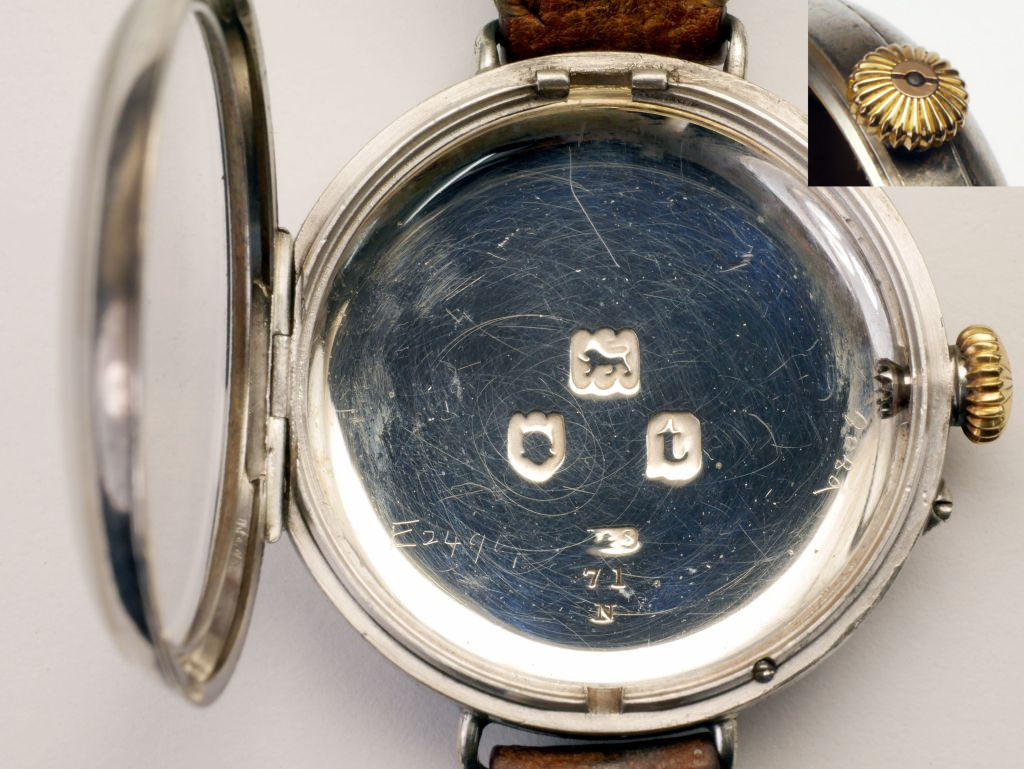 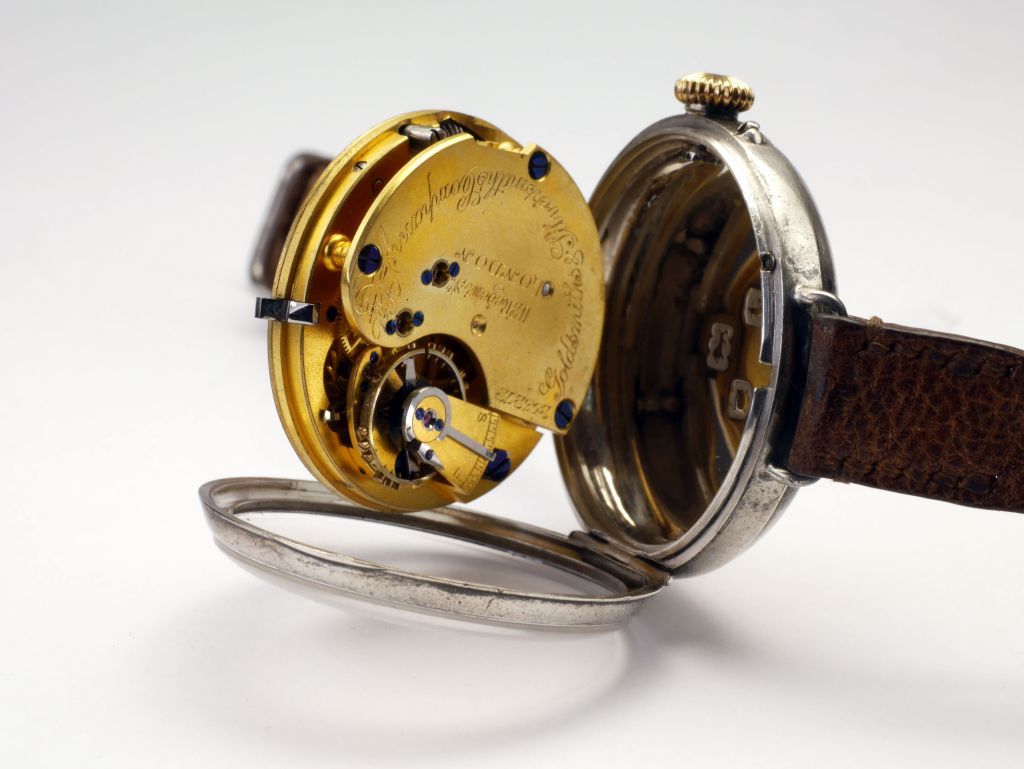 The watch case was made along traditional lines for an English lever watch although, because the watch is stem wound and set, there is no need for an opening outer back as was made for key wound watches. The single case back, or case bottom, is rigidly fixed to the band, the middle part of the case, and does not open.

The view of the case with the bezel open shows, at the top, the two knuckles attached to the middle part of the case or band which a pin passes through to hold the movement to the case, forming a “joint”, the casemaker's term for a hinge. At the bottom, below the six o'clock position, there is a spring catch called a “bolt” that can be released to allow the movement to be swung out from the case. This method of holding the movement into the case is called “bolt and joint” The other image shows the movement swung out of the case on the joint.

The case has hallmarks struck by the London Assay Office, shown by the mark of the leopard's head, for a sterling silver item made in Britain, shown by the walking lion passant. The Merchandise Marks Act of 1887 introduced different standard marks for imported watches, which meant that the lion passant standard mark was only struck on items made in Britain. The date letter is the “t” of 1914 to 1915, remember that date letter punches were changed in the middle of the year when new wardens were elected. The sponsor's mark R&S was entered at the London Assay Office for Rotherham & Sons.

The image of the case also shows Rotherhams' peculiar design of stem winding. The crown and a short case stem with a bevel gear on its inner end are fixed to the case. The crown is secured to the case stem by a recessed hollow round nut with a slot that is shown in the inserted detail in the top right of the image and in hidden detail in the sketch.

When the movement is locked into the case, the bevel gear on the case stem engages with a bevel gear in the movement. The toothed edge of this gear is visible between the plates in the pictures of the movement, near to the “...smiths” part of the engraved retailer's name “Goldsmiths”.

The sketch shows how the two bevel gears mesh together at right angles when the case is closed. These gears have teeth cut on their edges at 45 degrees so that the action of turning the crown and case stem is turned through 90° to wind the mainspring.

I have to say that this is not a great design. Holding the gears in mesh as they are turned presses the case stem against the case, which is a plain bearing. This is not well lubricated and is also a prime place for the entry of dust, so is liable to wear. Wear in the case at this point will eventually allow the gears to fall out of mesh and the watch could not be wound. If you have one of these watches, make sure you get the stem bearing in the case cleaned and lubricated regularly with high pressure grease. The bevel gears themselves must not be oiled or greased.

Turning the crown normally winds the mainspring, the hands are “pin set”, meaning that hand setting is engaged by a push pin in a small olivette on the outside of the case just below the crown. The pin is pressed inwards to shift the keyless work into hand setting mode. 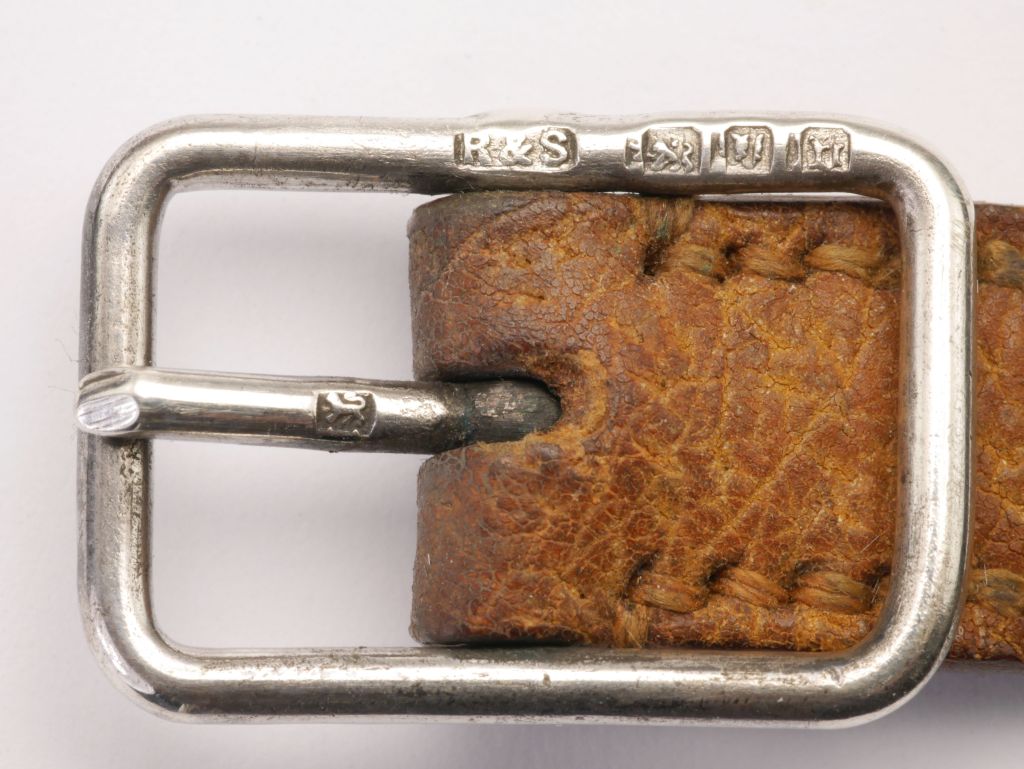 I am sure that the wrist strap is original to the watch, which is why I haven't changed it for one of my designs. It is a two piece strap that is stitched where it is attached to the fixed wire lugs. It appears to be made of pig skin.

The sterling silver buckle has Rotherham and Sons' R&S sponsor's mark. The hallmarks stamped by the London Assay Office are difficult to read because they have been double stamped; an initial shallow stamp was overstamped by a second deeper set of marks. This occurred because the operator realised that the first set of marks was too shallow and had another go, but the punch moved slightly between the two blows. The remains of the first set of marks are arranged and spaced exactly the same as the second set of marks, showing that they were made by a single combined “press punch” which made all three parts of the hallmark, the lion, the leopard's head and the date letter, in one go. I have examined the marks carefully and I am sure that the date letter is the "n" for 1908 to 1909.

Press punches were also used for stamping the hallmarks in the backs of watch cases, which placed them in a regular pattern triangular as can be seen in the case back of this watch. Combined punches were pressed into the case by a manually operated fly press, a press with a flywheel that the operator spins, which turns a screw thread carrying the punch. When the punch meets the work piece, the momentum of the flywheel drives the punch into its surface.