A German imperial law passed in 1886 defined the minimum fineness of gold as 585‰, which later that year caused a change to be made in the Swiss hallmarking of watch cases destined to be exported to Germany. At first this applied only to 14 carat gold cases and involved a doubling of the number of squirrels to two, but in 1887 it was expanded to include all standard finenesses of gold and silver.

The section reproduced below is from my page about Swiss Hallmarks.

Before 1871, German states were independent and Sovereign and framed their own laws. Each state, city state or city had their own stamps, or “Feingehaltstempel”, for gold and silver. After the unification of the 39 sovereign German states into the German Empire in 1871, universal laws affecting all states began to be introduced. In 1884 the "Gesetz über den Feingehalt der Gold und Silberwaren" or "Act on the Fine Content of Gold and Silver Goods" was passed.

The Act specified minimum standards of 585‰ (585 mil) for gold and 800‰ (800 mil or 80% fine) for silver. The imperial crown, the Reichskrone, within a circle representing the sun ( Reichskrone und Sonne) was to be stamped on gold, and a crescent or half moon with the imperial crown (Halbmond und Reichskrone) was stamped on silver. The fineness of the metal was to be expressed numerically, with section 2 of the Act explicitly stating that "The fineness may only be given as 585 or more parts per thousand on gold, and only as 800 parts per thousand or more on silver." A trademark identifying the company or business which stamped the mark and guaranteed the fineness also must be stamped. A tolerance of 5 thousandths for gold and 8 thousandths for silver below the stated fineness was allowed for the whole item, including solder.

There were no other specified tiers of fineness such as 18 carat for gold or sterling for silver; so long as an item was of at least the minimum standard fineness of 585‰ for gold and 800‰ for silver, it was legal. A manufacturer was at liberty to stamp 0.750 for 18 carat gold along with the Sun and Imperial Crown; the guarantee of fineness lay with the manufacturer, not the German federal government.

Who Stamped the Marks?

Because the German law required that manufacturers stamp their own products with the specified gold and silver marks, this meant that Swiss watch case manufacturers stamped the marks of the German sun or moon with the imperial crown on gold and silver on watch cases that might be exported to Germany. However, the presence of one of these German marks in a Swiss watch case does not prove that the item has ever actually been in Germany. It is possible that the item, although at one time intended to be exported to Germany, could have been directed to a different market and never actually passed into or through Germany at all. 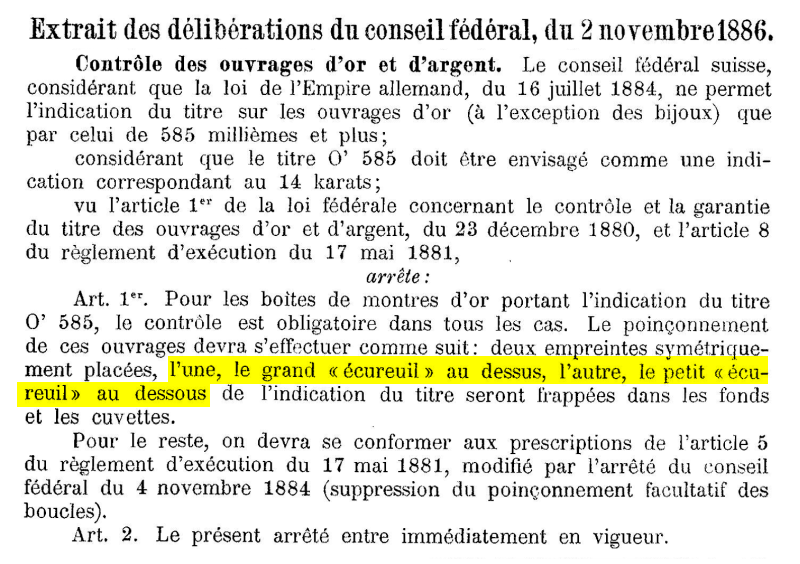 The German imperial law of 16 July 1884 specified the minimum legal fineness of gold as 585 thousandths (585‰) or greater, which caused a change in Swiss hallmarking of watch cases destined to be exported to Germany. At first this applied only to 14 carat gold cases, but it was later expanded to include all standards of gold and silver.

On 2 November 1886, the Swiss federal council met to consider that German law allowed only fineness marks on works of gold (with the exception of jewellery) of 585 thousandths or greater. This corresponded broadly to 14 carat, which in decimal numbers is 14/24 = 0.5833333... or 583‰. The Swiss federal law specified a fineness mark for 14 carat gold of 0.583 with the hallmark of a squirrel (écureuil). This left Swiss 14 carat gold cases stamped with the 0.583 fineness mark, which was clearly lower than the German 0.585 minimum standard, liable to confiscation by the German customs authorities.

In order to comply with the German law, the Swiss federal council issued the decree (arrête) summarised in the image here. With immediate effect, gold watch cases that were destined for Germany and marked by the manufacturer with a fineness mark of 0.585, and passed assay at a bureau de contrôle at this fineness, would be hallmarked with two squirrels symmetrically placed about the fineness mark, a large squirrel above (au dessus) and a small squirrel below (au dessous).

Note that the decree says that the item must assay at 0.585 (l'indication du titre 0'585). This meant that the tolerance of three parts per thousand normally allowed on Swiss assay of gold items was not applicable to items that received the 0.585 hallmark. So an items that was hallmarked 0.583, the Swiss decimal fineness for 14 carat gold, could assay at only 0.580, whereas an item hallmarked 0.585 had to assay at 0.585 or better.

This resolved the immediate problem, but no doubt German customers were left wondering why Swiss 18 carat (0.750) gold cases, and silver cases of 0.800 and 0.875 fineness, were hallmarked with only a single Helvetia, capercaillie or bear, when 14 carat gold cases carried two squirrels.

To overcome this, the Swiss Federal Council issued a decree dated 1 April 1887 that watch cases that were presented for hallmarking with a declaration that they were for export to Germany would be hallmarked as follows: 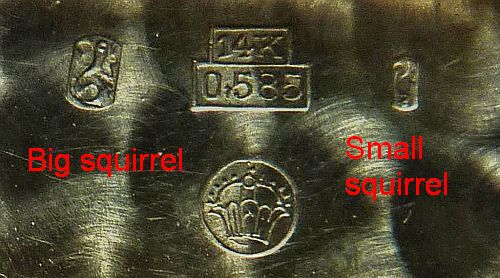 0·585 and Two Squirrels on Case for Export to Germany
Image © Bernd R.

It was permissible to strike the hallmarks to the right and left of the fineness mark, according to the space available, which has been done on the case shown in the image here.

The shape of the mark and the initials are presumably a reference to the case manufacturer, possibly to comply with the German law. But they are not very clear or documented. Swiss watch cases had to be hallmarked in a government run bureau de contrôle, the equivalent of a British assay office, so if any dispute arose about the fineness of the case, the Swiss government could be held liable, which rendered the manufacturer's trademark unnecessary and use of fineness marks with the manufacturer's initials appears to have ceased quite quickly.