Stauffer, Son & Co. was an important Swiss watch manufacturer founded in 1830. Over the years it gradually discovered that was more profitable to buy watches from other manufacturers, one of which it is well known was IWC. Less well known is Stauffer's purchase of watches from Eterna, which eventually spun its movement arm off as ETA. The connection between Stauffer and Eterna was difficult to establish because Stauffer had Eterna supply them with movements that were not only stamped with Stauffer's own S&Co. trademark but had the visible bridges a different shape to those on the same movements that were branded Eterna. Read on below for the full story . . . 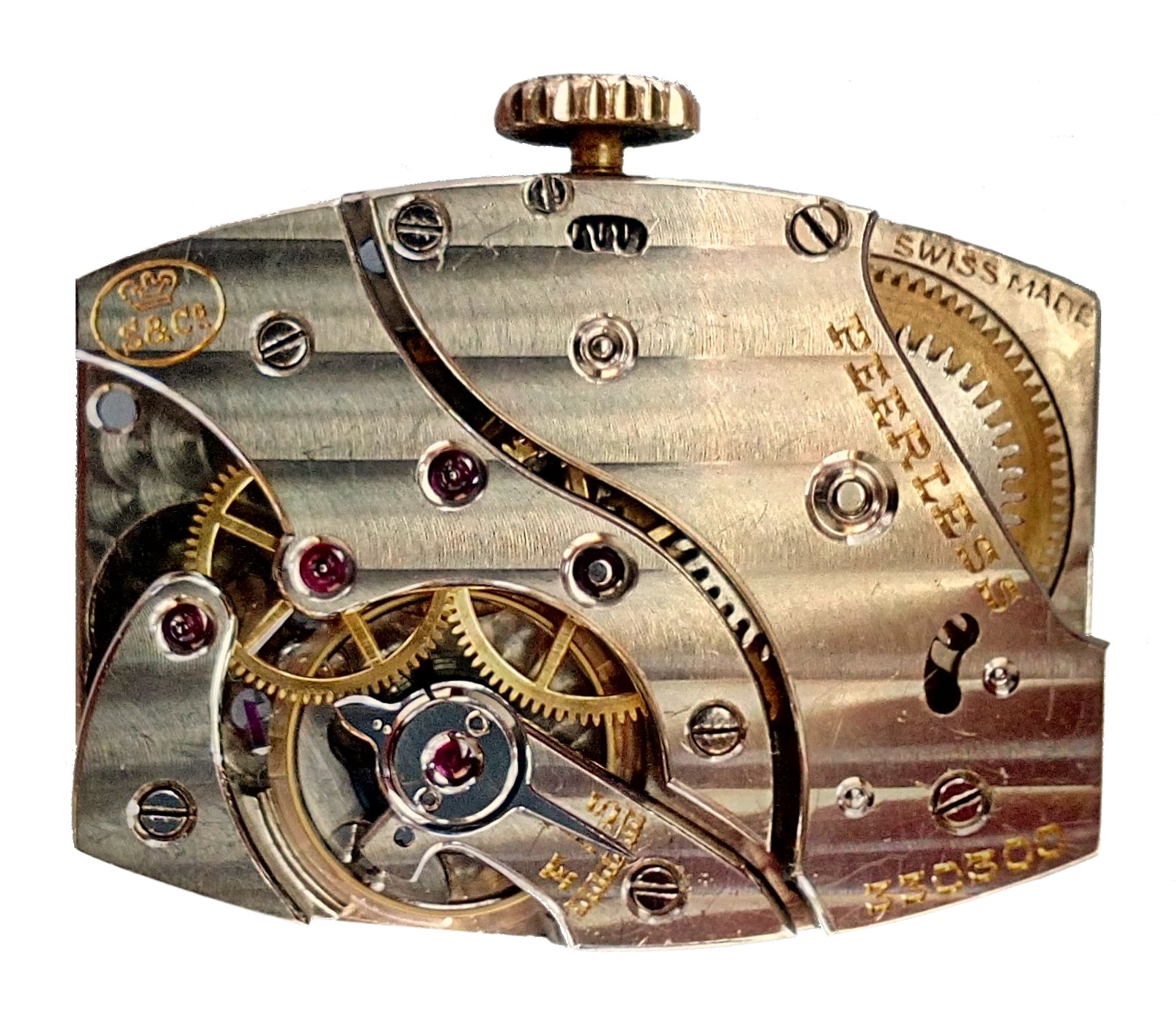 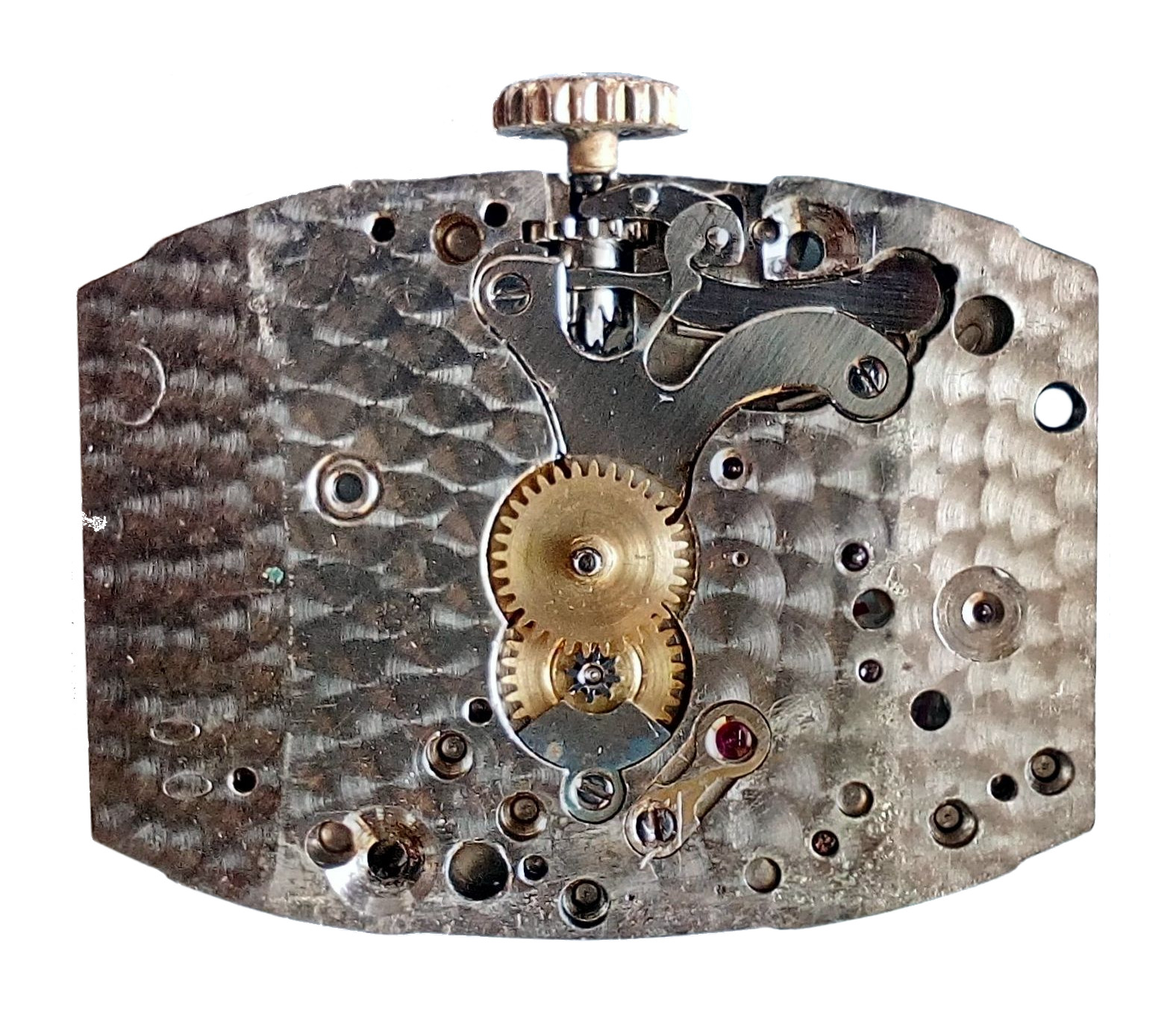 Eterna cal. 710 Bottom Plate. Click images to enlarge.
Thanks to Geoff for the pictures, © Geoff P 2017.

Another movement that Eterna customised for Stauffer & Co. was their calibre 710, which was a tonneau or barrel-shaped movement. The photographs here of a watch marked with the Stauffer & Co. trademarks of S&Co under a crown in an oval and the name Peerless are thanks to and © Geoff P. The same movement is also seen with Stauffer's three triangles trademark and with the Peertone name. Because of the association with Stauffer this is sometimes taken to be an IWC movement, and it does have some superficial similarities to the IWC calibre 87, but the movement in the photographs here definitely has nothing whatsoever to do with IWC. 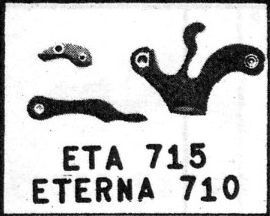 The significant measurement of a tonneau movement is the width. This watch is approximately 20mm or about 8¾ or 9 lignes across. The Bestfit Book shows a number of 8¾ shaped movements, including the diagram shown here of the parts of the keyless mechanism of ETA calibre 715 and Eterna 710. The most significant part for identification is the largest part, the cover plate with integrated detent spring. This is called the "setting lever spring" in Swiss parts lists, with the generic part No. 445, or "set bridge" in American parlance. The other two parts shown are the setting lever and the yoke that moves the sliding pinion.

The shape of the parts of the keyless mechanism of Swiss watches are a "fingerprint" so unique that the Bestfit Book does not show any other part of the movement for identification purposes. A watch repairer needing a spare part would take the movement from the case, remove the hands and dial, and then use the size and basic shape of the movement together with the unique shape of the keyless parts to make the identification and then order parts, confident that they would fit the movement in his hands, and often no other movement. The Bestfit diagram shows that this keyless mechanism is identical for ETA calibre 715 and Eterna 710, and the list of factories and calibres confirms that the Basic Model or base movement of the Eterna 710 is the ETA 715. These two calibres might have some differences in appearance but the main parts, the barrel, train escapement and keyless mechanism, and especially the mainspring, balance staff and stem, the parts most likely to need replacing, are the same. 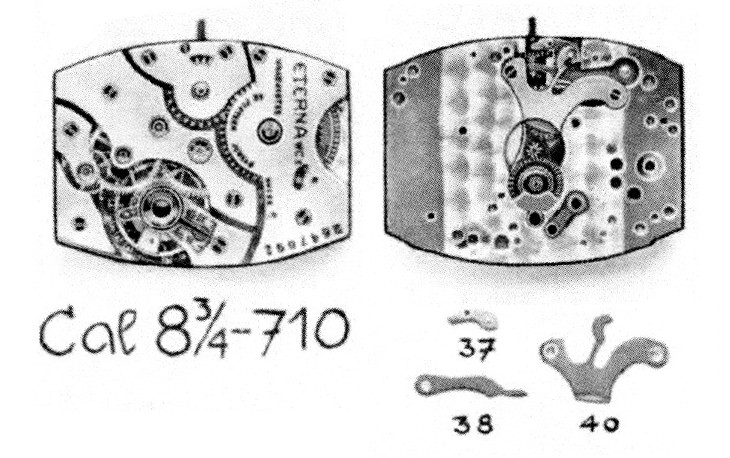 The setting lever spring was an evolution of the earlier simple cover plate that kept all of the parts of the keyless mechanism in place. Stem set keyless mechanism needs a detent to hold the crown in the setting position. In early stem wound and set watches the usual Swiss "positive" set keyless mechanism (in contrast to American or negative set) incorporates this detent as part of the mechanism, usually a notch on the yoke, whereas in later watches it is integrated into the cover plate as in this watch. The long thin arm acts as a spring, the two notches at the end serve as detents that hold the setting lever in either its usual winding position or in the hand setting position when the crown and stem are pulled out. It is not known exactly when this modification to the cover plate was introduced, but it seems to have been in the late 1920s or early 1930s, and it might have been Eterna who introduced it. If you have any knowledge about this, please let me know.

The diagram from Jobin's "La Classification Horlogère Suisse" 1936 edition shows an Eterna calibre 710. The ETA calibre 715 Eterna 710 are identical in their vital parts but differ in appearance. The ETA 715 has exposed winding wheels, the crown wheel and ratchet wheel, the Eterna 710 has the winding wheels concealed below the top plate. This was almost certainly done specifically for the English market. English made watches always had concealed winding wheels and critical English customers considered that exposed winding wheels were a sign of a foreign, and therefore inferior, watch. This attitude was a hang over from the days when English watches were considered the best in the world - at least by the British.

The company that became Eterna was founded in 1856 by Dr. Josef Girard and Urs Schild. In 1932 Eterna spun off its movement making side as ETA SA to supply ébauches to other Swiss watch assemblers. Eterna SA continued to make watches, using ébauches from ETA, and sometimes from other ébauche makers.

So we know that the movement is an Eterna calibre 710 and that it has concealed winding wheels like the calibre shown in Jobin. But the top plate of the watch in the photographs is different from that of the Eterna 710 illustrated in Jobin. Like the Eterna 520 discussed in the earlier section, this was because Stauffer asked Eterna to make these changes to the appearance of the movement so that it was unique to Stauffer and could not be easily recognised as an Eterna calibre, except by a watch repairer with a Bestfit Book or similar.

It was very common for the Swiss ébauche manufacturers to make variations of a basic movement by changing the appearance of the top plate. This enabled them to supply ébauches that were apparently different but actually identical in all other respects to different watch assemblers. It was easy to do because the plates are not functional components, they just sit there and form bearings for the functional parts. Changing their shape has no effect on the function of the movement so long as the bearings remain in the same place. The vast majority of the components, including the bottom plate, remained exactly the same, but by changing the shape of the bridges and cocks while still leaving all the pivot holes in the same places, a movement could be given a very different appearance.

Sometimes I hear people say that similarities in appearance between watch movements show that there must have been some collaboration between their different manufacturers. This is not the case. The Swiss watch industry was fiercely competitive and different movement manufacturers did not collaborate. If two movements appeared with very similar appearance, this was due to coincidence not collaboration. In fact, designing a movement was the easiest part of a manufacturers work, there are only so many ways you can arrange the parts. The most difficult part was designing and making the specialised machines that would manufacture the tiny components to the necessary precision, and spit them out faster and cheaper than their competitors machines. Designing an end stone setting, a plate that holds the jewel and one or two tiny screws to hold it in place, is very easy. Imagine how much harder it is to design a machine that will automatically turn, thread slit and polish those tiny screws, only a fraction of a millimetre in diameter, and that will quickly produce thousands of such screws to exacting tolerances without human intervention. The specialised machines to make the parts are where the real hard work and investment lay, details of which rival watch manufacturers guarded carefully.