The section reproduced here is from my page about watch movements. 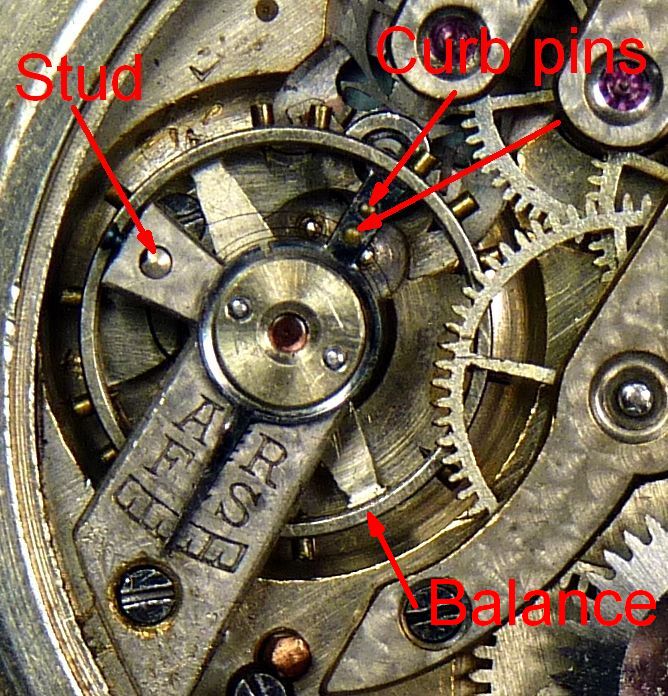 ARFS on a Watch Regulator: Click image to enlarge.

By far the commonest question I get asked is “what do the letters on the movement A.R.F.S or F.S.A.R (or sometimes just FS or AR) mean?”.

David Duff has seen a Henry Moser watch with V and N instead of F and S and concludes that these are for the equivalent German terms Vorrücken and Nachlassen.

The balance and its spring form a simple harmonic oscillator that oscillates with a constant frequency, controlling the rate at which the watch runs and determining its timekeeping.

The frequency of oscillation of the balance is usually expressed by watchmakers in “vibrations”. With most types of escapement a vibration is the same as one tick, the click made when one tooth of the escape wheel "escapes" and the whole train moves forward one step. The escapement makes a tick when the balance swings one way, and another when it swings back. Each tick is half of a complete oscillation expressed in Hertz (Hz), the number of complete oscillations it makes in one second. A typical watch from the early twentieth century, has a balance frequency of 18,000 vibrations per hour, or 18,000 vph. This is five vibrations per second, or 2.5 Hz. Some more modern watches have faster trains, 21,000 vph or even 36,000 vph, in an attempt to improve their timekeeping.

The frequency at which the balance oscillates is determined by its rotational inertia and the strength of the balance spring. Think of a weight hanging from a spring. If you pull it down and let go, it will oscillate up and down at a certain frequency. The balance and its spring work in exactly the same way, but in rotation rather than up and down.

The type of regulator shown in the first photograph is called a Bosley regulator. The regulator lever is mounted on the balance cock, it has a circular centre section that is held in place by the upper cap jewel setting so that the lever turns co-axially with the balance staff. The short end of the lever carries the two curb pins which project downwards and embrace the outer coil of the balance spring. The long end of the lever projects over a graduated scale which is there for visual reference only, it is not calibrated. The letters A.R.F.S or F.S.A.R show which way to move the regulator lever to make the watch go faster or slower.

What the Regulator Can Tell

Small offsets of the lever from the centre are of no great consequence to the functioning of the watch, but if the regulator lever has to be near to one end of the scale, or even off the scale, for the watch to keep good time, this tells you that something is wrong, most likely that the watch needs a service to replace old gummy oil with fresh new oil.

Which Way to Turn? 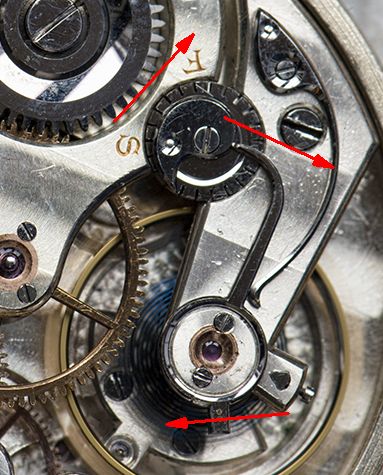 In the first picture above the letters A.R.F.S or F.S.A.R show which way to move the regulator lever to make the watch go faster or slower. It is easy to see that turning the regulator lever anti-clockwise towards the "R" and "S" indications for slower would move the curb pins towards the stud, making the free part of the balance spring longer and the watch run slower, and vice versa.

Sometimes watches are fitted with additional complications that make it possible to achieve finer adjustments to the regulator, such as the regulator of an Omega pocket watch shown in the picture here, which has a modified form of the Reed's regulator that is described further down on this page. In addition to the regulator lever there is a disc with a snail cam on it. The snail cam is so called because it looks like a profile of a snail's shell, with a radius that starts small and increases as the cam is turned. A spring holds the bent tail of the lever against the snail cam.

Turning the disc rotates the snail cam which causes the lever to move, but at first glance the letters "F" and "S" might not show clearly which way to turn the cam. This is easy to work out by remembering that moving the curb pins towards the stud makes the free part of the balance spring longer and the watch run slower, and moving the curb pins away from the stud has the opposite effect.

Looking at the red arrows in the picture you can see that turning the adjuster counter-clockwise towards the "F" causes the snail cam to move the regulator lever towards the spring, which moves the curb pins away from the stud, making the effective length of the balance spring shorter and the watch run faster. The marks on the disc are simply there for visual reference, they are not calibrated and variations in timing are done by experiment, moving the lever slightly and seeing how much effect this has on the timekeeping, usually with the aid of a timing machine. 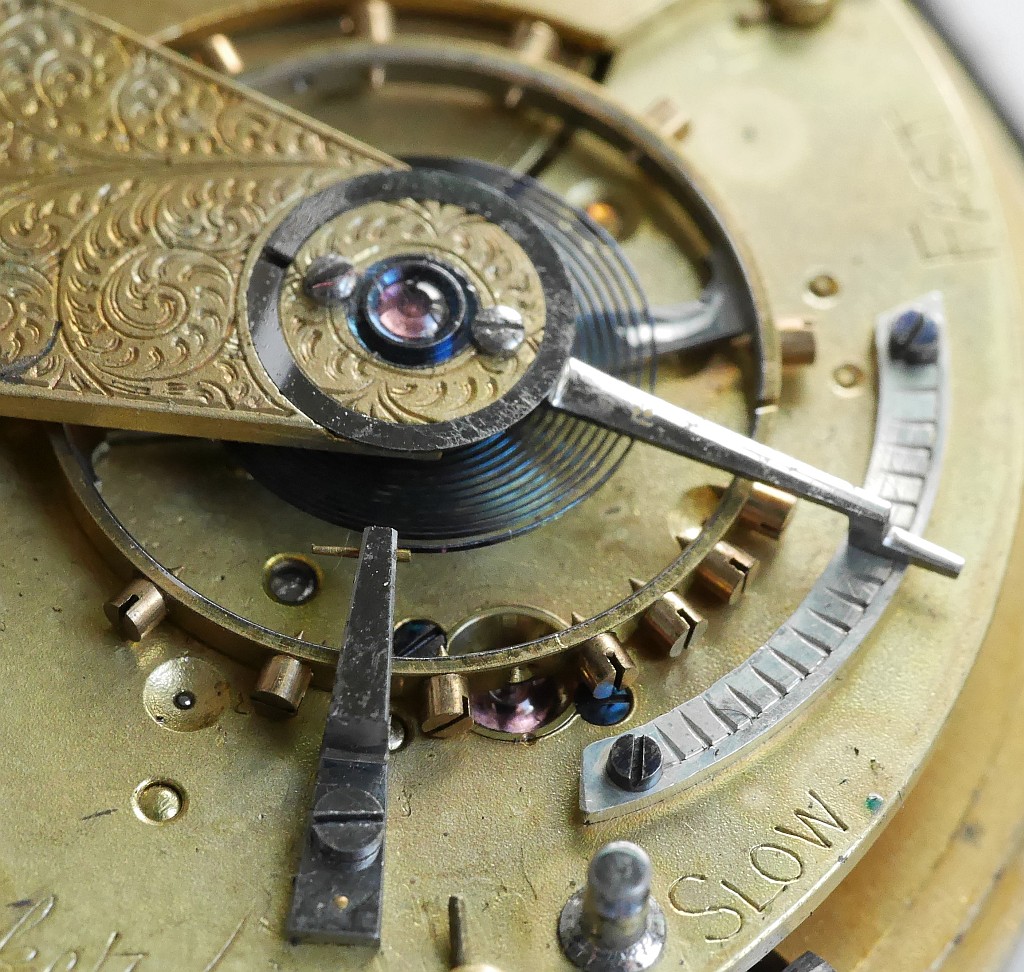 The type of regulator with just a simple straight lever, the type shown in the first photograph above, was invented and patented in 1755 by Joseph Bosley, and is hence called a "Bosley regulator". It formed the basis for almost every regulator design that followed.

The photograph here shows an earlier form of Bosley regulator. This one is on a nineteenth century English pocket watch with a fusee movement and lever escapement.

The Bosley regulator lever has a circular section that is held in place on the balance cock by the upper cap jewel setting so that the lever turns co-axially with the balance staff. The under side of the lever carries the two curb pins, which are not visible in the photograph, that project downwards and embrace the outer coil of the balance spring. The long end of the lever projects over a graduated scale which is there for visual reference only, it is not calibrated. The scale of this watch is made from sterling silver. The end of the lever projects past the scale so that it can be moved with a finger nail. Fast and Slow are engraved on the plate to show which way to move the regulator lever to make the watch go faster or slower.

It is not easy to make fine adjustments with the standard regulator. A small movement results in a large change in daily rate, so over the years many additional devices have been added to allow fine adjustments to the position of the lever. These usually take the form of either a screw or a cam that can be turned slightly to move the lever a very small amount. Whatever principle they are based on they all have the same end in mind, to allow very fine adjustment of the regulator lever, so they all come under the general description of "micro regulator".

In 1867 the American George P. Reed invented and patented an improvement to the Bosley regulator, US patent No. 61,867 dated February 5, 1867. This was a precision adjuster for the regulator lever consisting of a spring curved around the lever to bias it in one direction, with a screw used to move the lever in the opposite direction against the spring. Reed's addition to the Bosley regulator allowed finer adjustment to the regulator than can be achieved by simply moving the index lever with a finger or the tip of a screwdriver. 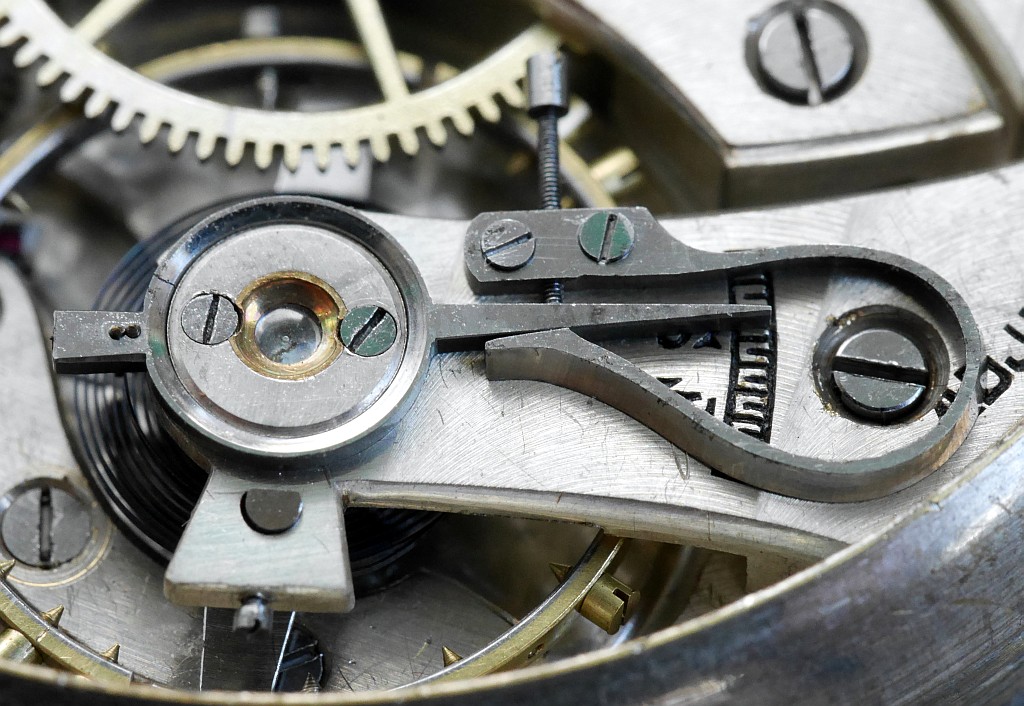 In the figure from Reed's patent reproduced here you can see the swan neck spring "d" which curves around the lever of the Bosley regulator, and the adjuster screw "e" which passes through a threaded hole in the end of the spring "c". Screw e is screwed in or out to regulate the watch. In practice the end of the spring "c" is usually made in the form of a block with locating pegs and a securing screw or screws.

Reed's regulator was first used on watches made by Edward Howard in the USA, and after the expiry of the patent was widely used by watch manufacturers in America, Switzerland and Germany. There were many other types of micro-adjuster devised by inventive minds over the years, but Reed's design was simple and elegant and is still used today, in either its original form such as the one shown here on an Electa movement, or in one of many variants such as the Omega version pictured above with a snail cam instead of an adjusting screw.

This is probably the earliest form of watch regulator. Thomas Tompion made the first English watches to have a balance spring in 1675, as part of Robert Hooke's efforts to show that he had invented the balance spring. A watch made by Tompion and presented to King Charles II was inscribed "Robert Hooke invent. 1658. T. Tompion fecit, 1675". This watch is lost and the exact form of the balance spring is not known, but later Tompion watches have the form of regulator shown here, which as a consequence is often called Tompion's regulator. 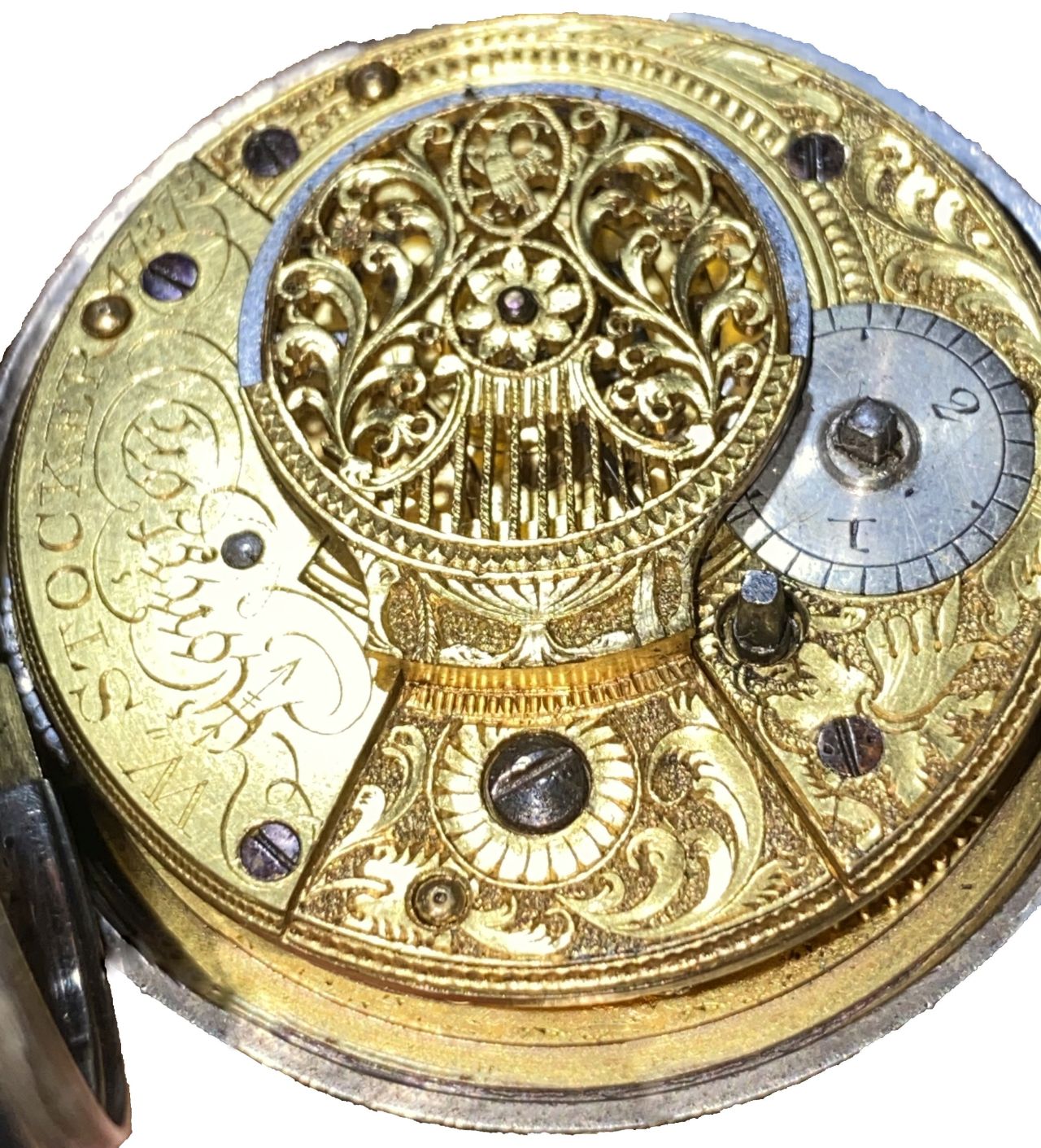 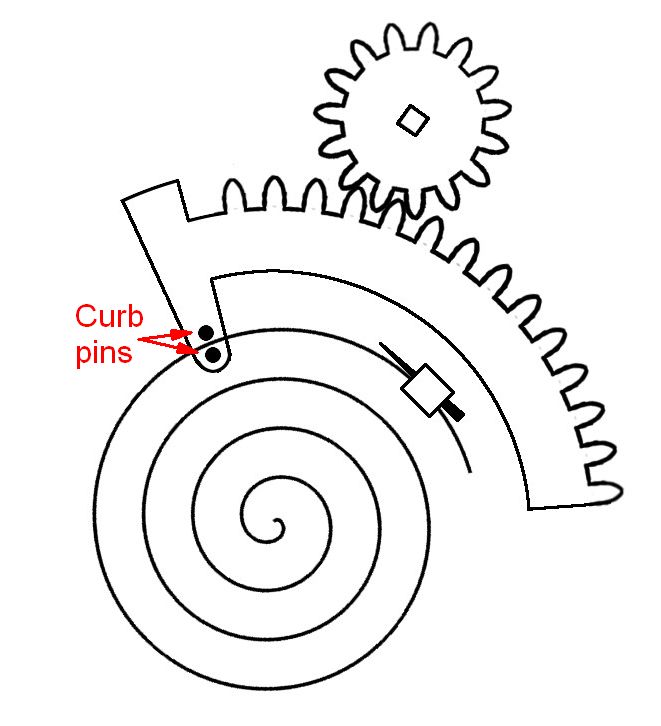 Usually you can't see the rack and pinion, but a silver disc mounted on the arbor of the pinion is visible, set into the top plate. This plate is engraved with arbitrary numbers that are helpful as a relative reference when making adjustments.

In fact, it seems that although Hooke had been working on applying springs to watch balances for some years, it was Christiaan Huygens of the Netherlands who first came up with the idea of using a spiral balance spring, and it seems that watches with spiral balance springs and the type of rack and pinion regulator shown here were made by Thuret in Paris for Huygens before than Tompion's watches, so this should really be called Thuret's regulator, but I doubt that this will happen!

Some watches don't have regulators. These are carefully adjusted at the factory and there is no easy way to change their rate. They are called "free sprung".

The benefit of an index-less or free sprung watch is that there are no regulator curb pins to interfere with the balance spring. It is very difficult to make a pair of curb pins grip the balance spring with exactly the right amount of force. Too tight and the spring will kink when the regulator is moved, too loose and the part of the spring between the regulator and the stud can flex, upsetting the consistency of the timekeeping.

Point of attachment effects are important in very high precision timekeepers, but is not really of concern for everyday use where other effects such as the thickening of the oil over time dominate, so regulators continue to be fitted to mechanical watches. And with a bit of good engineering they provide a visual treat that free sprung watches lack.