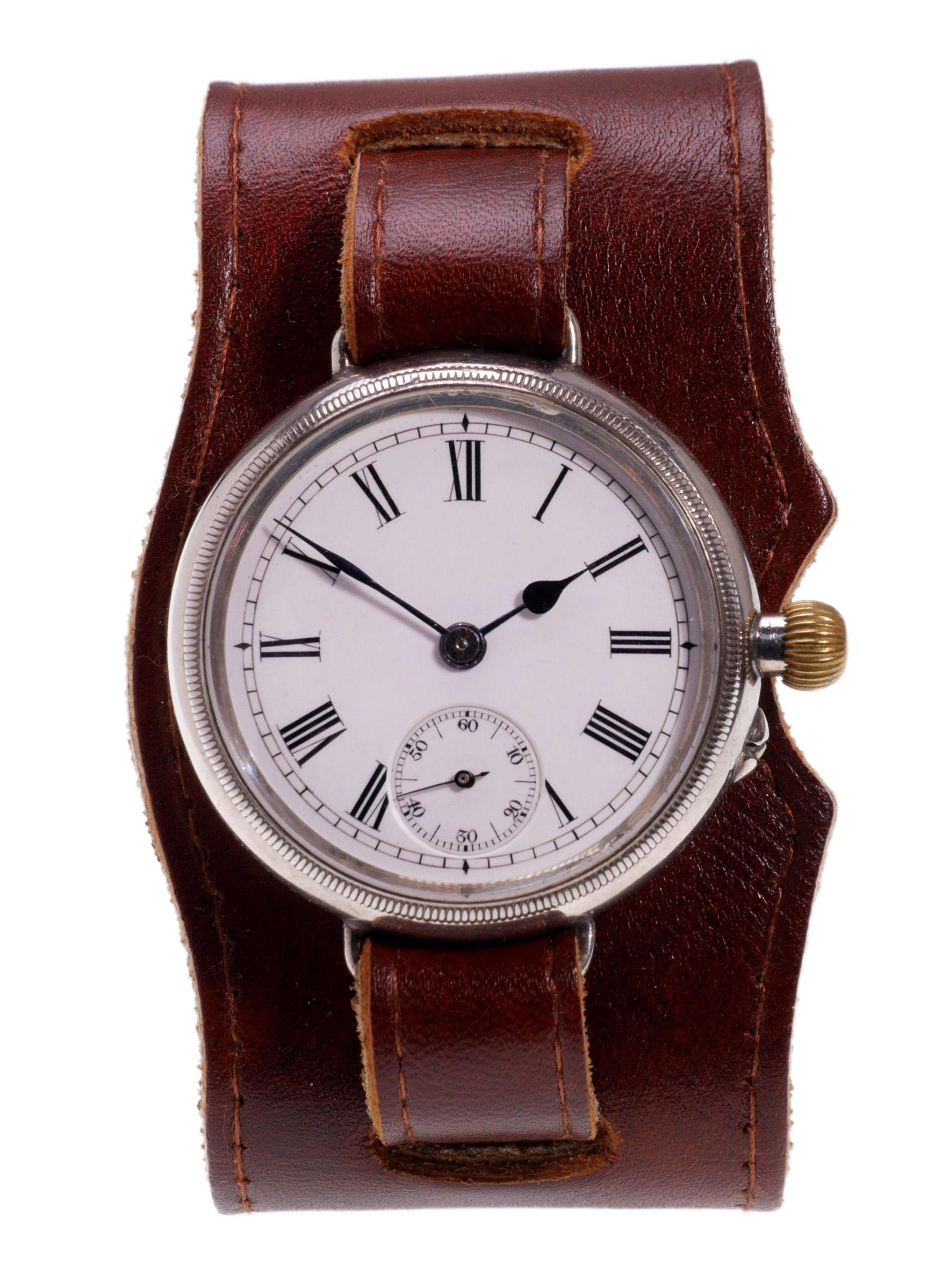 This simple and elegant wristwatch is the earliest International Watch Company (IWC) wristwatch that I know of. It was made in 1906 and supplied to Stauffer & Co. in London in January 1907.

It is a man's size wristwatch, measuring just under 34 millimetres across the case, not including the crown. In the photographs the watch is shown wearing one of my Type B replica vintage watchstraps in dark chestnut Italian leather, with a Type GW hallmarked sterling silver buckle.

Before I acquired this watch I had spent some time researching IWC watches, pocket and wrist. This was not my first IWC wristwatch, but it is the most interesting. At the time there was a lot of confusion about the relationship between Stauffer & Co. and IWC. Some people thought that all Stauffer watches were made by IWC (some still do!) which is not the case.

The real relationship was that Stauffer took on the British agency for IWC in 1894, alongside their long established business of wholesaling watches made in their own Swiss factory, and others. This is explained on my pages about Stauffer and IWC. So when this watch became available I had a good idea what it was, and why it was interesting. 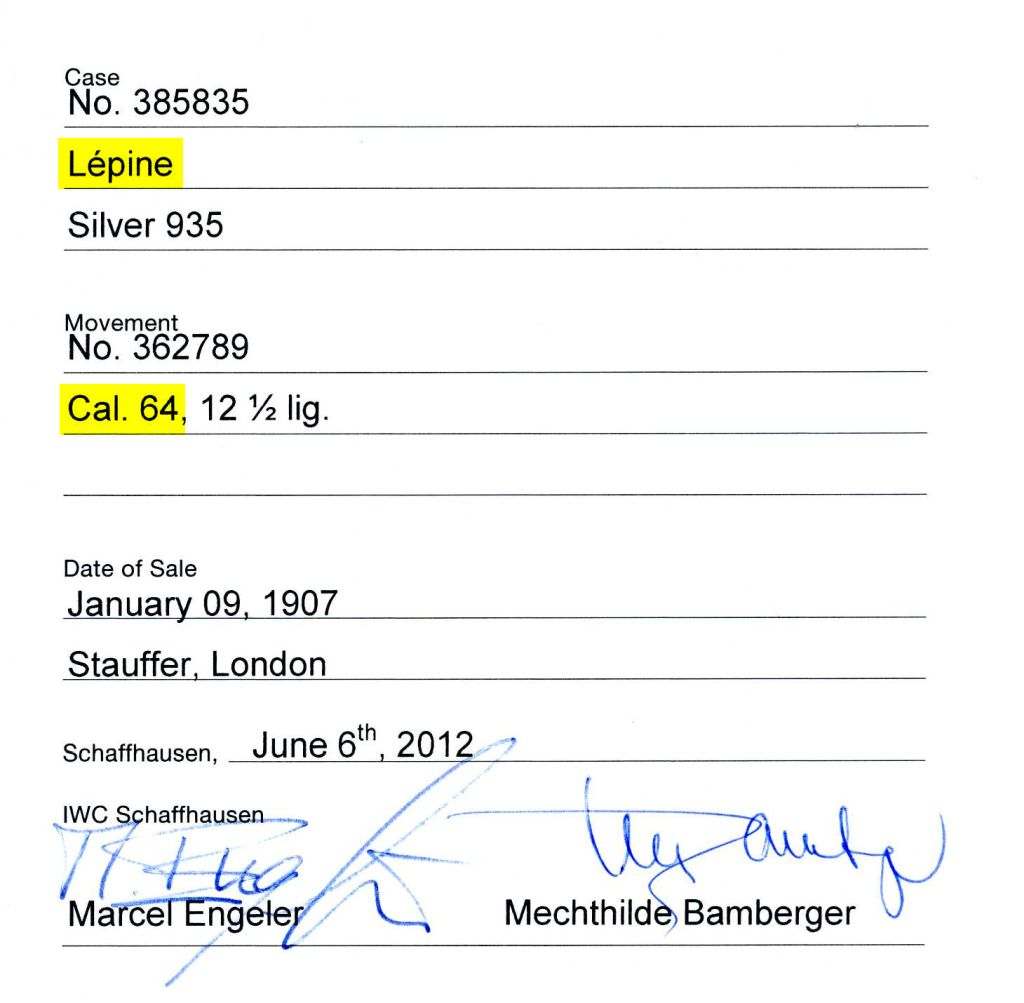 Extract from the IWC Archives: Click image to enlarge.

IWC provided me with the ‘extract from the archives’ shown in the image. This shows that the finished watch was supplied to Stauffer & Co. on 9 January 1907. The IWC sales ledger for this transaction shows that the case was in polished silver and, most interestingly, ‘avec anses’; that is ‘with handles’, the term used at the time for the fixed wire lugs used for a wristwatch.

The watch has an IWC calibre 64 savonnette manually wound movement, stem wound and pin-set. Although the movement is a savonnette (hunter) layout, the extract from the archives, copied faithfully from the original sales ledger, shows a wristwatch case described as Lépine, that is, open face.

This is the paradoxical secret of making wristwatches like this one, with the now-familiar layout of lugs top and bottom, the crown at three and small seconds at 6. A savonnette movement was put into a specially made Lépine case. This was unusual at the time; but it was not an accident, and it certainly was not a conversion of a small pocket watch into a wristwatch. This watch was deliberately made as a wristwatch, with a wristwatch case specially ordered for the purpose. 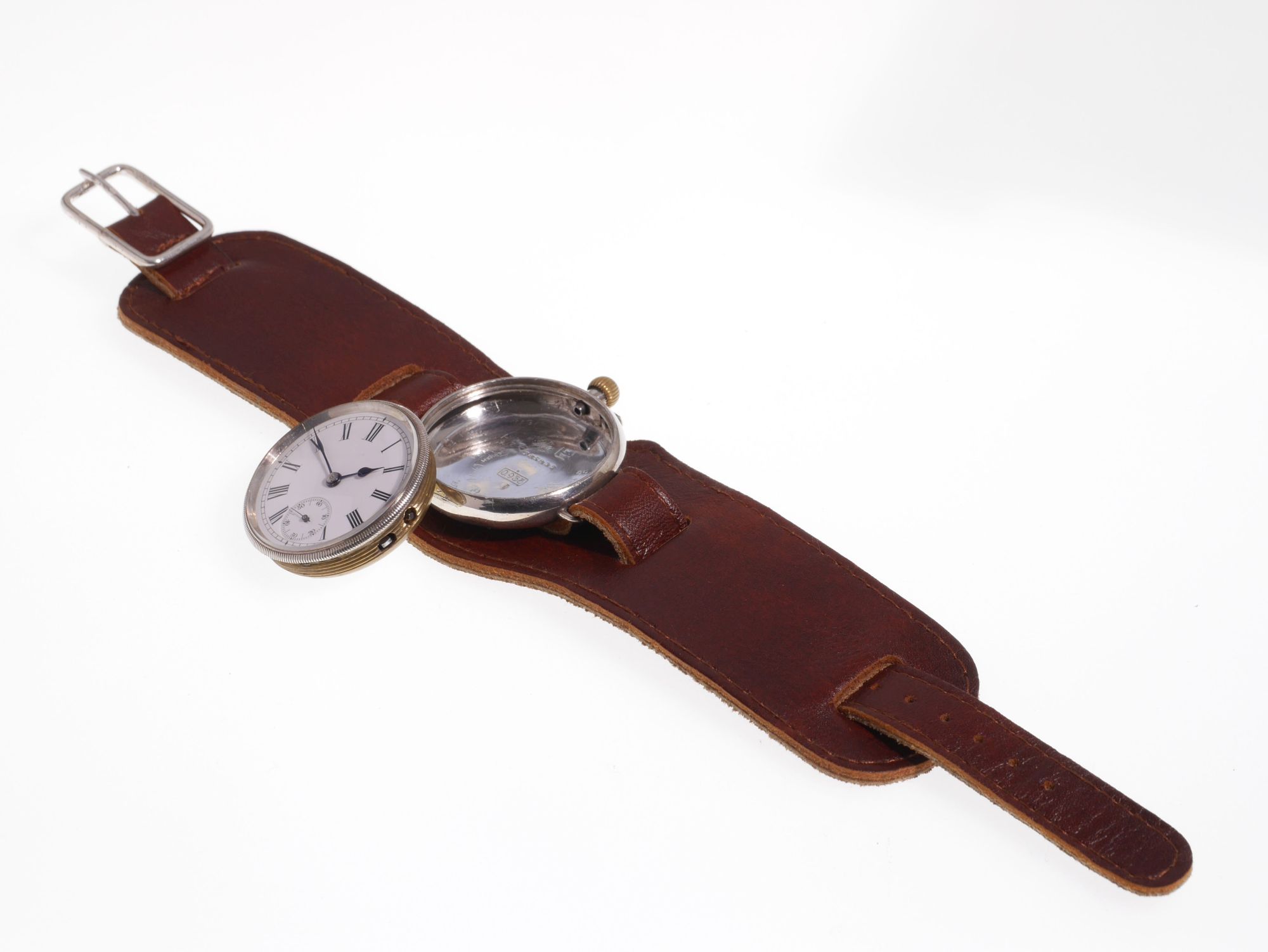 The watch has a Borgel screw case. It is not only the earliest IWC wristwatch I know of, it is also the earliest Borgel wristwatch I know. IWC records show that their order to the Borgel watch case company in Geneva for the case was made on 15 September 1906. IWC did not make cases and were already a regular customer of Borgel, as well as other case makers. IWC pocket watches are often seen with Borgel screw cases, each of which made the 325 km (200 mile) journey from Borgel's factory in Geneva to Schaffhausen.

The small image, which you can click on to enlarge, shows the movement out of the case. To remove the movement from a Borgel screw case it is not necessary to take the watch off its strap. You simply pull out the crown against a spring and, while holding the crown, use the milled bezel to unscrew the movement from the case. Do not lever off the bezel with the movement in the case, because attempting to press the bezel back on can damage the screw threads in the case, making it impossible to unscrew the movement. When the movement is out of the case, it can be replaced by again holding out the crown and screwing it back in. Be careful to make sure that the threads are correctly engaged because they are very fine and easy to get crossed. Patience and a delicate touch are the secret. 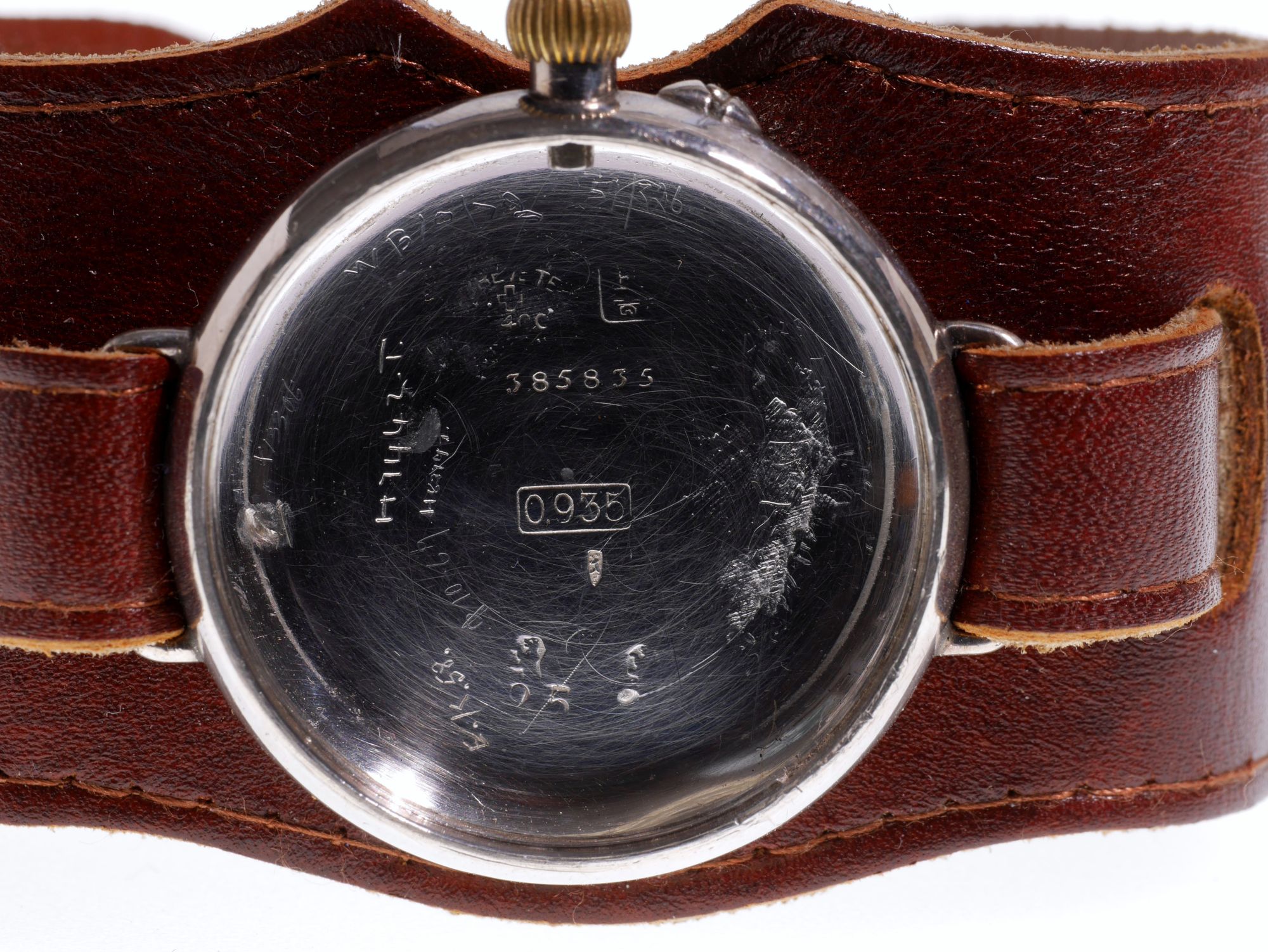 The markings inside the case back are the Borgel trademark of François Borgel's initials FB above a key, the symbol of the city of Geneva where Borgel had his watch case factory, and BREVETÉ

There are also Swiss hallmarks for what the Swiss authorities thought at the time was sterling grade silver, a 0·935 fineness mark and the contrôle mark of three bears, the equivalent of a British hallmark.

This watch was imported in January 1907, before the British Act Assay of Imported Watch-Cases came into effect on 1 June 1907. This is why the case does not carry British hallmarks. Before the Act it had always been illegal to sell imported watches with gold or silver cases in Britain if they were not hallmarked but, due to a truly massive oversight by the British authorities, imported watches with gold and silver cases that were not hallmarked were sold freely. This was brought to light in 1904, and the 1907 Act made it clear that that, from 1 June 1907, all imported gold and silver watch cases had to be assayed and hallmarked in a UK assay office.

Borgel supplied the case to IWC blank, without a serial number. Engraving and polishing of cases was done by IWC at Schaffhausen, and the serial numbers of cases were applied by IWC.

The hand scratched marks inside the case were made by watch repairers who serviced (cleaned and oiled) the movement. The marks would mean something to the repairer, but they used their own code so that marks couldn't be forged and a false claim made. All mechanical watches need to be cleaned and oiled every few years to keep them running properly, and to avoid wear and damage.

These marks are all well rubbed now and a little difficult to see. If you click on the image to expand it, the larger image has annotations pointing to each mark and explaining what they are. 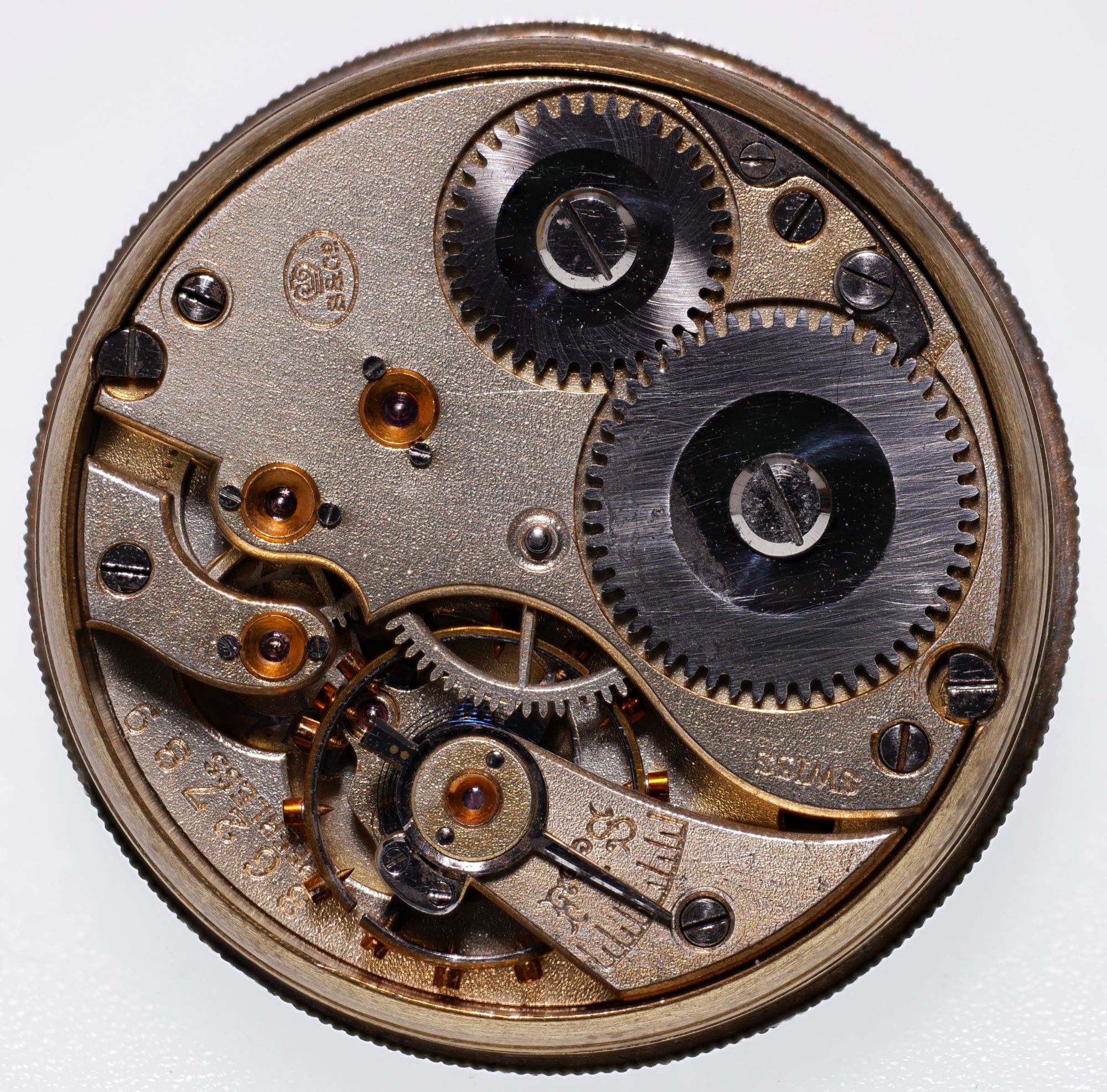 To the casual observer there is no obvious sign that this movement originated at the IWC factory in Schaffhausen. There is the trademark logo, the S&Co. under a crown inside an oval, of Stauffer & Co., London. There is also the word Peerless written on the bottom plate under the balance, but that too was a Stauffer trademark.

However, the shape of the plates is unmistakeable as an IWC calibre 64 movement, which is a savonnette layout, manually stem wound and pin-set. Pin set means that a small pin in an olivette on the side of the case is pushed in to put the keyless mechanism into hand setting mode. This is usually necessary with a Borgel screw case because the stem is in two parts, the outer part being engaged with the inner part by spring pressure and withdrawn to allow the movement to be screwed in and out. The split stem means that a pull on the stem cannot be used to put the keyless mechanism into hand setting mode, hence the pin set.

Savonnette movements like the calibre 64 have their fourth wheel, which carries the seconds hand, planted at right angles to the centre line or axis of the winding stem. They are usually found in savonnette (hunter) cases with a lid over the crystal because the layout is convenient for a watch with a button that is pressed to release the lid, or the lid lifted manually. A savonnette watch with a savonnette movement is usually held in one hand to read the time, with the lid being opened by the other hand. The lid is hinged on the side opposite to the crown, and it is convenient to hold the watch sideways, so the 12 is placed at the top of the dial, the crown at 3 o'clock and the small seconds at 6.

Lépine (open face) watches have Lépine movements, which have the fourth wheel in line with the axis of the stem. The 12 is at the top of the dial beneath the crown, with the small seconds at 6 o'clock at the bottom of the dial. the A Lépine watch doesn't have a lid, so it can be withdrawn from a pocket on a chain and the time read while it is hanging, which is why the 12 is at the top of the dial and the small seconds at the bottom.

A wristwatch is most useful because, and only if, it can be read without needing to use both hands, which means that it has to be open face. However, the layout of an open face Lépine watch is not convenient for wrist wear. To put the crown in a convenient position away from the attachments for the strap, the watch would have to be rotated though 90°, which puts the 12 on one side and the small seconds opposite. The ideal layout of a movement for a wristwatch is a savonnette, so that is what was used, but put into an open face Lépine case. This unusual combination of a savonnette movement in a Lépine case is why many early wristwatches have the 12 coloured red or blue, to draw attention to the fact that it is not in the usual place.

The first IWC calibre 64 movements were made in 1892, the last in 1931, a very long life cycle of nearly 40 years. The calibre 64 movement in this watch is an early 12½ lignes version, with single screws holding the crown wheel and ratchet wheels of the keyless winding mechanism, rather than the three screws of later versions which were introduced by patent 31457.

The calibre 64 movement has a jewelled Swiss straight line lever escapement, a cut bimetallic temperature compensation balance and blued steel balance spring with a Breguet overcoil. The balance has gold timing screws which are moved to different positions along the bimetallic arms to alter the amount of temperature compensations. Gold was used because it is denser than other metals, so a timing screw made from gold is heavier and more effective. The balance oscillates at 18,000 vph. There are 15 jewel bearings, the top jewels for the pivots of the third, fourth and escape wheels are set in gold chatons.

The bottom plate has two holes for dial feet, whereas later calibre 64 movements have three. When I acquired this watch the dial has been changed for a later dial with the IWC logo, tumbling numbers and a too-small minute track. This was no doubt done to boost the selling price of the watch at a time when people didn't realise that British retailers did not allow foreign manufacturers to put their names on the dial. It wasn't until the late 1920s that the names of Swiss manufacturers started to appear on the dials of watches sold in Britain. When I went to change the dial for the correct style now fitted, I discovered that the dial feet had been removed, confirming that the IWC dial was from a later movement and did not fit, which is why the dial feet had been cut off.