Blog: Anatomy of a trench watch

The section below is from my page about Great War trench watches.

Anatomy of a Trench Watch

Many people call any watch with wire lugs a "trench watch", even watches that are clearly ladies watches (which I discuss at Ladies "trench" watches?). But are there any features that distinguish a "trench watch", i.e. one that was designed to be used "at the front" in the trenches during the Great War, from other wristwatches of the period? Yes, there are; the two principal features are luminous dials and unbreakable crystals, and the ultimate is a wristwatch with a luminous dial, unbreakable crystal and waterproof Borgel case.

Wristwatches that were going to worn in the trenches would be exposed to dusty and damp, often wet, conditions, so a feature that was appreciated by military men was a waterproof case. The Borgel name never appears in the adverts of the period, but references to patent screw cases and pictures of watches with the typical Borgel features of a milled bezel, onion crown and pin set for setting the hands are found in many adverts of the Great War era and show that a watch with a Borgel case was often the wristwatch of choice for the officer preparing to go to the front. 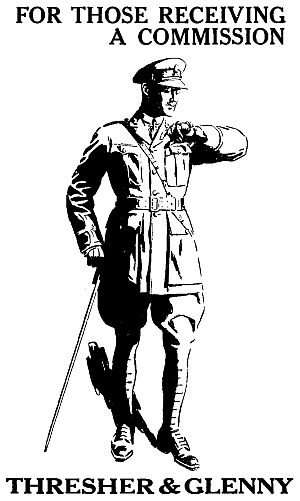 From Thresher and Glenny advert 1916

The eminent military historian Dr. Spencer Jones told me that The phrase "a proper wristwatch" (to denote a smart looking officer) had certainly emerged by summer 1916. A smart looking officer, such as the one shown in the extract here from an advert by the leading London gentleman's outfitters Thresher and Glenny from 1916, would want to make sure that he had all the latest military kit; after all, his life might depend on that kit. So what would a wristwatch that an officer, or an NCO or "other ranks", was wearing in the summer of 1916 look like, and how did it differ from pre-war or civilian wristwatches?

It is of course impossible to know whether a wristwatch was actually used in the trenches purely from its appearance, but as the Great War progressed through 1915 and 1916 a number of features became increasingly important to the men at the front. Features that were of little importance to the civilian population, but became vital in the cramped, wet, muddy trenches, where operations were often conducted in darkness, and lights could not be shown for fear of attracting enemy fire.

Wristwatches were made before the Great War in small numbers, and watches from the pre-war period will certainly have been taken or pressed into service when the war broke out, either existing wristwatches or converted fob watches. There is a popular story that ladies had their fob watches converted into wristwatches to give to their man when he went off to war and that these are called “sweetheart watches”. I am not sure whether there is any truth in this charming story. Conversions do not make a satisfactory wristwatch, and because the converted watches were made pre-war they are not luminous; an essential feature of an officer's watch. An officer would have purchased a proper purpose made luminous wristwatch, but an “other ranks” who couldn't afford, or didn't have access to, such a watch would perhaps have been happy to receive a sweetheart watch.

The easiest way for watch manufacturers to satisfy the sudden increase in demand for wristwatches that arose during the Great War was to add small loops of wire, called fixed wire lugs, to an existing design of small pocket watch so that it could be attached to a wrist strap. But the principal idea of a wristwatch was to enable the time to be easily read without using both hands, so wristwatches were made with open face cases. This presented a problem in that existing Lépine or open face watches had their crown at the 12 o'clock position and so were not ideal for for a wristwatch. When wristwatches are seen with the 12 o'clock at some unusual angle, this is often a sign that the watch was not actually manufactured as a wristwatch but was converted some time later, usually by a local jeweller.

Pocket watches called savonnette or hunter, with a hinged metal cover that protects the crystal, had the dial arranged so that with the winding stem at 3 o'clock the seconds dial was at 6 o'clock. It was a simple matter for a manufacturer to take a savonnette movement and put it into a Lépine or open face case that had loops of wire attached to take a leather wrist strap. Note that this was not a conversion of a pocket watch, it was putting together parts that were already being made in a way that they normally wouldn't be assembled. The case was specifically made to be a wristwatch case, without a pendant at all or with a shorter one than for a pocket watch, and with fixed wire lugs for the wrist strap. These were the first true, purpose designed, wristwatches 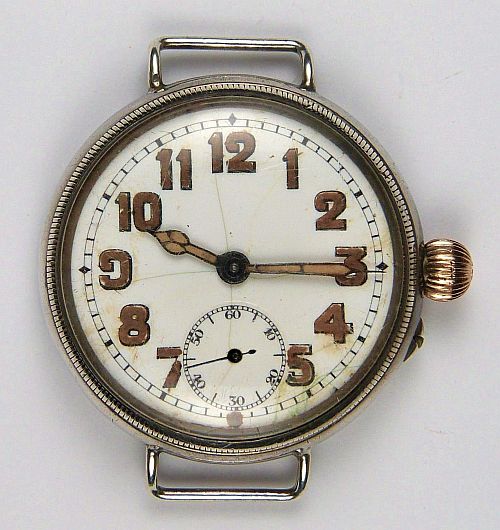 As the Great War went on, wristwatches were embodied with a number of features that mark them out as being intended to be used in the trenches. These watches were widely advertised in British newspapers and magazines as being suitable for "military and naval service".

The most obvious of these features are the luminous hands and numerals, so that the time could be read in the dark. From 1916 onwards unbreakable crystals became available and these were immediately regarded as an essential feature. The display of seconds was also important, I think essential for reasons I will explain below. And of course another feature that was very important in the trenches was resistance to dust and water.

It is often said that a watch that has the number 12 on the dial picked out in red (or sometimes blue) is a military watch, but this is simply not true. When the wristwatch was a new idea the position of the 12 wasn't immediately standardised at its now familiar position 90° anti-clockwise from the winding crown and so the 12 was often picked out in a contrasting colour to make it easy to quickly locate it. A red 12 isn't a sign of a military watch, or even of a man's watch; it was used just as much on ladies wristwatches in the early days of the wristwatch, before the Great War. Trench watches often do have their number 12 picked out in red as a carry on from this, but it is often impossible to see this below the luminous paint, which during the Great War was far more important.

Pictured here is a trench watch with a Borgel case and a high grade Electa 17 jewel movement with Reed's whiplash micro-regulator. In the case back are London import hallmarks for 1914/1915, and the outside bears the inscription Presented to Capt. Thorpe with best wishes from No 6 Reserve Bgde RFA(T) for Auld Lang Syne 1917. The initials RFA(T) refer to the Royal Field Artillery (Territorial). Captain Thorpe appears to have been George Robert Thorpe of the Honourable Artillery Company who was made an acting Captain on 3 April 1917 and was killed only a few days later on 25 April 1917. In early 1917 many RFA Brigades were detached from Divisions and placed under orders of higher formations, so the watch may have been a present to Captain Thorpe when this occurred, or on the occasion of his promotion.

This then is a genuine trench watch that we can be sure saw service during the Great War, and in my view it is a typical example of the archetypal service or trench watch. It has the luminous hands and numerals and unbreakable crystal that came to be regarded as essential features of a trench watch. The hands and numerals are skeletonised and have a thick paint applied to them. This paint was made luminous by the use of radioactive radium salts, and if the original paint is still present, as it is in this watch, it is still radioactive today, even though it no longer glows in the dark.

The small seconds display was an essential part of a trench watch. As Robert Nichols wrote in his poem "The Assault" (1916); “ The pale wrist-watch .... The quiet hand ticks on amid the din. ” Trench watches were of course quite likely to receive knocks for all sorts of reasons, and without shock protection (which didn't come in widely until much later) a sharp knock could break a balance staff pivot and stop the watch even though superficially it might still look perfect. The subsidiary seconds dial at 6 o'clock then becomes very important to reassure that the watch is working when it can't be heard ticking because of the deafening crash of an artillery bombardment.

Smith and Son advert May 1916 – Click image to enlarge

The Borgel case was one of the earliest cases that was designed to be resistant to dust and moisture, a serious problem in the trenches for a wristwatch in its exposed location, and it was one of the few dust and moisture resistant case commercially available during the Great War, the other being the screw back and bezel case made by Dennison and which is discussed above. But the Dennison case was made in England, which didn't suit the Swiss manufacturers who made the vast majority of wristwatches produced during the Great War, and so the Borgel case, made in Geneva, was very widely used for trench watches and it appears prominently (although unnamed) in many of the period adverts for "service" watches, such as the advert here by Smith & Son from May 1916.

Finally the large "onion" winding crown is very typical of a trench watch, it gives a good grip in what were most likely less than ideal conditions. These crowns are often worn down so that the fine ribbing or fluting, which is so well preserved on the one shown above, has disappeared.

The advert reproduced here from 1916 by Smith & Son Ltd. is quite interesting. It shows two trench watches, called the "Smith's 'allies' watch wristlet", both of which have Borgel cases, called a "screw in" dust and damp proof case in the advert, luminous hands and numerals and unbreakable crystals, or "unbreakable front" as the advert puts it. A Borgel case added considerably to the cost of the watch, at three pounds three shillings it was a lot more expensive than a watch that is available "without screw case" at two pounds ten shillings. The Borgel case was also a lot more dust and damp resistant than many people think today, which you can read about on my page about Borgel.

This is the earliest advert that I have yet seen for a watch with an unbreakable "UB" crystal, or unbreakable glass. The advert says No more watch glasses! No more watch glass protectors! It is impossible to break the front. Why? Because the front is of unbreakable material with the transparency of crystal glass. The unbreakable crystal appears to add five shillings to the cost of a watch, because the advert says that watch wristlets with ordinary glasses are available from two pounds two shillings, whereas the "Allies" watch in a non-screw case but with an unbreakable crystal is two pounds ten shillings, an extra eight shillings.