The section reproduced here is from my page about Temperature Effects in Watches. 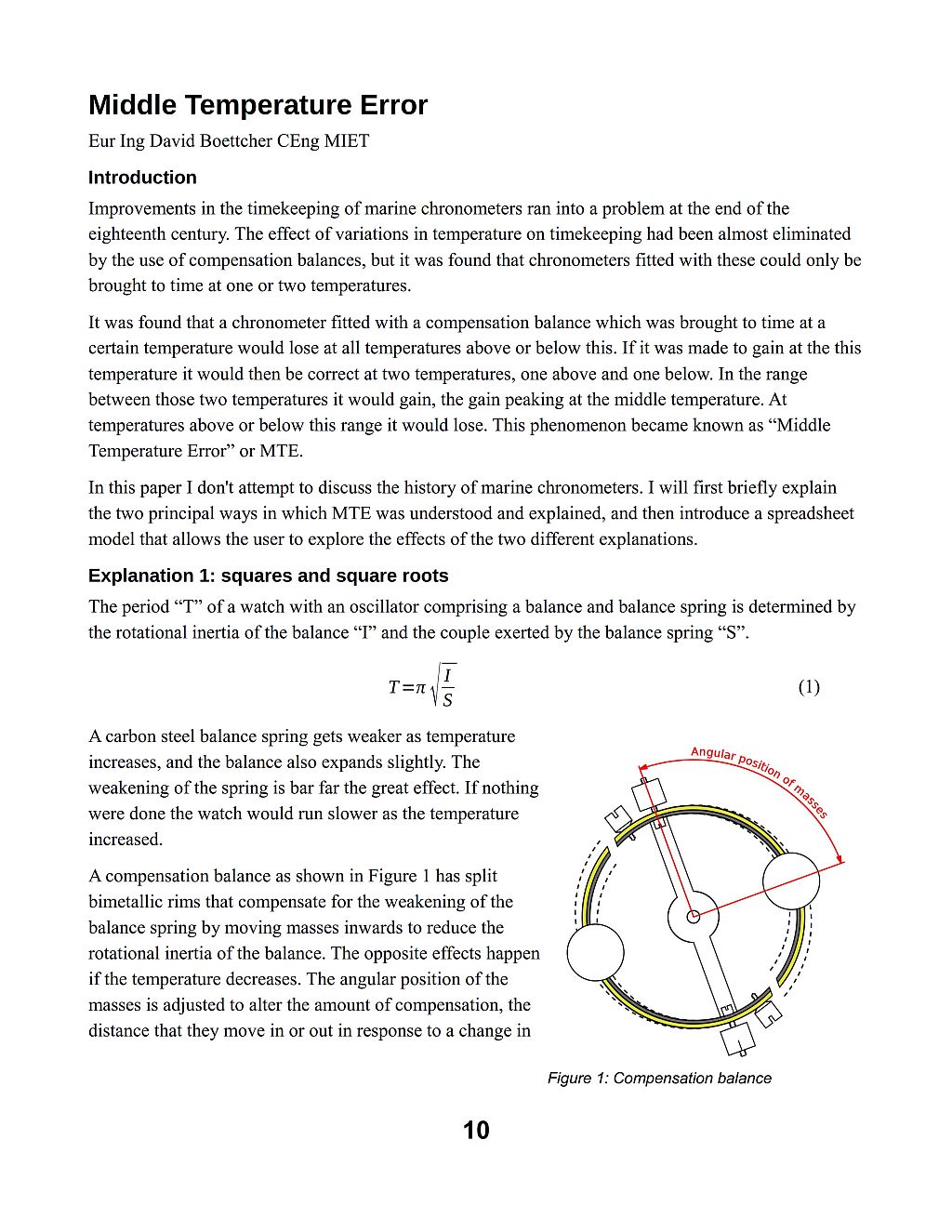 To minimise the total error over the range of temperatures a marine chronometer was expected to encounter, the timing was adjusted so that it was fast at a "middle" temperature and correct at two temperatures either side of this. This gaining rate at the middle temperature was called the "middle temperature error". Because the effect only became noticeable once the primary source of error, the change in the elasticity of the balance spring with temperature, had been compensated, it was also sometimes called "secondary error".

The cause of middle temperature error has been much debated over the years since it was first observed. Qualitative explanations were advanced claiming that it was due to the effects of square or square root terms in the equation for the period of a balance. Although these explanations were logical and true, it has now been shown that the magnitude of the error they cause is much smaller than the errors observed in practice. This is briefly outlined further down on this page and if you are not already familiar with recent discussions around middle temperature error I suggest that you read that short summary first.

The true cause of middle temperature error is discussed in more detail in an article published in the February 2017 edition of the Horological Science Newsletter (HSN). The article introduces a spreadsheet model that demonstrates the magnitudes of the different effects that contribute to middle temperature error. The HSN newsletter is published by NAWCC Chapter #161. The interest of Chapter #161 is the study and distribution of information about the science of horology. Chapter membership is available to members of the NAWCC. The editor of HSN, Bob Holmström has kindly agreed that my article and accompanying spreadsheet can also be downloaded from this web page.

The spreadsheet that accompanies the article allows you to interactively explore the effects of temperature on a balance and balance spring. I strongly recommend that you download and try it. You don't need to do any spreadsheet programming, it is already set up. You just alter the values of the thermal coefficients of expansion and elasticity, and charts built into the spreadsheet immediately show you the effect on timekeeping. It's really simple so give it a go, and if you have any problems just drop me an email. The spreadsheet is in Excel format. If you don't have the Microsoft Office Excel spreadsheet software, then Libre Office contains an excellent alternative that can open Excel format spreadsheets and is available absolutely free from Download Libre Office.

Spreadsheets were created to simplify and automate business models originally created with chalk and blackboards. They are a powerful tool, easy to use and incredibly useful but, like all complicated tools, if you have never been shown how to use one they can be initially daunting. I have created a short introduction into how they work to get you going. Download it from this link: Spreadsheets – A Simple Introduction. NB: Updated to Rev. 2.0 on 28 November 2017.

The article and spreadsheet can be downloaded from these links: Article: MTE.pdf, Spreadsheet: MTE.xlsx.

An explanation for middle temperature error was developed by the Reverend George Fisher and published in The Nautical Magazine of 1842 under the name of E. J. Dent, of the chronometer makers Arnold & Dent. Fisher's name is not mentioned in Dent's article, most likely because Fisher had incurred the displeasure of the English chronometer industry by publishing a paper that suggested that the going of chronometers could be affected by magnetism in iron ships, which was wrong but potentially damaging to the chronometer industry, and Fisher probably decided to keep a low profile as a result. He continued to work on chronometers but didn't publish anything further about them.

The explanation published by Dent was based on the observation that the equation for the period of a balance controlled timepiece can be written as:

where mk2 is the moment of inertia of the balance, m being the mass and k the radius of gyration, and S represents the force or turning moment exerted by the balance spring. 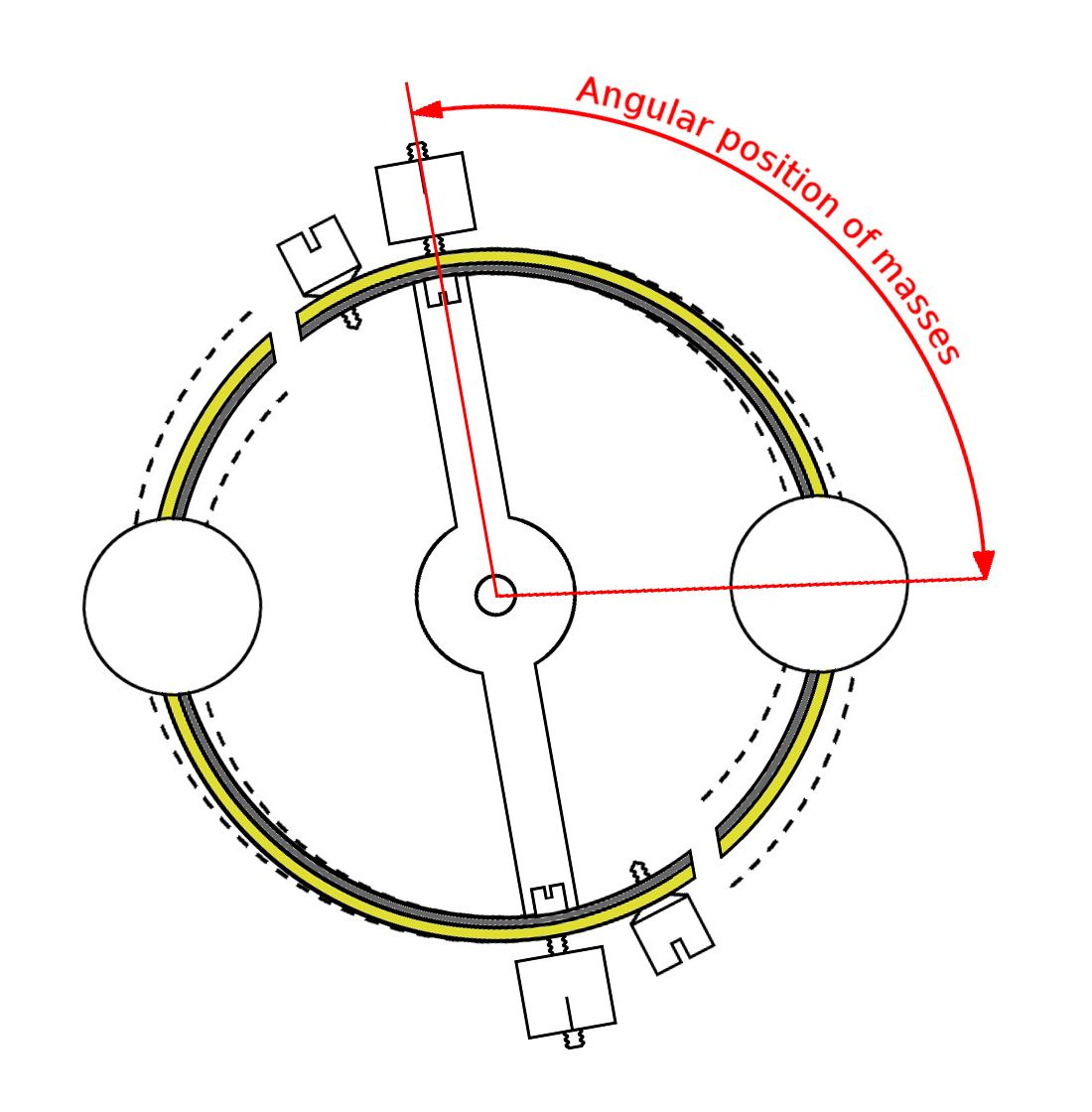 If the temperature increases, the elastic force exerted by the balance spring decreases and the bimetallic sections of the balance move the compensation masses inwards to reduce the rotational inertia. The opposite happens for a fall in temperature, the bimetallic secions move the compensation masses outwards. The masses move only a very small distance and it seemed likely that they moved proportionally in response to temperature changes. Observations by Dent had suggested that the elasticity of the balance spring varied linearly with temperature, or very nearly so. In fact, Dent's data does show a non-linear effect in the spring tension, but for the purposes of explanation he assumed that it was negligible.

If the compensation was to be perfect, then from the equation above it is clear that the ratio of \(k^2\) to \(S\) must be constant. But if the masses are moved proportionally to a change in temperature, then the change in \(k\) will be linear and \(k^2\) will be a quadratic curve. Fisher realised that the curve produced by plotting \(k^2\) against temperature on a chart could only intersect with a straight line representing a linear \(S\) term at either one or, at most, two points. This is the explanation related by Commander Gould in "The Marine Chronometer" and drawn in a figure as a series of "I" curves representing the moment of inertia against a straight "S" line representing the spring term.

The Fisher / Dent explanation considers the relationship of the balance's moment of inertia to spring force within the encompassing square root sign of the equation for period. However, the encompassing square root cannot be ignored. When it is taken into account, it is evident that the period is proportional to the square root of \(k^2\); that is, the period is directly proportional to \(k\). It is clear from this that whatever is the source of the non-linearity that gives rise to middle temperature error, it is not the square in the inertia term.

An alternative way of visualising the effect is to rewrite the equation for period as:

If both k and S vary linearly with temperature, as was supposed, then a plot of k against temperature on a chart would be a straight line, but the plot of S would be a quadratic curve due to the square root. The k line could only intersect with the curve of the S term at either one or, at most, two points. This is the explanation related by A. L. Rawlings in "The Science of Clocks and Watches".

Rawlings' "square root" explanation is rational, logical and correct, and it held sway as the only explanation for middle temperature error for many years. However, although the reasoning is correct, the magnitude of the middle temperature error produced by this effect is much smaller than that actually observed. There must be another, more significant, factor at work.

The shortcoming in the square root explanation was noticed by Peter Baxandall during the updating of Rawlings' classic work by the BHI, and subsequently investigated by Philip Woodward in a paper published in the Horological Journal of April 2011. Woodward showed that the middle temperature error produced by the square root effect alone was around one tenth of a second per day, only a small fraction of observed values.

The reason that the square root effect is so small is because all of the coefficients are close to unity, where unexpected things happen to square roots. Lets say we are interested in a temperature range of 30°C; that's +/- 15°C around the middle temperature. The variation in the elastic modulus is given by 1+αt, where α (alpha) is the thermoelastic coefficient and t is the temperature change. Using Rawlings' figure of -207 parts per million per °C for the thermoelastic coefficient for S (he calls it Q), at the extremes of temperature +/- 15°C the change in the stiffness of a balance spring will be 0.9969 at +15°C and 1.0031 at -15°C.

Let's just look at the second of these figures for a moment. We want the square root of 1.0031 to use on the bottom of the equation for period. Rather than reaching for a calculator, lets look at the Taylor series expansion:

Here the value of 1.0031 can be substituted for 1+x, with x = 0.0031. The third term in the series, x squared over two, will be very small and it, along with all subsequent terms, can be neglected. So when x is small like in this case, the square root of 1-x can, with a high degree of accuracy, be represented by: 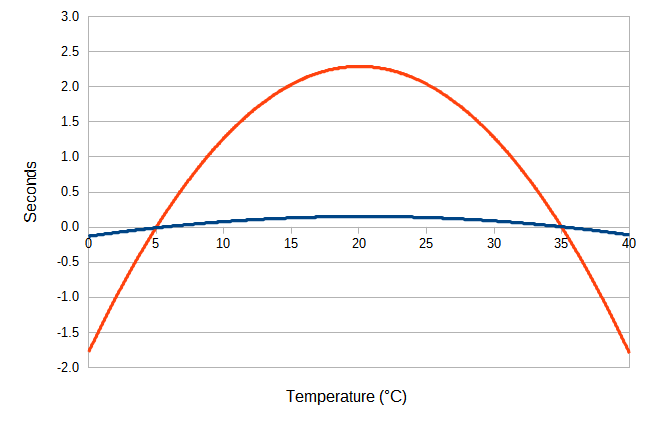 It is immediately apparent that if the square root of the thermoelastic changes between +/- 15°C can be represented to a high degree of accuracy by the linear term on the right of the equals sign, the relationship between temperature and the stiffness of the spring is, also to a high degree of accuracy, linear. There is no doubt that the square root does cause some non-linear effect, but it is tiny. A cause for vast bulk of the middle temperature error must be sought in a different explanation.

In the late nineteenth century, Dr Guillaume realised that middle temperature error, which he called "secondary error" or "Dent's error", is due to the fact that the elasticity of the balance spring does not vary linearly with temperature but has a curvature. It is not clear that Guillaume ascribed any of the middle temperature error to the square root effect, he doesn't mention it in his writings. From his work on changes in the dimensions and elastic moduli of nickel steels with changes in temperature he would have known that any such effect would be small, it appears that he probably thought it would be negligible. Dr Guillaume's explanation of the effect can be found at The Guillaume "integral" balance.

There is more about temperature effects in watches, compensation balances, and special metals that were developed for the balance spring, on my page about Temperature Effects in Watches.