This blog entry is about an inquiry I received by email asking for help reading a set of English hallmarks in a watch case. However, the name on the movement puzzled both my correspondent and me, so I spent a little time working it out; I think it makes an interesting story, I hope you do too. 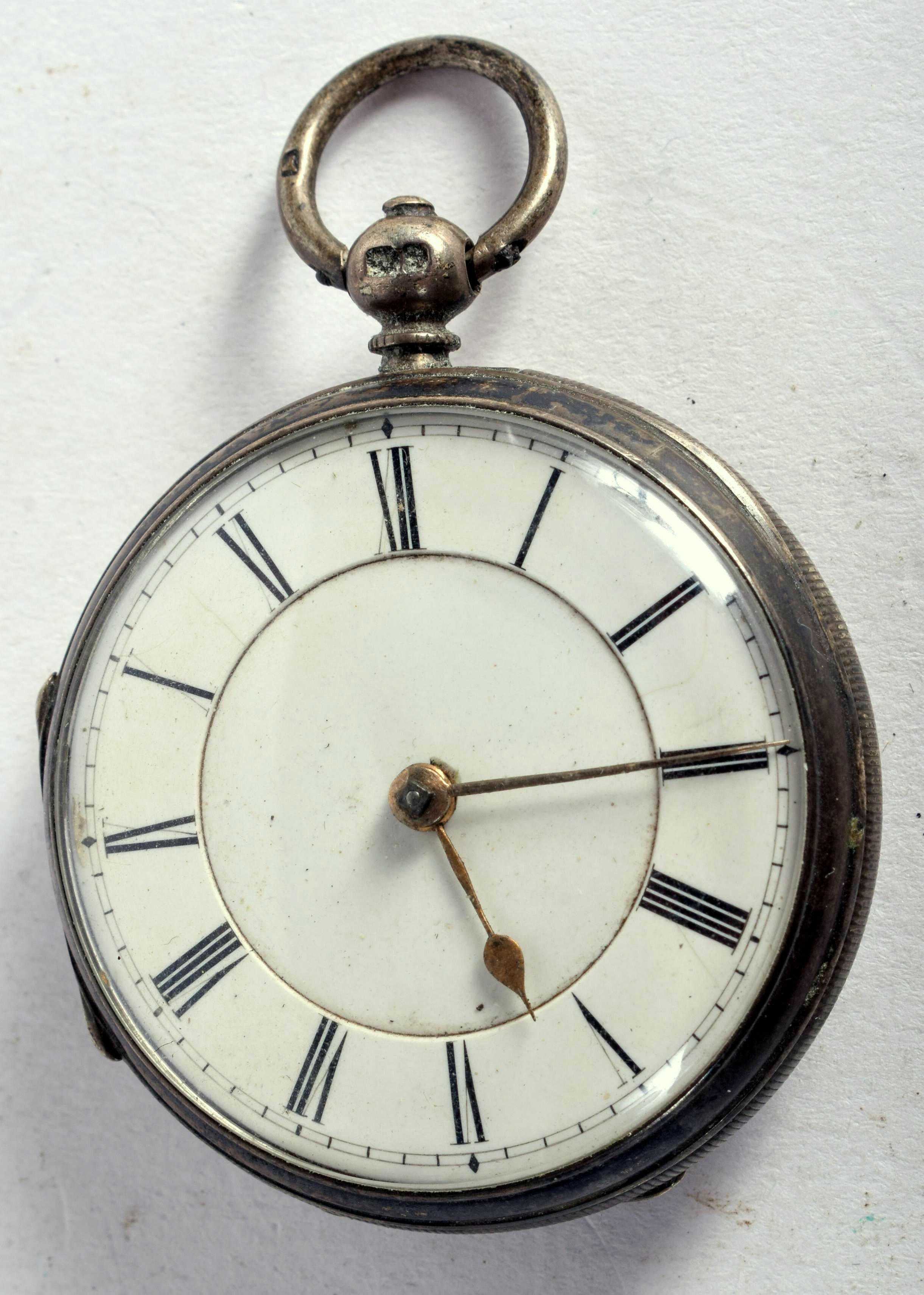 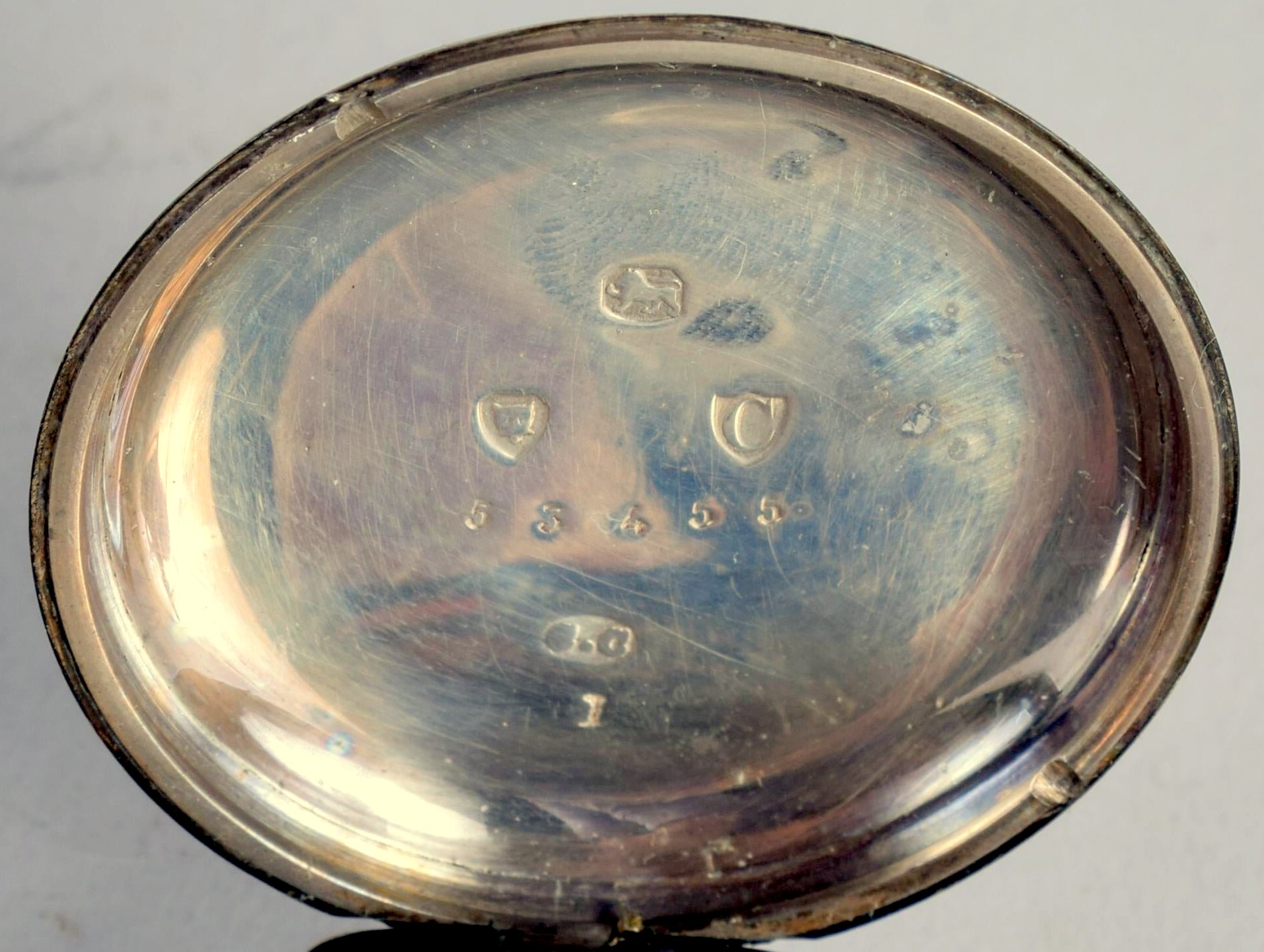 The watch is a key wound and set pocket watch in a silver case with a white enamel dial and gold spade hands. The watch is a plain but quite handsome piece; the case is “as found”; tarnished and rather dirty but will clean up nicely.

Although key winding and setting, where a key is inserted into the back to wind it and applied to a square boss on the minute hand to set the time, was rather old fashioned by the time this watch was made, it has the benefit of being extremely simple with very little that can go wrong, unlike “keyless” stem wound and set movements, where wear in the keyless mechanism has spelled doom for many watches. With a little care and attention a watch like this will still be working in a hundred years time and more, which is more that can be said for many things manufactured today.

If you gave a an English pocket watch like this and are puzzled about how to open it to see the movement, an explanation of the case and how to access the movement can be found at English Lever Cases.

The case has London Assay Office (leopard's head) hallmarks for sterling silver (walking lion passant), the date letter is the "C" of the hallmarking year from June 1878 to May 1879 - remember that date letter punches were used over two calendar years. Note also that an assay office mark shows where an item was hallmarked, which is not necessarily where it was made. If you want more information about how to read a British hallmark, have a look at British Hallmarks: A Quick Guide.

The sponsor's mark “C.C” in cameo within an oval surround was entered by Charles Cooke of 28 Thomas Street, The Butts, Coventry. Cooke is recorded as a watch case maker working in Coventry at this time, so the watch was certainly made in Coventry.

The case carries a punched serial number 53455 which is also engraved on the movement. Matching numbers like this on case and movement show that they belong together; the case was made to fit the movement and they have always been together. The serial number was applied to the case and movement by the unknown Coventry watchmaker, unfortunately we will probably never know who that was.

The pendant is the tube type piece the projecting from the case above the 12 that carries the bow, the ring to which a chain or strap can be attached for safety. This carries a “J.J” punch mark, which is the pendant maker's mark. Pendants were bought in by case makers from specialist makers who made them by casting, which was best done in a separate workshop. Although there are a number of similar J.J marks listed, none of them are listed as pendant makers. This is most likely because it was Cooke who was responsible for submitting the case to the London Assay Office and therefore it was not necessary for the pendant maker's mark to be also entered. The marks on the other side of the pendant are “part hallmarks” and should be the lion passant and the same date letter as the main part of the case.

The bow would originally also have been hallmarked but, like the vast majority of bows, this one is not the original, which has been replaced due to wear over the years caused by the clip of a chain or strap attached to it. See the description of my Longines pocket watch for more details about this. 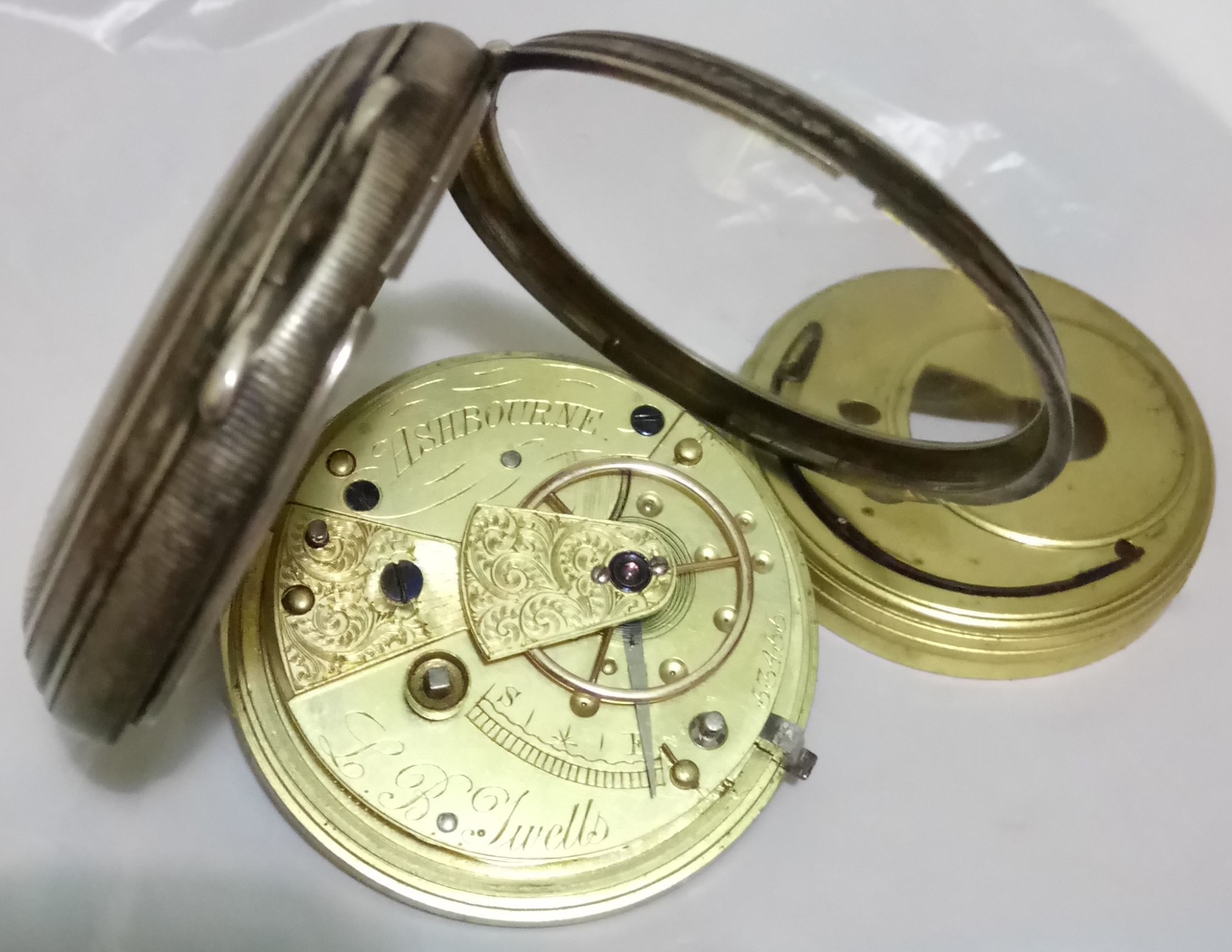 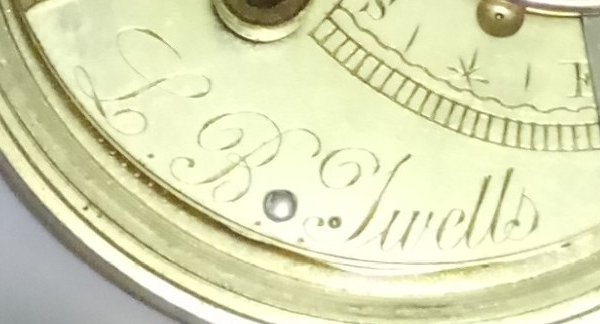 The movement swings out from the front of the case like the movements of most English Lever watches, of which this is one. One the cap is removed by sliding the blue steel semi-circular catch the movement can be seen. The winding square is on the end of the arbor of the fusee. The balance is made of gold and has a ruby cut diamond end stone, and the plates are frosted and gold plated. All very English features. The train pivots are not jewelled; the little dishes are oil sinks. The two close to each other just outside the balance rim which look like oil sinks are not, they are the banking pins for the lever.

This is where the fun and games started. The movement is clearly marked “Ashbourne” on the plate above the mainspring barrel, a pretty little market town only a few miles from where I live. It's a place I like to go for a look in the antique shops and to have some lunch, which is perhaps partly what caught my attention. But the name is the tricky part. It looks like “L.B. Jwells” but that doesn't seem very plausible.

The name engraved onto an English watch like this is almost always the name of the owner of the shop who retailed the watch. But whose name is it? I picked up a copy Brian Loomes' Watchmakers & Clockmakers of the World which, despite its title, list many watch and clock retailers. The “wells” part of the name is clear enough, but what could the first letter be - an “S” for Swells? Some letters, A, B, C, etc. were easy to discount, but I worked through all the possible ones and there was no one listed as a retailer in Ashbourne.

The next step was to look in trade directories of the time such as Kelly's and Pigot's. The University of Leicester has put online a collection of nearly 700 Trade and Local Directories for England and Wales from the 1760s to the 1910s, which is a fantastic resource. I quickly located four that covered Derbyshire over the relevant period, and the second one for 1871 listed trades people in Ashbourne. Because at the time it was quite a small town, there were only about 8 pages. After reading carefully through lists of drapers, coal merchants, brewers, etc. looking for a six letter name ending ...wells, on the sixth page I discovered this entry:

Mystery solved! knowing that the family name was Twells, Google quickly revealed that the full name was Louis Bosworth Twells (1829-1885). There is some biographical information about Twells at Derbyshire Photographers' Profiles.

The trade directory entry shows that Twells turned his hand to a number of different ways of generating an income in his large show rooms (shop) on Church Street in Ashbourne. Jeweller and silversmith were prestige titles although, in common with many adopting these titles, Twells would not have actually made any jewellery or silverware. In reality he probably made more money from the general fancy goods, glass, china earthenware and sponges, everyday necessities for the people of the town and surrounding area which are still purveyed in many small town high street shops. 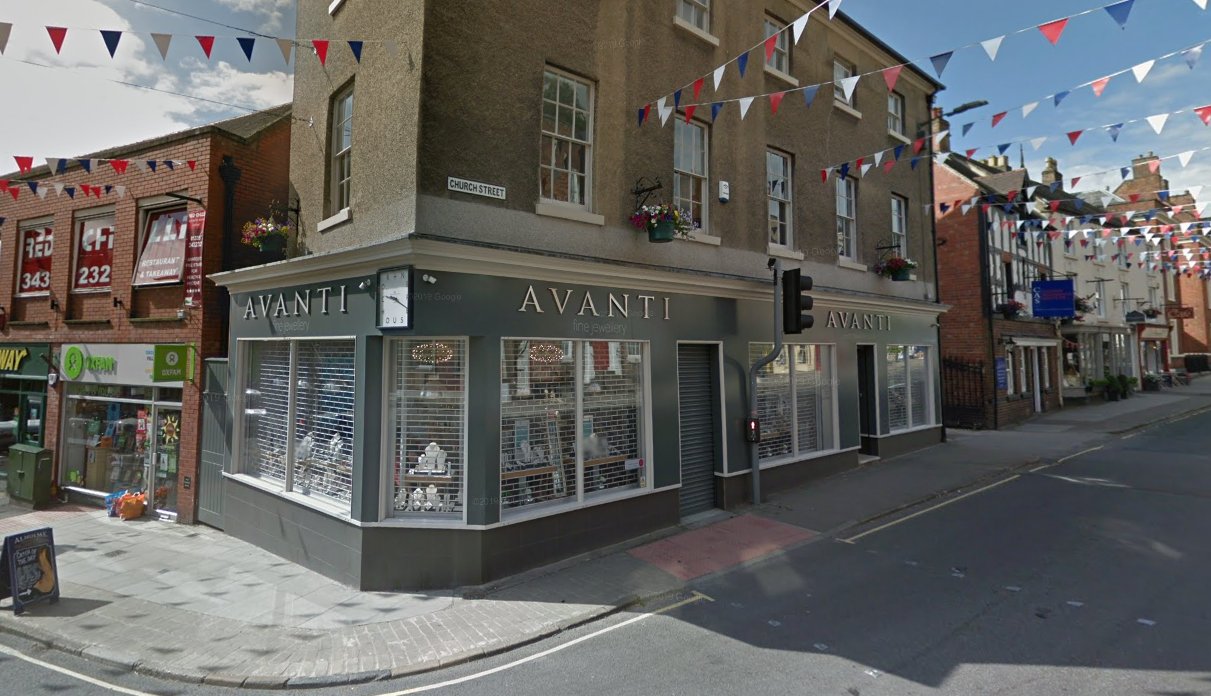 The additional crafts of hair cutter and perfumer are less usual in such a shop, but hair cutting is repeated in census entries and must have been a significant source of income. The 1851 census shows Louis visiting an aunt in London and records his age as 21 and trade as a “perfumer”. The 1861 census lists “hair cutter & jeweller”, the 1871 census “jeweller & silversmith” and the 1881 census as “hair cutter & jeweller”. This was the last census in which Louis appeared, but after his death in 1885 his widow Theresa and son, also named Louis B. Twells, continued to operate the business until 1903.

The 1871 census shows Louis Twells and living at 2 Church Street, which is on the corner of Church Street and Dig Street and is still a jewellers today, as shown in the recent image from Google Street Views. The Twells family must have been living at the time in the rooms above the shop.