Sometimes it is written that “early wristwatches were converted pocket watches”. This is not correct. Although it may seem logical to assume that the wristwatch started in this way, and then purpose made wristwatches came along as a later development, this reasoning is an assumption that is not based on evidence, and it is wrong.

The reality is that converted wristwatches did not precede purpose made wristwatches. The vast majority of such conversions were done during the Great War when the supply of wristwatches could not keep up with the demands of newly commissioned officers desperate to get to the front before the war was over.

The Practicality of Conversion

Before getting into the evidence of what actually happened, let's look at how easy it is to convert a pocket or fob watch into a satisfactory wristwatch. I say a “satisfactory wristwatch” because I mean a watch that customers would actually want to buy from a shop, to wear and show off to their friends, not something that looks like it's been hurriedly cobbled together under trying circumstances.

Wrist watches don't usually have a lid as a hunter watch does, because that would defeat the point of strapping the watch to a wrist – which was to make it easy to access and read without using both hands. If a wristwatch has a hunter lid, both hands are needed to read the time, the left to bring the watch into view, the right to open the lid. For this reason the vast majority of wristwatches are open faced.

Hunter wristwatches, and demi or half hunter wristwatches with a small window in the lid, are seen from the time of the Great War, obviously with the idea that the glass would be protected from knocks in the trenches, bullets and shrapnel. But these are few and far between, because they are awkward to read and quickly annoyed their users. Sometimes they are missing the hunter lid; I wonder how many were torn off by frustrated wearers? 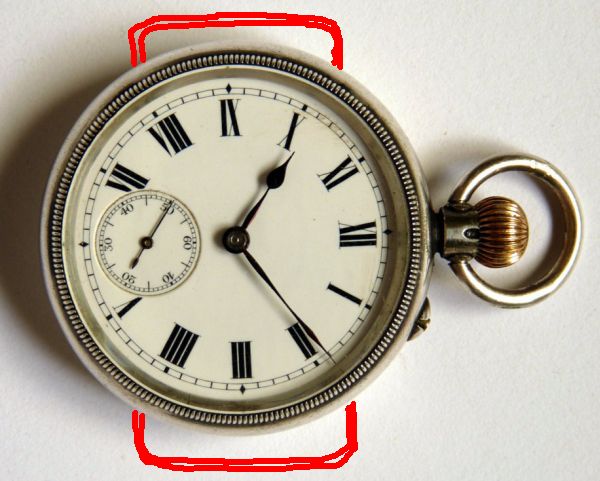 Would Soldering on Wire Lugs Really Make a Satisfactory Wristwatch?

Here is a picture of a small open faced Borgel pocket watch that I have rotated to bring the crown to 3 o'clock as if it were a wristwatch. A couple of problems with this as a wristwatch are immediately apparent.

Pocket watches converted to wristwatches usually show signs of all these problems. The 12 is often in the wrong place, or the dial feet have been cut off so that the dial can be rotated. The bow has been removed and the pendant and winding stem cut down, usually quite obviously. The position on the sub seconds display cannot be moved and would still appear at 9 o'clock, so often watches were chosen that have no seconds display. Nothing is done about the engraving on the back of the case, which is a dead give away that the watch left the factory as a pocket watch.

This sort of mucking about is just far too much trouble to be the way the first purpose made wristwatches were made. It was a very simple idea to attach two wire lugs to a case to take a strap or a bracelet, and ladies' wristwatches with bracelets had been made since the late 1880s. Purpose made men's wristwatches appeared much earlier than many people think, around 1900, but there was no demand for them from men. My earliest wristwatch with a verified date is an Early IWC Wristwatch made in 1906, with a Calibre 64 savonnette (hunter) movement put into a purpose made Lépine (open face) wristwatch case, the case ordered from Borgel in Geneva in September that year.

This IWC wristwatch, and other wristwatches from the pre-war period that were clearly made for men, show that purpose made men's wristwatch cases were readily available in the early 1900s. There was simply no need to convert pocket watches into unsatisfactory wristwatches. If a man wanted a wristwatch, he could just go out and buy one. And in fact, military officers did just that. Advertisements from the period mention that wristwatches were sold to automobilists, balloonists, horse riders and military men. The vast majority of civilian men didn't wear a wristwatch, because it simply wasn't seen as necessary or fashionable. But if a man did want a wristwatch, there were purpose made wristwatches that he could buy, and manufacturers keen to sell them. 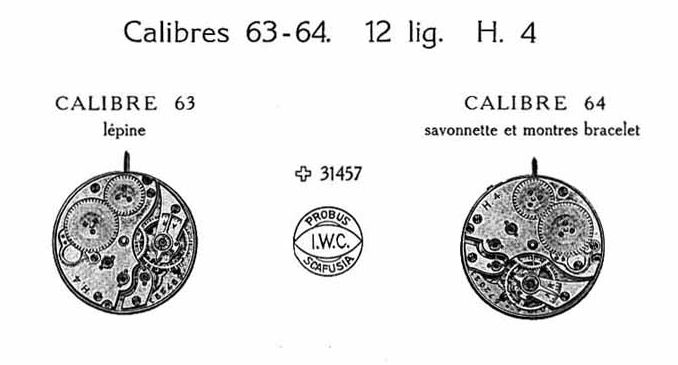 Although there are undoubtedly some wristwatches that were made by soldering wire lugs onto a small pocket watch, these are usually pretty obvious and not very well adapted to their new role. From their appearance it seems they were usually done by a local jeweller who was not used to the work; some of them even look like they might have been done by the village blacksmith.

The key to the successful wristwatch that many people fail to grasp was the paradoxical use of savonnette (hunter) movements in Lépine (open face) cases. For more details about the difference between Lépine and savonnette movements, see Savonnette vs. Lépine.

Instead of messing about converting pocket watches, a manufacturer wishing to make wristwatches would take small savonnette movements that they were already making and put them into purpose made open face cases with short pendants and lugs for a strap and, hey presto, wristwatches!

Was putting a small savonnette movement into an open face case that had been purpose made to take a wrist strap really a “pocket watch conversion”? No of course it wasn't.

This use of savonnette movements in open face cases, which for centuries had been called Lépine cases, gave rise to a new terminology. This is shown in the image here taken from an IWC catalogue of spares (fournitures) published in 1917. 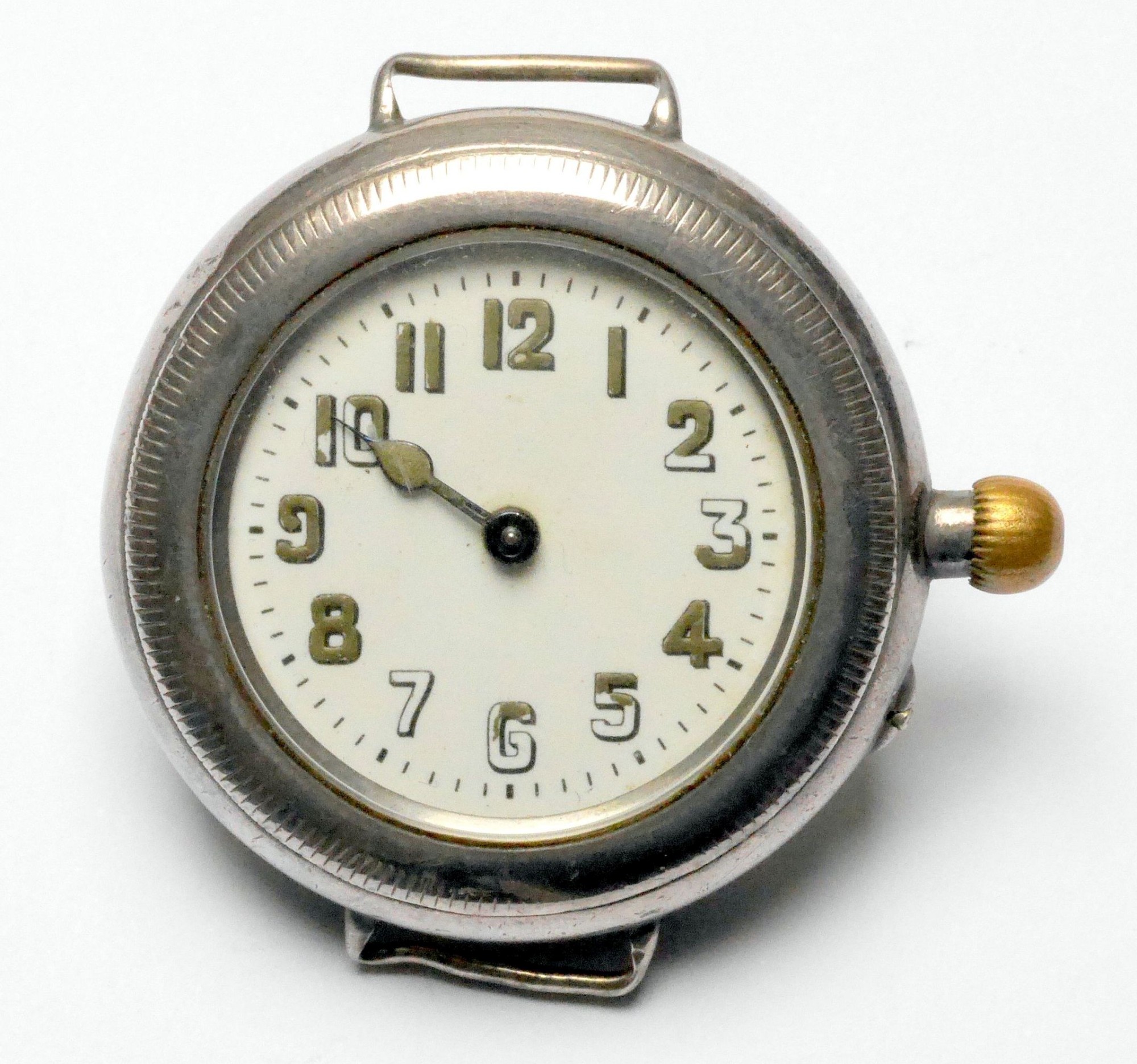 So when were the conversions of pocket watches into the converted wristwatches that one sees today actually carried out?

Available evidence indicates that these conversions were done during the early years of the Great War. Since the late nineteenth century an officer in the British Army had been expected to wear a wristwatch. During the Great War, as the army expanded, many new officers were commissioned, and each one used his “kit allowance” to purchase his kit for the front; uniform, sword, revolver, etc. - and a wristwatch.

At the start of the war there was such a demand from newly commissioned officers for wristwatches that the supply of new wristwatches couldn't keep up. At this time, fob watches were converted into wristwatches for officers determined to kit up and get to the front before the fighting was over, which in 1914 it was expected to be by Christmas.

I have the Longines wristwatch shown in the image here. It's a nice size for a man's wristwatch, 35 millimetres across the case, not including the wire lugs or the crown, and it has the skeleton numerals and poire squelette hands with radium luminous paint of a trench watch. It has a Longines calibre 13.67 Lépine movement with 18 jewels, and a silver Borgel screw case.

The Longines serial number of the watch is 2,241,923, which shows that the movement was made in 1909. The Borgel case has London Assay Office import hallmarks for sterling silver with the date letter “n” of 1908 to 1909 – remember that date letter punches were used over two calendar years. So the watch was made in circa 1909.

Longines records show that this wristwatch was sent to Baume & Co. in London on 12 March 1915. Why did this watch, which had been made in 1909, remain in Longines inventory until 1915, some six years later?

The answer lies in the sudden overwhelming demand for wristwatches from newly commissioned officers getting kitted out for the front in the Great War. The unusual features; fixed wire lugs, luminous dial, lack of seconds indication, show that this watch started life in 1909 as a small open face pendant or fob watch that was converted into a wristwatch at the Longines factory in 1915.

The Great War created a huge demand for wristwatches. Initially Longines was able to fill orders with purpose made wristwatches, but by 1915 demand was outstripping supply. Thirteen ligne open face fob watches were a suitable size for wristwatches, so fob watches like number 2,241,923 were drawn from stock and converted to wristwatches by removing the bow and cutting down the pendant, soldering wire lugs to the case and fitting a new luminous dial and hands. Because the movement is a Lépine, the small seconds on the new dial would have been at 9 o’clock, the arbor of the fourth wheel was shortened and the seconds indication omitted. This was not ideal, a small seconds indication was useful to show that the watch was working when it could not be heard ticking due to the noise of gunfire, but needs must and the demand for wristwatches was great.

This watch is clear evidence that conversions of pocket watches into wristwatches took place during the Great War due to the sudden overwhelming demand for wristwatches. Many conversions were performed by jewellers and are easily spotted. This conversion was more competently done at the Longines factory and is not so easy to spot, but Longines archives are an invaluable record that show what actually happened.