The section reproduced here is from my page about IWC - The International Watch Company. 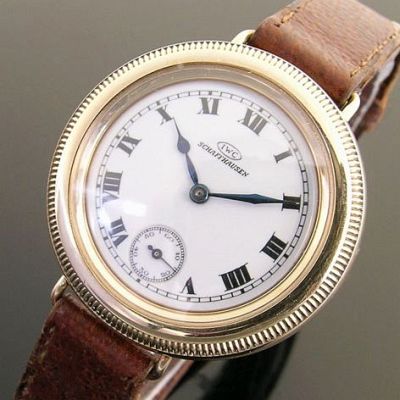 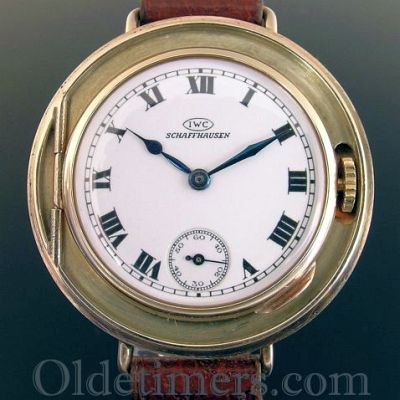 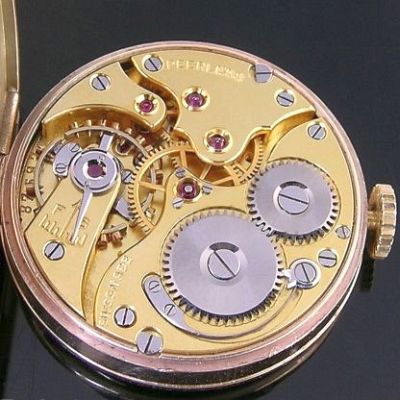 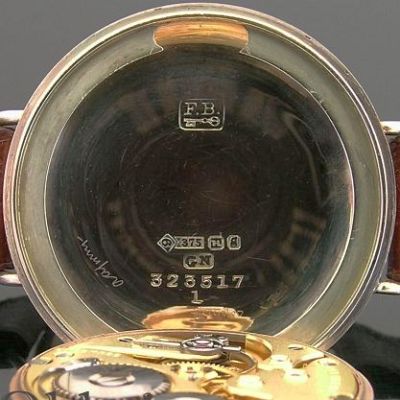 Images by kind permission of and © OldeTimers.com

The watch pictured here is an IWC hermetic wristwatch. It has an IWC calibre 76 movement in a 9 carat gold hermetic case manufactured by the Borgel company of Geneva. 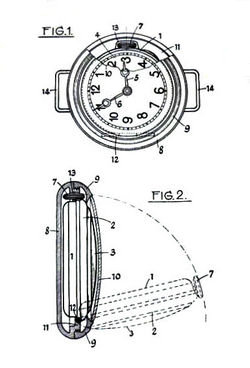 The watch case is a hermetic or double case. This was invented by Jean Finger, a watch case maker of Longeau, Berne, Switzerland, who was granted Swiss patent number CH 89276 in January 1921 for a " Montre à remontoire avec boitier protecteur" literally "a watch with a protective box".

The purpose of the design was to overcome the problem of sealing the case where the stem enters. Cases with screw backs and screw bezels that sealed the case joints against water had existed for a long time, but there was no fully satisfactory way of sealing the hole where the stem, which allowed the watch to be wound and set by the crown, entered the case. Jean Finger overcame this problem with a brutally simple solution. The fully cased watch, including its crown, was placed inside a second larger outer case which had no crown, and therefore no hole for the stem. The outer case had a screw on bezel that formed an hermetic seal, totally protecting the watch within.

Although this case achieved the desired waterproof effect, it had the major drawback that the bezel of the outer case had to be unscrewed every day so that the watch could be wound. Once the bezel was unscrewed, the movement flipped out on a hinge to allow the watch mainspring to be wound, and the hands to be set if necessary. Apart from being a nuisance to the owner, the case threads and the milling on the bezel wore quite quickly from this continuous use, so this was a far from ideal solution. However, despite the drawbacks a number of manufacturers including Zenith and Eberhard, as well as IWC, produced watches using this case design. Hans Wilsdorf of Rolex patented exactly the same case design in Britain in 1922, and the Rolex Hermetic was another watch made with this design of case. Wilsdorf doesn't mention Jean Finger in his application, so the exact ownership of the patent is something of a mystery. An identical design had also patented by Frederic Gruen in the USA in 1918, see Double Case "Hermetic" Watches.

The 10 ligne IWC calibre 75 and 76 movements were introduced in 1915. After the calibre 63 and 64 these were the second movements that IWC used for wristwatches. A 10 ligne movement is about 22.5mm diameter so from 1915 these would have been used in ladies wristwatches, until the fashion for smaller men's wristwatches of around 30mm diameter arose in the late 1920s and through the 1930s. The calibre 76 savonnette movement used in this watch is the perfect size for a watch with a hermetic case, because the movement and inner case have to fit within the outer case.

The trademark inside the case of the initials FB over a key of Geneva inside a rectangle is the mark of François Borgel of Geneva. In 1891 Borgel invented a damp and dust proof screw case by which he and the Borgel company are best known. François Borgel died in 1912 and the Borgel company was run by his daughter Louisa until 1924 when she sold it to the Taubert family of Le Locle, who continued the business in Geneva. By 1924 the original screw case designed by François Borgel needed updating and the Tauberts experimented with several existing water resistant designs such as the hermetic before producing their own phenomenally successful waterproof Decagonal screw case and a remarkably effective cork seal for the stem. 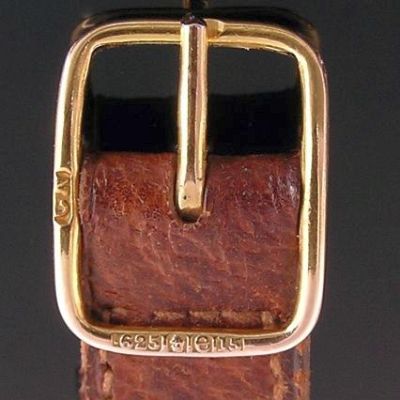 Image by kind permission of and © OldeTimers.com

The hallmarks are Glasgow import marks for 9 carat gold. The first mark is the 9/·375 standard mark for 9 carat gold ( 9 / 24 = 0.375 or 37.5% gold), the next is the prone opposed capital letters F that the Glasgow Assay Office used on imported items, and the date letter "g" shows that this watch was assayed and hallmarked at Glasgow in 1929 or 1930 - the Glasgow hallmarking year ran from 1 July to 30 June the next year.

The GN sponsor's mark was registered by George Alfred Nicolet of Stauffer, Son & Co. after the retirement of his father Charles Nicolet. This shows that the watch was imported by Stauffer & Co. in London, who had the sole British agency for IWC watches at the time. There is more about George Nicolet's mark on my page about sponsor's marks.

The IWC calibre 76 movement does not carry the usual mark of a "S & Co."under a crown inside an oval that most watches imported by Stauffer, whether from IWC or others, have; perhaps this was a sign of Stauffer's waning influence. By the mid 1930s another company was handling IWC imports to Britain.

The watch strap buckle is quite interesting. It is marked with Glasgow hallmarks for a British made item, not imported. The standard or fineness mark is ".625" for 15 carat gold, the town mark is the tree with a bird, a bell and a fish with a ring in its mouth, used by the Glasgow Assay Office on native British made items, and the date letter is "e" for 1927 to 1928. The sponsor's mark is the CN of Charles Nicolet, Alfred Nicolet's father.

Thanks to Crispin at OldeTimers.com for permission to use his pictures. If you are looking for a classic watch like this one, now you know where to head for.