IWC registered lots of patents over the years, but one that crops up regularly as a reference number on IWC movements is CH 31457. The sections reproduced here are from my page about IWC: the International Watch Co.. These are not intended to be a comprehensive list or guide to all of IWC's patents, just a few that are regularly referenced on old IWC movements. 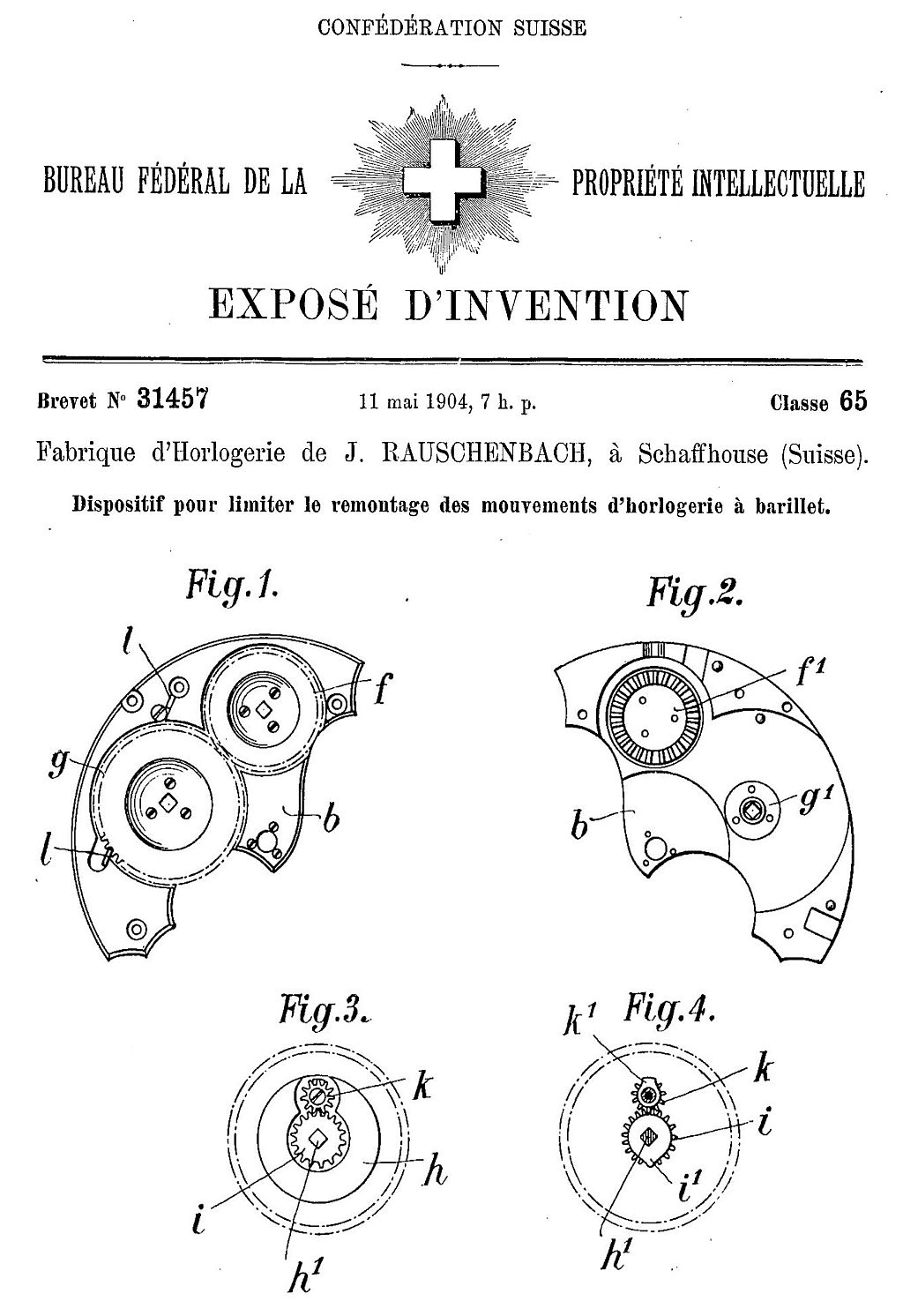 The number 31457 number is quite often seen on vintage on IWC movements, and it appears in the early Fournitures catalogues of parts. The clue to interpreting this number is the sign of the Swiss Federal Cross

which usually precedes the number when it is stamped or printed and signifies that it refers to a Swiss patent.

Patent CH 31457 was issued to "Fabrique d'Horlogerie de J Rauschenbach, à Schaffhouse" on 11 May 1904. Its title "Dispositif pour limiter le remontage des mouvements d'horlogerie à barillet" or "device for limiting the winding of a watch movement barrel" shows that it is about a type of "stop work" that limits the winding of the mainspring in its barrel.

The purpose of stop work is to stop the winding of the mainspring before it is fully wound, in order to eliminate the peak of force or torque that occurs if the spring is wound tight in its containing barrel. See the entry about stopwork for more details about this.

In a watch with a "going barrel" the mainspring that powers the watch is contained in a barrel which has teeth on its outside. The teeth engage with the centre wheel pinion and, when the spring is wound, they drive the watch train and ultimately the escapement. The mainspring is hooked at its outer end to the inner wall of the barrel, its inner end is hooked to the "barrel arbor", the shaft on which the barrel turns. To wind the mainspring you turn the barrel arbor, either directly with a key, or by the crown through the keyless mechanism. A ratchet allows the arbor to turn only in one direction and prevents the spring unwinding. It is the operation of this ratchet that you feel as a series of little clicks if you turn the key or crown backwards when you are winding a watch.

The basic idea of stop work is to limit the number of turns of the barrel arbor so that it is stopped before the mainspring is fully wound. Looking at the figures from patent 31457 reproduced here you can see in Fig 3, which is a view looking down on the barrel h, that a small gear wheel i is attached to the barrel arbor h1 and engages with a smaller gear wheel k. The wheel k is free to turn with the wheel i on the barrel arbor as the watch is wound.

Fig 4 shows a view from the underside of the gear wheels shown in Fig 3. The two gear wheels i and k each have a disc, i1 and k1 respectively, attached to their underside. These discs each have a projection which, as the gears are turned during winding, will eventually come into contact, preventing the discs, and hence the gears, from turning any further, thus stopping the winding.

This is very similar in principle to the more usual Maltese cross or Geneva stop work, but is perhaps easier to make and, as the patent explains, it is also easy to vary the number of turns the barrel arbor can make by replacing the wheels i and k by ones with different numbers of teeth.

In their book about IWC (ISBN 3906500152, p97), Tölke and King refer to this patent as a "barrel-bridge winding wheel construction". This is not the principal purpose of the patent as the title and opening paragraph make clear; "L'objet de la présente invention est un dispositif pour limiter le remontage des mouvements d'horlogerie a barillet" (The object of the present invention is a device for limiting the winding of watch movement barrels). So why did Tölke and King refer to it as a barrel bridge construction? 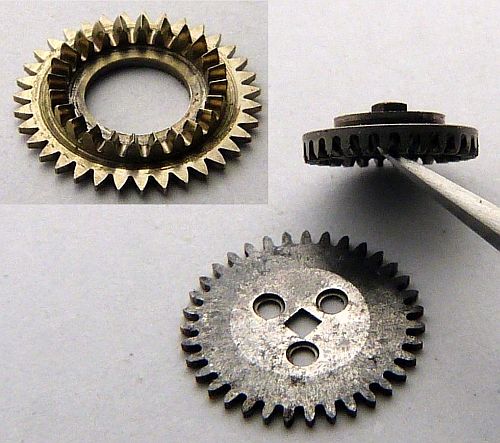 The answer probably lies in the figures in the patent. Figures 1 and 2 show the barrel bridge and the crown and ratchet wheels, and I imagine that Tölke and King, perhaps being German speakers and the patent being in French, or perhaps seeing only the figures and not the text of the patent, thought that figures 1 and 2 were the main object of the patent; a natural assumption to make. However, it is figures 3 and 4 that show the stopwork device that is stated in the title of the patent to be the principal purpose.

There is another curious anomaly about the stopwork device shown in the patent; it appears that this design of stopwork was never used by IWC. I have serviced a few IWC calibre 64 movements and when the stopwork was present it was the conventional "Maltese cross" design. Owen Gilchrist tell me that he has serviced over 50 IWC pocket watch movements and again the stopwork on those is of the Maltese cross type. It appears that IWC might have designed the geared stopwork shown in the patent simply to secure the patent so that they could stamp the number onto their movements. Alternatively, in practice it might have been found that the power of the mainspring was too much for the necessarily small gear teeth and sheared them off, so any movements that had been made with the design shown in the patent were altered to Maltese cross type stopwork. If you ever see an IWC movement with geared stopwork as shown in patent 31457, please do let me know.

Figures 1 and 2 of the patent show unusual "two part" crown and ratchet wheels. The usual form of crown wheel with face teeth is shown in the photograph here in the top left hand corner. This is a non-IWC part. It is made in one piece with teeth on its lower face that are driven by the winding pinion, and radial teeth on its edge that drive the ratchet wheel, and is secured in place by a screw into the barrel bridge. This type of crown wheel with face teeth that engage with the winding pinion turned by the stem is a better design than the type where the winding pinion engages with the radial teeth on the periphery of the crown wheel.

The IWC two part crown wheel, shown below and to the right, has a wheel with radial teeth that sits on top of the barrel bridge, and a second wheel with "face teeth" that is located below the barrel bridge and which engages with the teeth of the winding pinion on the stem. There is a square boss on the lower part that enters a square hole in the upper wheel, and two parts are fixed together with three screws.

The ratchet wheel in the patent is similarly made in two parts, a wheel that sits on top of the bridge and a smaller bush that is located below the bridge, again the two parts are held together with three screws. The bush has a central hole through which the barrel arbor passes and engages with a square hole in the ratchet wheel. This probably explains the reason for the square boss on the crown part of the crown wheel. The three screws would be adequate to couple the crown and wheel part of the crown wheel and the square coupling is not needed, but without it the two wheels would look different and so it is most likely there for purely aesthetic reasons. An alternative design would have been to make the boss below the ratchet wheel with a square rather than round hole for the barrel arbor, and then both the crown wheel and ratchet wheel could have been made without centre holes, which would have looked neater.

This unusual design of the crown and ratchet wheels is described in the patent and in the "claims", the features that are claimed as part of the patent, as claim 2 and 3. But the purpose of this part of the design is not described. Patents are granted to protect inventions, novel solutions to technical problems, and this simple description of a design without explaining how it solved a problem would not be acceptable in a patent today.

The crown and ratchet wheel are not components that normally cause or suffer problems or a wear, and they do not need to be made like this in order for the stopwork to function, so the purpose of making them in two parts is rather a mystery. 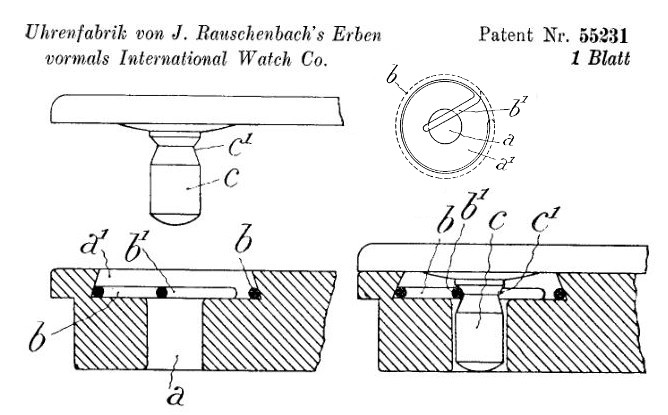 refers to a patent granted to Uhrenfabrik von J Rauschenbach on 16 July 1912 for a "Zifferblattbefestigungsvorrichtung"; a "dial fixture device" or "dial fastener".

The fastening of enamel dials to movements was always a problem. Enamel dials were made by fusing powdered coloured glass to a thin copper plate. The copper plate was covered with powdered glass which was melted and fused into a thin glassy layer by heat at about 800 degrees centigrade. Any slight bending of the dial plate caused the thin enamel coating to crack.

Enamel dials were made with small copper pegs called "dial feet" projecting from the back surface and which were used to hold the dial to the movement. This was usually done with screws. either screwing radially into the plate and into the side of the dial feet, or with partial skirts that grabbed the dial foot as the screw was turned. The problem with both of these methods was that they could bend the dial feet where they attached to the dial plate, causing a crack to appear on the opposite, visible, surface. 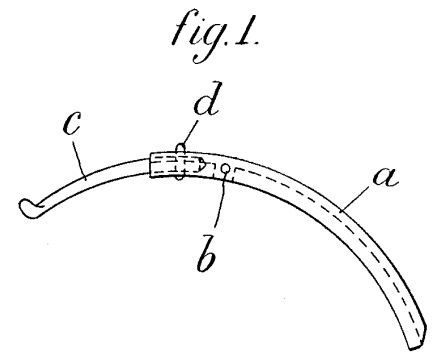 IWC was granted on 25 November 1912 Swiss patent CH 62178 for a "Gehäusefeder für Uhren" i.e. "house" or case spring for watches. This was a spring used in savonnette or hunter watch cases to spring open the front lid when a button was pressed. The patent notes that these springs are very subject to breakage, and that the conventional one piece spring is difficult to replace.

The IWC patent is for a spring with a separate holder. The figure here from the patent shows the idea. The holder "a" is fitted to the case with screw "b" in the same way as the shank of a normal one piece case spring, but it does not need to be made of spring steel and can be made of steel, brass or another metal. The reason for making this part the same shape as the shank of a normal spring might have been so that older cases with a one-piece spring could be upgraded to the new design when they came in for a replacement spring. A spring blade "c" is fixed into this holder by a cross pin "d" and opens the case lid as usual. If the spring blade breaks, it is easy to draw out the pin, remove the broken blade, and fit a new one.