While I was hunting for a strap for my grandfather's Rolex wristwatch, I learned that watches like his, with narrow fixed wire lugs for attaching the strap to the case, were called trench watches due to their use in the trenches during the Great War. The narrow lugs of these watches meant that the usual men's straps that were available to me would not fit, which started a long and fruitless search and ultimately led to me having a strap custom made, replicating an original period design.

While I was searching for trench watch straps, I naturally found a lot of trench watches. The one in the images below caught my attention. I was already interested in the history Great War and this was an attractive looking watch, an original survivor from that period, so on a whim I bought it. That turned out to be the first step on a long and slippery slope . . . . 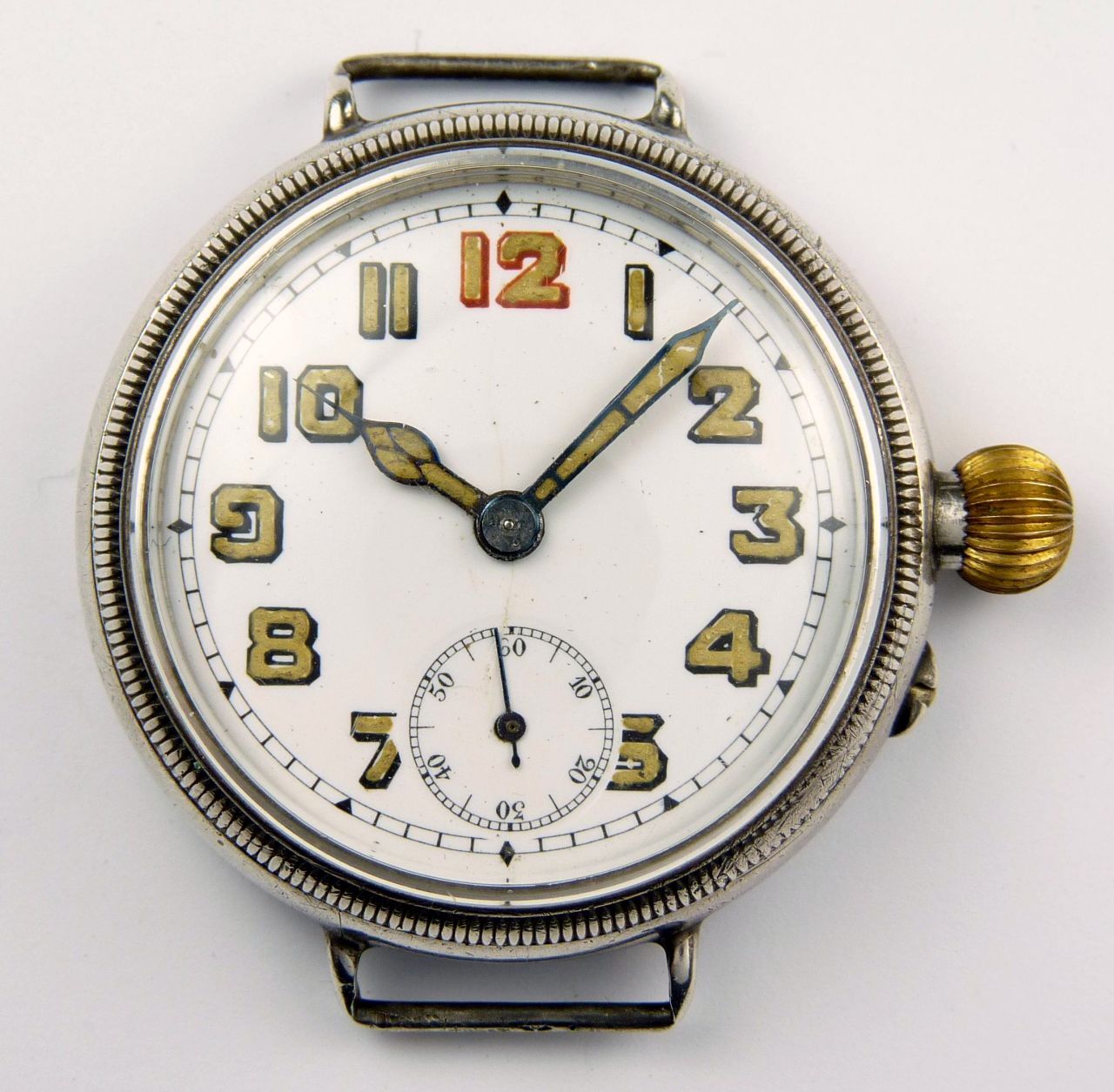 The watch was described as a “Borgel Trench Watch ”. This was my first encounter with a product of the Borgel watch case company of Geneva – it was not to be my last! NB: The g in Borgel is soft, like the g in massage.

The striking looking face, which is what caught my attention in the first place, is typical of a trench watch from the time of the Great War. The salient features are the skeleton numerals and hands, which originally carried radium luminous paint, which glowed strongly all the time so that the watch could be read in the dark. Original radium luminous paint no longer glows because the radiation burns out the glowing phosphor after a few years, but radium has a half life of about 1,600 years so after only 100 years or so, original radioluminescent paint is still pretty much as radioactive as when it was new. Radium gives off gamma radiation and radon gas, which need to be treated with caution. However, the original radium paint on the dial of this watch had been replaced with non-radioactive paint before I bought it. Whoever replaced the paint did a good job.

The dial is vitreous enamel, a type of glass that was fired at high temperature to create a glossy surface that is invulnerable to ageing or fading, which is why it still looks so good. Enamel dials can be put through an ultrasonic clean with no adverse effect. As is usual for the time there is no name on the dial or, if there was one, it was painted on and long since disappeared. Throughout the nineteenth and early twentieth centuries, British retailers did not allow foreign manufacturers to put their names on dials.

The crystal is a modern acrylic plastic replacement. Unbreakable glass, really celluloid, came into use for wristwatches during the Great War, instead of the fragile glass that was used for watch crystals before. I don't see this as unauthentic, original celluloid crystals are sometimes seen but most yellowed long ago to a point at which it was difficult to tell the time and were replaced in the course of service.

The watch case is 35mm diameter, which is a typical size for a trench watch and a man's wristwatch of the period. Some men's wristwatches were slightly smaller, but if anyone tries to tell you that a fancy wristwatch with fixed wire lugs of around 30 millimetres diameter or smaller is a man's watch, don't believe them. Ladies' wristwatches of this description were made from around 1890s; today unscrupulous or ignorant people try to pass them off as trench watches because they think they will get more money for them that way. 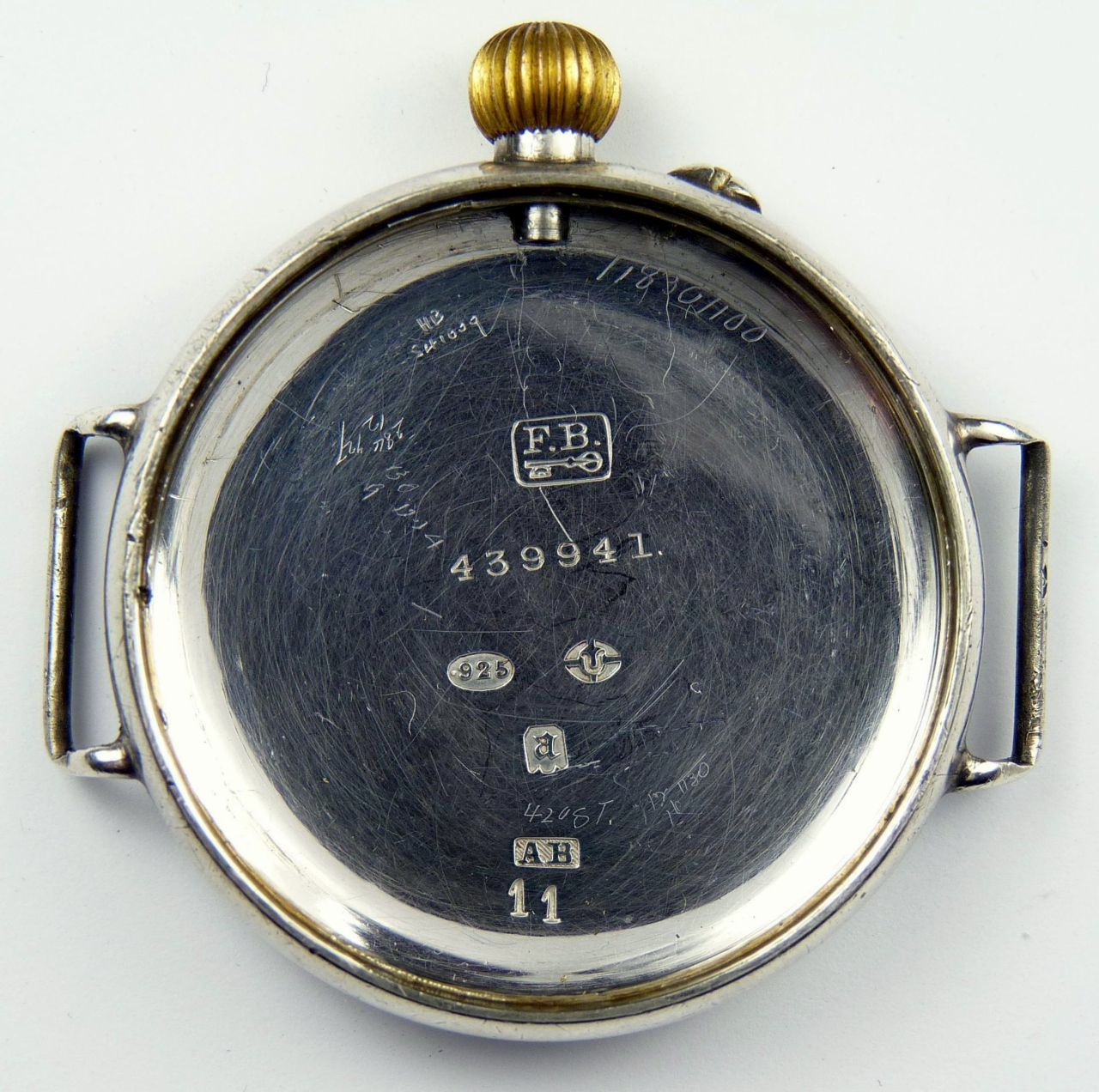 The inside of the case carries the trademark of the Borgel company, François Borgel's initials “FB” above a key, the symbol of the city of Geneva where Borgel had his watch case factory. François died in 1912 and running the company was taken over by his daughter Louisa, who was in charge when his case was made, and throughout the whole of the Great War, which is when demand for wristwatches exploded.

The case has London Assay Office (sign of Constellation Leo) import hallmarks for sterling silver (⋅925). The date letter is the Gothic “a” of 1916 to 1917 – remember that assay office date letter punches were used over two calendar years.

The sponsor's mark “AB’ in cameo on a cross hatched background within a rectangular shield was entered by Arthur Baume of Baume & Company. The first punch of this style was registered in Baume's name at the London Assay Office on 1 March 1907, and many other punches like this were subsequently registered.

The import hallmarks show that this case was made in Switzerland, but sent to England to be hallmarked after a British law requiring all imported gold and silver watch cases to be hallmarked in a British assay office came into force on 1 June 1907. An item has to be stamped with a sponsor's mark before it will be accepted at a British assay office for hallmarking, so Baume was acting as an “assay agent” for the Swiss case manufacturer, in this case Borgel. A sponsor's mark shows who takes responsibility for an item that is submitted for hallmarking. It does not show who actually made the item.

The hand scratched marks inside the case were made by watch repairers who serviced (cleaned and oiled) the movement. The marks would mean something to the repairer, but they used their own code so that marks couldn't be forged and a false claim made. All mechanical watches need to be cleaned and oiled every few years to keep them running properly, and to avoid wear and damage. 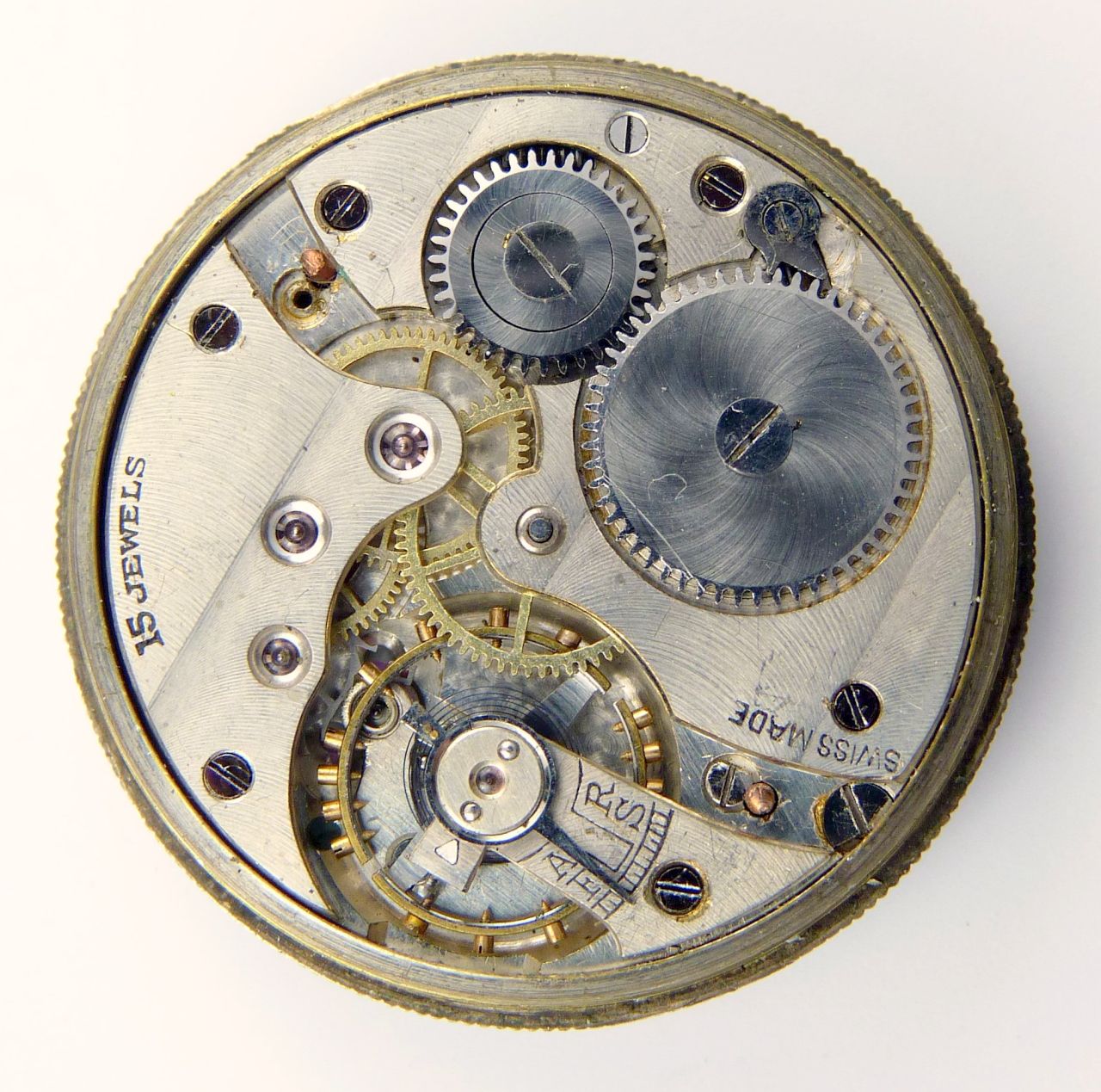 The watch movement was made by Fontainemelon, or to use the full name the Fabrique d'Horlogerie de Fontainemelon (FHF). This company was set up in 1793 to supply the Swiss watch industry with ébauches (bare movements) to reduce reliance on the supply of ébauches from France. 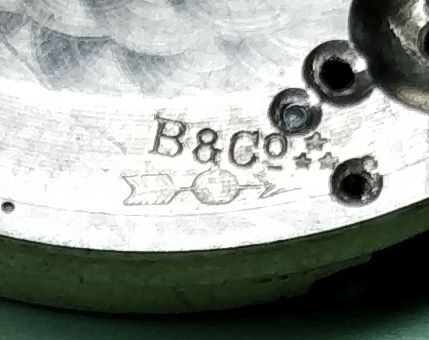 It is well known that Baume & Company were the British agents for Longines, so when I first realised that the movement was a Fontainemelon I thought that the watch might be a “marriage”, a movement and case that have been put together. However, Baume also imported watches with Fontainemelon movements, as is proven by the marks shown in the image here, which shows both the B&Co. with three stars and the Fontainemelon arrow-through-apple trademarks on a movement.

In 1909 a Baume watch factory was established in La Chaux-de-Fonds by the takeover of the firm Paul César Jeanneret. I think it is quite likely that this factory was assembling watches from Fontainemelon ébauches and other components, and that the watch shown on this page is one of its products, a genuine and original Baume watch rather than a marriage.

At the time this watch was made and sold, manufacturers were not allowed by British retailers to put their name on the dial on the dial. When that changed in the late 1920s, Watches made by the La Chaux-de-Fonds factory had “Baume’ on the dial. Despite what many vendors say these days, such watches have nothing to do with Baume & Mercier.

The movement is a good quality, with a jewelled straight line Swiss lever escapement, cut bimetallic compensation balance, a blued steel balance spring with a Breguet overcoil and 15 jewel bearings. The bridges, the flat plates that hold the train wheel bearings and the winding wheels, are made of brass, nickel plated for corrosion resistance. The wheels are also made of brass, gold plated for corrosion resistance.

The two copper coloured pegs visible in the gaps between the bridges are the dial feet. The one on the upper left is missing its retaining screw. The one bottom right is held in place by the screw next to it, which has a tapered skirt with a slot in it. When the screw is turned, the skirt digs in to the side of the soft dial foot, holding it and the dial in place.