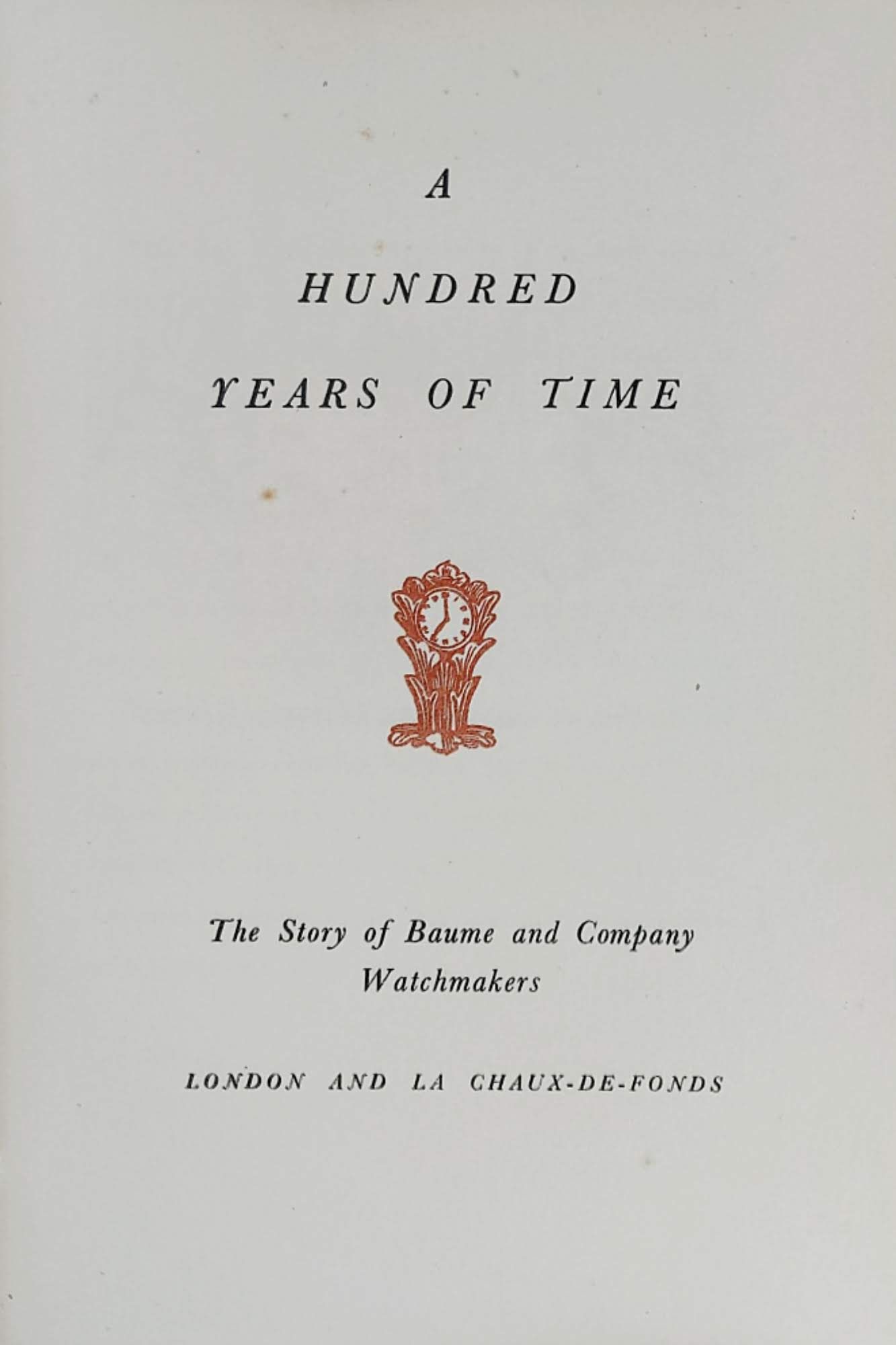 Baume: A Hundred Years of Time: Click to Enlarge.

Due to my interest in Longines I became interested in Baume & Company, which is often shortened to Baume & Co. For many years I wondered what was the connection between Baume & Company and Baume & Mercier. In 2018 I wrote to Baume & Mercier and was told “In 1918, the Swiss and English branches of Baume formally separated. Baume Brother's (Baume & Co.) was the London firm and the Swiss branch became Baume & Mercier. Unfortunately, the London Company ceased trading circa the 1950s/60s and we do not have any details of their company records.” This was interesting, but it didn't ring entirely true, so I investigated further.

A book called A Hundred Years of Time published by Baume & Co. in 1949 told a more plausible story. This was supplemented by material from Swiss and British trade papers, and a Court case, to reveal the true story. It turns out that in 1918 William Baume left the original Swiss company and started a completely new company in Geneva, initially under his own name, but then in 1919 in partnership with Paul Mercier. The Swiss company did not become Baume & Mercier as I was told, but in fact carried on manufacturing watches under the name Baume. There is therefore no continuity of manufacturing history between Baume & Mercier and either of the original Swiss or British Baume companies. The only tenuous connection is that William Baume once worked for the original Swiss company.

You will note that my telling of this story is not very sympathetic to Baume & Mercier. It could be that they really don't have any records, this is quite likely because of the lack of any connection between Baume & Mercier and the original Baume family company. In fact, it seems that there was significant hostility between the Baume family and William Baume. When I had uncovered details of this I wrote to Baume & Mercier to give them chance to put their side of the story. I didn't get a reply. I don't like people trying to pull the wool over my eyes, so here I document what I have found out about the real history of Baume & Mercier. The dates quoted are mainly from the book A Hundred Years of Time; dates claimed by Baume & Mercier are not consistent with contemporary evidence.

This section is from my page about Baume & Company.

In 1918 a serious dispute within the Baume family occurred. William Baume left the factory in La Chaux-de-Fonds which he had managed since 1915, severing all ties with the Baume family business. He was around 33 years old at the time. The two public notices reproduced here tell the subsequent story succinctly.

William Baume left La Chaux-de-Fonds and went to Geneva. The first notice reproduced here dated 22 November 1918 shows that he set up in business as a sole trader under his own name, W. Baume, at 2 Rue Céard, Geneva, for the fabrication, purchase and sale of horological items and jewellery.

In 1919 William Baume was joined in business by a friend, Paul Tcherednitchenko, a Ukrainian who had adopted the name Mercier. The notice dated 18 March 1919 shows that the company W. Baume was dissolved (radiée) and a new company named Baume & Tcherednitchenko dit Mercier was formed to take over the business with the same address. The purpose of the company was expanded to the fabrication, purchase and sales of horological items and jewellery, and all associated articles of those industries.

Note the spelling of Tcherednitchenko in the notice: I have seen it most frequently spelt online as Tchereditchenko, missing the first “n”, possibly due to the translation of a Russian name originally in the Cyrillic alphabet, or perhaps because too many people have copied from the same source.

Baume & Mercier claim a founding date of 1830. This must refers to the foundation of Baume Frères in Les Bois, although that was actually in 1834. The only link that connects Baume & Mercier to the original Baume family business is William Baume, who left that business to set up on his own while the rest of the family continued the original Baume Frères / Baume & Company business without him. There was no continuity of watchmaking between the two businesses. It's not exactly a strong claim to an unbroken record of watchmaking stretching back to the 1830s; they don't even get the dates right!

When founded in Geneva in 1919, Baume & Mercier was a completely new company. Rue Céard today is a pedestrianised area with high end shops, manufacturing would not took place there. It seems that Baume & Mercier began as a sales and marketing operation without any manufacturing capability. This is understandable, because William Baume and Paul Tcherednitchenko do not initially appear to have had the capital required to set up or buy a factory.

The rift between William Baume and the rest of the Baume family was so serious that when Baume & Mercier tried to export watches to Britain in the 1950s, legal action was taken against the importers by Baume & Company to prevent this use of the Baume name.

Baume & Company took legal action against A. H. Moore on the grounds that the use of the name Baume on watches branded “Baume & Mercier” was an infringement of their own UK registered Baume trade mark. The action was initially unsuccessful in the lower Court, but the Court of Appeal reversed the decision and granted an injunction restraining A. H. Moore from selling watches under any mark or name containing the word Baume.

The judges in the Appeal Court held that there was a real possibility that watches marked Baume & Mercier would be regarded as being the same as, or in some way associated with, Baume & Company's watches. Under the law, “no man was entitled, even by the honest use of his own name, so to describe or mark his goods as to represent that they were the goods of another person”. The sound common sense of this principle and judgement is evident today, because many people are confused about the relationship of Baume & Company and Baume & Mercier now that Baume & Company are no longer around and Baume & Mercier are coy about the matter.

Leave to appeal to the House of Lords was granted but was not taken up. The effect of this injunction was to stop the marketing and sale in Britain of Baume & Mercier watches until Baume & Co. either agreed to allow it, or became unable or unwilling to enforce the judgement. Baume & Mercier had to wait until the latter happened in the 1960s.

The earliest British advertisement for Baume & Mercier watches that I have seen is the one reproduced here dating to November 1968. The advert says that Baume & Mercier were “manufacturers of watches of outstanding quality & design since 1830 [sic]”. The address given is Baume & Mercier, Regent House, Frederick Street, Birmingham.

The date of 1830 given for the foundation of the company is an error, probably because Baume & Mercier didn't have good, or even any, historical records. There was no connection between Baume & Mercier of Geneva and the original Baume family company of Les Bois, London and La Chaux-de-Fonds, so archives of records would not have been passed between the two companies. In fact, as we have seen, relations remained acrimonious in the 1950s and 1960s. When I had uncovered some of the details and evidence reproduced here I wrote to Baume & Mercier, because I thought that they might be interested and want to put their side of the story. I didn't get a reply.