The Harrop business was established in London in 1836 by Edwin, George and Elijah Harrop as manufacturing goldsmiths and jewellers. Edwin George Harrop took over the business when his father, Edwin B. Harrop, died in 1894. The company was located at 99 to 119, Rosebery Avenue, London. 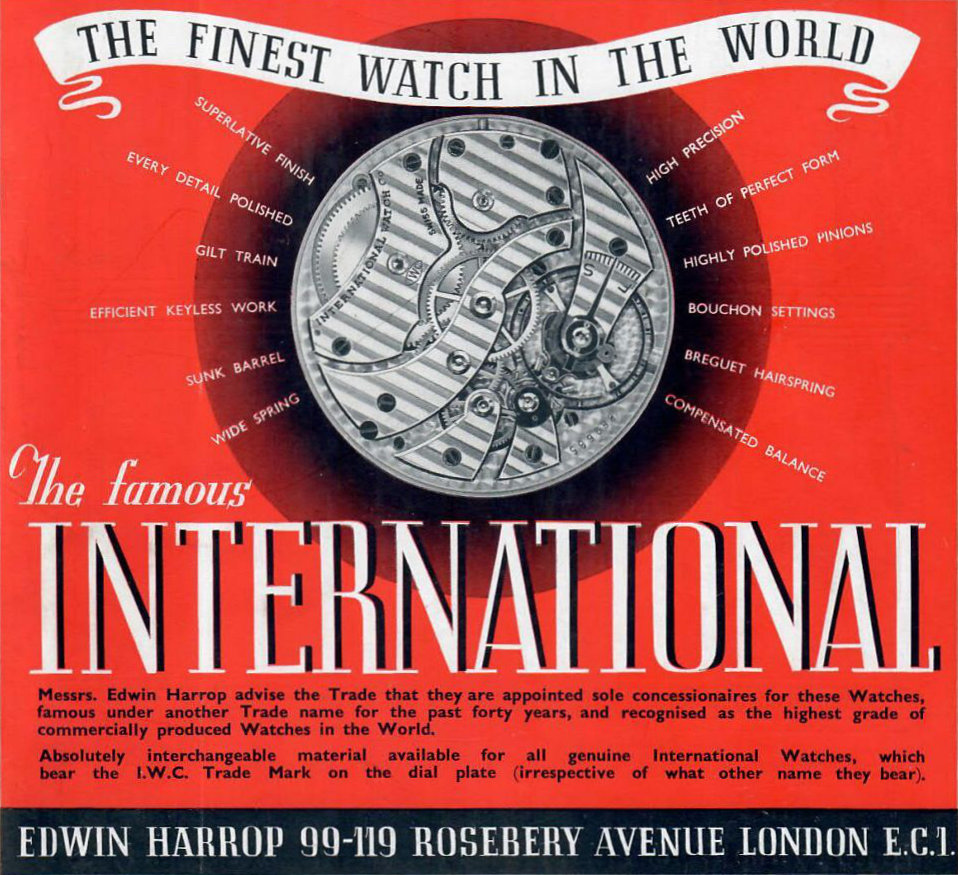 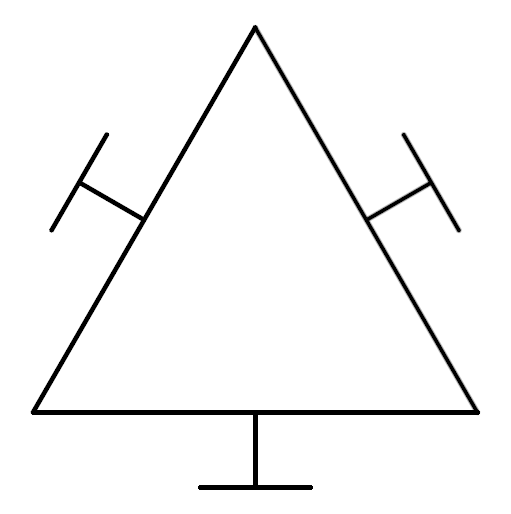 As a long established company of manufacturing goldsmiths and jewellers, Harrop created many original designs over the years, but their most successful product by a long way was an expanding metal bracelet for ladies' watches that was sold under the name “Britannic”.

The triangular trademark shown here was registered in 1878. The sponsor's mark of EH in cameo was entered at the London Assay Office in May 1911 by Edwin George Harrop so that items could be sent in to be assayed and hallmarked. The mark shown here was made by one of the several punches registered over the years by members of the Harrop family.

During the Great War, an increase in import duties meant that it became prohibitively expensive to import Swiss watches in gold cases, so many gold cases were made in England and fitted with Swiss movements, which were imported without cases for this purpose. In 1918 The London Watch Case Company, 157 Farringdon Road, London, was listed with E. G. Harrop and A. M. Lederman as directors.

The Horological Journal reported that at the British Industries Fair in 1921 Harrop showed “a very attractive display of bracelets and bracelet watches. They are well-known for the high quality of their bracelets, which include the famous " Britannic " with its five years guarantee. This firm now offer a selection of 73 different patterns, and in addition to their gold and platinum models, are now making them in silver. . . Harrop's are now making their own watch cases. We were afforded the opportunity of seeing almost every conceivable pattern of bracelet case in gold and a variety of fancy shapes in platinum, diamond-set and otherwise. The firm are now making gent's gold cases in all patterns in both 9ct. and 18ct. . . the special alloy of 9ct. gold used in the manufacture of the above cases is the firm's own composition and is of a rich yellow colour, closely resembling 18ct. gold.&rdqo

In June 1936 Harrop became concessionaires for IWC watches for Britain and the Empire.

Edwin George Harrop died in 1936. The business was continued under the name Edwin Harrop by his executors, and transformed into a limited liability company Edwin Harrop Ltd. in 1938. 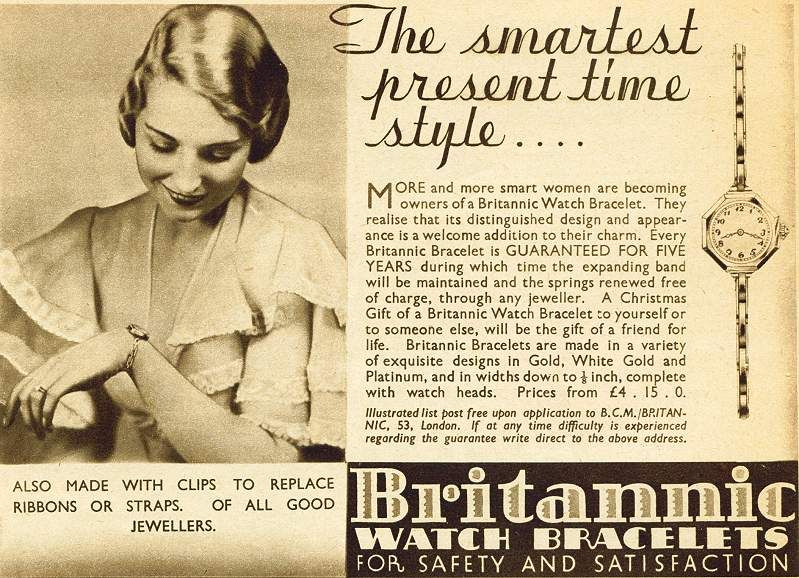 Britannic Bracelet. Thanks to www.historyworld.co.uk. Click image to enlarge. 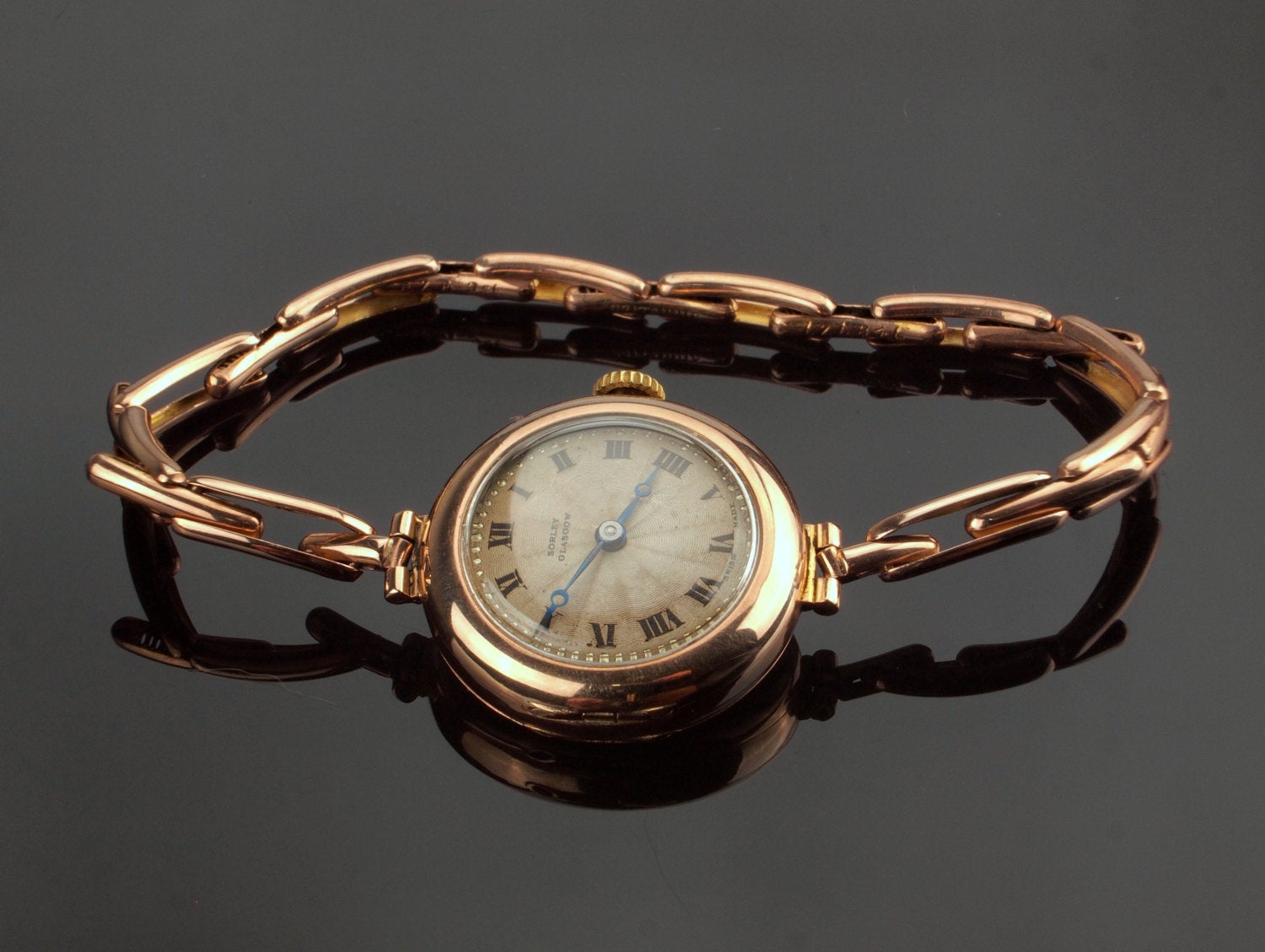 Watch with Britannic Bracelet (image found on Web, let me know if it is your copyright.) Click image to enlarge. 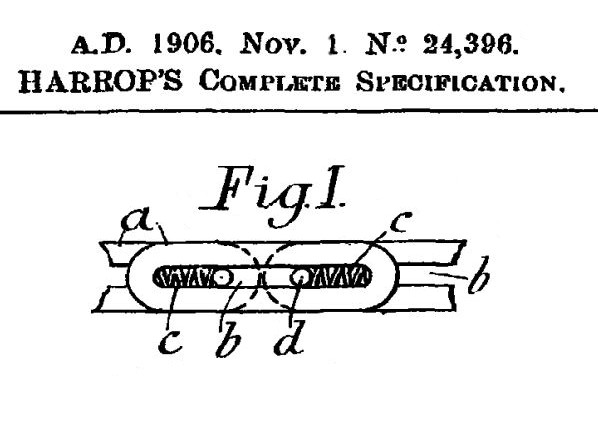 In 1906 Edwin Harrop invented an expanding metal bracelet which became extremely popular for ladies' wristwatches. He applied for a patent on 1 November 1906 and was granted in 1907 British patent No. 24396/06 for this invention.

These expanding watch bracelets were sold under the name “Britannic” and were made for many years – at least until 1964. Ladies' wristwatches fitted with them still turn up regularly today. Harrops must have sold many thousands of them. Imitators followed, for example Rotherham & Sons of Coventry made a similar version. Harrop adverts say that the name Britannic and patent No. 24396/06 should be engraved inside the bracelet.

The figure reproduced here from the patent shows how the expansion was achieved by small coil springs built into each loop of the bracelet.

In the Rolex Vade Mecum, Hans Wilsdorf says Next came the idea of expanding bracelets, which an important jewellery firm invented and launched in about 1906. This too won the approval of our British clientele ... [and] became increasingly popular throughout the Empire. The bracelet in question was, without doubt, the Harrop Britannic, which was invented in 1906 and granted a patent as an original invention, showing that it was the first of its type. So the early success of Rolex was, in part at least, due to Harrop's Britannic bracelet.

The Britannic bracelet was guaranteed for five years, and tested in public demonstrations over 110,000 cycles. But they don't last forever, especially in everyday use. The Britannic bracelet was still being advertised in 1964 as “The Queen of Watch Bracelets” but has now been unavailable, either complete or as parts, for many years. Many watches from the pre-war period have had their Britannic bracelets replaced, although the method of fixing the bracelet to the case makes this difficult. 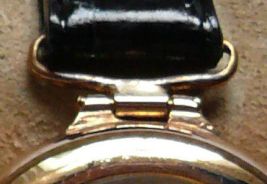 Loop Ends on my grandmother's wristwatch.

The advert reproduced here says that it can be made with clips to replace ribbons or leather straps on watches with conventional wide lugs, but a problem arises the other way around. Watches that were originally fitted with Britannic bracelets have very narrow lugs that cannot take a conventional bracelet or leather strap. The attachment to the case of the bracelet takes the form of two lugs soldered very close together onto the case with only a few millimetres between them. The end of the bracelet is inserted between the lugs and secured by passing a small pin or bar through the lugs and the end of the bracelet.

My grandmother's Rolex wristwatch was originally fitted with a Harrop Britannic expanding bracelet, but this was replaced before I knew the watch, which I can remember my mother wearing when I was a child. The photograph here shows the watch as it is now, with a leather strap. The narrow lugs soldered to the case where the Britannic bracelet was attached can be seen, but the bracelet has been replaced by Loop Ends, small gold fittings that attach to the case in the same way but have a wire loop that a leather strap can be attached to. If you have a watch is functional but the bracelet is broken, I can custom make loop ends for it that enable a leather strap to be fitted. 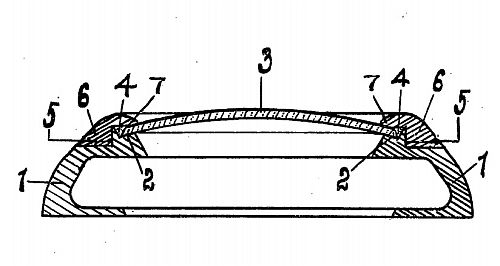 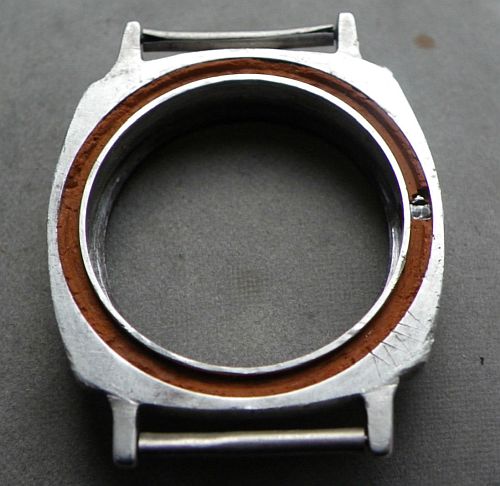 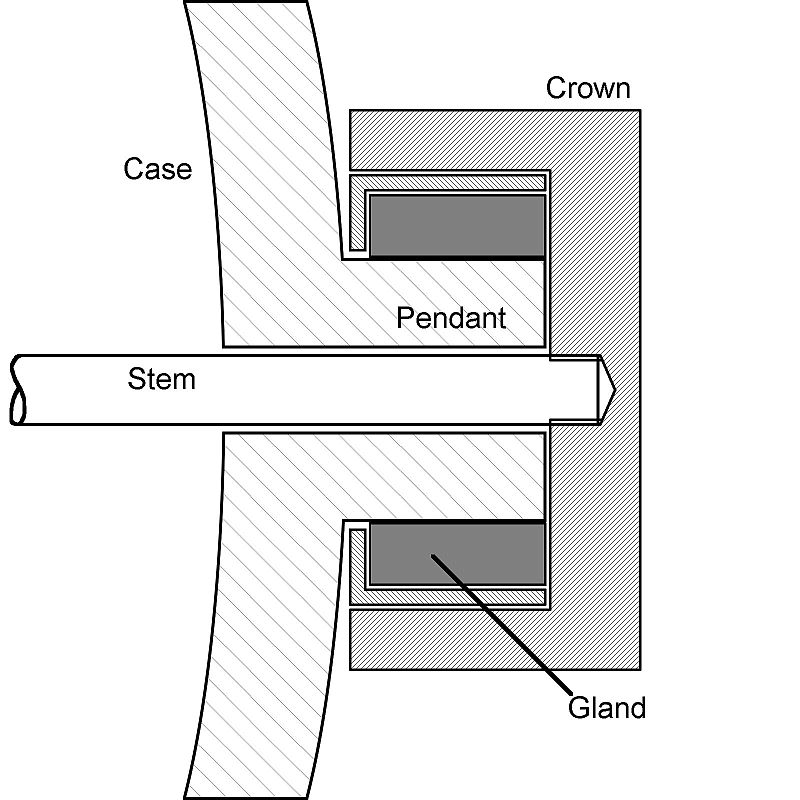 In the early 1930s a watch with the name "Submarine" was manufactured by the company Edwin Harrop of London. The cases were made in London by Harrops and fitted with Swiss made movements that were imported for the purpose. This watch was also made in a ladies' version called the ‘Mermaid’.

This was a completely different design to the earlier Submarine wristwatch manufactured by Tavannes. The use of the same name implies that the makers of the later watch did not know of the existence of the original Submarine watch.

The cases of these watches usually carry the name "Submarine" in inverted commas, the legend 'London Made' and two patent numbers, 358370 and 362229, which both refer to British patents.

The first patent, 358370, was applied for on 16 December 1930 by Frank Wachter, a US citizen, and was accepted on 8 October 1931. The subject of the patent was a snap back case with a recessed gasket to seal the joint between the snap back and the middle part of the case.

The cases are very thick and heavy in comparison to most watch cases. Gold and silver versions, which appear to be the only metals used, carry the sponsor's mark EH of the London jeweller and goldsmith Edwin Harrop.

In 1918 The London Watch Case Company was listed with E. G. Harrop and A. M. Lederman as directors. Harrops must have been on the lookout for new case designs when Wachter's patent caught their eye.

The advert reproduced here dates from 1933. It says that the watches are supplied in two sizes, an 8¾ ligne ladies' model and 10½/12 ligne men's.

Cases are usually about 5 millimetres greater in external diameter than their movement, although the Harrop submarine cases were quite thick and chunky because they had to have space for the gaskets. The movement of one watch I have examined measures about 23mm or 10.2 lignes across, which must be the 10½ ligne version; movement sizes were generally rounded to a half size in lignes. The case of that watch measures 30mm across, which was a fashionable size for a man's watch in the 1930s, and is 7 millimetres greater than the movement.

On this basis, the 12 ligne version would be about 34 or 35 millimetre in diameter across the case, for men who still preferred a larger size watch. The ladies' 8¾ ligne model would measure about 20mm across the movement and the case would be about 27 millimetre external diameter.

Two images here show the detail from the second patent of the gasket seal to the bezel, and the middle part of the case with its recessed gasket. The use of gaskets like this are very simple, almost blindingly obvious, ways of sealing the two joints, and I am rather surprised that Wachter and Harrop were granted patents for these “inventions”. Patents are supposed to be granted only to protect novel inventions that must not be obvious to a person skilled in the art, two criteria that both of these patents fail to meet.

Neither of the patents mentions any means of sealing the case where the stem enters. The advertisement states that the pendant is rendered watertight by a gland.