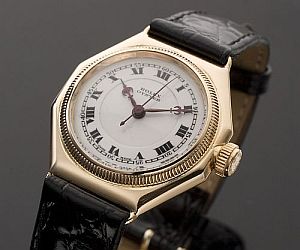 Rolex Oyster.
Image by kind permission of and © OldeTimers.com

In late 1926 Rolex launched on to the market a new watch with a waterproof screw-down crown and waterproof case. It was named the "Oyster" by Hans Wilsdorf, he said "because, like its namesake it could remain under water for an unlimited time without detriment."

Wilsdorf appears to have been stimulated to create the Oyster by patent CH 114948 for a screw down crown granted to Perregaux and Perret in 1925. It would soon have been realised that the Perregaux and Perret screw crown design was essentially useless, because of the problems with the left hand thread, and it would have been Wilsdorf who cracked the whip to get the technicians at Aegler to come up with a workable design incorporating a clutch, reinventing an idea that had been patented in America in 1881.

The Oyster case was almost certainly inspired by the 1903 Borgel 3 piece screw case, the similarities are obvious and Rolex watches had been made using these Borgel cases, as well as the original Borgel patent screw case.

Although neither the crown or the case were original designs, it was probably Wilsdorf who had the idea of pulling these two ideas together and creating a waterproof watch. Why did the Rolex Oyster achieve commercial success when many earlier waterproof watches, even the 1915 Tavannes Submarine wristwatch, had not?

Wilsdorf was not a watchmaker, but he was a marketing genius who was prepared to invest so much on advertising the Rolex name that by the 1920s he had created a known brand from a name that didn't even exist before 1908. The previous designs of waterproof watches were created by watchmakers but they were not advertised and promoted in the same way. Hans Wilsdorf was a restless marketing genius who really propelled Rolex and the Rolex Oyster, his flagship product, towards the heights it eventually reached. He did this by spending huge amounts of money on advertising direct to the public, which is something that watchmakers had not been done before. 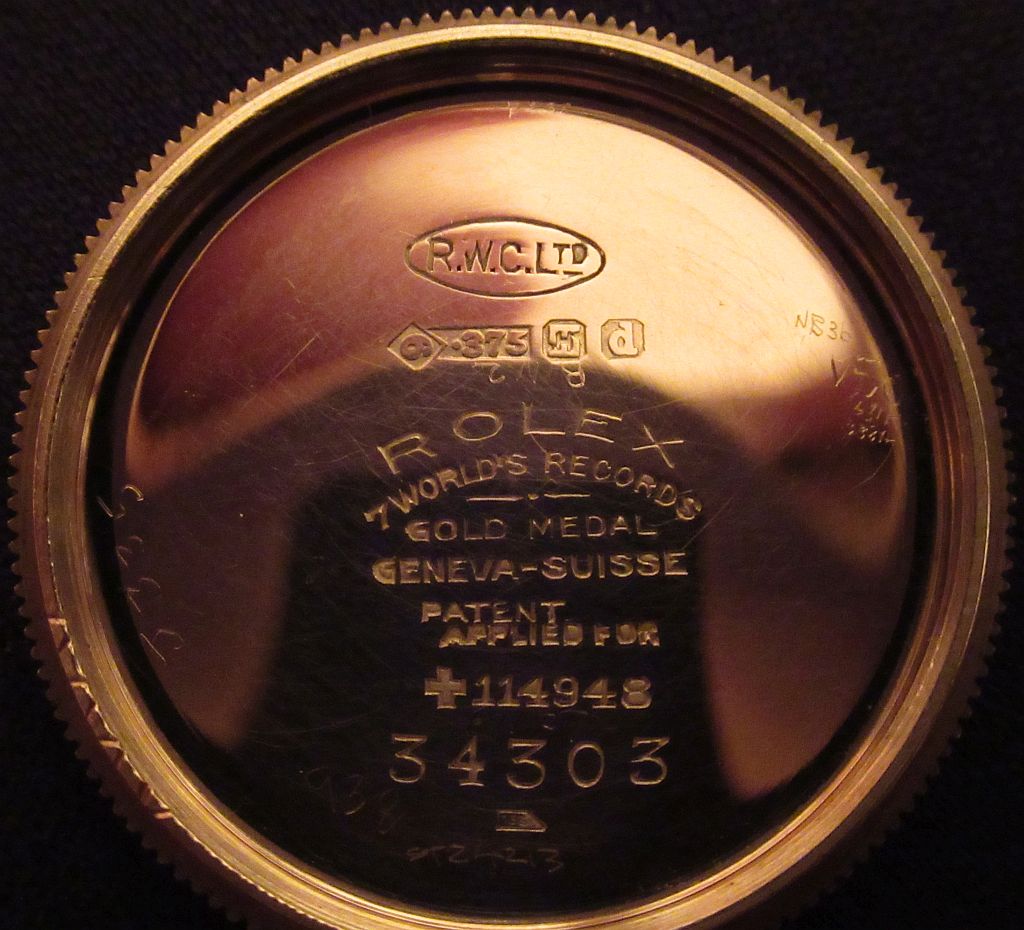 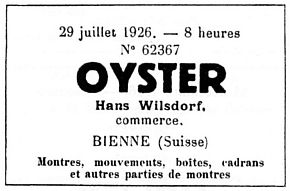 The exact date that the Rolex Oyster was in the stores and available to purchase is not known. In the Vade Mecum Wilsdorf says ‘in 1927 the waterproof “Rolex-Oyster” was launched’ but there is evidence suggesting that it was on sale late in 1926. The launch referred to by Wilsdorf was probably the start of the expensive advertising campaign.

Wilsdorf acquired the patent that started his quest for a waterproof watch from Perregaux and Perret No 114948 in October 1925 and registered the name Oyster in July 1926, as shown by the extract from the Archives de l'Horlogerie shown here.

Dowling and Hess report that they have seen Rolex Oysters bearing the Glasgow Assay Office import hallmarks and the date stamp “d” for 1926/27, and an image of one such case is shown here thanks to Ben. The Glasgow year date letter was changed on 1 July every year when new wardens were elected, so Oysters carrying the Glasgow date letter “d” were hallmarked at the Glasgow assay office between 1 July 1926 and 30 June 1927.

The case back shown here is stamped with "

114948", the Swiss Federal cross and number of the Perregaux and Perret patent, and also “Patent Applied For” above the Swiss patent number. This appears at first puzzling, because the official patent number is not known before a patent is granted and endorsed with the next number available in the patent office sequence, so this cannot refer to the Swiss patent. It must refer to a patent that had been applied for but not yet granted, which must be the next Oyster related patent, the British version of CH 114948, which has an application date of 1 September 1926 and was granted British patent number 260554 on 21 April 1927.

The Perregaux and Perret patent design of screw down crown, with its left handed thread, no clutch and poor sealing arrangement, was essentially useless and never used. So although the presence in an Oyster case back of the Swiss Federal cross and number 114948 with “Patent Applied For” above it could suggest a date as early as August 1926 (for the application for the British patent to be submitted on 1 September) the design of the screw crown that was actually used had not been finished at that time.

As soon as the designs of the case and the improved screw down crown with clutch had been created, Wilsdorf would have wanted to get watches onto the market. The applications for the patents would have been submitted as soon as the designs were finalised. Inventors cannot reveal their inventions to the public before a patent application is submitted, because this would allow someone to claim that the invention was not original. However, as soon as an application is received at the patent office, its date and time of submission is registered. When, and if, a patent is granted, that date becomes the “priority date” from which the period of protection of the invention runs. At the time in Switzerland that protection lasted for only fifteen years, so it was in an inventor's interest to get products into production and sold as soon as the application was in, rather than allow a whole year or more to elapse before the patent was granted.

The application for a Swiss patent on the Oyster case was submitted on 21 September 1926, and was granted as CH 120851 on 16 June 1927. Arriving at the design of the case was simpler than that of the screw down crown, it simply needed a screw back and bezel, which was well established technology. The only new feature was a thread on the pendant for the screw down crown, which a drawing in the patent shows was a right hand thread, unlike the left handed thread of the Perregaux and Perret patent. So the designers must have been working on a crown with a right handed thread.

Evidently the design of the screw down crown and clutch mechanism took a little longer. The first application for a patent on the successful design of screw down crown was lodged on 18 October 1926. This would have been within days of the design being completed and, since Oyster watches could not have been made before the design of the crown was finished, this gives the earliest date that an Oyster could have been made as early October 1926. Prototypes would have been made in great secrecy to test the design, but the first time that the successful design could be revealed to anyone outside the design team was after that all-important application had been lodged and the priority date and time recorded. Swiss patent number CH 120848 for this design was granted on 16 June 1927.

The application dates for the patents on the screw down crown mean that the successful design of screw down crown with clutch must have been arrived at in early October 1926, with the patent application drawn up and submitted on 18 October, securing the priority date although the patent would not be granted and numbered 120848 until 16 June 1927. The earliest Oyster watches with the Swiss Federal cross and number 114948 with “Patent Applied For” above it must have therefore been made between 18 October 1926, when the application was made for a patent on the successful design of the screw down crown, and 21 April 1927 when British patent number 260554 was granted, meaning that the wording Patent Applied For was no longer needed because the number of the patent was then known.