The section below about cylinder escapements is from my page about watch movements.

The Swiss in contrast perfected the design of the cylinder escapement and produced millions of watches with it, right up to the beginning of the twentieth century. Although they gave good service to millions of customers, Swiss watches with cylinder escapements that were imported into England were usually at the cheaper end of the price scale. Consequently the cylinder escapement is usually looked upon rather contemptuously by watch collectors. It is capable of good timekeeping but needs regular servicing, which is becoming more and more difficult as time goes on.

Swiss cylinder escapements are usually found in watches with Lépine calibres. These are named after Jean Antoine Lépine, a French watchmaker who created the modern slim form of watch with separate cocks and bridges in the eighteenth century.

The cylinder is always in contact with the escape wheel, causing sliding friction as the balance and cylinder turn. Without regular cleaning and oiling this will cause severe wear to the cylinder. Today it would be uneconomic to replace a worn or broken cylinder unless the watch was something very special, and the number of repairers who can replace a cylinder is small and dwindling.

The cylinder escapement is also called the horizontal escapement, in contrast to the vertical verge escapement that preceded it. 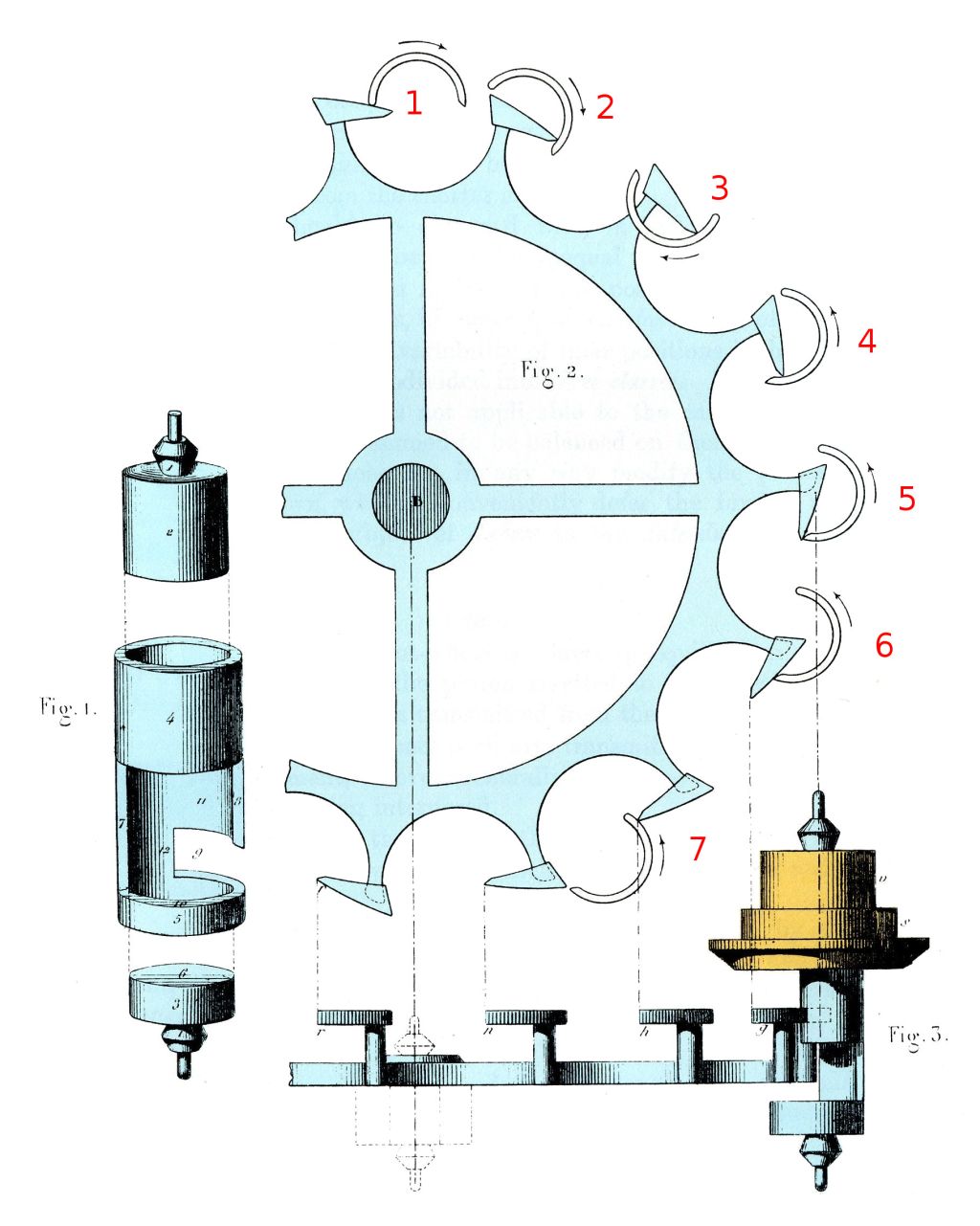 The image here is based on an image in Saunier's Treatise on Modern Horology. Fig. 1 on the left shows why the cylinder escapement is so called, a cylinder with its wall partly cut away forms the arbor on which the balance turns, the two plugs at the top and bottom carry the pivots. The cut away part of the cylinder wall allows the shaped teeth of the escape wheel to pass as the balance swings. The wider cut away at the bottom allows the tooth support to pass.

The plan view Fig. 2 shows how the escapement works. The figure shows a series of actions by showing the cylinder in white adjacent to successive teeth of the escape wheel; in reality of course the cylinder turns back and forth in one place while the escape wheel ticks round. The different steps are labelled with red numbers.

Because a tooth is always in contact with the cylinder this is called a “frictional rest” escapement. This friction is part of the reason why the balance needs to constantly be given more energy to keep it swinging. More friction occurs at the cylinder pivots, and due to air resistance as the cylinder swings.

The sequence of steps shows another limitation of the cylinder escapement, the amplitude is limited because the tooth must lock on both the outside and inside of the cylinder, so the amplitude cannot be more than about 180°. The amplitude determines the maximum speed that the balance achieves, and therefore affects the amount of stored energy in the oscillating balance. A detached lever escapement can reach amplitudes of over 270° and therefore store a lot more energy, making it more resistant to disturbances.

In "Watchmaking in England, 1760-1820" by Leonard Weiss is the following quote from 'A Mechanic' in 1859, which throws an interesting light on the situation:

"The horizontal escapement was invented in England, and was found by its frictional action during the state of rest of the train so nearly to counter-balance the variable impulse given by the spring, that even with the crude going–barrels the average performance of the watch was amazingly improved. English engineers had by experiment proved that friction was much less between different metals than between similar, therefore the watchmaker made the horizontal wheel of brass and his cylinder of steel. Meanwhile public taste demanded flat watches, and the Swiss made the horizontal escapement of steel entirely, thereby sacrificing theory to demand. After a time it was found that, whereas the brass wheel destroyed the cylinder very quickly, the steel wheel hardly marked it in years of wear, clearly showing that even if there be a slight excess of that friction that retards motion, it is a less evil than the absolute wear of the machine itself. The Swiss were thus rewarded for studying the taste of the public by a large trade, and have made their country the home of the horizontal escapement."

The major problem with the brass escape wheel and steel cylinder combination used by English watchmakers was that the softer brass picked up particles of dust which embedded themselves into the surface of the escape wheel, turning it into a grinding wheel as it rubbed against the steel cylinder, thus wearing it away very quickly. The Swiss combination of steel wheel and steel cylinder didn't suffer nearly so much from this problem, although dust in the oil will still cause wear over the years.

The point that 'A Mechanic' is making is that because the cylinder escapement is a "frictional rest" escapement it should, in theory, be improved by reducing friction and therefore using a combination of brass and steel for the wheel and cylinder. However, in practice the friction of the cylinder is actually beneficial to timekeeping, because in a movement without a fusee, where the spring barrel called a "going barrel" drives the train directly, the friction evens out the torque from the mainspring.

The combination of high friction with high spring torque, and low friction with low spring torque, results in a greater consistency of amplitude of the balance from when the mainspring is fully wound to when it is run down. If the balance and spring were perfectly isochronous this wouldn't matter because the period in big and small amplitudes would be the same, but perfection is difficult to achieve, especially with eighteenth and nineteenth spring technology, and the greater consistency of amplitudes resulted in a rate that was more constant than might have been expected. The combination of steel on steel used by the Swiss produced a superior timekeeping performance to the lower friction combination of brass on steel favoured by the English watchmakers for theoretical reasons.

English watchmakers couldn't get over their view that using steel on steel was bad engineering, so when they did make cylinder escapements they used brass escape wheels and then, observing that these wore out quickly, condemned the cylinder escapement. The Swiss however were not so purist and observing that steel on steel worked very well, even if it shouldn't in theory, made millions of watches with cylinder escapements, which they sold cheaply to customers who didn't know or care about the difference between a cylinder and a lever escapement and were happy to get a cheap watch that kept time well. And we all know what happened to the Swiss and the English watch making industries.

Identification and Care of a Cylinder Escapement 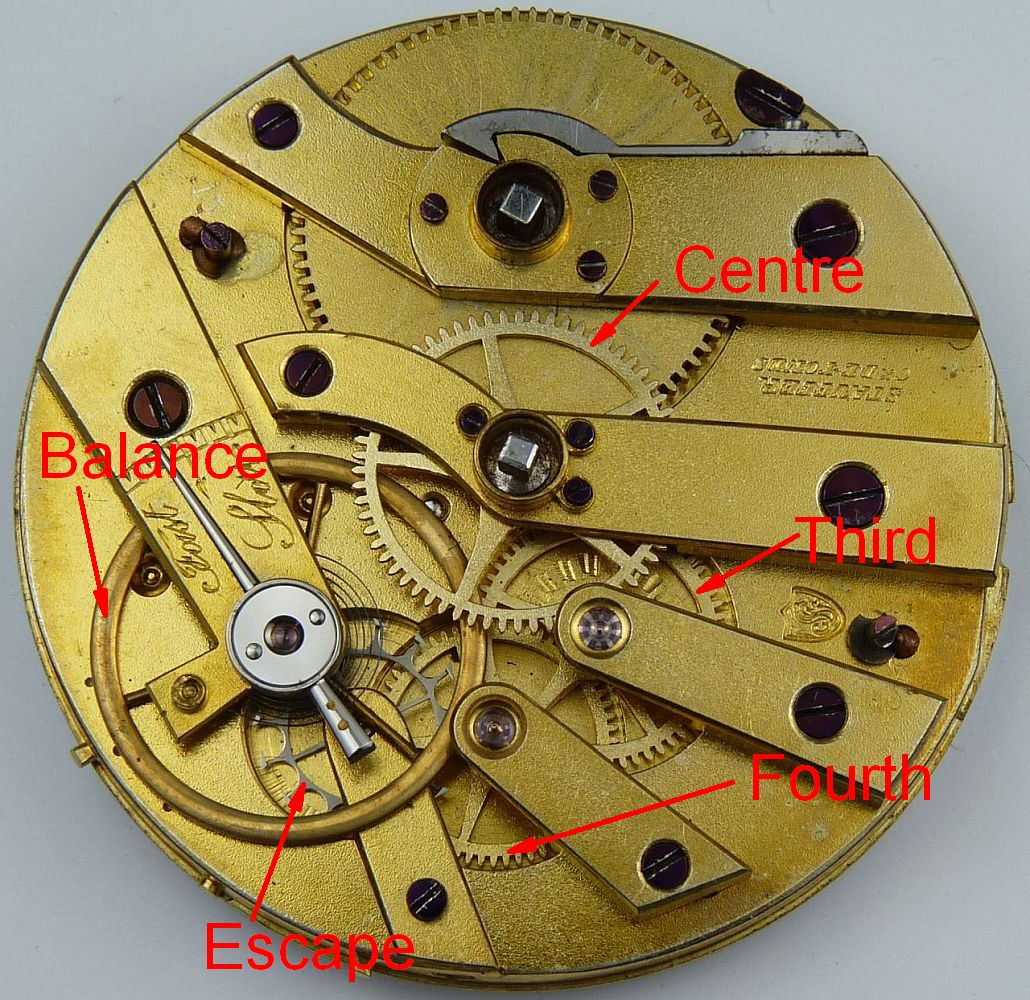 An early Stauffer movement with cylinder escapement. Such movements are usually anonymous. Click image to enlarge.

How can you tell if a watch has a cylinder rather than a lever escapement? The picture here is of an old movement with cylinder escapement. This is a mid nineteenth century movement and later movements may look different, but their wheel trains are the same so ignore the shapes of the cocks and bridges and concentrate on the wheels.

Although the performance and longevity of Swiss made cylinder escapements with steel escape wheels and steel cylinders was better than English ones with brass escape wheels and steel cylinders, the difference is relative rather than absolute; the cylinder wears more slowly with the Swiss steel escape wheel, but it still does wear as the oil picks up dust and turns to a fine grinding paste. They were also usually at the lower end of the price scale so the train pivots are not jewelled. Jewels in watch movements are not just there to look pretty, or even to reduce friction; their principal role is to provide a hard bearing surface the reduces wear. An watch without train jewels needs servicing more than one with jewels if wear of the bearings in the plates is going to be kept within acceptable limits.

The only way to delay the inevitable is to have the movement regularly serviced, when it will be cleaned to remove the old mixture of oil and dust and lubricated with fresh clean oil. This should be done before the performance starts to deteriorate noticeably, because by then the damage can have been done, and replacing a cylinder is a job that fewer and fewer watch repairers are prepared to do. Even if you can find someone who will take on the task, it may be uneconomic because, in the main, watches with cylinder movements are not very collectible and therefore not highly valued - although if the item is a family heirloom this shouldn't matter.

The first watchmaker to make great use of the cylinder escapement was Jean Antoine Lépine who used them in watches that were, at the time, sensationally thin. With his designs Lépine created the modern watch and deserves to be far better known than he is. Lépine's designs formed the basis for the vast majority of French and Swiss watch production in the late eighteenth and through the nineteenth century. There is some information about dating Lépine calibres on the page about Jean Antoine Lépine.

The great Abraham Louis Breguet overcame the problem of wear in the cylinder escapement to a very great extent by making his cylinders of ruby, but don't expect to find such an exotic device in a cheap Swiss watch.