I make additions and corrections to this website frequently, but because they are buried somewhere on one of the pages the changes are not very noticeable, so I decided to create this blog section to highlight new material. Here below you will find part of one of the pages that I have recently either changed or added to significantly.

The section reproduced here is from my page about English Watchmaking. 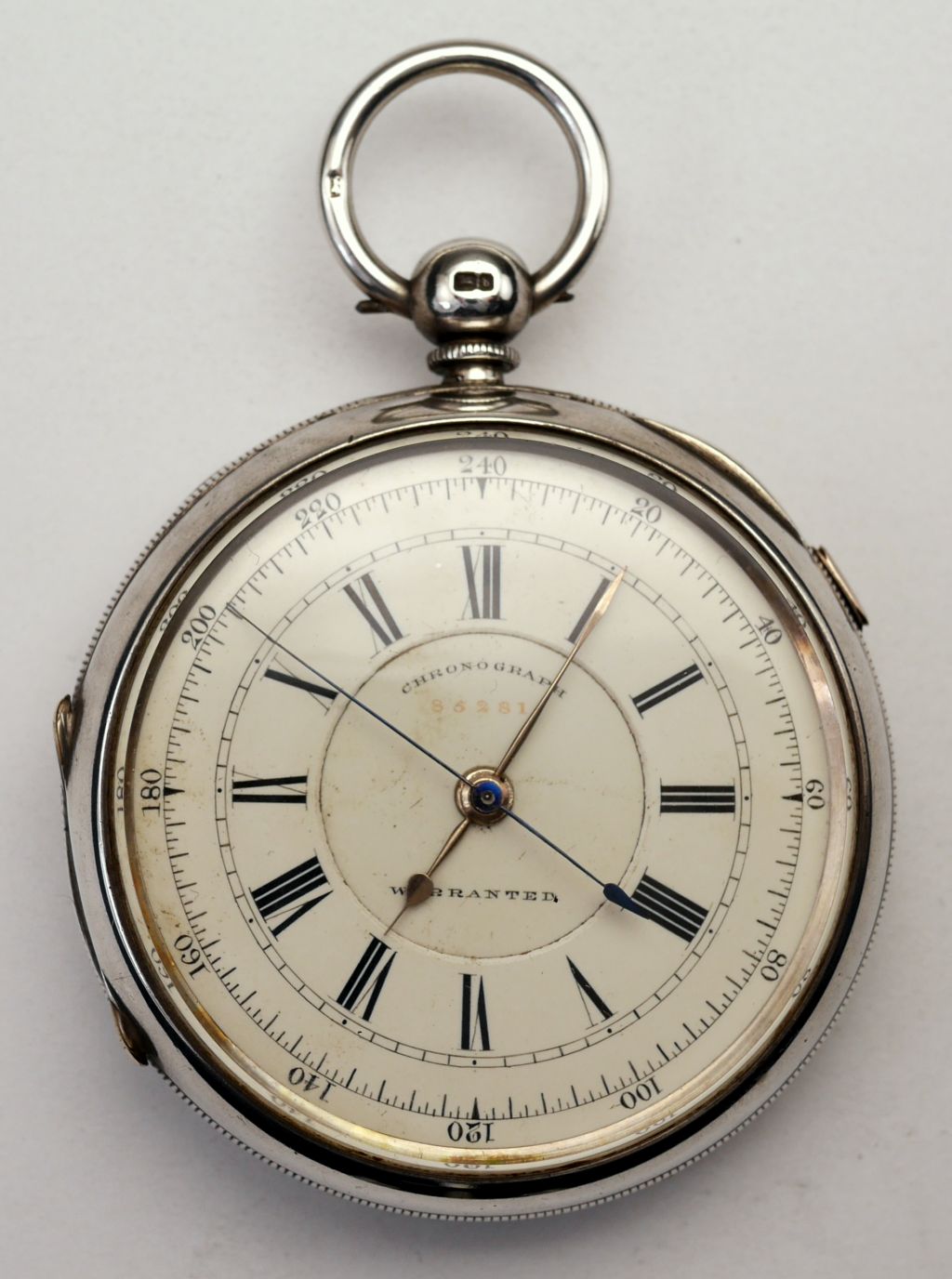 In the late nineteenth century, centre second chronograph watches became quite popular in Britain. They usually had a slide on the case band that caused a strip of metal to press against the balance staff, stopping the balance. This caused the watch to stop keeping time when the chronograph function was used. There was no means of setting the seconds hand to zero, or recording more than one minute, which is all rather inconvenient. The watches were probably popular because people liked the appearance of the dial, with its large, sweeping, centre seconds hand, rather than because they wanted to use them as chronographs (much like the enthusiasm for chronograph wristwatches today).

The dials of early chronographs of this type were marked out with a track of 240 divisions around the edge, such as the one in the photograph here of a watch with a sterling silver case with London Assay Office hallmarks for 1878 to 1879. The use of 240 divisions was because the movement has a 14,400 vph escapement which ticked four times per second or 240 time per minute. The elapsed time could therefore in theory be read to an accuracy of ¼ of a second. The 14,400 vph escapement was an old design, but the newer type of escapement operating at 16,200 vph made 4.5 ticks per second and 270 per minute, which was obviously inconvenient for a chronograph and does not appear to have been used.

On 13 Sept 1875, John Lecomber, a wholesale watch manufacturer of Liverpool, registered under the Merchandise Marks Act (1862) a “Decimal Chronograph” having a dial with a track around its outer edge marked out in 300 divisions. This dial was to be used with a movement having an 18,000 vph train, which ticks five times per second or 300 times per minute. Lecomber claimed as part of his design an escape wheel pinion with 6 teeth working with a fourth wheel pinion with 60 teeth.

Watches made by Lecomber have “Decimal Chronograph Registered 13 Sept 1875” on the dial, and usually have Lecomber's name on the movement and his JL incuse sponsor's mark on a hallmarked case. Lecomber said the invention had been very profitable to him. He chose the name “Decimal Chronograph” because instead of the 16,200 vph movement, which made nine ticks in two seconds, the 18,000 vph movement he used made 10 ticks in two seconds. After the passing of the Trade Marks Act of 1875, Lecomber registered “Decimal Chronograph 13th September 1875” as a trademark on 31 May 1876.

In 1883 Lecomber spotted, in the window of Mrs. Samuel’s shop in Market Street, Manchester, a watch not made by him which had “Decimal Chronograph” on the dial. Mrs. Samuel was Harriet Samuel who founded the chain of high street shops today called H. Samuel. Lecomber had a friend purchase the watch and then took legal action against Mrs. Samuel, which was only stayed after she paid Lecomber £115, a lot of money in 1883.

Lecomber discovered that the watch in question had been made by Edwin John Hollins, a Coventry watch manufacturer, using a movement made by Joseph Preston of Prescot. However, it was Hollins who was making watches with the words Decimal Chronograph on the dials so Lecomber indicted him under the 1862 Merchandise Marks Act for the misdemeanour of issuing a false trade mark with intent to defraud, which carried a penalty of a fine or up to two years’ imprisonment with hard labour.

The case of Lecomber v. Hollins was first heard on 27 June 1883 by the city magistrates of Coventry. A witness by the name of Williams, from the town of Bury in Lancashire, stated that since 1879 he had paid Lecomber a royalty of half-a-crown a watch to use the name decimal chronograph on his own “Improved Decimal Chronograph” watches. However, William Payne, Joseph Flint and Joseph Franklin, all watch dial makers of Coventry, stated that the names Patent Chronograph, Decimal Chronograph and Marine Chronograph were widely used on the dials of watches made in Coventry, and had been for many years. In defence, Hollins' lawyer said that the words “decimal chronograph” were merely a description which could not form the subject of a trade mark, and quoted a case under the Trade Marks Registration Act, 1875, in which the Master of the Rolls held that words which simply described something could not be registered.

The case created quite a stir in the trade. On the 3rd of July 1883 a meeting of about 50 watch manufacturers was held at Coventry, under the chairmanship of Mr. J. Radges, of the Butts, and a resolution was passed that those present sympathised with Mr. Hollins and resolve to assist him in defraying the expenses for his defence. The case was reported in the Horological Journal of August.

The case eventually ended up at the Warwickshire Summer Assizes on the 2nd of August 1883 before Mr. Justice A. L. Smith, where the judge and jury agreed with the reasoning that the words “Decimal Chronograph” were purely descriptive and that, since the dial had also carried the name H. Samuel, there had been no intention to defraud. The action against Hollins was dismissed without the case for the defence even being heard.

Watches are sometimes seen with the wording “Decimal Chronograph” and “Regestered [sic] Prov'ly Aug. 4th 1885”. This is a bit of a mystery, there can hardly have been anyone in the trade that did not know about Lecomber v. Hollins. There was also no such thing as a provisional registration; under the Merchandise Marks and Trade Mark Acts something was either registered or it was not. The wording probably means that an application for registration had been submitted but, given the prior events, it most likely would have failed to be accepted.

Some nineteenth century pocket watches are seen with the words “Patent Chronograph” on the dial and movement which have cylinder escapements, which means that they are of Swiss origin. It appears that one or more Swiss manufacturers decided to cash in on the interest in Britain in chronograph movements. These are almost certainly not the subject of a patent and the wording on the dial is false. Perhaps the Lecomber v. Hollins court case persuaded them that it was acceptable to apply this wording, although it is most likely a false description.