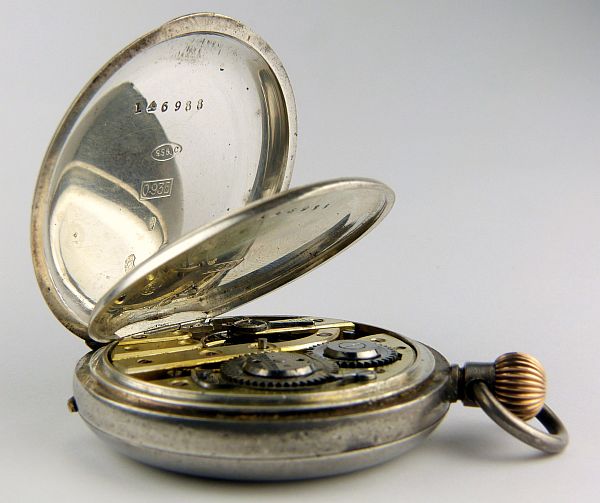 One of the questions I am occasionally asked is "Why does the case have two backs?". This is where a case has a jointed (hinged) back that opens to reveal an inner back or cover, sometimes called a "cuvette", which is itself can be also be opened to reveal the movement.

This case design goes back to watches that were wound from the back, and some set from the back, with a key. Each time the watch needed to be wound or have the time set, the back was opened and a key with a hollow square end was applied to a square end on either the mainspring barrel arbor and turned to wind the mainspring, or to a square on a friction post that ran through the centre arbor and carried the minute hand and was turned to set the hands. If there were no protection for the movement, then a clumsy person could accidentally press the key into the watch mechanism and damage it.

In the earliest watches, the movement was set into a case or “box” that had a hole in the back for the winding key. Sometimes this hole was covered by a shutter to prevent dust entering, which was pushed aside to allow winding. This was not an entirely satisfactory arrangement, and watches usually had a second out case to protect the inner case. This arrangement was called a “pair case.” The inner case of a pair case has a hole for the key to pass through to wind the spring, and the outer case then covers this hole.

The style conscious French nobility were never particularly fond of the bulky pair case, and the fashion that began in France around 1775 for close fitting waistcoats resulted in them abandoning it altogether. Jean Antoine Lépine fitted his watches with single cases with no hole in the back. The watch was wound through the dial, which spoiled its appearance and exposed the enamel to damage by the key of a clumsy owner.

To avoid the need for a winding hole in the dial, Lépine designed a case with a middle part, called the "band", to which the movement was fixed. A bezel carrying the crystal was fixed to the front of the band, and to the back were hinged two covers, an outer and inner. The outer cover is usually called the bottom or back, the second the inner cover or cuvette. The cuvette had one or two holes for the key, one offset from the centre for winding the mainspring, a second in the centre if the hands were set from the back.

Lépine invented hand setting from the back of the watch, boring the centre arbor so that a centre post that carried the minute hand could be passed through it, driven by friction between the two. The cannon pinion is mounted on the centre post. When the hands were set from the back there was no need for the front bezel to open and it was made to simply snap on, doing away with the need for a hinge at the front for the bezel. The movement was fixed to the band, eliminating the hinge for the movement to be swung out from the front of the case.

The case invented by Lépine, with the movement fixed to the band, snap on front bezel and two hinged backs, is sometimes attributed to Breguet, who later used the same design. Breguet usually made the inner cuvette of gilt copper or brass, and only made it of gold in watches of his top quality, ‘ouvrage premiere classe’. It thus became the standard practice in France to make the cuvette of base metal, except in the best quality work.

In English watches the inner cover, which was called the dome, was regarded as part of the watch case by the assay office, whether it was fixed to the band or jointed (hinged) to it in a Lépine style case. Because of this the dome had to be made of the same standard of metal as the rest of the case, e.g. 18 carat gold or sterling silver, or none of the case would be hallmarked by the assay office.

Like Breguet, Swiss makers did not regard the inner cuvette as part of the case, after all it was only there as a barrier to prevent a clumsy owner damaging his watch and was not seen when the outer back was closed, so they allowed it to be made of base metal. This was often plated with gold or silver to tone with the rest of the case, but marked "metal" or "cuivre" (copper) so that it could not be not mistaken for precious metal.

In later movements that were wound and set by the crown, the holes in the cuvette for the key were not needed, but it was retained for better quality watches. This may have been partly because of tradition, a sign of quality workmanship not found in cheaper watches, and it might give better protection against the ingress of dust than a single case back.

An English lever watch is often described as having a “consular” case. The definition of what constitutes a consular watch case is not clearly laid down in any reference that I have found. The name consular is frequently used for any case that has a jointed (hinged) bezel and jointed back, with a second fixed inner back with a hole through it for the winding key. I believe that this is incorrect and that the consular case is a particular version of a double-bottom case.

In “The artistry of the English Watch”, Cedric Jagger says The consular case - which is said, traditionally, to be associated with Napoleon's appointment as First Consul, even if the dates do not actually match up, - seems first to have been introduced by the precision watchmakers in circa 1775. Essentially, it is a single case with a double back, the outer of which is opened for access to the winding and hand setting squares, while the movement swings out from the front." The government of France was called the Consulate after the fall of the Directory in 1799 until the start of the Napoleonic Empire in 1804. Executive power was vested in three consuls. At first these were all equal in authority, but Napoleon quickly consolidated power in himself as “First Consul”.

Jagger's description of a single case with a double back, one that opens and one that is fixed in place with a hole or holes for the key, would apply to the cases of English lever watches, and several sources point in the same direction. Both Britten and de Carle imply that the terms consular and double bottom are synonymous, as does Terence Camerer Cuss in the glossary to “The English Watch: 1585 – 1970”.

However, I noted that David Penney described on his web site that the case of Pennington watch No. 5443 has an “18ct gold case of true consular form, the band and both covers all pivoted on the same joint” [emphasis added]. David told me that in his view the distinctive feature of a consular case is that the front bezel and the case back are connected to the middle part of the case by a single “joint” (the casemaker's term for what is otherwise called a hinge). The tubes or “charnières” of this joint, soldered to the bezel, case back and the case middle part, all sit alongside each other and are all connected by a single pin.

After David explained this to me I went through Terence Camerer Cuss's book again and I noted that all the cases that are described as consular are in the chapter 1775 to 1825 and have the single joint feature, whereas later cases with separate joints for the back and bezel are called simply cases, not consular cases. This confirmed to me that David's description of the single joint being the principal distinguishing feature of a consular case must be correct, although this doesn't appear in any book that I have seen.

The use of a single joint to hold the back and bezel to the middle part of a consular case is quite distinct from the later cases used for English lever watches that have separate joints for the back and bezel. I don't have any watches with consular cases but examples can be found on David's web site at David Penney's Antique Watch Store.

The consular case appears to be the first evolution of the pair case. In a pair case watch, the movement is contained in an inner case that has a hole in the back for winding and a jointed bezel which carries the glass and is opened to set the hands. To prevent dust entering through the winding hole, the inner case is encased in an outer “pair case” which is jointed at the middle so that the watch can be removed for winding. The front of the pair case has no glass, it is just an open ring or bezel.

In a consular case the inner and outer cases of a pair case were combined into one. The bezel of the inner case was discarded and the glass was mounted in the bezel of the outer case. The charnières of what had previously been the joint between the band and the back of the inner case of a pair case watch were integrated into the joint of the outer case. The movement remained attached at 12 to the vestigial inner case, which was now the case middle part with a fixed inner back.

French watches were sometimes wound through a hole in the dial and the hands set by turning them with a key on a square boss of the minute hand or centre arbor, so there was no need for the owner to access the back of the movement, so their cases had a single back or bottom fixed to the middle part of the case. Putting the winding hole through the dial was rather unsightly in itself, and it often resulted in the enamel of the dial being damaged by the key. However, having only a single bottom meant that the case was as slim as it could be, which the current French fashion of the time for tight fitting waistcoats preferred. There doesn't appear to be a well defined name for this style of case, but Jean-Antoine Lépine of Paris was the pioneer of slim watches at the time. Open faced watches are generally known as "Lépine" watches, perhaps the design with a single bottom was the definitive version.