This blog is not currently part of a page, it is a stand alone item. 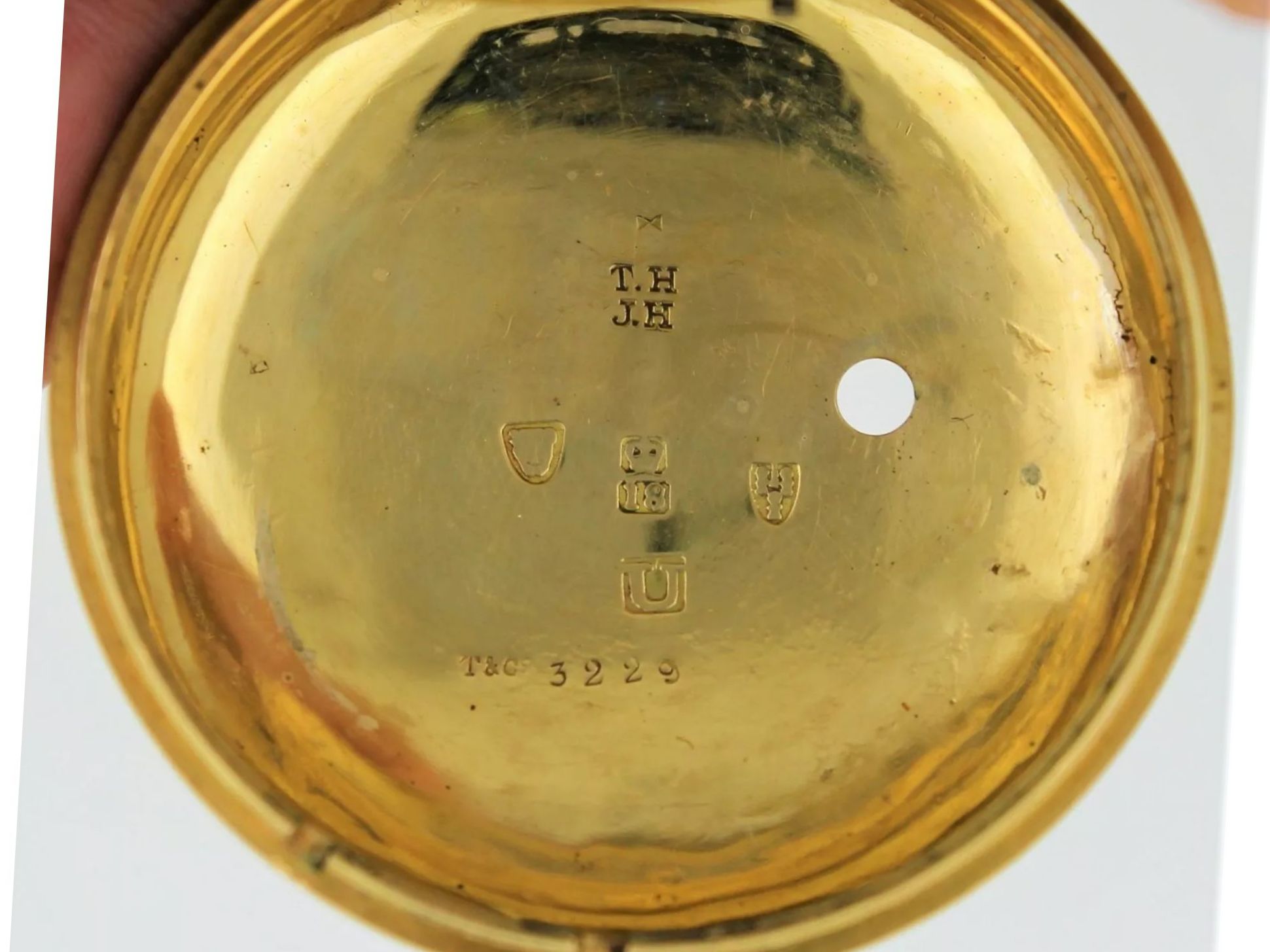 It is often thought that the leopard's head is the mark of the London Assay Office, but this is not strictly true.

The leopard's head was the first mark struck on gold and silver items by wardens of the London goldsmiths in 1300, and at the time it was the only mark struck. The mark was applied only if the gold or silver was of the required standard of purity or fineness, so the leopard's head was the first “standard” mark. When assay offices were later established in other towns, they too struck the mark of the leopard's head as a standard mark. To distinguish these hallmarks from those made in London, each town had its own distinctive town mark, usually based on the coat of arms of the town.

The mark was originally not a leopard's head. The Act of Edward I in 1300 that authorised the wardens of London goldsmiths' guild to place this mark specified, in Norman French, that it was to be “une teste de leopart”. The heraldic term for a lion shown passant guardant, a walking lion looking towards the viewer, is a leopart, so the Act really specified a lion's head looking towards the viewer, and early marks show a crowned lion's head with a full mane and beard, which no leopard has. The Norman French of the Act was rendered into English by the goldsmiths as “leopard” and the depiction of the beast gradually changed over the centuries, losing crown, mane and beard. At the London Assay Office the mane went first, in 1739, followed by the crown in 1822. The mark struck by the London Assay Office is now definitively a leopard, not a leopart.

The case is 18 carat gold. The standard mark on watch cases for 18 carat gold is usually just a crown and the number 18, but the Chester Assay Office also struck the leopard's head on gold and silver from 1720 until 1839. This is useful because it immediately shows that this case was hallmarked before 1840.

I consulted Bradbury's book of Hallmarks, which shows that the Chester Assay Office leopard's head had a crown from 1720 until 1822 and then was without a crown from 1822 until 1839. The leopard in this case is uncrowned, so I concluded that the hallmarks must have been struck after 1822 and that the Roman capital “U” is the date letter for 1838 to 1839. However, it turns out that the table in Bradbury contains a number of errors and cannot be relied on to date Chester Assay Office hallmarks from this period.

The sponsor's mark, T.H over J.H incuse, was entered by Thomas Helsby & John Helsby, Goldsmiths, Silversmiths & Watchcase Manufacturers at 26 Vauxhall Road Liverpool. Liverpool didn't have its own assay office so watch cases were sent from Liverpool to Chester, a distance of only about 20 miles, to be assayed and hallmarked. Unfortunately the extant records of the Chester Assay Office don't contain details of this registration. Ridgway & Priestley's “Chester Gold and Silver Marks” shows this mark and gives a date range of 1820-30 based on Gore's Trade Directories for those years. This appeared to support my reading of the date letter as being after 1822. However, it turns out that the Helsby brothers were actually working together before 1820.

So that all seemed pretty straight forward. Then my correspondent wrote back with a bit of a bombshell; the cap which covers the movement is inscribed with a dedication from a father to his son dated 1818. There was no other way of reading the inscription; the watch must have been made before 1818!

So much for Bradbury. I now looked in Jackson's, which is the bible of hallmarks on silver and gold for many reasons, one of which being that Sir Charles James Jackson was incredibly thorough and took his images of marks from actual pieces wherever possible. Jackson illustrates Chester leopard's head marks that are almost completely different from those in Bradbury, and shows that the Chester leopard lost his crown in 1809. The leopard's head mark shown in use at Chester after that date until 1821 is exactly like the one in the watch, so the date letter is the Roman capital “U” used at Chester from July 1816 to 5 July 1817, which ties in neatly with the date of 1818 engraved on the cap. 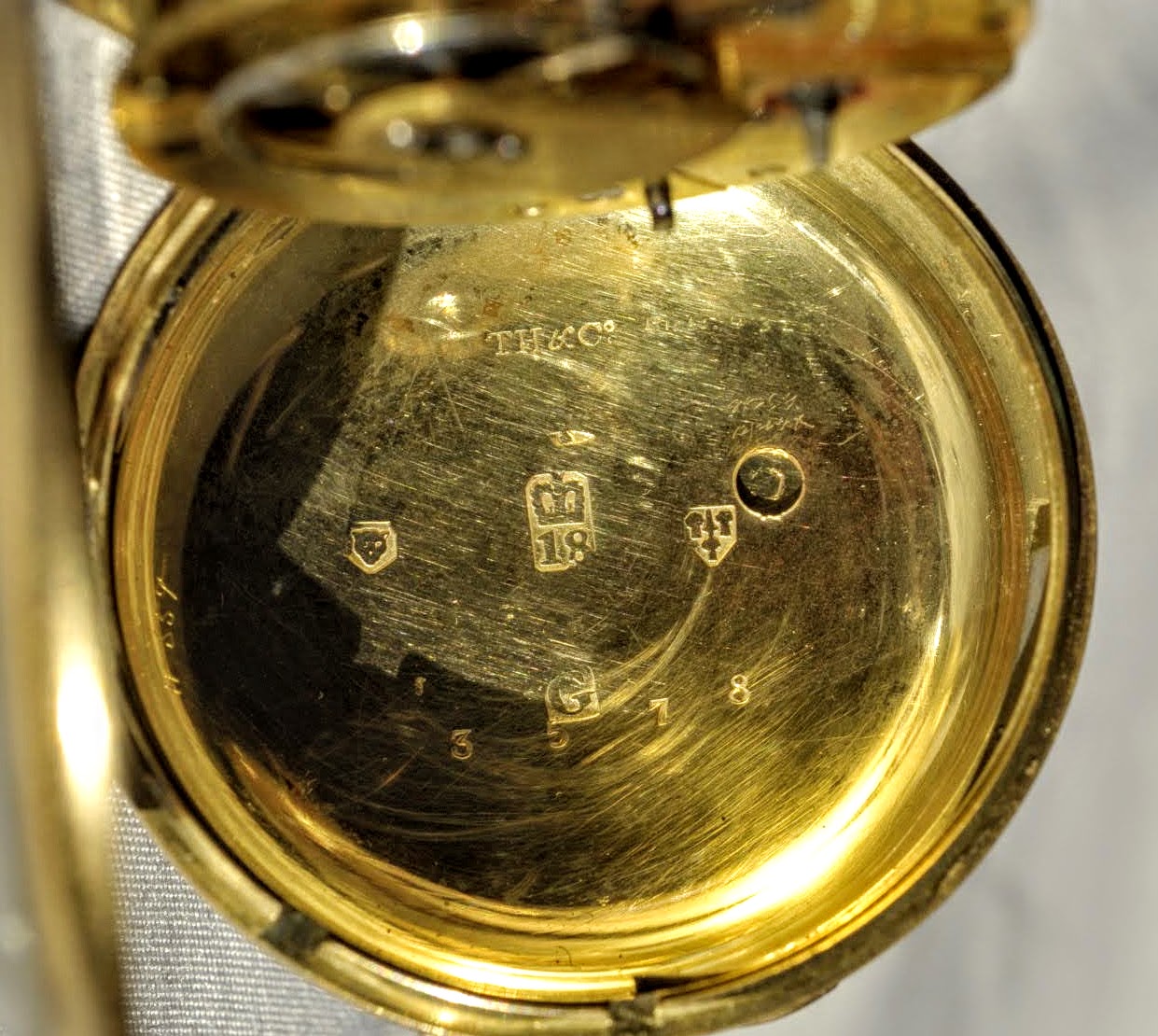 The Chester hallmark suggests that the watch was made in Liverpool, and the large train jewels (not shown here) confirmed this, being a fashion sometimes called “Liverpool windows”. The name on a watch from this period is often that of a retailer, but the movement of this watch is engraved “M I Tobias & Co.” for Michael Isaac Tobias & Co. which might in this case refer to the actual watchmaker who finished the watch. Unfortunately not much is know about Tobias, except that a lot of fake watches carry the name M J Tobias. The T&Co. visible in the photograph of the case most likely refers to Tobias & Co. - probably the way Helsbys kept track of who ordered the expensive gold case.

Rather strangely, about a week after the previous query I received another about a watch case with very similar but slightly later marks, shown in the second image here. This nicely illustrates the leopard with a round face and prominent round ears of the punch used at Chester from 1824 until 1839. The punch used from 1821 to 1824 was very similar, but face was slimmer and the ears more pointed. The Roman capital “G” of this hallmark must therefore be the date letter for 5 July 1825 to 5 July 1826.

The sponsor's mark “T.H & Co.” incuse without a surround was first entered at the Chester Assay Office by Thomas Helsby & Company, Goldsmiths, Silversmiths & Watchcase Manufacturers at 22 Northampton Street, Liverpool. The date is not known but Gore's trade directory lists the company in 1816.

It appears that Thomas Helsby started in business as a watchcase & snuffbox maker at 26 Trueman Street, Liverpool, in circa 1793. He later removed to Vauxhall Road. An incuse sponsor's mark TH & Son entered by Thomas Helsby & Son as Goldsmiths, Silversmiths & Watchcase Manufacturers at Vauxhall Road suggests that Thomas Helsby was joined by his son around 1807. The sponsor's mark T.H over J.H incuse was entered by Thomas Helsby & John Helsby, Goldsmiths, Silversmiths & Watchcase Manufacturers at 26 Vauxhall Road some time later, perhaps signifying a full partnership after John had served his apprenticeship. Later sponsor's marks entered by John Helsby alone suggest that either Thomas retired, or John left the partnership and set up on his own.