The section below is from my page about Rolex.

The case of this watch has British Import Hallmarks showing that it was retailed in Britain. The principal reason that I was suspicious is that watches of this age, around 1917 to 1918, that were sold in Britain didn't carry manufacturer's names or logos on the dial because British retailers didn't allow it. Wilsdorf himself said that it was not until the mid 1920s that British retailers began to accept watches with names on the dial like this. For more detail about this, see Names on the Dial.

It is recorded in the book by Dowling and Hess that Hans Wilsdorf registered the name “Marconi Lever” on 24 January 1911. They also say that the Marconi brand was first used on a watch in 1920. Dowling and Hess note that Marconi watches were sold through “parallel channels”, which meant dealers who were not Rolex agents. 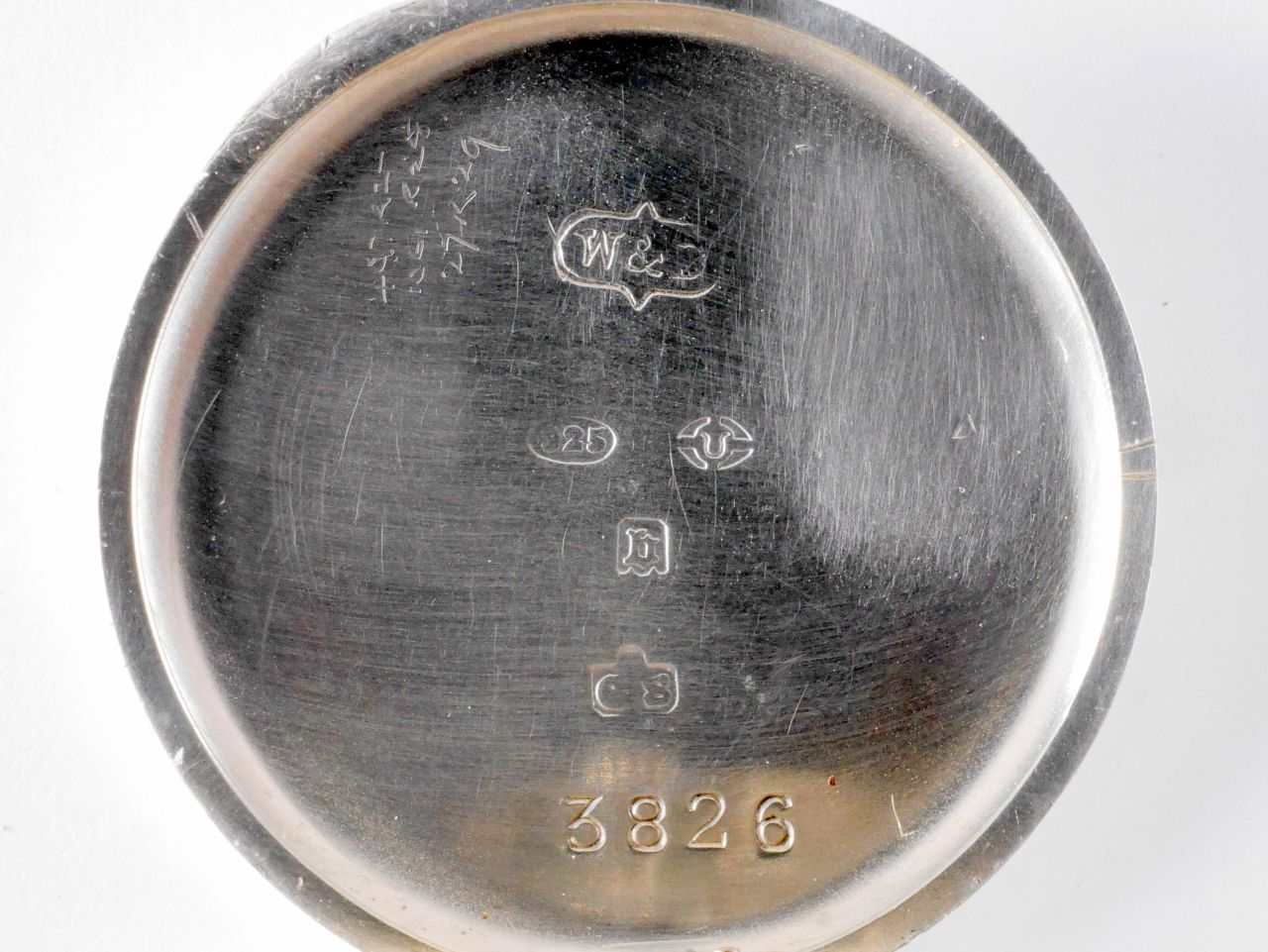 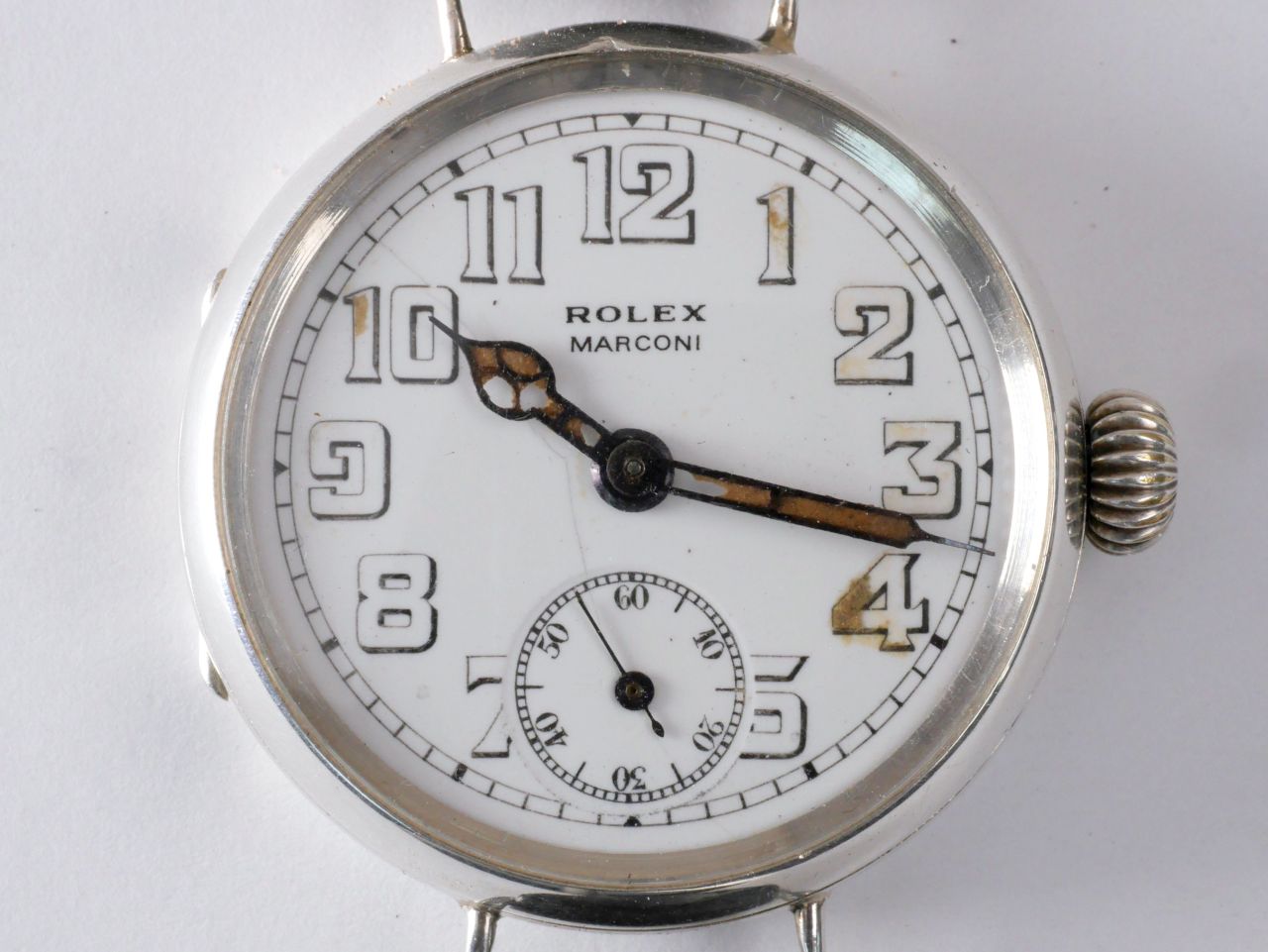 The watch is a typical trench watch, which were in great demand by newly commissioned officers heading for the front line in the Great War. It has wire lugs, an unbreakable crystal (as original but replaced) and skeletonised poire squelette hands and Arabic numerals to take radium luminous paint, of which traces remain.

The case has London Assay Office import hallmarks inside the back for sterling silver, the date letter "b" for 1917 to 1918 and sponsor's mark GS for Stockwell & Company.

The case also has a W&D mark which looks like a genuine Wilsdorf and Davis sponsor's mark. However, a second sponsor's mark in addition to the GS sponsor's mark is unnecessary, and this one is clumsily struck at an angle with a wobbly “W”,. The shield is the right shape and the mark looks like one recorded in Culme, but the low resolution of the images in Culme make an exact comparison impossible. The mark looks more like an engraving than the clear impression made by a punch; it appears to be an engraved copy of a genuine W&D punch mark which was most likely added to the case to strengthen the impression that this might be a Rolex watch. But lots of non-Rolex watches are seen with the W&D sponsor's mark, so this proves nothing. 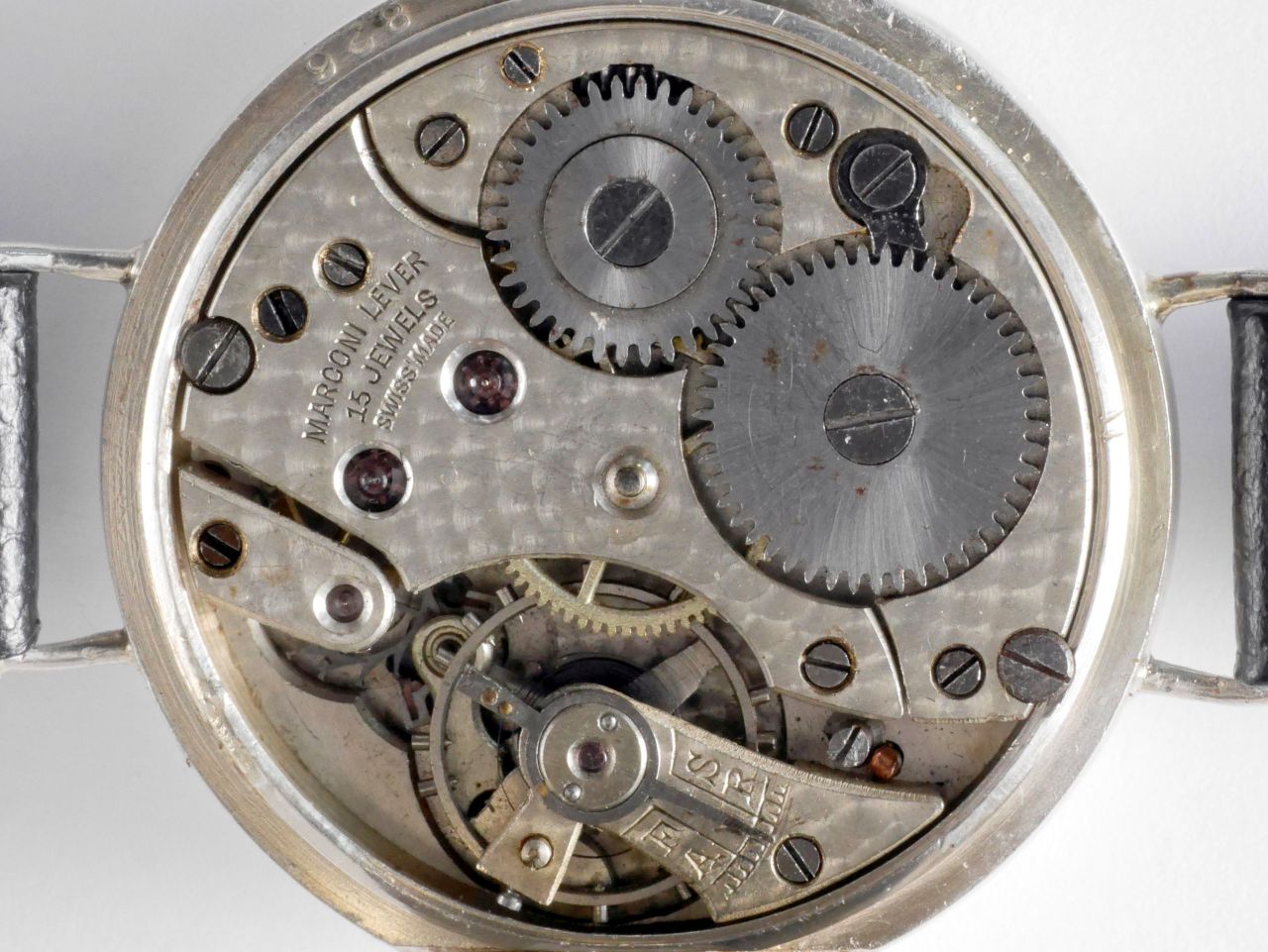 The movement was made by the General Watch Company of Bienne, originally founded by the Brandt brothers who also founded Omega.

The movement is a typical of the time Swiss split-plate movement, with a lever escapement and jewelled to the third hole for a total of 15 jewels. The balance is plain and the balance spring appears to be blued steel, so it is not compensated for changes in temperature. The screws in the rim of the balance, which in a compensation balance would be used to adjust its temperature compensation, are steel and are only there for show. Lever escapement movements were the best technology for wristwatches at the time, and this one is of middle quality; fully jewelled but not temperature compensated.

The engraving of the name “Marconi Lever” on the movement looks original to me and I have no hesitation in saying that the watch is a genuine Marconi Lever, made by the General Watch Company and sold by the Rolex Watch Company. But it is not a Rolex watch, or a Rolex Marconi watch.

The engraving of a brand name onto the movement was unusual before the 1920s. Branding of watches was something that was unusual in Britain at that period, and something that British retailers were quite opposed to. So whether this movement is from the same period as the case or actually a few years later is open to question.

The dial is enamel, which means it is made of vitreous enamel, a glass like material. The white background and the black numbers and tracks are fired at high temperature in a furnace, which bonds them together. As soon as I saw it I was suspicious that the name logo “Rolex Marconi” had been added later, which it has. This is easy to tell. 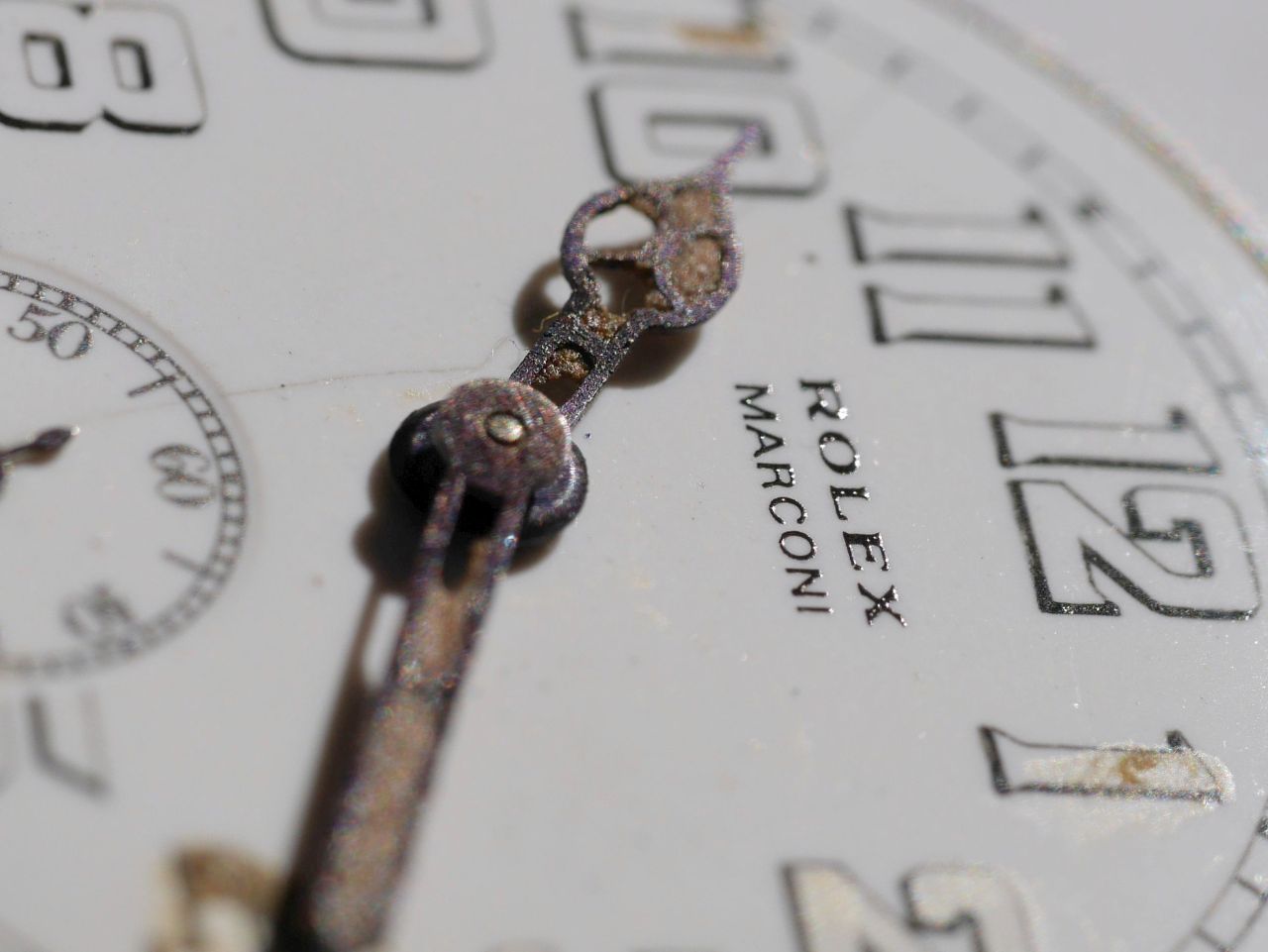 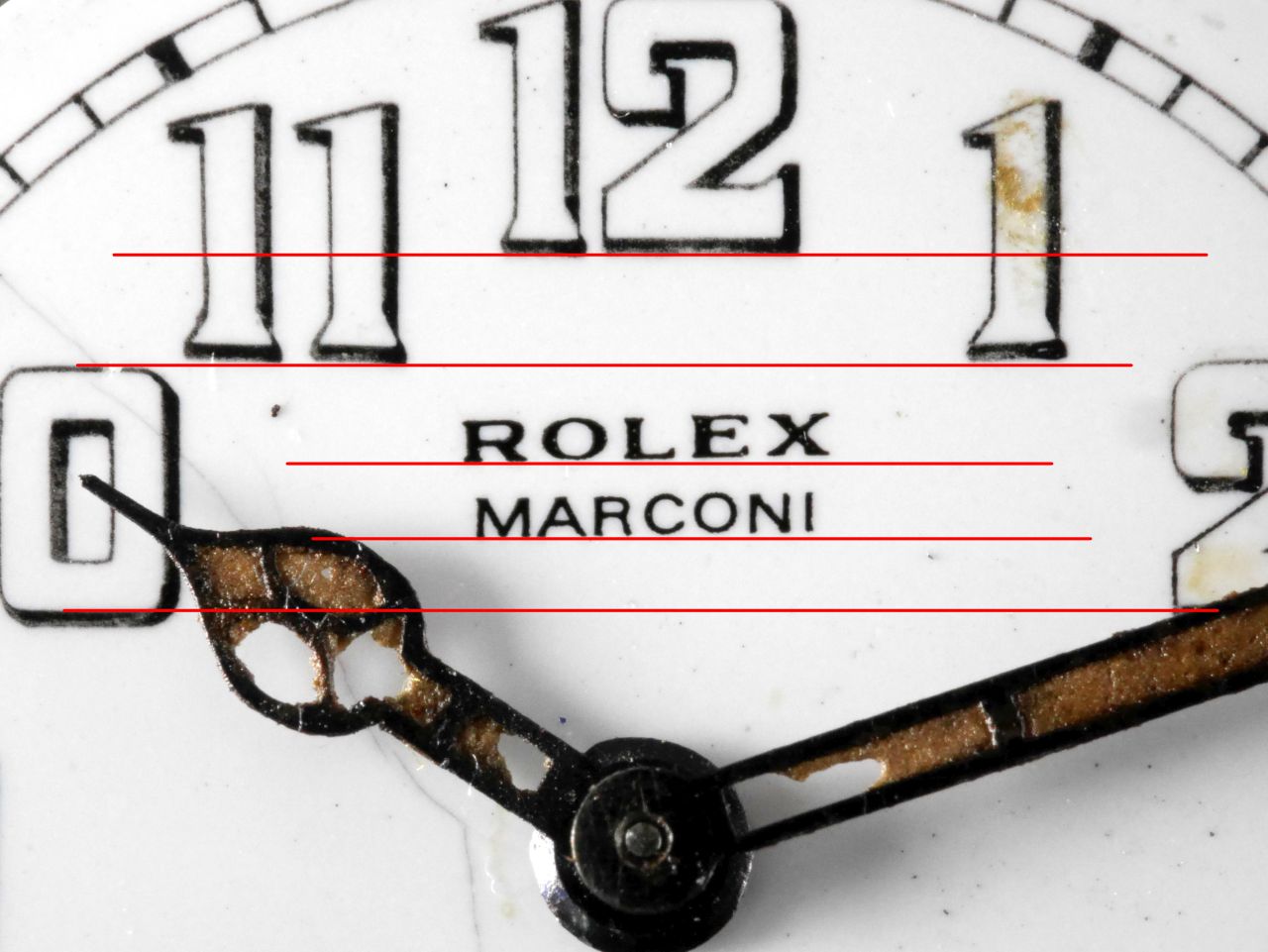 A quick look at the dial using a hand lens shows that the "Rolex Marconi" on the dial has been added quite recently in enamel paint. I have tried to illustrate this in the two pictures here, although it is not easy to show with a photograph. With the dial under a lens or microscope it can be turned to catch the light which shows up the logo as an addition to the flat enamel of the dial very clearly.

The second image was illuminated with a strong oblique light and shows how the enamel paint of the logo really stands out from the surface of the dial in a way that the fired numerals and tracks don't. See also how crisp and sharp the logo looks compared to the rusty old hands and traces of original luminous paint on the hands and numbers. Would paint applied to the dial at the same time that the hands and the original luminous paint were new really still look like that? No; genuinely old enamel painted logos dull from oxidation and dirt, and are usually flaked off partially or even nearly completely, over the intervening years, like the example shown at Fired or Painted?.

It is clear that the “Rolex Marconi” logo was added after the dial was made. How long after we don't know, but my conclusion is that someone has quite recently “enhanced” an original Marconi Lever watch. There are two reasons why I think this was done quite recently:

The “Rolex Marconi” logo is not part of the vitreous enamel dial, and was not on the dial when the watch was made. It has been added later in enamel paint, the condition of which shows that it is quite recent.

In view of the hallmark date in the case and the 1920 date for the first use of Marconi quoted by Dowling and Hess, the suspicious second sponsor's mark, and the engraving on the movement, there must be a question as to whether the case and movement started life together or whether this watch is a marriage. The dial and hands are of the correct style for the period of the case, although use of dials and hands like this continued after the war, but the engraving on the movement is unusual for the period and looks out of place.

This watch would not have had any manufacturer's name on the dial when it was new, which gives the game away even before studying it in detail. But watches like this with “Rolex Marconi” and similar legends are seen quite often. This one is clearly a fake, but are they all? I think that they probably are, that Wilsdorf would not have allowed the Rolex name to appear like this on a watch that was supposed to be sold as a completely separate brand; it was not supposed to be a “Rolex” watch, even if it was sold by the Rolex Watch Company. If you think that you have evidence to show otherwise, then please do get in touch!