The section reproduced here is from my page about Sponsor's marks. A sponsor's mark is a responsibility mark that must be impressed onto gold or silver items before they will accepted at a British assay office for testing and hallmarking. It identifies the person under whose responsibility the item is submitted for assay and hallmarking; a person who takes responsibility is one meaning of the term "sponsor". The mark is entered into the assay office records by a person or company who wishes to submit items for hallmarking, along with their details. If it is a company entering the registration, a responsible person who is one of the principals of the company, an owner or director, must be identified.

These are sometimes referred to as "makers marks", but this can be very misleading. It was never the intention that it would identify who actually made the item, which is why the term "sponsor's mark" is preferred today. This is especially so for imported items that were manufactured overseas, which were sent for hallmarking by an agent in Britain, but even in the case of British workers it can be misleading. Take for instance Paul de Lamerie, described as being the "greatest silversmith working in England in the 18th century"; he also subcontracted orders to other London workshops, striking the finished items with his own mark before sending them to be hallmarked. 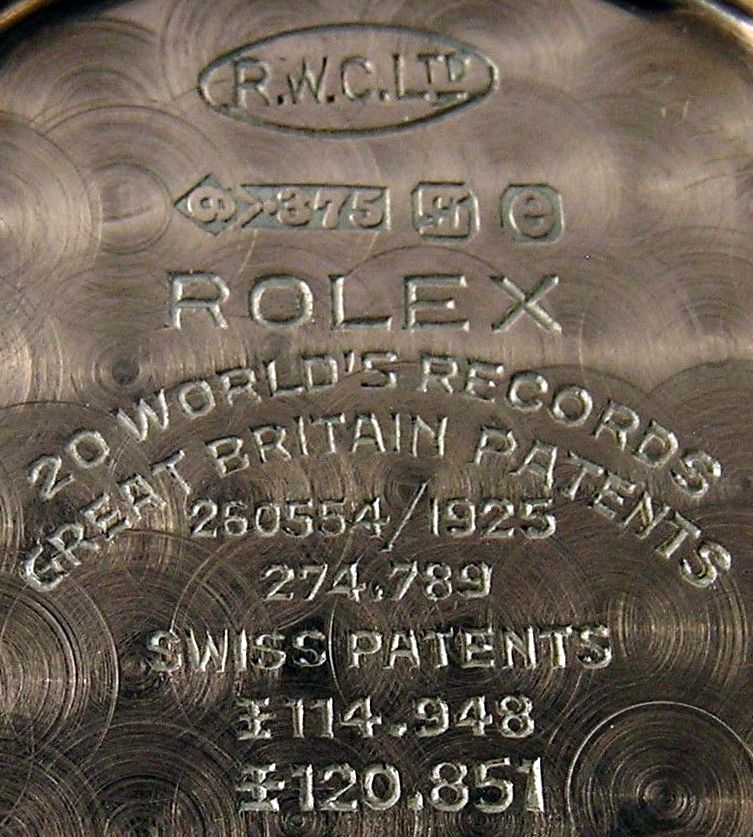 At some time the W&D sponsor's mark was superseded by the sponsor's mark “R.W.C.Ltd” incuse within an incuse oval shield. The date at which the W&D mark ceased to be used was decided by the company, is not recorded by the assay offices.

The first entry of this mark appears to be four punches with the sponsor's mark R.W.C.Ltd that were registered at the London Assay Office at Goldsmiths' Hall on 11 September 1923 by Hans Wilsdorf for the Rolex Watch Company Limited, 40/44 Holborn Viaduct, London EC.

The same R.W.C.Ltd mark was also entered at the Glasgow Assay Office, although the date of its entry at Glasgow is not recorded. The earliest Glasgow hallmark that I have seen in conjunction with the R.W.C.Ltd. mark has the date letter “a” for July 1923 to June 1924, so the Glasgow registration was most likely also entered in 1923, probably at around the same September date as the punches registered at the London Assay Office.

The instance of this sponsor's mark shown in the image here is in the case back of an early Rolex Oyster. The hallmarks below the sponsor's mark are Glasgow Assay Office import hallmarks for nine carat (·375) gold for the years 1927 to 1928 - Glasgow date letter punches were changed on 1 July each year after the election of new wardens at the end of June. Note that the RWC mark is the registered sponsor's mark, without which an item could not be hallmarked. The Rolex name beneath the hallmarks is a trademark, which is not required for hallmarking.

It seems likely that Wilsdorf registered the R.W.C.Ltd sponsor's mark in 1923 as part of his push to get the Rolex name and Rolex Watch Company more widely recognised instead of Wilsdorf and Davis. There would have been some marketing and brand recognition reason behind it, as Wilsdorf discusses in the Rolex Jubilee Vade Mecum, when he was also trying to get British retailers to accept the name Rolex on the dial, alongside or instead of their own.

Caution is needed with the initials RWC because the Replica Watch Case Company, the Roy Watch Case Company and the Rone Watch Company all entered marks with the same RWC letters. The precise form, shape and lettering of the mark are important to distinguish between these marks.

This W&D in an oval shield with points top and bottom is the sponsor's mark of Wilsdorf & Davis, importers of gold and silver wares, first registered at the London Assay Office on 25 June 1907. A second punch with the same mark was registered on 13 August. The company of Wilsdorf & Davis is better known these days by a brand name that Wilsdorf created in 1908; Rolex.

The company of Wilsdorf & Davis was founded in London in 1905. Until 1907 they would have imported watches and other silver and gold items without having them tested and hallmarked by a UK assay office, but UK law changed in 1907 and from 1 June 1907 all imported gold and silver items had to be assayed and hallmarked at a UK assay office. This is the reason for the registration of the W&D sponsor's mark. Items imported from Switzerland by Wilsdorf & Davis before 1907 would have carried Swiss hallmarks. Once the UK law was changed, the Swiss authorities allowed items to be exported to the UK without Swiss hallmarks.

The registration of the two punches on dates so close together indicates that the second punch was required to keep up with the volume of work, rather than replacing a worn out punch, so Wilsdorf & Davis must have had two men working full time punching watch cases that were to be sent for hallmarking.

The following information is gleaned from Culme

Wilsdorf & Davis are also recorded on 8 April 1915 at 15 Northampton Street, Birmingham, and also 3 Ruelle de la Fabrique, Bienne, Switzerland. They are recorded 25 August 1919 as having an office at 61 Rue Elfenau Gare, Bienne, Switzerland, in addition to their London office, and also as representatives of the Rolex Watch Co. Ltd. whose chairman was Hermann Aegler with Hans Wilsdorf and Alfred James Davis as directors and Harry Sedgley as secretary.

The same W&D sponsor's mark was entered at Birmingham in June 1909, at Chester in April 1912 and at Glasgow, although records of the date of the latter entry have been lost. These additional registrations allowed Wilsdorf & Davis additional freedom to either order items to be made outside London, or send items to be hallmarked at Birmingham, Chester of Glasgow if there were delays at one of the other assay offices, or if one office was cheaper than the others.

Although the sponsor's mark was not necessary on watch cases that did not require a British hallmark, it would have been convenient to arrange for the case maker in Switzerland to stamp the mark as the case was made. There was no reason why it should not have been stamped on watch cases that were not ultimately hallmarked in Britain, and it would have been easier to stamp all cases, whether or not they were destined for Britain. Therefore the W&D mark can be seen in watch cases without British assay office marks.